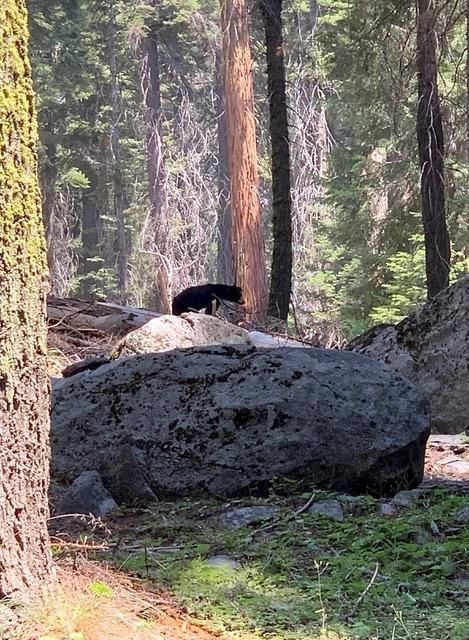 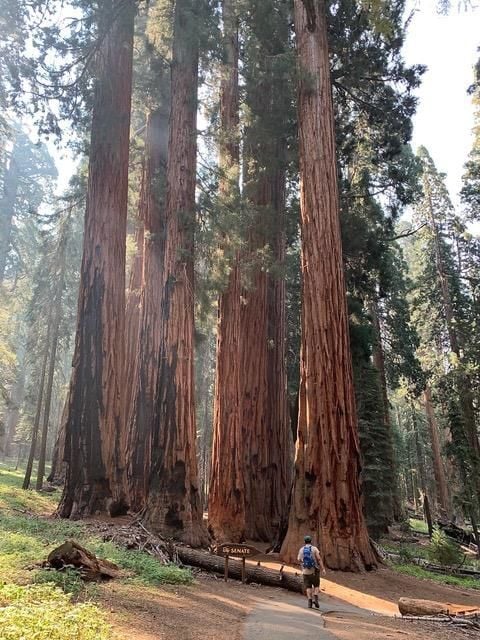 A National Park ranger approaches The Senate grove in Sequoia. 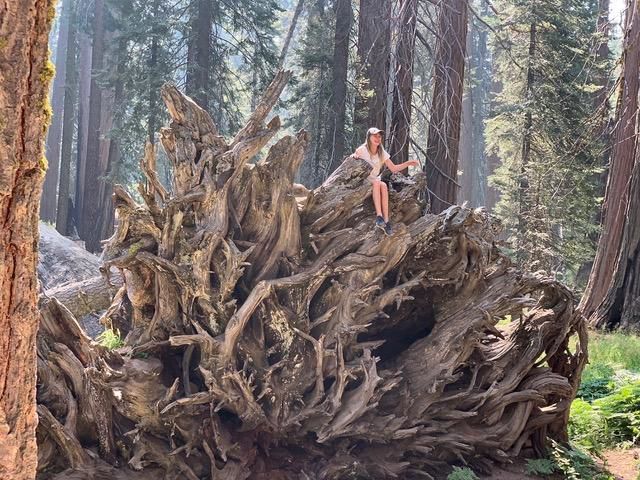 A visitor finds her way atop the root ball of a fallen tree in Sequoia National Park. 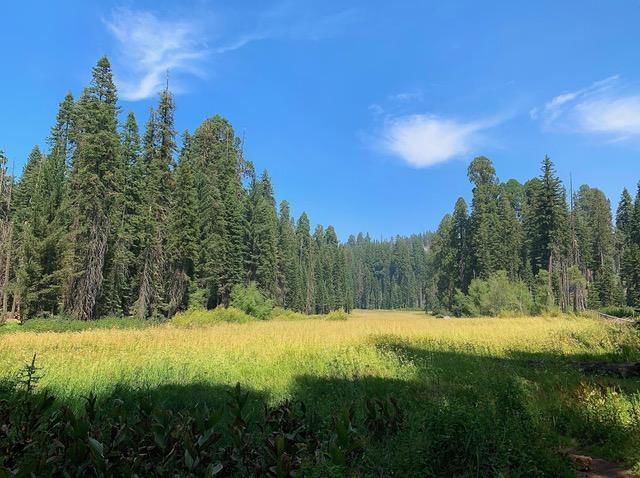 Go ahead and hug that tree. It’s OK, you know you want to. Fair warning, though; it’s kind of like eating Doritos – hard to stop.

We first visited Sequoia National Park and neighboring Kings Canyon National Park, in California’s Sierra Nevada, about 20 years ago and remembered both fondly. A road trip seemed easy enough for another short visit in 2020.

The day we left home, smoke had begun to build as the multitude of California’s lightning-generated wildfires flared. On the drive to the park through the Central Valley, then east from Fresno, air quality worsened.

As we drove up winding State Route 180 and reached the park, our hope that its 7,000 foot elevation would be above the bad air was not entirely realized. The numerous fires, a heatwave, lack of wind and summer stagnation resulted in the blurring of the park’s usual stunning long-distance views.

Although distant beauty was hampered, things up close were as pretty as ever. We also discovered that the Generals Highway, officially also known as State Route 198, was under construction between the parks, causing delays on weekdays up to one hour. That convinced us to focus on Sequoia and save Kings Canyon for a future trip.

The modern Wuksachi Lodge, completed inside Sequoia and opened in 1999, served us well before so we made a reservation for three nights. As with most park lodges in the system, pandemic-generated restrictions, including no eating in the lodge’s Peaks Restaurant dining room, were in place and well-publicized in advance. The lodge consists of a reception and dining building, and three satellite buildings, each having two or three floors with guest rooms.

A large deck was a casual and nice substitute for the lodge dining room, and the shortened menu of the restaurant was adequate for breakfast, lunch and dinner. Guests can either order ahead from their room phone or at a deck-side window and get their food soon after. The spacious deck offers gazing at deer families just over the side, keeping preschoolers occupied until the food is ready.

As we arrived at the end of the day at the lodge parking lot, we passed a welcoming committee of sorts – three large mule deer bucks with already impressive racks still in velvet. They briefly glanced at us from a distance of about 20 feet, then resumed munching on vegetation at the edge of the pavement.

Bear-proof recycling and trash containers are ubiquitous throughout the park, as are signs reminding visitors not to leave food, anything fragrant or even empty coolers in vehicles. One sign informed visitors of 34 bear “incidents” in the seven days prior to our arrival. Cell reception is virtually non-existent in the park, so visitors are spared ringtones and blather. Rather slow wi-fi is available in the buildings.

The park was established in 1890 as America’s second national park, at the urging of John Muir and others, to protect the giant trees from logging. Soon after, the park was enlarged and the neighboring General Grant National Park, later absorbed as part of Kings Canyon, was established.

Army troops from the Presidio of San Francisco protected the parks through the turn of the 20th century until the creation of the National Park Service. The parks have been administered jointly since the 1940s, and are abutted by the Sequoia National Forest, creating a protected area that stretches north to Yosemite.

Our hike the next day was on the Tokopah Falls Trail. We drove a short way from Wuksachi (the name commemorates the Wuksachi Band of the Western Mono Indians) to the open and well-stocked Lodgepole Store.

From that parking lot we walked through the adjacent campground to the trailhead, which follows the Marble Fork of the Kaweah River, passing between bus-sized boulders and gaining about 500 feet, until reaching Tokopah Falls in about two miles.

The falls and stream were trickles compared to spring and early summer when snowmelt creates roaring torrents. The calmer conditions made dipping toes in the crystalline water inviting and easy for entire families while relaxing on smooth slabs of granite. Crowds were not present, the chipmunks were speedy, and social distancing was almost effortless.

Surprisingly good pizza and green salad on the deck restored us at dinner. A short after-dinner hike near the lodge revealed empty roads, bridges, parking lots, trails and other infrastructure developed in the 1980s by the Park Service in preparation for additional future visitor capacity, so far not needed.

The next morning began with an earlier start and a quick drive to the parking lot for the General Sherman Tree, the centerpiece of the Giant Forest and a high point of any visit to this park.

A series of granite steps and a smooth paved trail lead 200 feet down from the lot to the magnificent tree, standing about 275 feet high. With a circumference over 100 feet and age estimates up to about 3,500 years, it is considered to be the world’s largest living thing by volume. One’s neck quickly reacts to the extreme craning needed to try to see the top while standing at its base.

In consideration of those not mobile enough to handle the 200-foot elevation change and stair combination, a blue zone designated parking lot sits next to the Generals Highway, a short distance below the tree.

After standing in awe for a bit, we started on the Congress Trail, meandering for several miles through the Giant Forest and spotting our first small black bear nosing for food 30 yards off the trail. Mama Bear was not around, so we believe the youngster had grown just enough to be out on its own.

A friendly ranger kept us from making a wrong turn and pointed out the Senate cluster of about a dozen towering giants within several feet of each other. Standing within the group brought a feeling of serenity, and their soft friendly bark invited human touch.

Continuing on the trail’s loop we passed the cluster of trees called the House, and several other giants named after generals and presidents, spotting another small black bear in the distance along the way.

The forest floor was dotted with sequoia cones the size of a baby’s fist, from which the giants emerge. The temptation to bring one home was blunted by the strict rules for leaving everything in place.

Returning to the parking lot, we were glad of our early start, as the trail was getting busy and the lot was filling up.

We drove another short way on the Generals Highway to the Giant Forest Museum and store. This building, with the huge Sentinel Tree immediately in front, is the remaining structure out of hundreds built among the trees right off the road in the years following the road’s opening in 1903. The grove became so developed and overused that the park service decided in the late 20th century to dismantle the development, protect the trees and replace its lodging facilities with the new Wuksachi Village in a less sensitive area.

We followed the narrow Moro Rock/Crescent Meadow Road winding uphill from the museum a couple of miles to the parking lot for the trailhead to Crescent Meadow and Log Meadow. These beautiful glades are separated by a ridge full of trees and boulders and offer open forest vistas.

Shortly after starting on the trail we stepped over a large fresh heap of berry-filled bear dung, which confirmed the answer to the age-old rhetorical question of what a bear does in the woods. Continuing along Log Meadow we arrived at Tharp’s Log, at unique use of a hollowed-out sequoia log, fitted with a bed, table, chairs, window and door by 19th-century pioneer Hale Tharp, thought to be the first Caucasian to enter the area. Continuing in a loop toward Crescent Meadow we saw our third small bear of the day at a distance, again by itself.

Back at the Wuksachi deck for early dinner, pizza and salad again won out over the offerings on the rotating special menu, a fun end to a day of several miles of hikes.

Watch now: What happens to animals during wildfires?

Travel memories: Greece and its Islands

Gerald and Jean Hasser share memories of a 2003 trip through the Greek islands.

The timeless wonder of Jordan

Editor’s note: This is the third and final part of a series the Hassers wrote about traveling in the Middle East.

The treasures of Egypt

Editor’s note: This is part of a three-part series on a trip the authors made to Israel, Jordan and Egypt.

A winter warm-up in the Yucatán

Road trips: In search of good air in California

Gerald and Jean Hasser of Napa share memories of a scuba-diving trip to the island of Bonaire.

A National Park ranger approaches The Senate grove in Sequoia.

A visitor finds her way atop the root ball of a fallen tree in Sequoia National Park.