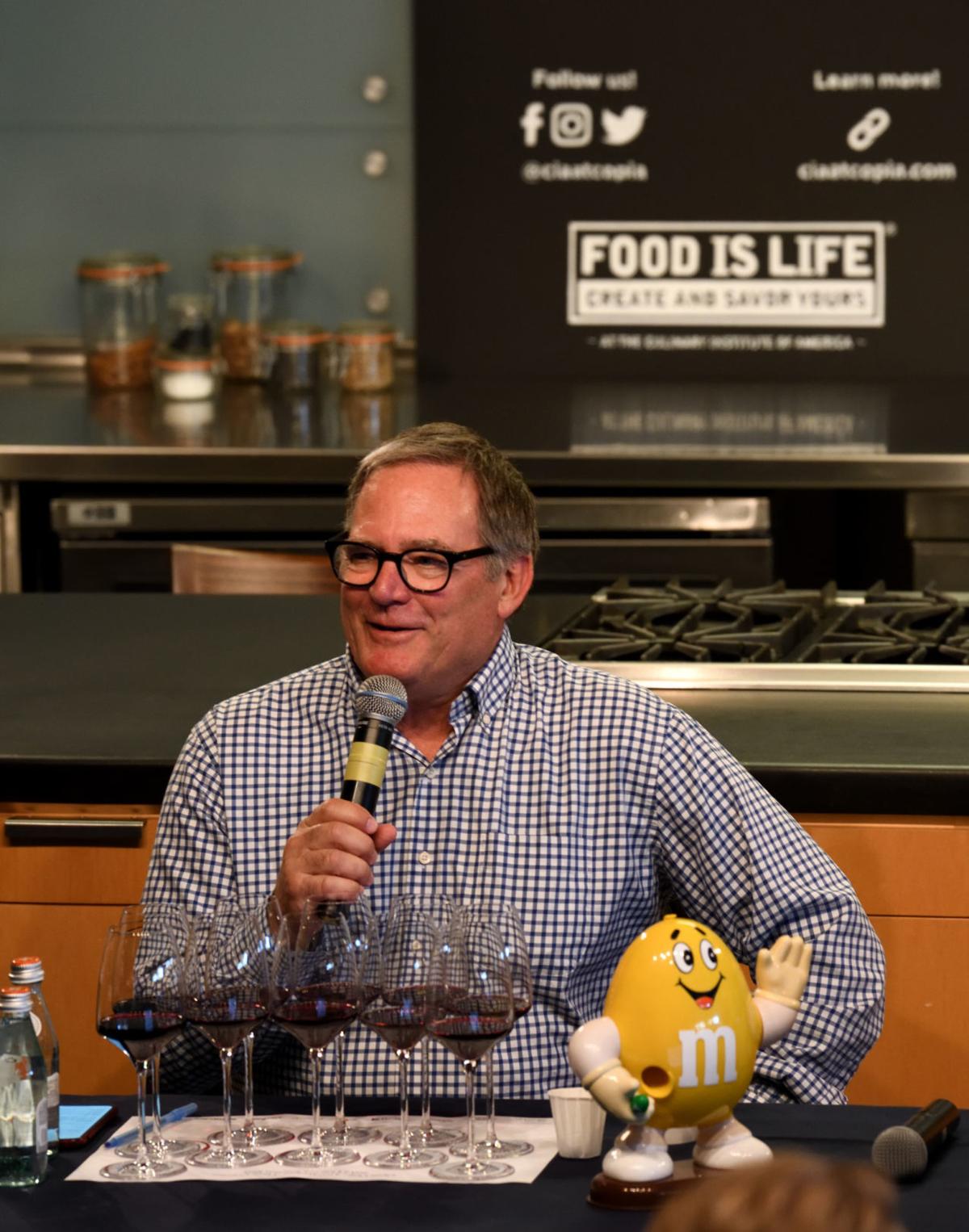 When Opus winemaker Michael Silacci led a master class at the CIA at Copia, the large M&M was his prop to demonstrate how taste works. 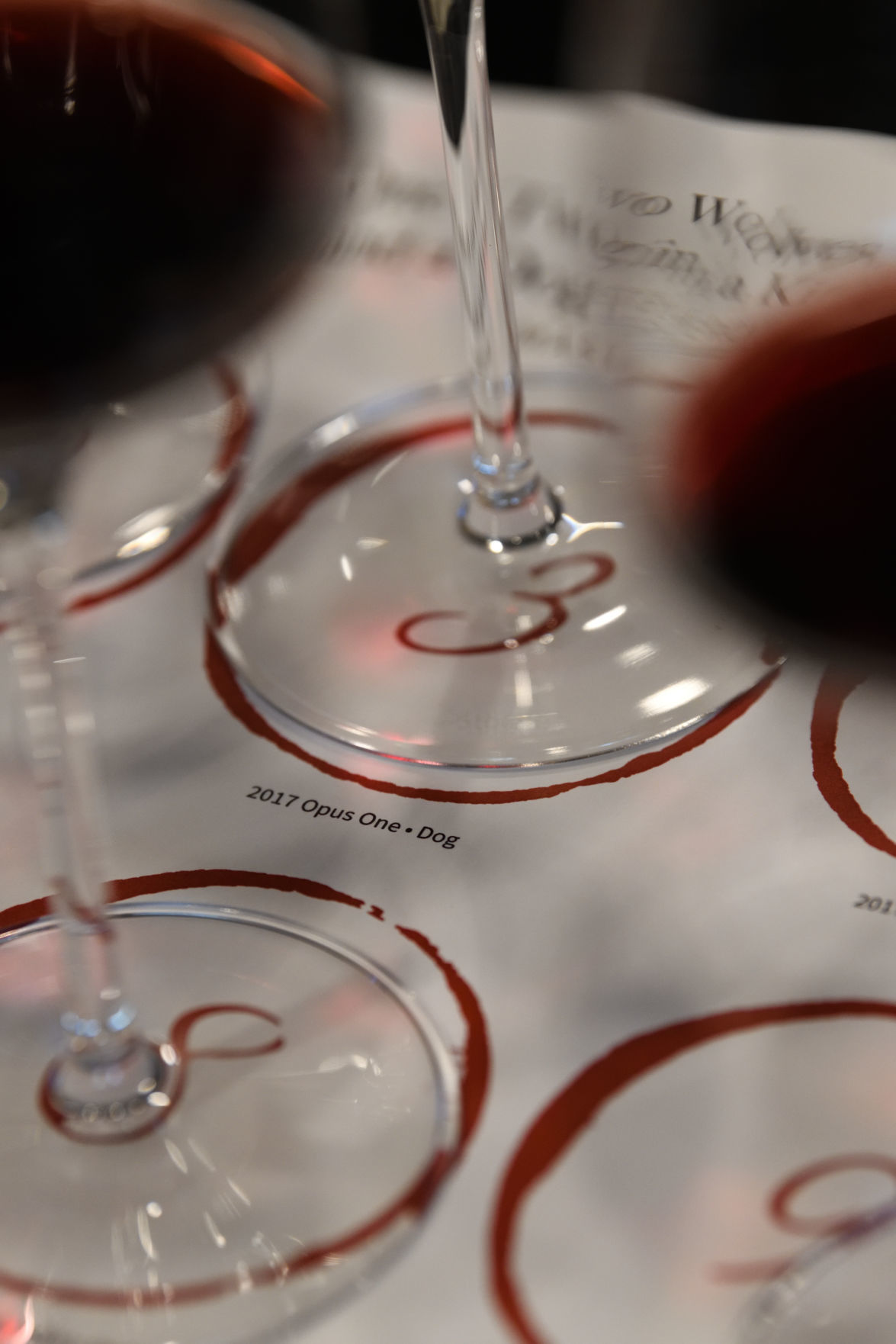 Four 2017 red wines from Opus One, each fermented with different yeasts, called wolf, coyote, and dog were in Silacci's tasting. 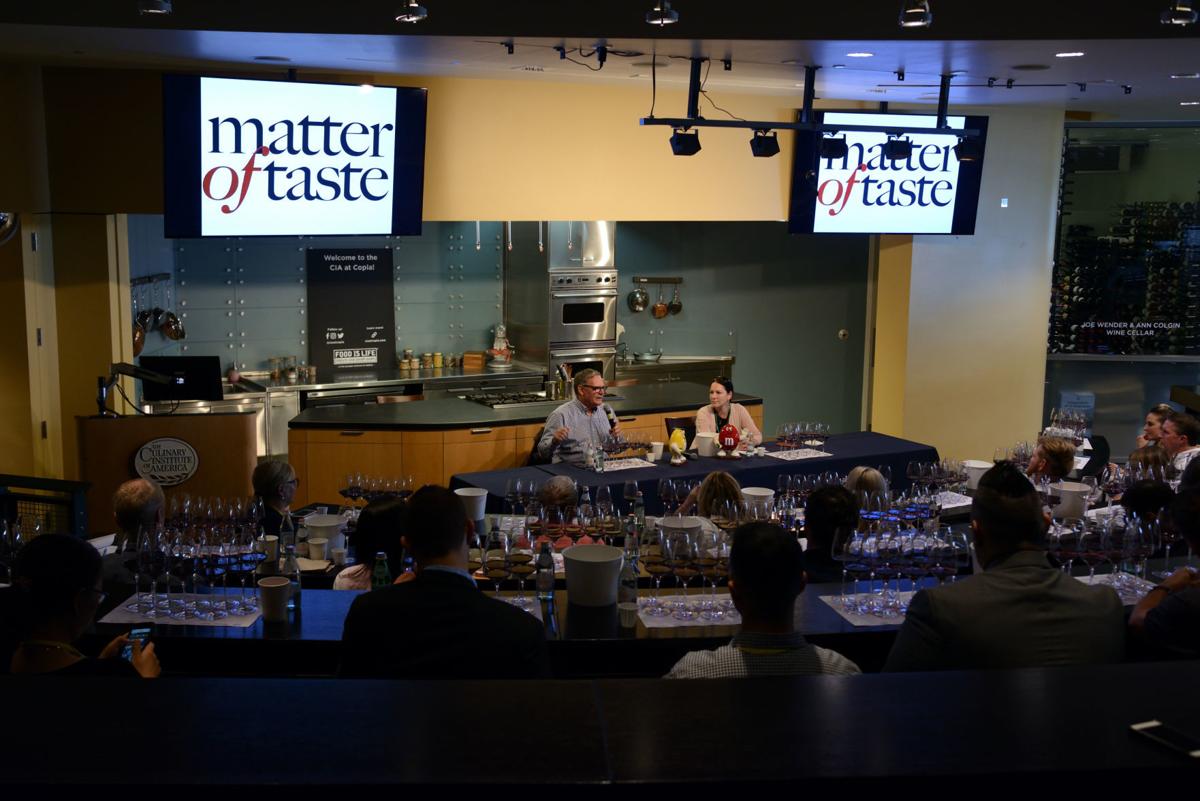 Michael Silacci, who has been winemaker at the Oakville estate since 2004, was joined by Lisa Perrotti-Brown, editor-in-chief for Robert Parker Wine Advocate, for a tasting presentation of Opus One wines at the CIA at Copia. 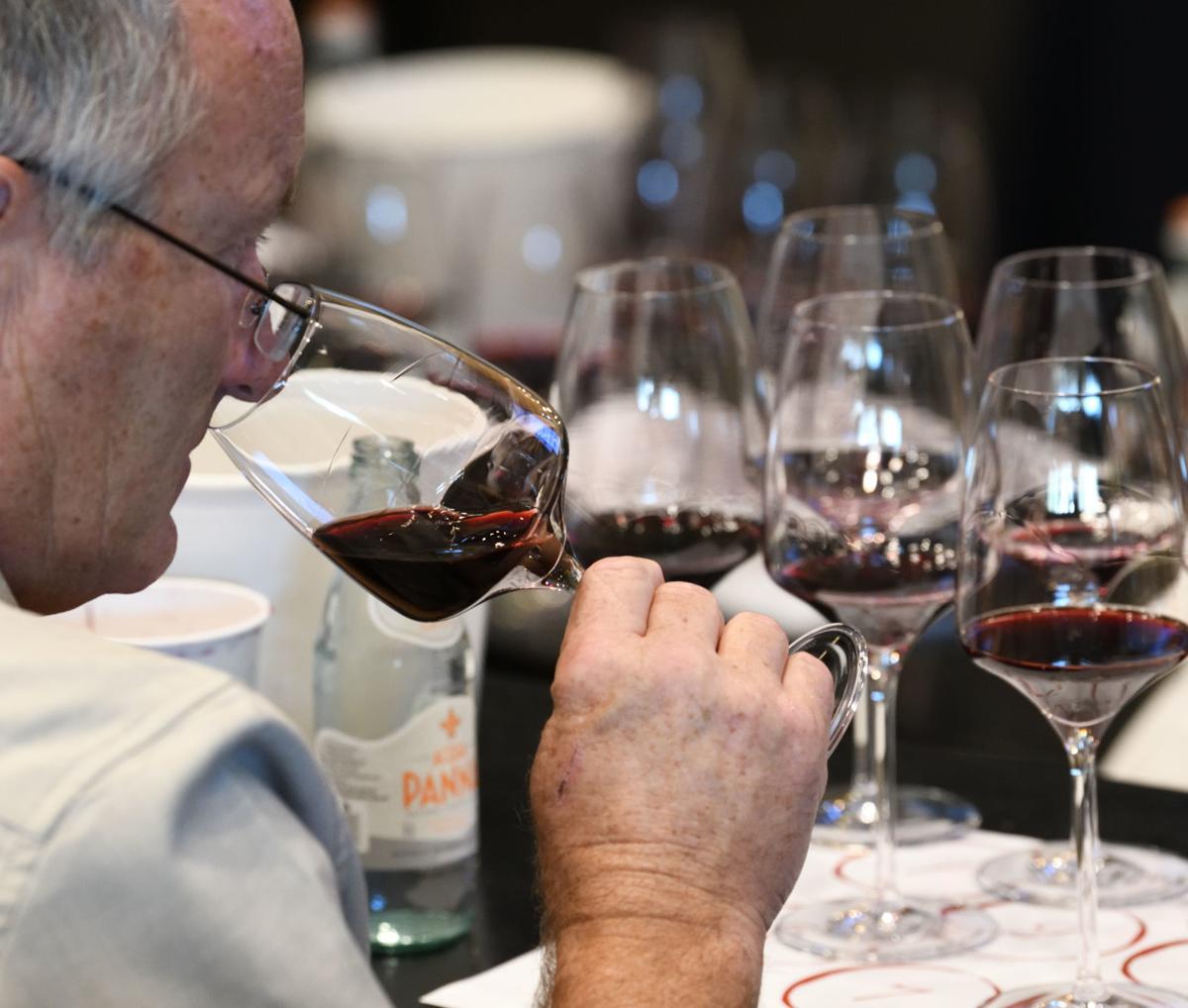 A member of the audience at the Opus One tasting.

A master class on how a Napa Valley wine is grown and produced was just one of the events in a day of activities at the CIA at Copia, but Opus One winemaker Michael Silacci’s hour-long seminar had the most unusual title: “Two Wolves, Three Coyotes and Dog in a Kitchen Sink.”

Representatives from nearly 150 wineries were on hand for Matter of Taste, a fundraiser put on by Robert Parker Wine Advocate and Napa’s Feast It Forward Foundation in August.

The Grand Tasting drew 450 Wine Advocate subscribers and their guests; and throughout the day, masterclasses provided smaller groups the opportunity to hear from growers and winemakers on topics that ranged from the terroirs of Napa Valley, to the grower Champagne movement to biodynamic farming in Washington state.

Silacci, who has been winemaker at the Oakville estate since 2004, was joined by Lisa Perrotti-Brown, editor-in-chief for Robert Parker Wine Advocate, for his tasting of Opus One wines. By the end of the presentation, the title was explained, as well as the two plastic M&M’s candy mascots sitting between their microphones.

Ten half-glasses of red wine were arranged at each place setting, to be tasted in three flights that went to the heart of Silacci’s winemaking.

The first flight clarified the “canine” aspect of the class’s title: four 2017 red wines, each fermented with a different yeast called wolf, coyote, and dog on the tasting sheet, along with the squirrel, which was explained later. The names represented characteristics in four types of yeast they’d begun to isolate several years ago from different sections of vineyards in Oakville. These sample components will eventually become part of the final 2017 Opus One Proprietary Red Wine.

“Normally you’re supposed to do these things in steps, but often you just don’t have time,” Silacci said, referring to wild yeast tests initiated in Opus One’s vineyards by a French microbiologist, Anaïs Houette-Cassous, in 2012.

A year later, during the 2013 harvest and crush, they ramped up the tests. “We sent samples of the yeast off to ETS, a lab in St. Helena, to identify them and see if they were truly wild. And we found when we got the results back that we had two wolves, three coyotes, and a dog.”

As the audience laughed, Silacci explained the canine analogy.

The wolves, which “don’t come into neighborhoods—they stay put out the wild,” were the truly wild yeasts. “Coyotes,” he said of the yeasts that shared a gene mutation with commercial yeast, “will come into your neighborhood and maybe snag a chicken or a cat for dinner out of your backyard.” More laughter, a bit nervous this time.

Meanwhile, he continued, “The dog is here as a reference point. The dog [yeast] tends to be a little bit more linear, simple, and straightforward. But, I mean, it exists because it makes great wine. So there’s nothing wrong with it.” Like most dogs, perhaps.

And wine number four, the squirrel?

The sample that Silacci said “for the last couple of years has been my go-to yeast” was discovered by a pair of interns who carried out their own yeast-collection experiment, applying scotch tape to sap on oak trees in Opus One’s vineyards. What they’d found, according to the winemaker, was a bona fide California wild yeast that one of the interns identified as “really clean, without any issues.” Sticking with the animal theme, they called it the squirrel, since it was hanging out in an oak tree.

“I’ll tell you what stands out for me in the squirrel is the texture. It’s very soft, and it’s very silky,” Perrotti-Brown remarked after tasting through her flight. “And I’m just going to say I love the wolf because of its personality. It’s got a really strong, very singular personality. You know for me, as a critic, that’s something we look for, that singularity in wines. And I love that about the wolf.”

In the flight that followed, Silacci got around to the plastic M&M’s mascots.

Next to each place setting in the audience sat a small paper cup holding three peanut M&M’s. “We usually put three in the cup, because there are people that just can’t resist,” he joked.

He asked the audience to pop one of the candies in their mouths and “just roll it around and experience how it changes.” The peanut represented the wine’s center or core of flavors, he said. “The chocolate is the texture of the wine and the shell is the structure of the wine.”

Silacci related it to winemaking. The hard candy shell of an M&M becomes rough and patchy in the mouth before it gets smoother, not unlike the changes a red wine goes through as fermentation comes to an end.

“Typically, you’ll taste the wine at the end of fermentation, and it’s really nice and rich. As you leave the wine in contact with the skins, it gets kind of rough and powdery and a little bit out of balance. Then all of a sudden you’ll start to taste it coming into a nice, round, smooth structure. It takes a couple of days and then boom, you’re there, and it’s rounder and smoother than when you first tasted it at the end of fermentation.”

Methodical M&M’s-eating, then, is “like starting from the end of fermentation until we reach that point where we want to drain and press. So, in the case of wine, we would drain and separate it from the skins. In the case of the M&M’s, you bite the peanut. That’s winemaking via M&M’s.”

Silacci moved onto the second flight of wines, introducing three barrel blends from Opus One’s 2018 vintage to discuss how a kitchen sink worked its way into the class. While two of the wines came close to what he expected would be the final blend for the 2018 Opus One, the third, named “Blend 18,” was an assemblage he and his team create every year and refer to as “the kitchen sink.”

“[It’s] a combination of every single lot that we have, press lots and everything, in proportion. So that gives us a big picture of the vintage,” he explained. “You can sometimes be like a racehorse, you know, and kind of get tunnel vision. So we need to have something that pulls the blinders off and gives us the big picture, and that’s the kitchen sink.

“The other direction we go in is starting from the base and tasting all of these lots and giving them rankings of one, two, or three. Then we look at the average ranking of our winemaking team, and we start to build from the base blend up. We kind of wait until we get to something where we feel we’ve reached the final blend from both directions.”

At this point, Silacci shared a bit of dark humor. He’d returned the evening before from Switzerland, where his grandparents were born and where he has family. While there, he rode in a train tunnel a couple of kilometers below ground, a testament to Swiss ingenuity.

“My grandfather would say there would be two engineers, one starting from the south, and the other from the north, just for an example. And if they were off by one centimeter, they would commit suicide. That’s the way we feel if the two blends don’t meet, and they’re not perfect.”

The audience laughed, somewhat anxiously. “So far we have a good therapist at work, and we haven’t lost anyone yet,” Silacci laughed along with them.

The final flight was composed of three outstanding vintages of Opus One, the 2005, 2007, and 2010. The 2010 vintage is Silacci’s personal favorite, but the ’07, as he noted in a follow-up conversation in his winery office, was maybe the most surprising.

2007 was a famously warm vintage. Expectations today for any Napa Valley Cabernet from that year would be managed. But the wine was delicious, showing vibrant acidity and good structure. “We don’t acidulate,” he said, “so we have to get the acidity from the grapes. We tend to begin picking a little bit earlier than most people.”

“I wanted to be surprised by Michael and see what he was going to present in terms of the wines and the blends,” Perrotti-Brown said in a phone conversation the following week. “It met all my expectations.”

“I wanted to go on the journey, too. Because sometimes I go into these events, and into these masterclasses and, you know, I come away learning as much as anyone in the crowd. That’s the wonderful thing about wine.”

At the beginning of his presentation, Silacci talked about there being three kinds of wines made today: those that reflect the personality of the winemaker, wines made consistently, year after year, in a house style and a third, which he discussed at length as he opened the masterclass: wines that show time and place. Tasting through the trio of Opus One library wines, it wasn’t hard to see which style aligned with Silacci’s.

“We see [time and place] more as a classic wine, where you shouldn’t be able to see my footprints in the vineyard, nor my fingerprints on the glass,” he said. “I’m not talking about minimalist, where you just let whatever happens happen. But trying to help guide the fermentations and the blending to make a wine that reflects the place.”

“So time is reflected by flavors and aromas. And place is reflected in the mouthfeel, the texture, the structure of the wine. That’s where we try to respect the place, the expression of place every day. But time can go wherever it needs to go.”

Malick Koly was child drummer in West Africa and France, then a budding music student and transplant to Napa Valley, and now he is a busy drummer in New York.

When Opus winemaker Michael Silacci led a master class at the CIA at Copia, the large M&M was his prop to demonstrate how taste works.

Four 2017 red wines from Opus One, each fermented with different yeasts, called wolf, coyote, and dog were in Silacci's tasting.

Michael Silacci, who has been winemaker at the Oakville estate since 2004, was joined by Lisa Perrotti-Brown, editor-in-chief for Robert Parker Wine Advocate, for a tasting presentation of Opus One wines at the CIA at Copia.

A member of the audience at the Opus One tasting.