To paraphrase what a winemaker friend once told me, “The art of winemaking is to harness a wine’s complex components into a seamless, harmonious expression where none dominates the other. Yet, it is only through a respect for the science behind winemaking that this goal can be achieved.”

Although wines have been produced globally for millennia, the term “winemaker” is relatively new and used primarily in the New World with no direct translation to most European languages. In the Old World, winemaking has been considered a part of the overall process from vineyard to bottle and not merely the influence of a specific individual in the winery.

In France, the closest terms related to winemaker are maître de chai (e.g. cellar master) or chef de cave as he is known in Champagne. Both are meant to convey the concept that this person is the head of a team making wine and not just an individual solely responsible for the cellar or process. In the New World, the concept of the “team” leader seems to have morphed into an individual’s role as a winemaker despite the historical connotation.

Although a winemaker’s role is often compared to a chef’s, I have long observed a distinct difference since the winemaker is solely dependent on the grape as the base ingredient, whereas a chef has a far broader ingredient selection at his disposal for each preparation.

A chef is truly a “creator” sourcing many individual ingredients and skillfully blending them to fashion a dish that until the final moment, may have existed only in his imagination. A winemaker on the other hand, is dependent on the “fruit of the vine” as the base ingredient and must rely on enthusiasm, experience, technique and vision to “shepherd” the fruit, with all its nuances. from vine to bottle.

Coming from a scientific background myself, I’ve always appreciated the intricate and subtle ways science and art – two seemingly disparate values – can meld into the creation of wine. While the lines may often seem blurred, the basic elements are always there. I decided to delve into this a bit further through the eyes of several highly respected and talented professionals who have honed their skills on somewhat different paths.

He appreciates the team effort in the winery especially when it comes to tastings and blending but feels, “It’s the team leader’s (i.e. winemaker’s) decisions that breaks all tie votes.”

The conditions in the Salta Provence of Argentina (Colomé in particular) exhibited some similarities to Mt. Veeder and Hess (elevation, cool weather and aspect). Yet, there is also a striking difference with Salta’s extremely dry/arid climate and only 4 inches annual rainfall.

Randle’s experience with many “under-the-radar” and heritage varieties has always been a fulfilling venture. But he does say, “They require an extra measure of vision, persistence, perseverance and persuasion.”

Having enjoyed many of these wines over the years, I can only say thank you for the extra effort!

Ana Diogo-Draper is director of winemaking for Artesa (the U.S extension of Spain’s Raventós Codorníu group) in Carneros and has the advantage of having worked in both the New and Old Worlds. She graduated from the University of Evora in Portugal with a degree in agricultural engineering and always knew she wanted a career in agriculture. Then she took a class in winemaking and connected with her professor’s passion on the subject saying, “I was hooked from Day 1.”

Ana worked in Portugal for a time and then decided on an internship in Napa. “I loved all the possibilities that existed for women in California, so different from my experiences in Portugal.”

During this time, she also began to appreciate the higher level of collaboration between California winemakers than those in Europe along with increased levels of experimentation.

During her five-month internship, she fell in love with California and missed Napa terribly when she returned to Portugal to finish her thesis. The following year, Ana eagerly accepted an invitation to return to Napa, thinking it would be for year or so. “But once here, I never left.”

Ana is responsible for managing all production crews, working on grower relations, managing the estate vineyard and is in charge of all harvest logistics. In short, she’s responsible for all winemaking (both still and sparkling) from vineyard to bottle. Harvest is her favorite time of year. “I love the alchemy of it, the overwhelming range of possibilities and when I just need inspiration, I love [going] into the vineyards, assessing what the vintage might look like and daydreaming with anticipation about the vintage ahead.”

Ana sees herself in the Old World model of a team player and is careful to point out the importance of her role as part of that team. “You can be an amazing winemaker, but if you can’t inspire and motivate your team, you will never be able to achieve what you envision for your wines.”

Scott Harvey is owner/winemaker for Scott Harvey Wines in Amador. As a European trained winemaker, he began his career in 1979 and is considered (among other accomplishments) a king-pin in establishing Amador County in the Sierra foothills as an internationally respected growing area.

Scott appreciates varietal diversity and takes pride in producing wines that, “Tell the story of variety, place and vintage.” He is thankful that, “California has so many wonderful wine flavors with the different areas, varieties and climates that an excited winemaker can have so much fun.”

Passion is a key component in Scott’s methodology and suggests that “A good winemaker has to be in love with making wine… If this excitement does not exist, he or she will have a hard time creating a product that will sell.”

He also sees the advantage of reaching out to the consumer with hopes that his excitement is further transmitted to them by the wines he produces.

Scott expressed an interesting view on the roles played by art and science in winemaking. “Science demonstrates the winemaking team’s application of lessons learned and knowledge gained over thousands of years and quantified in many respects by Louis Pasteur with his work on fermentation science. While art showcases the winemaker’s ability to trap the entire story of the grape’s journey from vine to wine as expressed in the glass for us to enjoy.”

A great part of a wine’s allure is the challenge in accurately separating the influences of art and science, for at every step both are intertwined in the decision making process. Beneath each manifestation of art and spirit lies an influence of science.

Watch it now: A wine lover’s guide to beating the heat

0:29 A wine lover's guide to beating the heat

Wine actually appeals to all five senses and taste is typically the third, or in some cases the fourth, we encounter.

Allen Balik, The Wine Exchange: A time to chill

Serving wines in summer -- what is "chilled" and what is "room temperature"?

Readers weigh in on the topic of diversity and choice in wines.

Can you imagine picking-up a restaurant’s wine list only to find a selection of Cabernet Sauvignon and Pinot Noir for the reds along with Chardonnay and Sauvignon Blanc representing the whites?

Allen Balik, The Wine Exchange: Wines for summer and the 'new normal'

On Sunday afternoons, Allen Balik gather at the end of their cul de sac with wine glasses and, while maintaining strict social distancing, enjoy a bit of wine together while toasting the week past and the one ahead.

Allen Balik, The Wine Exchange: Getting to know the 'Masters'

What is the difference between a Master Sommelier and a Master of Wine?

Only a small fraction of wine is cellared and aged by relatively few collectors. But the reward of that cellaring can be a warm welcome message to those who enjoy and appreciate the character of a properly aged wine.

What are the benchmarks of wine? Allen Balik proposes "the three Vs."

Allen Balik explores the wines of Montalcino at a tasting with winemakers from Tuscany.

In an effort to broaden the vineyard’s role in combating climate change, an increasing number of growers worldwide are adopting practices that minimize carbon release and enhance carbon sequestration in the soils.

Allen Balik, The Wine Exchange: Blending: The artistic side of winemaking

All wines are blended to some degree, even if the wine is 100 percent one variety or 100 percent from a single vineyard. In these cases, blends are created from a variety of fermentation vessels and barrel types, vinification and aging protocols, vineyard blocks, pick dates, vintages or other component influences.

Allen R. Balik, The Wine Exchange: What does wine mean to you?

Allen shares the responses to a question posed at an online wine meeting: What does wine mean to you?

The term, “sustainable farming” covers a broad range of practices that are not only ecologically sound but also economically viable and socially responsible.

Will climate change cause Napa Valley to turn to other varieties than Cabernet Sauvignon? A panel of wine professionals caution that flexibility may be key to keeping the Napa brand powerful in the next 25 years.

Allen Balik, The Wine Exchange: Looking back over 10 years

Napa Valley wine writer Allen Balik reflects on the changes in the industry he's seen in the past decade, including the effects of millenials and climate change. 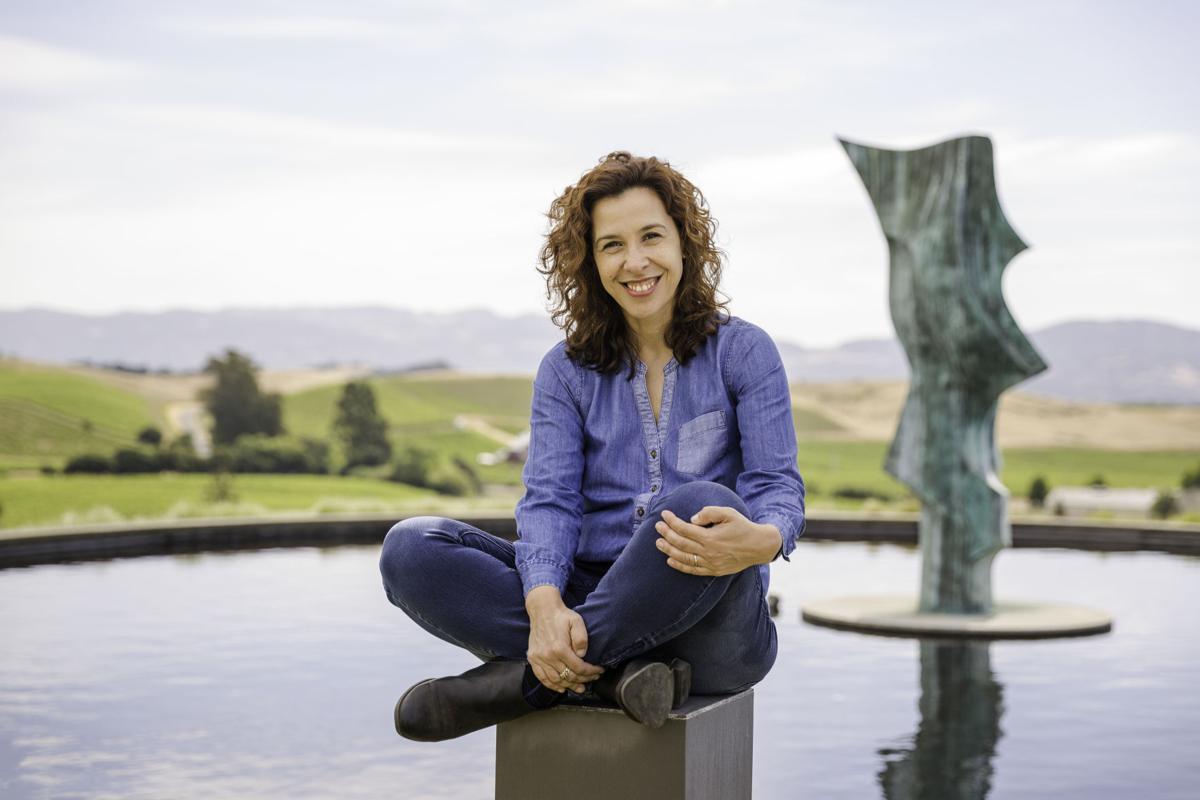 Ana Diogo-Draper is director of winemaking for Artesa.