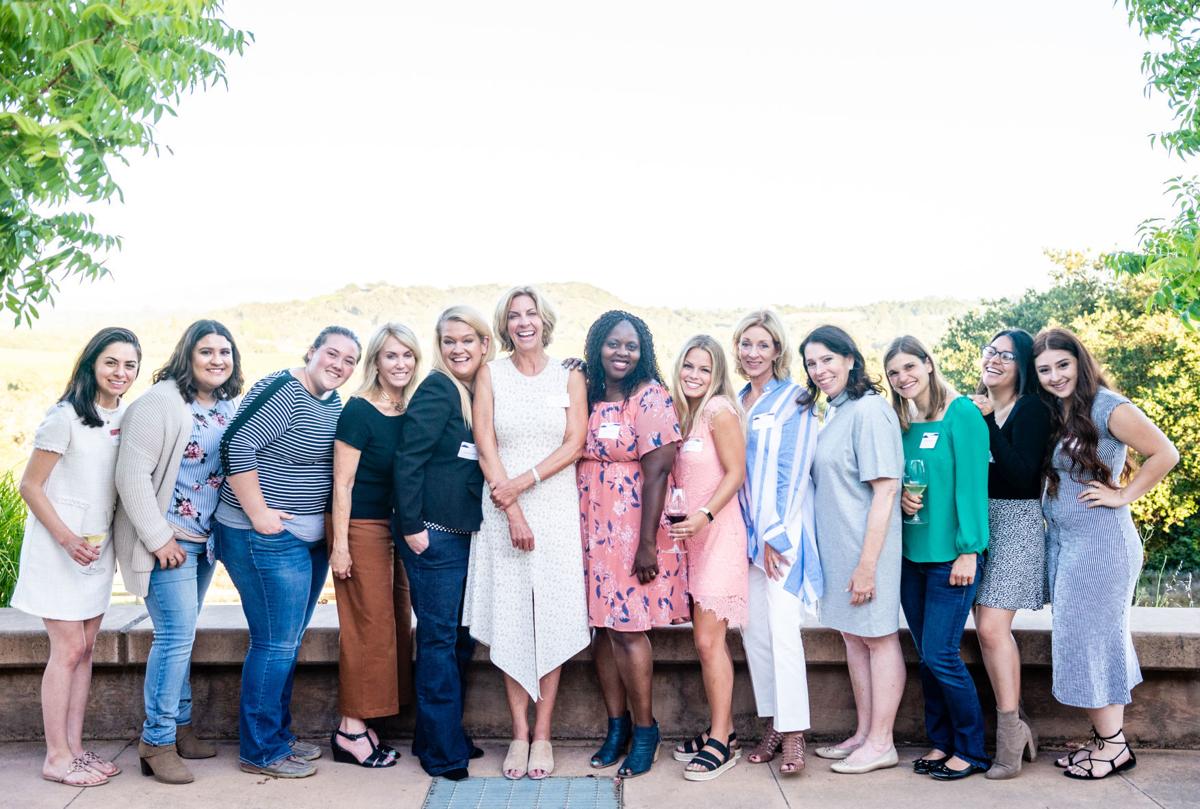 According to the Merriam-Webster Dictionary, geodesy is “a branch of applied mathematics concerned with the determination of the size and shape of the earth and the exact positions of points on its surface and with the description of variations of its gravity field.”

Having studied geology at Stanford University, Judy Jordan took inspiration from this measurement tool for her Geodesy Wine.

Raised in the wine industry, Jordan launched J Winery, her sparkling wine brand, in 1986 at the age of 25. After building a successful brand that received acclaim from wine critics, Jordan sold J Winery in 2015 to E&J Gallo.

Selling J Winery was not the end for Jordan, but rather the beginning of a new, inspired project. With a belief that social change can be “accomplished through strategic philanthropy and flexible investments”, she combined her knowledge of geology, business and winemaking to create a business that mentors and supports women in the agricultural community.

In 2016, Megan Baccitich joined as the winemaker for Geodesy. Raised in Sonoma County, Baccitich knew at an early age that she wanted to work with wine, although her parents were both teachers, who did not work in the industry.

While bussing tables in local restaurants in high school, she met many people from the local wine community. She went on to study at Santa Rosa Junior College and Fresno State, getting a degree in enology. Her first job in wine was as the assistant winemaker at Taft Street Winery, a small family-owned winery and custom crush facility in the Russian River Valley where she worked with luminaries such as Mary Edwards, Carol Shelton and Jill Davis.

Next Baccitich worked with Paul Hobbs for 10 years where she started as the associate winemaker and ended as the director of winemaking. Joining Jordan at Geodesy is the first time that Baccitich has worked for a woman-owned business. “Working for Judy is amazing,” she said. “It is a feeling of coming home. There is a culture of openness, respect, mindfulness and gratitude. And it is a very collaborative and creative process.”

The wines of Geodesy are site-specific, terroir-driven wines. Rather than working with micro-parcels, Baccitich looks at each vineyard as complete color palates. With different soils and aspects within each vineyard, the possibilities are endless.

The Sage Ridge Vineyard in Napa Valley is 60 acres overlooking Pritchard Hill planted to Cabernet Sauvignon, Merlot and Cabernet Franc, as well as Petit Verdot, Malbec, Syrah, Zinfandel, Chardonnay, and Sangiovese. The Cabernet Sauvignon-based red blend spends 20 months in oak and is then bottled aged for one year. The first release of the Sage Ridge wine was the 2016 and it retails for $175 per bottle.

The Chehalem Mountain Vineyard was first planted by Dick Erath prior to the establishment of the Chehalam Mountains AVA. Located in a forested mountainous area, the maritime influence and intense diurnal swings produce thick-skinned grapes and richly textured wines. The Eola Springs Vineyard on the north side of the Willamette River was also planted prior to the establishment of the Eola-Amity Hills AVA. In contrast to the Chehalem Mountain Vineyard, the Eola Springs Vineyards has rolling contours, complex geology, and cool breezes from the Van Duzer Corridor resulting in bright and acidic Chardonnay and Pinot Noir. Both vineyards produce one Chardonnay and one Pinot Noir, each retailing for $75 per bottle. 2017 was the first vintage for the Oregon wines.

Geodesy produces only 750 cases of wine each year, but 100 percent of the profits support the WG Edge program, the foundation Judy Jordan established with the sole purpose of empowering the next generation of young women.

WG Edge stands for Women Getting an Edge in Ag. A local leadership development program for young women pursuing agricultural and natural resources careers, WG Edge offers up to $15,000 in scholarship awards towards their studies at Santa Rosa Junior College. In addition, WG Edge provides a mentoring network of teachers that include local female leaders as well as internships to guide, inspire and open doors.

Jordan, with her team, has created a fully integrated system in which each part of the business contributes to the whole of the business. Capra Vineyards is the management company of the three vineyards owned by Judy Jordan. These three properties help to underwrite the nonprofit training and mentorship programs for young women. Geodesy is the brand that funds the foundation, and WG Edge is the foundation. Each bottle purchased has a direct impact on the next generation.

Geodesy is supporting the agricultural community and women, one bottle at a time.

Allison Levine, Please The Palate: Joel Aiken and Scattered Peaks -- the story behind the name

Imagine the moment when the waves in the ocean approach the shore and split, creating different wave peaks. Imaging flying over snow-capped mo…

Allison Levine, Please The Palate: B is for Bubbles -- and Bollinger

During the confusion and panic of the coronavirus epidemic, Allison Levine recommends relaxing with a glass of Bollinger Champagne.

Allison Levine, Please The Palate: A lot of beer makes this wine

It's said it takes a lot of beer to make good wine. In the case of Kim and Andrew Busch, founders of Folded Hills Winery in the Santa Ynez Valley, that would be the beer of the Anheuser-Busch.

Musicians Jon Bon Jovi and John Legend partnered with well-known French winemakers to show that wine and music do go together.

Allison Levine, Please The Palate: Have you found your way to Chardonnay?

Allison Levine, Please The Palate: Changing the image of Bordeaux

The philosophy of Gérard Bertrand from the Languedoc region of France is to be in harmony with nature and l'art de vivre, which is reflected in his wine.