If life was normal right now and we were out and about, I would have just returned from a weekend in Paso Robles having attended Hospice du Rhône.

This year would have been the 20th anniversary of Hospice du Rhône. An event that takes place every two years in Paso Robles, it draws Rhône wine lovers from around the world for what many consider to be one of the best wine festivals. And it is one of the best because of the people, the wines, the content and the overall relaxed and friendly vibe.

While we could not travel to Paso Robles, the Hospice du Rhône team, winemakers from around the world and more gathered on Zoom for a Virtual Cheers to celebrate the wines, the people and the regions that embody Rhône varieties. In just under two hours, they created a modified version of what we would have been enjoying had we been there in person.

And that is how the virtual hour began.

During the welcome, John explained that during his time at home, he has had time think about the role Rhône wines play in the world of wine. Surrounded by family, he drew a similar comparison. John described Rhône wines as the middle child in the family. He sees Bordeaux is the older child, the one with a strong sense of entitlement who “even has a piece of paper declaring its right to everything.” He sees Burgundy as the baby of the family, the one that can do no wrong. She is the darling and she gets away with everything. He said, “The harshest statement she will ever hear is ‘Well, that’s the vintage.’” And Rhône is the middle child. John explained, “We’re reliable. We’re there for you. We don’t disappoint. AND when you sit down to dinner, we get along with everything and everyone.”

It started with Jeb Dunnuck (jebdunnuck.com) who discussed the Walla Walla, WA 2018 vintage with winemaker Christophe Baron of Horsepower Vineyards and Cayuse Vineyards.

The discussions were just a taste of what we would have experienced at Hospice du Rhône but what was shared by all who spoke was their love for each other, their passion for Rhône grapes and their affection for Hospice du Rhône.

Sondra Bernstein expressed it the best when she explained that “these past 20-some years with Hospice du Rhône have been so incredible to us and I think when I see everybody on the screen, it’s because of the relationships that we have made more than the crazy partying or the drinking or the finding new wines, but it’s the friendship that I can say I have had for over 20 years.”

Anne-Charlotte Mélia Bachas added, “Hospice du Rhône is one of my favorite places in the world.”

After two days of seminars and walk-around tastings, Hospice du Rhône usually ends with a farewell dinner with live music. And that is how our virtual cheers ended, with live music from Mark Adams of Ledge Vineyards and the Mark Adams Band.

While I could not physically attend Hospice du Rhône this year, I felt like I was there in spirit. And you can too, as the entire Hospice du Rhône Virtual Cheers was recorded and can be found at HospiceduRhone.org.

But I know where I will be April 23-24 in 2021, physically in Paso Robles celebrating the reliable and delicious Rhône wines at Hospice du Rhône.

Musicians Jon Bon Jovi and John Legend partnered with well-known French winemakers to show that wine and music do go together.

Allison Levine, Please The Palate: Have you found your way to Chardonnay?

Allison Levine, Please The Palate: Changing the image of Bordeaux

Allison Levine Please the Palate: A world of sparkling wines

Champagne comes only from the French wine region, Champagne, but there is a world of other sparkling wines to discover.

The philosophy of Gérard Bertrand from the Languedoc region of France is to be in harmony with nature and l'art de vivre, which is reflected in his wine. 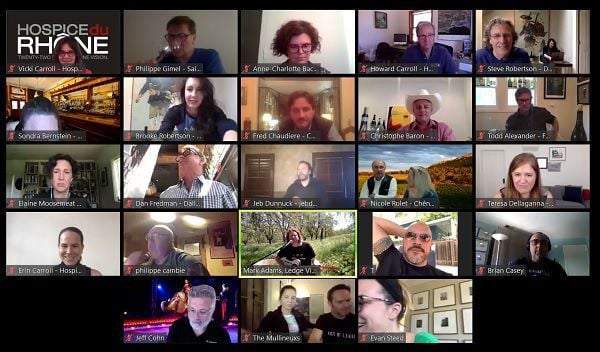