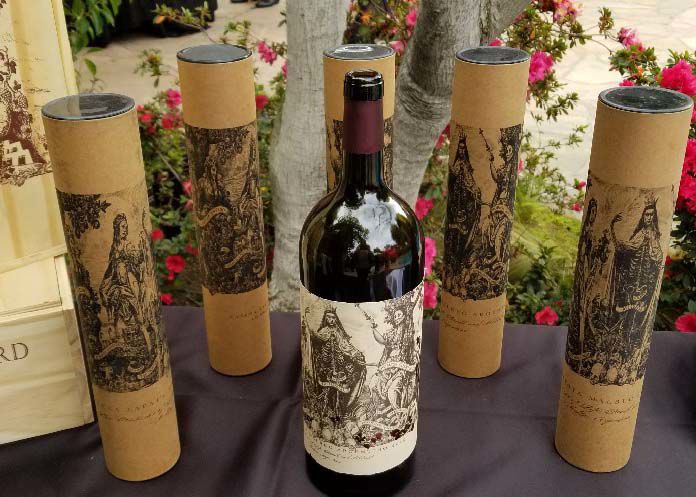 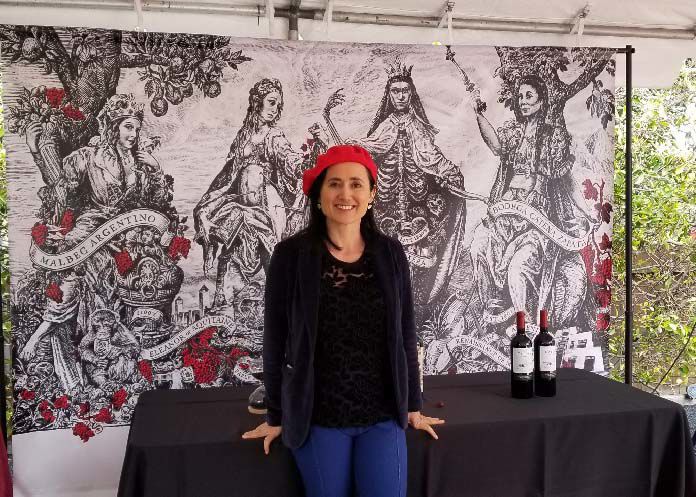 Laura Catena – Laura Catena stands in front of a large image of the Malbec Argentino label. 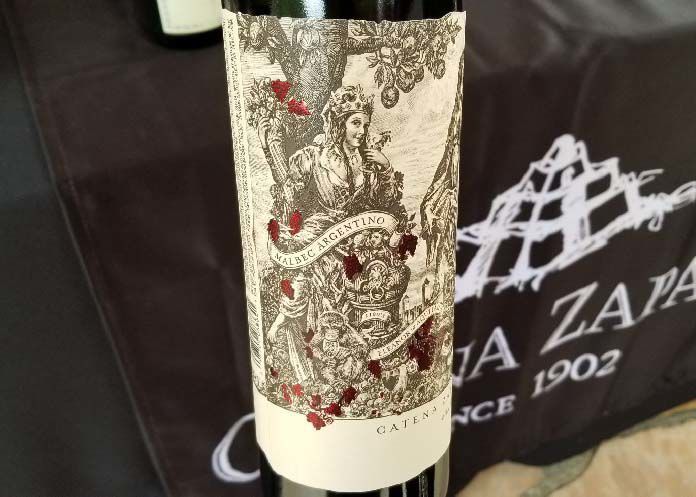 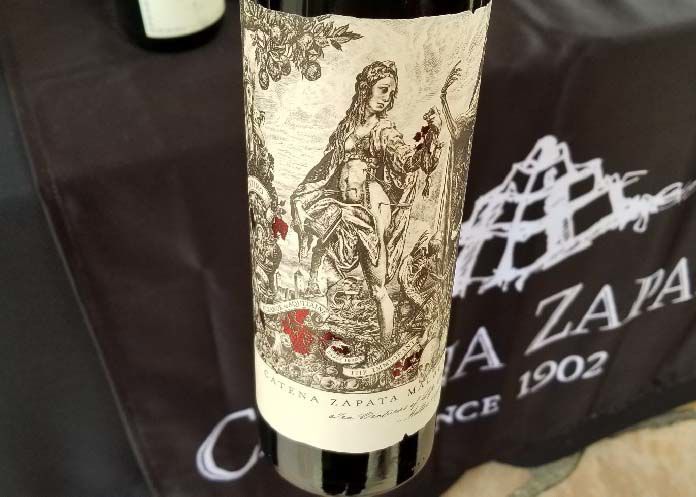 A Malbec Argentino label featurine a figure called The Immigrant. 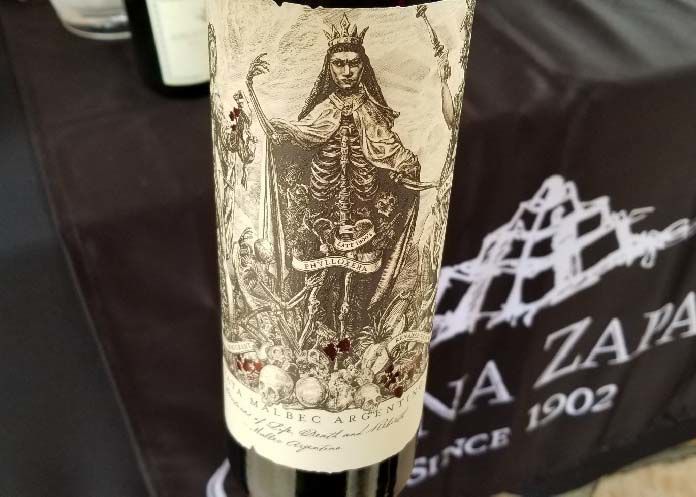 A Malbec Argentino featuring a personification of Phylloxera. 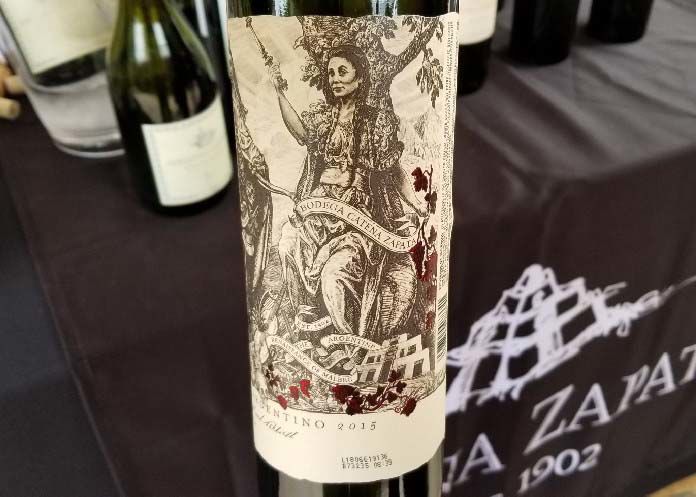 A wine label can tell us a lot about the wine inside. It tells us who the producer is, what grape(s) are in the wine, and where it was produced. The back label might describe what the wine tastes like or tell a story about the vintage, the harvest, or something quirky and humorous. The label of Catena Zapata Malbec Argentino tells a story. It tells a story of the wine, of the Catena family and of the Malbec grape.

Bodega Catena Zapata, founded in 1902 in Mendoza, produces a dozen different expressions of Malbec, but one specific bottling represents the family’s journey to produce an Argentine Malbec that can stand with the great wines of the world. This bottling, Catena Zapata Malbec Argentino, was first produced in 2008. This limited- quantity wine is made from vine selections from the best lots of the Catena family’s estate vineyards.

In 2015, the Catena Zapata Malbec Argentino was bottled with a new, special label. Laura Catena, who is a medical doctor as well as the Managing Director of Bodega Catena, and her younger sister Adrianna Catena, who has her PhD in History from Oxford, had heard the stories of their family winery and of their great grandmother Anna. They realized that women have played a role in the history of the Malbec grapes for centuries and created a label that pays tribute to the variety’s history embodied through four female figures—Eleanor of Aquitaine, the Immigrant, Phylloxera and the Bodega Catena Zapata family.

With Adrianna’s research, her husband, a playwright, took the story from the label and brought it to life. He wrote a one-woman original play titled “As Wine Flows By,” which tells the epic tale of the Malbec grape through the perspectives of four female figures who embody different landmarks in the variety’s amazing history. And Laura has been traveling around with an actress from London who has been performing the play, which I enjoyed this past week.

Malbec is a grape with a tragic story and yet a story of survival. It is a grape that has been known for more than 2,000 years, since the time of the Roman Empire. The Romans planted the grape throughout the continent, but it was thanks to Eleanor of Aquitaine in the Middle Ages who championed the grape.

In the 12th century, Malbec was the primary wine in her home in Cahors, France. Her marriage at the age of 15 to Louis, King of France, made her the Queen and her beloved Malbec wine became the wine for all of France. Eleanor divorced King Louis VII and married King Henry II of England. As Queen of England, Eleanor brought her cherished wine to England.

In the 1850s, Malbec was introduced into Argentina, brought over by immigrants. One of these immigrants was Anna Catena, Laura and Adrianna’s great grandmother. She was traveling with her family on a ship from Italy to Argentina in 1898 when she met Nicola Catena. He was on his way to the mountains to plant vines. While his first intention was to marry her sister, Anna and Nicola married and she traveled with him to the rugged Mendoza Valley where she raised their six children and the story of Bodega Catena Zapata began.

Around the time that Anna was coming to the New World, phylloxera devasted vineyards across Europe. It was the female phylloxera who laid the eggs in the bark of the vine’s trunk which destroyed the vines. Malbec, in particular, was susceptible to phylloxera and practically disappeared from France. Malbec was replaced by Merlot in Bordeaux, although it is still found in Cahors.

While Malbec was disappearing in France, it thrived in Argentina. Bodega Catena Zapata is responsible for the rebirth of Malbec, as well as for discovering extreme high-altitude terroirs in the Andean foothills of Mendoza, resulting in some of the best wines in the world. Nicolás Catena Zapata began this Malbec Renaissance in the 1990s and today the Catena family’s fourth generation continues the tradition.

Today, the Malbec grape is known as the grape of Argentina. In fact, Argentina leads Malbec production in the world with 75 percent of all acres of Malbec planted in Argentina. This grape, known as the “black grape”, was born in France but found its home in Argentina.

Catena Zapata Malbec Argentino is made with grapes from the Nicasia vineyard and the Angélica vineyard, named after Nicolas Catena’s grandmother and mother. Both vineyards sit more than 3,000 feet above sea level. Planted in 1996, the Nicasia vineyard has shallow loamy soil and the Angelica vineyard, planted circa 1930, is adjacent to dry riverbed and consists of light gravel, loam and clay. The grapes, 20 percent whole cluster and 80 percent whole berry, is 100 percent fermented in new French oak and then aged in French oak barrels for 18 months. The resulting wine is an intense violet color with red fruit and floral aromas. On the palate it is full-bodied but with soft and silky tannins.

From the label to an original play, Bodega Catena Zapata is sharing the story of their wine, of their family and of the Malbec grape.

Allison Levine, Please The Palate: A quiet visit to the Southern Willamette Valley

Oceano Wines is the winery closest to the Pacific Ocean and was founded by Rachel Martin and her husband, Kurt Deutsch, in 2016.

Oceano Wines is the winery closest to the Pacific Ocean and was founded by Rachel Martin and her husband, Kurt Deutsch, in 2016.

If you tell Scott Flora that it cannot be done, or should not be done, he will likely try it and prove you wrong.

Allison Levine, Please The Palate: A very special opportunity to taste the wines of Vega Sicilia

Vega Sicilia is considered the greatest wine producer in Spain and is recognized as one of most valued red wines in the world.

Allison Levine, Please The Palate: Barolos with a bit of age

A 2016 Barolo or Barbaresco in 2020 is still a baby, high in tannins and not ready to fully enjoy. Allison Levine tries some older wines from Fontanafredda in Piemonte.

Laura Catena – Laura Catena stands in front of a large image of the Malbec Argentino label.

A Malbec Argentino label featurine a figure called The Immigrant.

A Malbec Argentino featuring a personification of Phylloxera.