However, there are 534 growers, 141 wine companies and more than 59,000 acres of vines planted. The region is awash with wine production and the playing field is rather saturated. But in 2005, two wineries — Crowded House and Catalina Sounds — decided to join on the crowded landscape.

Crowded House was started in 2005 and named aptly for the crowded landscape in Marlborough that they were joining. The wines are made from grapes that showcase the region’s best quality, resulting in wines with vibrant and fresh aromatics, powerful fruit concentration and refreshing acidity.

Catalina Sounds is named after the Catalina flying boats, New Zealand’s famous and largest warbird, made famous in World War II, as well as the nearby majestic Marlborough Sounds. Started 12 years ago, at the same time as Crowded House, the wines of Catalina Sounds are the premium wines with the majority of grapes coming from the Sound of White vineyard in the Waihopai Valley.

As a young region, the wines of Marlborough have evolved from fruit-driven clean wines to wines with texture. And that is what winemaker Peter Jackson is making. “I want to make wines that I want to drink. I want an extra dimension to the pure fruit. At Crowded House and Catalina Sounds, we do something different to stand out from the crowd. And in my role, I have the freedom to play and experiment.”

Winemaker Peter Jackson also stands out a bit, being six feet, two inches tall. In addition, he was born in Australia, far from the wine world. With aspirations to study Japanese in high school, he ended up with his second choice, French. This was rather fortuitous. Jackson went to do a homestay in French and then majored in French and Law at university.

During his college years, he took a year off and rode a bicycle around France. Visiting different regions, Jackson fell for the culture and the history, with his favorite region being Alsace.

When he returned to Australia, he was not driven to continue studying law and decided to take a wine course in Adelaide. That course turned into a degree in viticulture and enology.

After working harvests in Emilia-Romagna, Italy, France and Australia, Jackson visited New Zealand in 2005 and fell in love with the country. He was offered a permanent job in 2006, and he and his wife decided to give it a try for two years. Now, 12 years and “three Kiwi kids” later, Jackson feels at home in Marlborough and New Zealand.

“I was first struck by the climate. There is lots of sunshine but not the heat. There is a diurnal shift that is perfect for flavor development and to retain acidity,” Jackson explained. But, also what he loves is that Marlborough is a real community. With so many producers, it does not feel competitive. “The success for one is success for all,” he said. Jackson became the winemaker at Crowded House and Catalina Sounds in 2011.

I had the pleasure to taste the Crowded House 2015 Sauvignon Blanc, the vintage currently in the U.S. market. At $13-$15 per bottle, this wine is the quintessential New Zealand Sauvignon Blanc but it is more elegant and restrained. The wine is bright, clean, crisp, dry and racy with notes of grapefruit and passion fruit and a medium plus finish that coats the tongue.

With the Catalina Sounds wines, Jackson wants to celebrate the fruit expression of Marlborough, but he also wants texture. The Catalina Sounds 2017 Sauvignon Blanc, which is $15-$17 per bottle, is barrel fermented and spends time on the lees. The resulting wine has a classic nose of green grass and citrus but also smoky notes. On the palate, the mouthfeel is more intense and the wine has a long finish.

Catalina Sounds also produces Pinot Noirs, which average $17-$19 per bottle. The 2015 Pinot Noir, with notes of tart cherry and red fruits, has elegant acidity and a subtle sexiness compared to the more approachable 2016 Pinot Noir with brighter, fresher red fruit notes and a savory, sexy finish.

Crowded House and Catalina Sounds have taken on the crowded landscape of Marlborough, New Zealand and are standing out among the crowd. 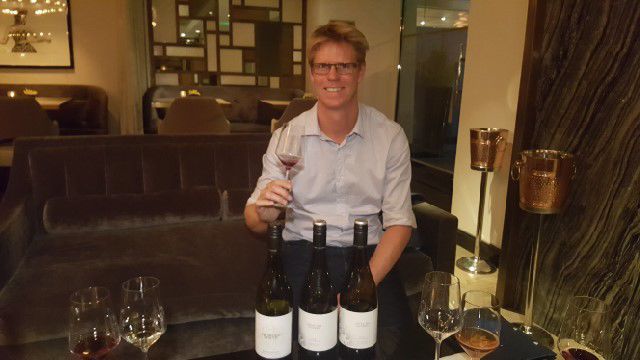 Peter Jackson is winemaker for Crowded House and Catalina Sounds in New Zealand.