He did not mean that the actual wine in my glass was that old but rather that the rosé wine was from a winery dating to 1199. Prieuré de Montézargues was a monastery in Tavel, France and the French King had granted the monks the right to make wine. Today, the 84-acre property is owned by the Richard family who also own Chateau La Nerthe in Chateauneuf-du-Pape and Domaine de La Renjarde in Cotes du Rhone Villages.

After enjoying the structured Prieuré de Montézargues Tavel 2015 made with 55 percent grenache, 30 percent cinsault, 13 percent clairette and 2 percent of syrah, mourvedre, carignan and courboulanc and with its notes of strawberry and gooseberry, we sat down for lunch and to taste the wines of Chateau La Nerthe.

The first written record of Chateau La Nerthe dates to 1560, making it one of Chateauneuf’s oldest estates. It is also one of the largest properties in Chateauneuf-du-Pape with 225 acres that are located in a single block around the Chateau. The cellar was built in the 15th century and the chateau was built in the 18th century as a residence. The Richard family, who has been in the wine industry since 1892, purchased the estate in 1985. Certified organic since 1998, Chateau La Nerthe grows all 13 of the legally permitted grapes in Chateauneuf-du-Pape.

While grenache makes up more than 75 percent of the grapes in the area, only half of the vineyard at Chateau La Nerthe is planted to Grenache. Thirty percent is planted to syrah, which is three times more than anywhere else in the region. Many of the vines average over 40 years old.

We were told the history of the winery by Bristiel who grew up drinking Chateau La Nerthe. His father was the winemaker there. Bristiel did not want to work in the wine industry like his father but he eventually studied wine and in 2004 moved to Chile where he built a winery. He returned to Chateau La Nerthe in 2009 and works as the export director.

While the majority of Chateau La Nerth’s production is dedicated to red wines, they make a fair amount of white wine, which is less than five percent of the production in Chateauneuf-de-Pape. The Chateau La Nerthe Blanc 2014 is made with 35 percent grenache blanc, 33 percent roussanne, 18 percent bourboulenc and 14 percent clairette.

Hand-harvested with 38 percent of the wine aged in barrels and the remainder in stainless steel, the pale yellow wine has notes of citrus, white peach and pear. There are 1,300 cases of this $60 wine compared to the 200 cases of the Chateau La Merthe Clos de Beauvenir 2012 made with 58 percent roussanne, 32 percent clairette, 8 percent grenache blanc and 2 percent bourboulenc.

An extraordinarily elegant and intense wine with notes of peach, apricot and sweet spices, this limited wine can be found for $170.

The red wines include the fresh, everyday drinking Les Cassagnes de La Nerthe 2013 that falls under Cotes du Rhone Village. A deep red color with intense red fruits and sweet spices on the nose, this wine is made with 60 percent grenache noir, 20 percent syrah, 10 percent cinsault, 5 percent mourvedre and 5 percent carignan and retails at $24. At about $60, the Chateau La Nerthe Rouge offers the balance and elegance the winery is known for.

We got to taste the 2012 Rouge as well as the 2006 Rouge. Both wines are made with varying percentages of grenache noir, syrah, mourvedre and cinsault. Aged in 12 months in a combination of oak barrels and wooden vats before blending, both wines are dark red with notes of spices and black fruit on the nose and soft, fine tannins on the palate. What was impressive was the freshness and liveliness of the tannins in the 2006 Rouge, which is already 10 years old and yet still so youthful.

Our tasting ended with the 2012 Chateau La Nerthe Cuvee des Cadettes. This wine is from a unique 20-acre vineyard planted with 85 to 100-year-old vines. A traditional GSM blend of almost equal parts syrah, grenache and mourvedre, the wine is aged in 100 percent new oak barrels for 15 months. The resulting wine is a dark red color, almost purple, with aromas of black cherry and sweet spices. The wine is rich and complex but also young.

Chateau La Nerthe is in its 500 harvest in its 15th-century cellar. As one of the largest and oldest properties in Chateauneuf-du-Pape, every glass is a part of history. 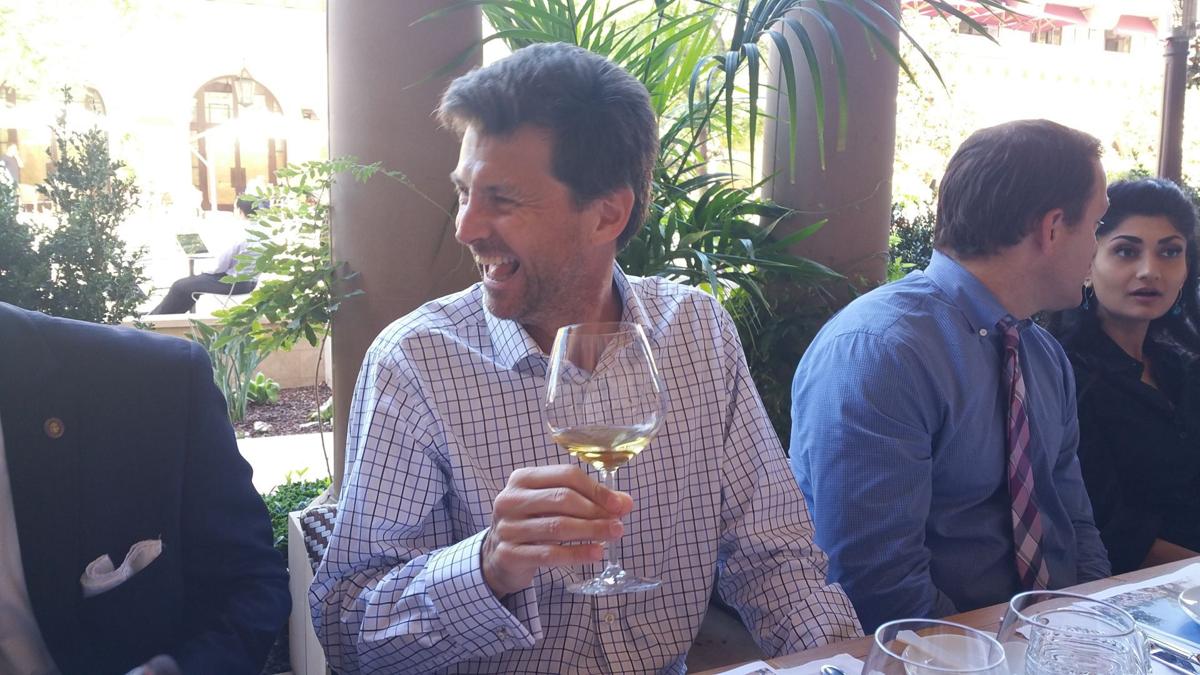