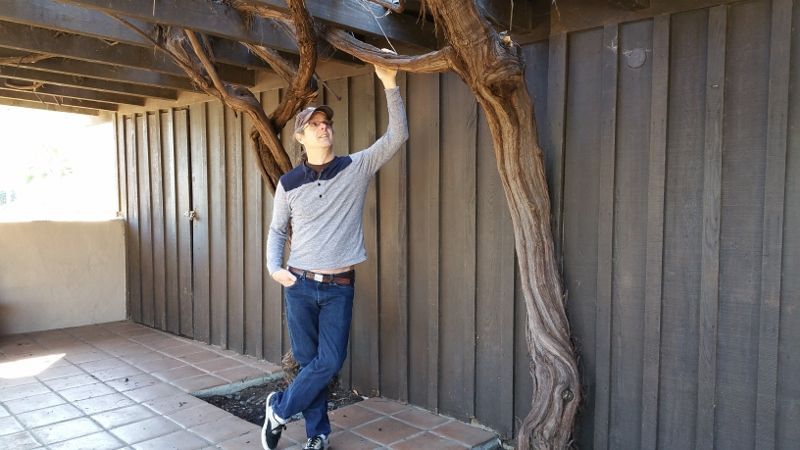 Winemaker Wes Hagen poses with the the Avila Adobe vine. The Adobe, completed in 1818, is the oldest standing structure in Los Angeles . 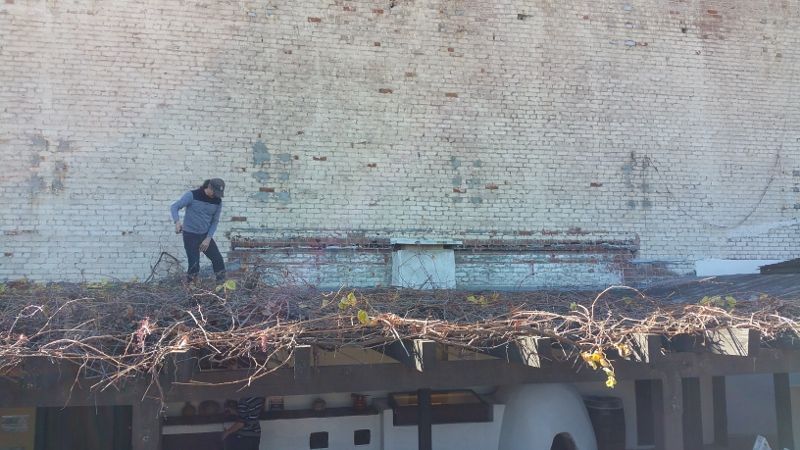 Wes Hagen prunes the old vine, which grows over a pergola at the Avila Adobe in Los Angeles.

California, a state with 137 AVAs (American Viticultural Areas) that stretch as far north as Trinity County and as far south as Riverside County, has been producing wine for more than 150 years. Do you know where the oldest living vine in California is located? Napa? Sonoma? Keep guessing. You might be surprised by where the vine is.

According to Wes Hagen and other winemakers and educators, the first planting of vinifera vines was in the California Missions – starting in San Diego and then San Juan and then San Gabriel. There is no proof that the vines still exist in San Diego and Hagen is investigating whether the vine planted at the San Gabriel mission is still alive and producing. But, the vine at the Avila Adobe is the oldest vine that is still producing that he has encountered.

The Avila Adobe vine is located inside the courtyard of the Adobe Avila, the oldest standing structure in Los Angeles. Located on Olvera Street and part of the Pueblo de Los Angeles Historic Monument, the Avila Adobe was completed in 1818.

The vine, which would have been planted as pergola canopies to provide shade for the courtyard, is actually two trunks that were planted at the same time and are within five feet of each other. While it is two vines, the Avila Adobe vine is considered as one. There are also at least two other independent vines along Olvera Street that were possibly planted 40 to 60 years after the Adobe Avila vine.

The vine was rediscovered by L.A. city archivist Michael Holland. A home winemaker, Holland harvested the grapes from the vine in September 2015, cautiously taking whatever fruit he could find. He managed to make two to three gallons of Angelica, a macerated red wine in which fermentation is stopped, leaving 12 to 15 percent residual sugar. A neutral grape spirit is added. The result is a fresh, sweet fortified berry wine that is a bright, electric pink color like a rose of syrah.

Holland contacted winemaker Wes Hagen, whom he had met at a winemaker dinner, and asked for his help.

It is not known what, if anything, the grapes were used for in the 1800s but there is a good possibility that the sweet, red wine was used for communion in the missions.

Holland and Hagen began to research the origins of the vine. They sent it to the Foundation Plant Material Service (FPMS) at UC Davis where the vine was DNA tested and compared with the entire library.

It was found that the grape from the Adobe Avila vine was clearly a derivation of the Vina Madre (or Mission) grape from the San Gabriel mission. It is a hearty vine that does not mildew or rot. This was the vine that was planted at all the missions throughout California. New research out of Spain has proven that the Mission grape is 100 percent vitis vinifera and is the “red palomino” grape.

At the end of January 2016, Hagen began traveling down from Santa Barbara to Los Angeles regularly to observe the vine and prune it before dormancy. His goal was to prune and remove everything dead wood and leaves to open the canopy as much as possible.

As the vine formed a canopy over the adobe, Hagen set up a plywood board over a nine-foot section on top of the pergola. Careful not to fall, and working in a sequential process, he spent close to 20 hours cleaning the vine that stretches over 400 square feet.

Hagen explained, “the main key is to find the dead wood and remove it. Then I take last year’s growth and cut it back to a small spur.

“The vine is drought-stricken and neglected but it is a gem,” Hagen said. “It is necessary to give the vine light and air and show it love so that it comes back to life.”

The vine produces tiny berries in little Champagne clusters. But, the tiny berries are not currently coloring up because the leaves do not have enough chlorophyll or nutrients to provide sugar to the grapes.

In 2015, 20 to 30 pounds of grapes were picked. Hagen would like to double the yield each year and hopes that after a few years of pruning, they can get 500 pounds or more. “I think the vine can ultimately produce 1,000 pounds,” Hagen said. The goal is to do this by 2018 in time for the 200th anniversary of the Avila Adobe.

Raised in Los Angeles, Hagen moved to the Central Coast to make wine only to find himself back in Los Angeles pruning the oldest vine in California. The Miller Family and J. Wilkes Wines, a committed seventh-generation California family farming company and his current employer, have been generous in donating Hagen’s time to prune the Avila Adobe vineyard.

As Hagen spends more time with the vine, he feels more and more responsible for protecting this old Los Angeles wine history. “We need to be taking care of the vine as the history of wine in Los Angeles is a great untold story. It is a great honor to work on this vineyard for future generations.”

Allison Levine is a freelance writer based in Los Angeles. Read more of her work at www.PleaseThePalate.com.

Winemaker Wes Hagen poses with the the Avila Adobe vine. The Adobe, completed in 1818, is the oldest standing structure in Los Angeles .

Wes Hagen prunes the old vine, which grows over a pergola at the Avila Adobe in Los Angeles.