Become a Member
Read Today's E-edition
Share This
Dan Berger, On Wine: An Award of True Merit
Share this
1 of 3 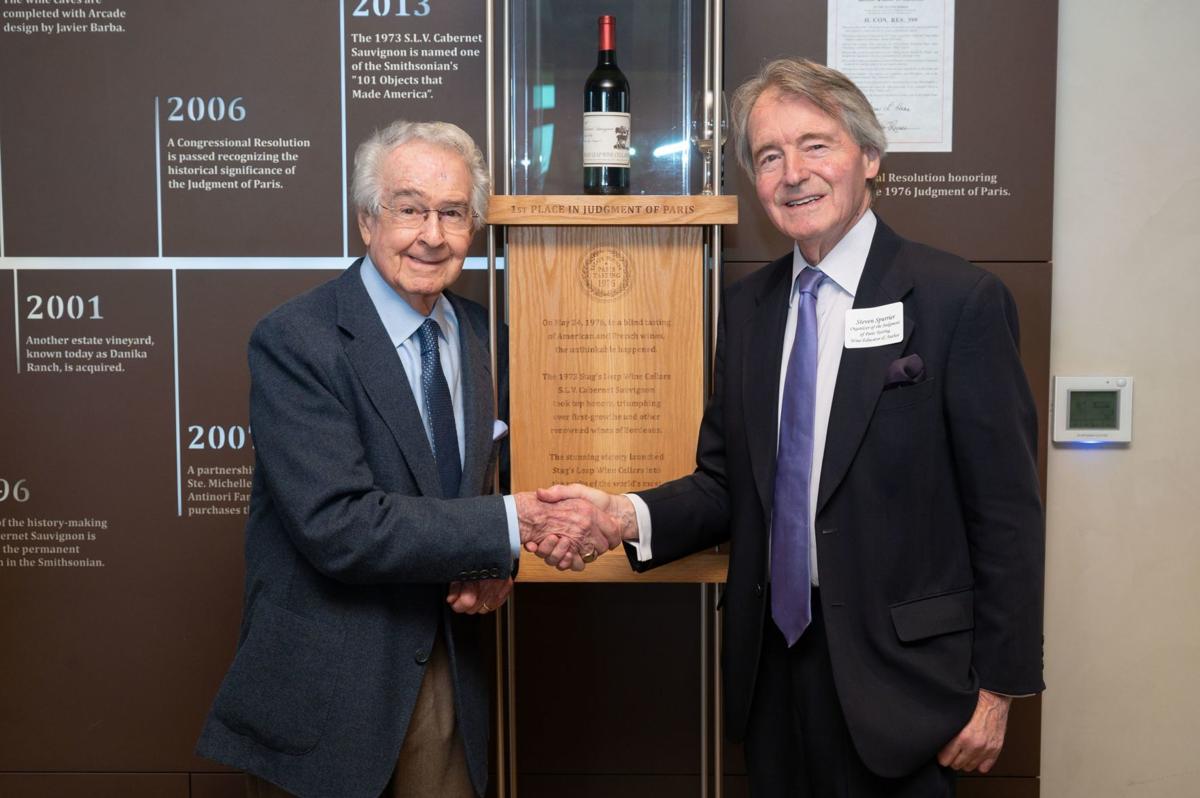 Winiarski and Stephen Spurrier, the man who came up with the idea of staging a taste-off between California and French wines. 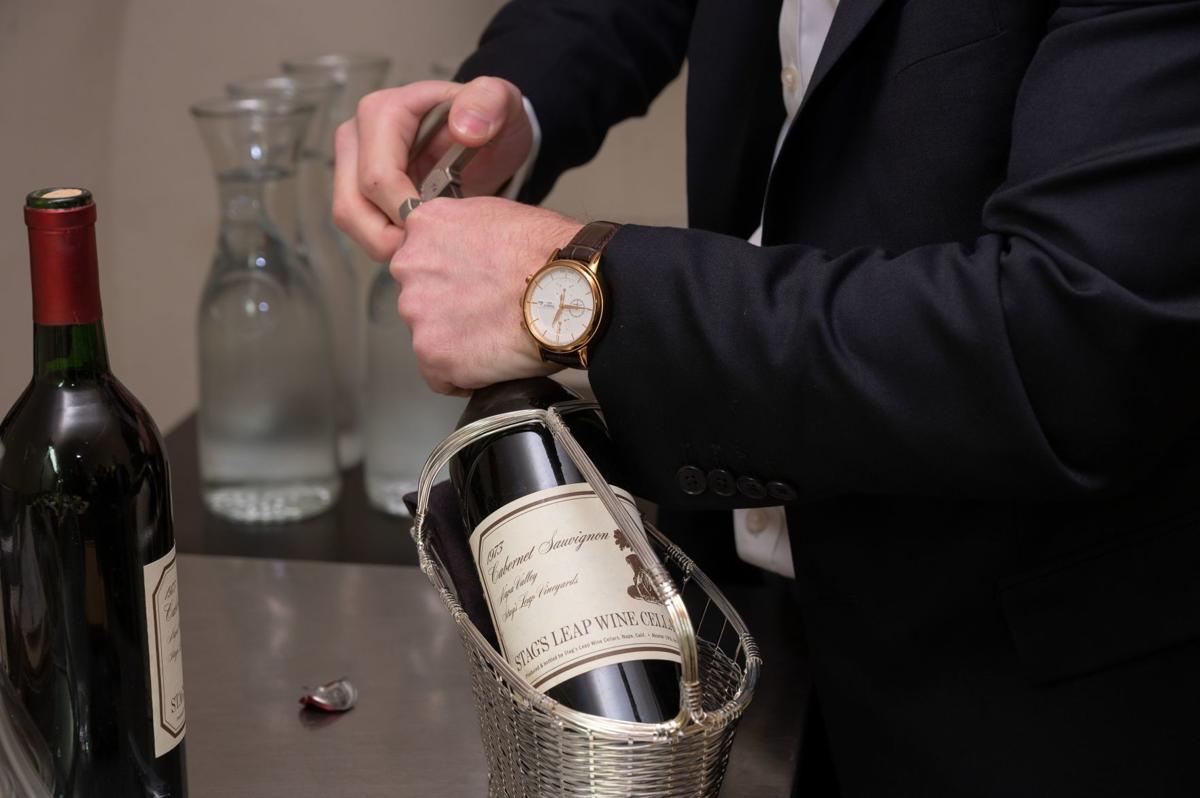 As part of the festivities, Winiarski poured guests a taste of the 1973 Cabernet Sauvignon that won the Judgment of Paris in 1976. 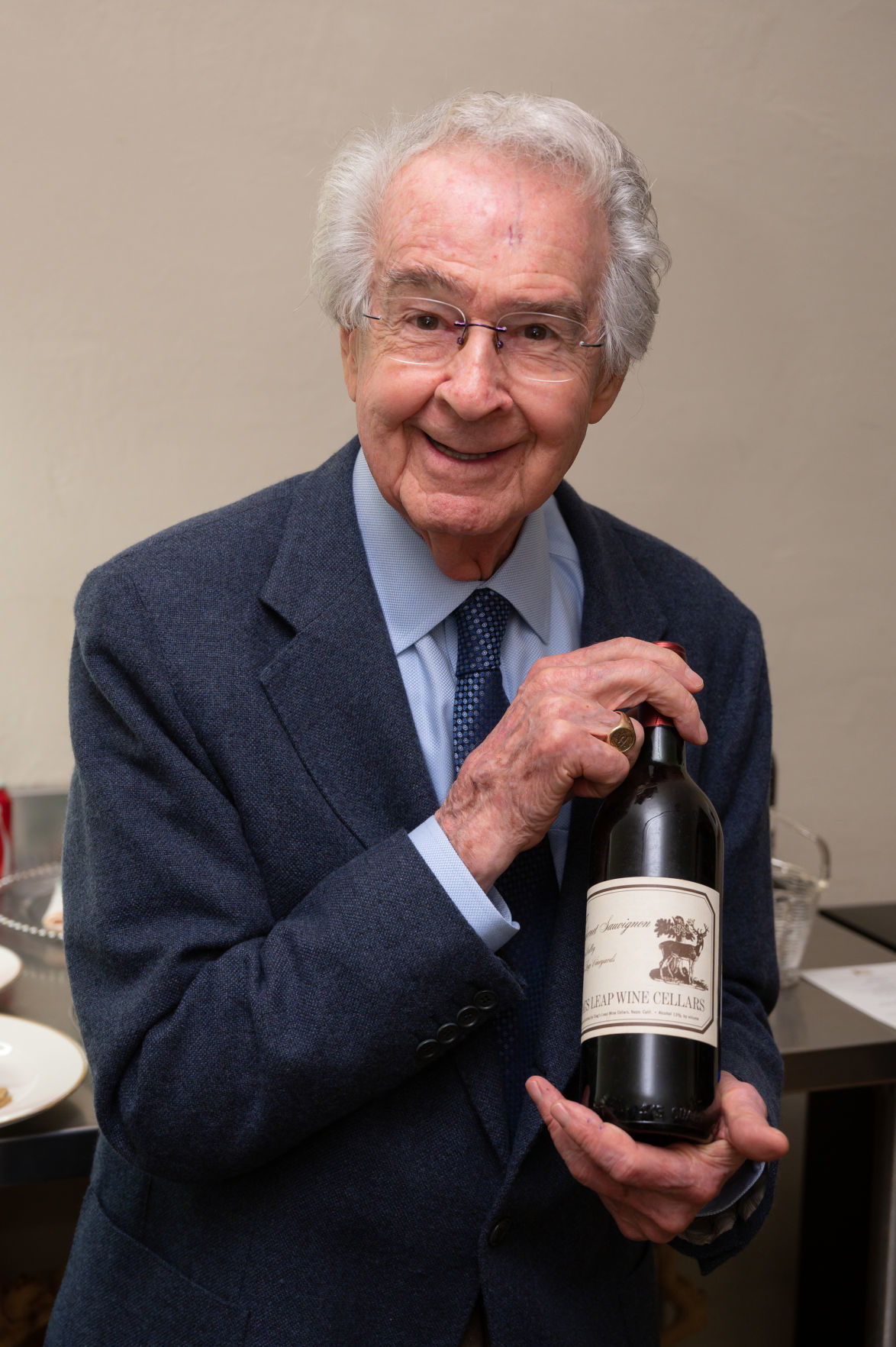 Warren Winiarski with his award-winning wine.

With all the day-to-day bustle in busy wine country regions — tourism, marketing, lodging, trucking, culinary endeavors, and dozens more mundane disciplines — it’s easy to forget those who laid the foundation of it all.

So it was heartwarming last week when iconic visionary wine pioneer Warren Winiarski, founder of Stag’s Leap Wine Cellars and a true pioneer of Napa Valley Cabernet, was honored for his important contributions leading to America’s ascension in the world of wine.

The award was not only for wine quality, but also for wine’s cultural contributions.

An award to a great man of wine is appropriate, and Warren has been honored as a luminary by numerous wine-industry entities. What was vital about last week’s honor was who presented it.

For this was not a wine-industry honor. This time, the presenter was an entity that itself establishes a historic cornerstone for the entire industry.

It was the National Museum of American History at the Smithsonian Institution in Washington, D.C., which recognized Winiarski’s achievements of nearly 50 years in the Napa Valley.

By presenting him with the James Smithson Bicentennial Medal, the museum took one more — and vital — step to normalizing wine as a key art form in the American firmament.

On my drive to Stag’s Leap for the medal presentation, I realized that to many Americans, wine is still considered equivalent to demon rum — a pernicious destroyer of families, and the real reason Prohibition was such a great idea — and why it should be re-instituted.

Industry awards surely are nice, but an award from the Smithsonian is prodigious, especially because it removes yet another stigma from wine’s curriculum vitae.

Few countries, even those that have survived Prohibition movements of their own, continue to have a large segment of the population that continues to think wine should be equated with cocaine.

But many sectors of the American culture still believe wine to be nothing more than an inebriant with no other socially redeeming advantages. Or medical ones. To them it’s an artifact of wealthy snobs.

This honor elevates all wine to art-form status.

Winiarski’s tale in the Napa Valley starts simply enough. He and several investors acquired a Napa Valley prune orchard in 1970, and Winiarski had the foresight to plant Cabernet. At the time, that grape was risky. Little of it was planted here.

Putting Cab vines in the coolish area known as Stag’s Leap was not only a risk, but potentially disastrous fiscally.

Winiarski had a vision, however, so he made the first wines in a classic, neo-continental style. And in 1976, the novice winemaker’s 1973 Cab hit the trifecta. It scored higher than classified growth Bordeaux and several other California Cabs in a blind tasting featuring wine experts — from Paris and Bordeaux.

After a Time magazine article elevated California to world-class winemaking status, Winiarski had a choice. He could have capitalistically grabbed the moment by taking out television ads, appeared on billboards, and done all of the ostentatious promotion most other industries would have pursued.

To his credit, he dealt with fame with grace, dignity, and humility. He was aware of all the hoopla surrounding the news from Paris, but subtlety became his calling card. That’s the way he had always lived, and he saw no reason to deviate.

This former lecturer from the University of Chicago is more a philosopher, poet, and visionary than promoter, and he and others get much credit for the fact that the 1976 victory was never tarnished with vulgar cologne-like ads.

Besides, it was a different era; an era in which wine still was being widely disparaged.

In opening remarks at a luncheon honoring him last Thursday, Winiarski said, “Wine was not what it is today, in the public view.”

He referenced the neo-Prohibitionism that was still rampant in some U.S. quarters in the 1970s, and he added, “You had to be careful speaking about it. We heard the words ‘wino’ and ‘booze.’ Wine was still booze to some people.”

And as such, it was a topic to which few art and culture disciplines would give a platform.

So the medal last week was a true validation of the elevation of this subject from the basement to the penthouse, allowed to share the stage with other such masteries as food, music, poetry, the horticultural arts.

Later, during the luncheon, Winiarski credited three important people (now all deceased) who helped guide him down the path to greater achievements.

“There was Lee Stewart (winemaker at Souverain, then located in Rutherford), for whom no detail was too small. There was Robert Mondavi, for whom no goal was beyond exceeding, and there was Andre Tchelistcheff for whom beauty was everything.”

Winiarski was Mondavi’s first winemaker in 1966, and he also worked at Souverain with Stewart.

In attendance at the medal ceremonies was Mondavi’s son, winemaker Tim Mondavi, who continues the family tradition with an iconic Cabernet from a nearby hillside vineyard, as well as Tchelistcheff’s widow, Dorothy.

Also in attendance was Stephen Spurrier, the man who came up with the idea of staging a taste-off between California’s nascent wine culture and France’s long-established vinous tradition.

And also at the ceremony was John Williams, the first winemaker Winiarski hired. Williams later founded Frog’s Leap Winery (the name an homage to Winiarski!), where he continues to make wines in the style that Winiarski pioneered. This style is respectful of the grapes and the soils from which they come.

And fittingly, at the event as well was the esteemed culinary/wine visionary Darrell Corti of Sacramento, who actually predated Winiarski by a few years with Cabernet in Stag’s Leap.

Corti acquired some Cabernet grapes from the late local grower Nathan Fay and made a tiny amount of Cabernet, just to determine if Stag’s Leap was the right district for the grape.

It was, he determined!

Winiarski’s greatest achievements may not have been directly connected to wine quality. They include several contributions that continue to fly well under the historical radar.

Indeed, many still do not realize how vital it was for this man of his quiet fortitude to place all his chips on the future history of this region, as he did just over 50 years ago.

The controversial issue at the time was whether it was appropriate to establish the Napa Valley Ag Preserve, which would restrict structural development in the valley, where vast acreages of wine grapes now thrive. It was a contentious political football.

Last year, in a story in the Register recognizing the 50th anniversary of passage of the Ag Preserve, Winiarski was correctly identified as the key person who shepherded the issue to success.

In that article, Winiarski was quoted:

“It was a deeply controversial issue for this valley, setting groups in conflict, setting families apart, causing high-temperature conversations, lots of red faces, and two prominent grape-grower brothers who were on opposite ends of this never spoke to each other again.”

Today, Warren and his wife and co-founder, Barbara, live nearby in retirement, where they still own a superb vineyard.

The Smithsonian festivities of last Thursday were moderated by Anthea M. Hartig, Ph.D, the Elizabeth MacMillan Director of the National Museum of American History, and it was hosted by the current owners of Stag’s Leap Wine Cellars, Chateau St. Michelle of Washington.

Current Stag’s Leap wines were served at the luncheon, and then as a treat, Winiarski opened two of the last remaining bottles of the famed 1973 Cabernet Sauvignon, one of the most prized wines in the world.

Perhaps because of the fact that the wine has only 13.0% alcohol, it seems to have aged very gracefully over the last 46 years. The wine remains an impeccable example of why Winiarski was right to invest his faith and his soil in Cabernet and why balanced red wines have more potential to live long and thrive than do more ostentatious versions.

Dan Berger, On Wine: Is cabernet worth it?

It wasn’t just hyperbole when I recently said that two of the best Cabernet Sauvignons available in the Napa Valley were from Australia. But p…

In more than four decades of writing about wine, I’ve read perhaps two dozen older books on the history and the personalities of European wine…

Dan Berger, On Wine: The excellence of Aussie wines

About 1994, a wine lover asked me to name the best Cabernet in the Napa Valley. His query followed an article I had written about diverse sub-…

Pinot Gris once was the disparaged stepchild of white wine lovers. And several of us who wrote about wine perpetuated the myth with reproachfu…

Dan Berger, who met Joe Coulumbe in the 1970s, shares his memories of the founder of Trader Joe's and a foodie before the term was coined.

Stag's Leap Wine celebrates its golden anniversary in Napa Valley with consumer events across the U.S.

Winiarskis make a $4 million bequest to the Smithsonian

Warren and Barbara Winiarski have made a $4 million bequest to the Smithsonian's National Museum of American History to fund a permanent curator of food and wine history.

Winiarski and Stephen Spurrier, the man who came up with the idea of staging a taste-off between California and French wines.

As part of the festivities, Winiarski poured guests a taste of the 1973 Cabernet Sauvignon that won the Judgment of Paris in 1976.

Warren Winiarski with his award-winning wine.