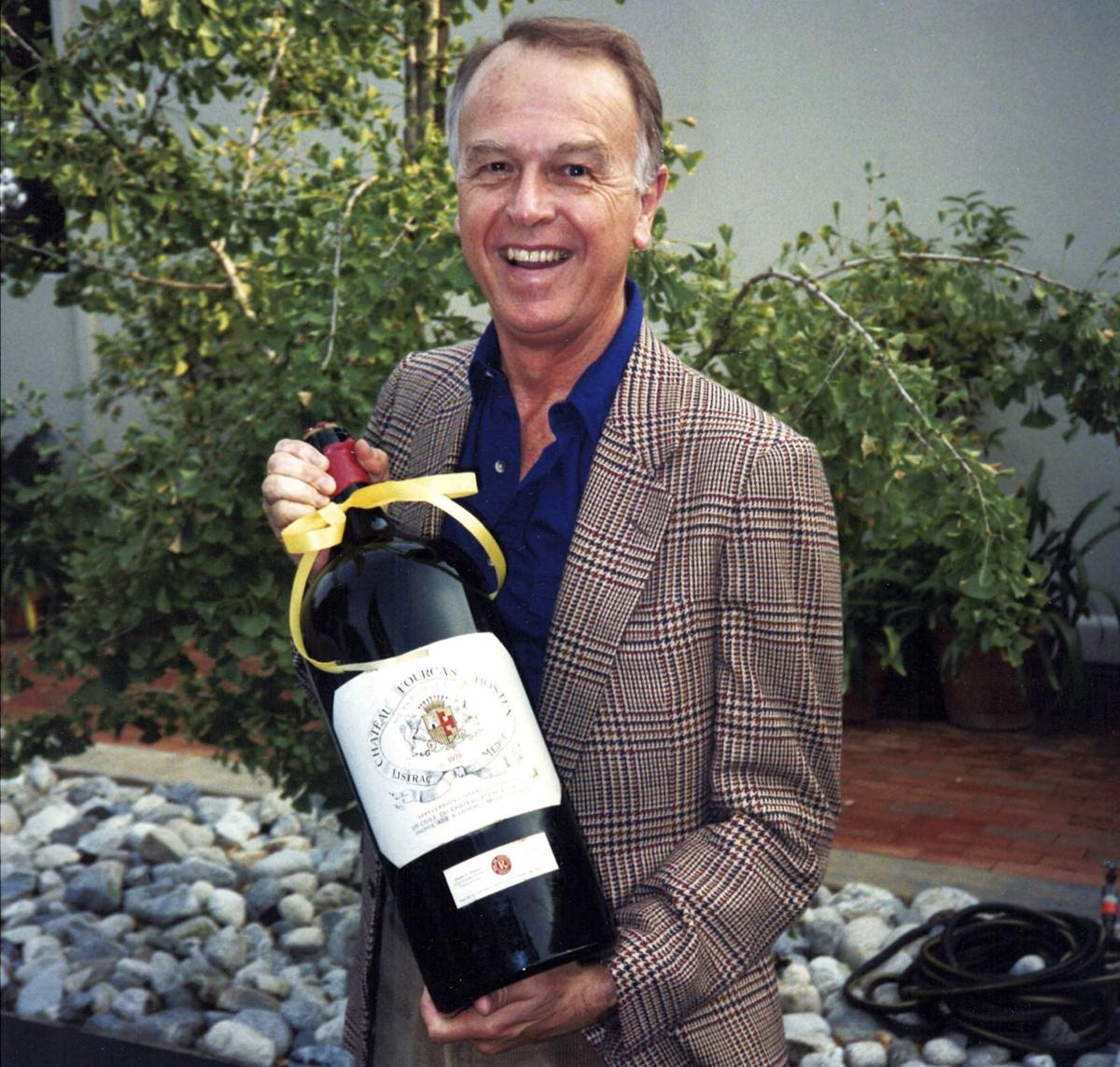 This circa 1985 photo provided by Esme Gibson shows Joe Coulombe, the founder of the Trader Joe's market chain, at his home in Pasadena, Calif. 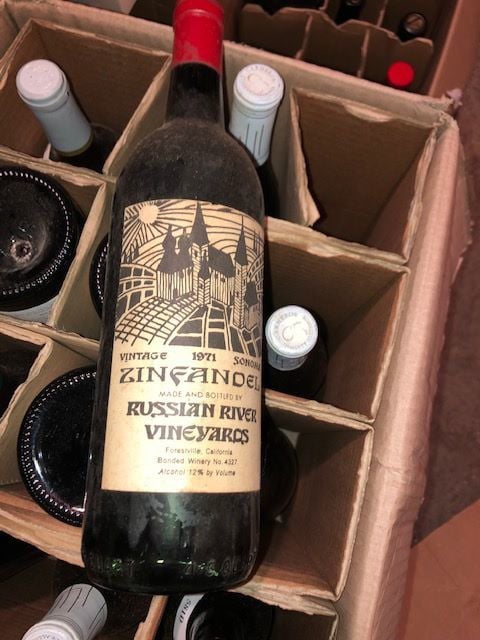 A bottle of wine from the early Trader Joe's, from the author's collection.

Wine had yet to be discovered as a key artifact in California’s budding foodie culture.

Indeed, even the word “foodie” hadn’t yet been identified as an actual movement, which is what made Joe Coulombe, founder of the Trader Joe’s chain of stores, so visionary. He and a few others recognized how interested an entire generation would be with distinctive flavors and products, notably including wine.

It was 1973 when I first realized that there was a fledgling, but vibrant, movement toward wine as a specialty product. It would be almost six more years before a radical revolution would take place in how all wines were being sold at retail.

Trader Joe’s was far out in front and always had some of the best retail wine strategies. Joe stood firmly behind smaller wine brands and his support of the industry was widely appreciated.

The Trader Joe’s chain that Joe founded as an outgrowth of his original Pronto Market in Pasadena began to establish itself not only for its support of California’s smaller wine producers, but also for its ability to see how important “brand value” was in the retail wine market.

Joe Coulombe, who passed away last Friday at age 89, was truly an innovator in the state’s nascent food and wine culture and it was he as much as anyone who sparked the wine revolution that led to California’s ascendance as a pre-eminent producer.

By 1973, I was already a tyro wine collector. I had established a below-ground stash of wines in terra cotta drainage tiles and had begun putting away some iconic Cabernets, most of which cost the outrageous sum of $7 a bottle. Considering that all Zinfandels then sold for $4.50, seven bucks was a lot.

At the time, Joe Coulombe began publishing a newsletter (now call the Fearless Flyer) about unique product offerings. The text, conceived and written by Joe himself, included what he believed was vitally important information for anyone buying red wine.

After a paragraph or two of introduction, a tasting note for a wine would appear that looked a bit like this:

“1971 Russian River Vineyards Zinfandel, Russian River Valley ($6.99/20 minutes),” followed by a brief description of the wine. The words “20 minutes” was Joe’s suggestion for how long the wine needed to be decanted to be at its best for early consumption.

Trader Joe’s published the time-open recommendation for many years. I spoke with Joe about this two decades ago, and he said it was his way to get consumers comfortable with the fact that almost all red wines benefit from aeration when they’re young.

This was no wild guess. Joe told me that he investigated how long each wine needed to be open to display its best.

But he said he also knew that, at the time, many California wineries erred on the side of caution and often used a bit too much sulfur dioxide in their young red wines to protect them from deterioration. And he knew that aeration was the best method for getting them to taste properly.

In early 1974, a manager at the Trader Joe’s San Fernando Valley store told me that several wine-savvy Trader Joe’s employees would be evaluating candidate wines for the small chain’s inventory in a few days.

I called Joe and explained that I was a dedicated wine collector who was hoping to write a column on wine. He invited me to join the Trader Joe’s tasting panel the following week. Many California wineries had submitted samples of bulk-wine blends that were candidates for a label called Trader Joe’s Red Wine, or something equally generic.

It was intended to be sold for $1.99 and would compete at the same price with wines called Burgundy that Joe already carried from Simi, Heitz, Sebastiani, and others.

Though most of us preferred one red blend, Joe liked our second choice, a blend based on Barbera from Burgess Cellars in Napa Valley. That turned out to be the wine he picked. I ended up buying six bottles of it.

One curious aspect of the Trader Joe’s staff wine evaluations. Joe told us the best palate cleanser was plain romaine lettuce! “Sure, I know the spit-bowl looks unsightly,” he said, but he believed romaine was better than plain water between wines.

Another fabled Trader Joe’s purchase was a 1974 Cabernet Sauvignon, from a great vintage, that he bought from a reportedly great producer’s bulk inventory. It also sold for $1.99! He almost never revealed which producers sold him bulk wines for his house brands. (The flyer often says something like, “Made for us by a superb Sonoma County winery.”)

Well before most West Coast wine shops realized the importance of red Bordeaux, Joe Coulombe offered many, including some from widely recognized Chateaux. We still have two magnums from the vaunted 1975 vintage with Trader Joe’s price stickers on them.

Imports were not the only area of wine in which Joe dabbled. He already carried high-end Champagnes. To that list he added an unknown California sparkling wine, Schramsberg of the Napa Valley.

Schramsberg gained headlines when President Richard Nixon brought the wine with him to China in 1972, but prior to that, the brand was all but anonymous.

I interviewed Schramsberg’s late owner, Jack Davies, in the 1990s about his earliest years. “We were completely unknown at the time,” said Davies. “But Joe liked what we were doing.” He added that Coulombe “was willing to take a chance on us when no one else would. We’ll never forget that,” he said about his continued loyalty to the chain.

Joe sold the chain of Trader Joe’s stores to the huge German grocery operation Aldi in 1979. Today, the Trader Joe’s chain has grown to more than 500 stores in more than 40 states and is continuing to expand.

Dan Berger, On Wine: Where to find wine information

Dan Berger traces the rise of New Zealand wines in the 21st century.

Dan Berger says we are in one of those periods in which savvy American consumers can take advantage of an huge oversupply of wine.

Dan Berger, On Wine: The confusion over tariffs

Dan Berger explains the confusion in the media coverage by the prospective wine tariffs.

Over the decades, I’ve noticed a lot of wine with common flaws, such as oxidation. And I’ve also noticed that most people do not see the flaw -- or even know it is one.

Dan Berger, On Wine: An Award of True Merit

Dan Berger, On Wine: What kind of wine is this?

There’s no question that wine is a complex subject. How complex? We’ve all been there: We’re standing in a retail store, facing a wall of 100 domestic Chardonnays. And we realize how confusing it is. Oh, the questions we could ask!

If the coronavirus pandemic is inspiring you to begin a wine cellar, Dan Berger has some timely tips.

This circa 1985 photo provided by Esme Gibson shows Joe Coulombe, the founder of the Trader Joe's market chain, at his home in Pasadena, Calif.

A bottle of wine from the early Trader Joe's, from the author's collection.