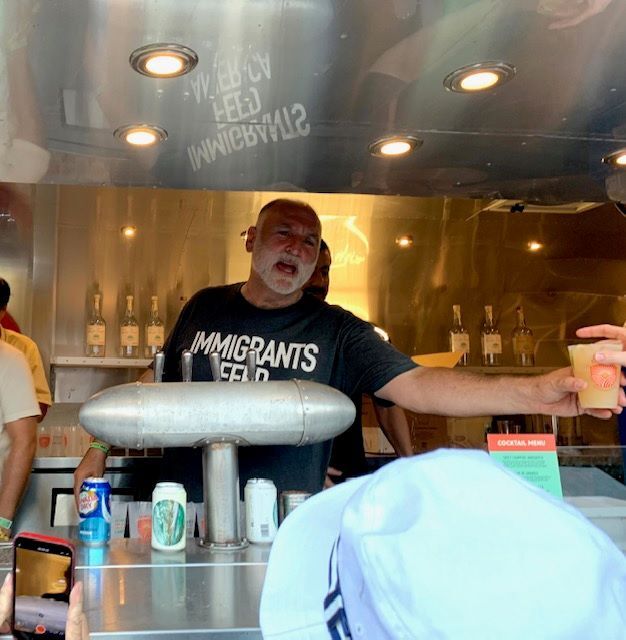 Food and beverages flowed, along with the music, at BottleRock 2021.

As I write this vignette I find myself aphonic, elated and physically exhausted. The highly anticipated BottleRock Napa Valley 2021 has just ended with a bang.

In spite of the many challenges, which included delays and pivoting from the challenges of the last few months as well as last-minute changes and cancellations to the lineup, the show went on to leave a mountain of positive memories seared in our minds.

On its eighth edition, the festival has cemented itself as one of the top events in the nation and showing growth in many realms.

The beauty of BottleRock is the multi-dimensional aspects of entertainment; you can simply create your unique experience by creating your own experience. The music to choose from ranged from seasoned and renowned bands like Foo Fighters and Guns and Roses to old school hip hop artists like Warren G, DJ’s (which included James Murphy from LCD Soundsystem) to local bands like Obsidian Son and the Silverado Pickups, as well as alternative bands that captivated the audience like Jimmy Eat World and Mondo Cozmo.

The variety of stages offered many choices for the concert-goers. There were of course the two main stages reserved for the biggest names, but this year we ventured into the other venues which included the Jam Cellars Pad. The Truly stage offered shade and excellent food choices while listening to jam bands and heavy metal and the Plaza stage featured excellent acts like Jon Batiste. In the VIP area we discovered the VIP Village stage, which proved to be an ideal oasis with great acoustics and comfortable couches on which to lounge.

Aside from the impressive musical talent, the weekend was packed with a multitude of chefs and celebrities that gave life to the Williams Sonoma culinary stage. The entertaining luminary roster included global celebrity and activist Jose Andres. During the weekend, he had a big aura around him as he told stories, cheered the service staff and even went behind the bar to make cocktails. Other celebrity chefs included the charismatic Aaron Sanchez, Ming Tsai and Flavortown Man, Guy Fiery who made multiple appearances throughout the weekend.

As usual, an extensive array of culinary delights were offered throughout the weekend with options like Press Napa Valley’s famous Pig Ears, Blanchard’s Fried Chicken, The Chairman Truck featuring their delicious baos and the debut of the highly anticipated Loveski Deli serving the winner pastrami fries -- amongst hundreds of other choices across the Napa Expo grounds.

As with many attendees, we were a bit anxious at the thought of being amongst the crowds so we decided, aside from being fully vaccinated, to wear face coverings throughout the weekend as a preventative measure.

On Friday we eased ourselves slowly into the event, scoping the layout and getting comfortable with large groups.

By Saturday, we'd found our footing and had a concise plan. We arrived early enough to catch Mondo Cozmo play at the main stage, which was energetic and uplifting, prompting us to catch the band again at their Jampad appearance. Other highlights of the day included The North Mississippi Allstars at the VIP Village Stage and a glimpse of rock legends Guns and Roses.

Sunday was packed with excitement and it included a powerful showing by Jon Batiste and his soulful band, which made believers out of the audience. If there was any doubt of the magnitude of the Foo Fighters, it was cleared out by lead man Dave Grohl and the band. The legendary group delighted the audience with their top songs as well as an ode to The Bee Gees with contagious energy and a remarkable tribute to Queen with drummer Taylor Hawkins singing "Somebody to Love" while Dave manned the drum set.

What else can be said that hasn’t been stated? BottleRock certainly brought much-needed joy to the valley and thousands of live music fans. Thank you to the Latitude 38 Entertainment team for making this happen. Counting the days for BottleRock ‘22 in May!

Food and beverages flowed, along with the music, at BottleRock 2021.