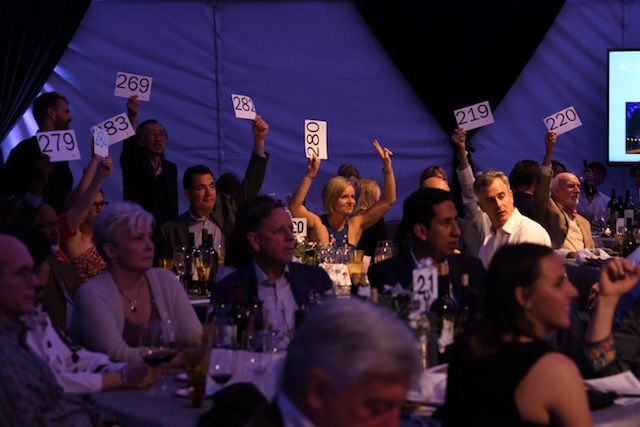 The spirited auction at Inspire, a three-day fundraiser for Alzheimer's disease research.

At 10 p.m. on May 4, Kerrin Laz stood tall at the stage and proudly announced “We did it! Without the online auction included, we raised $1.28 million this year.”

A huge reason to celebrate, given the extraordinary effort that went into the event. This year marked only the second installment of Inspire Napa Valley, an event that, driven by Laz, gives all the funds collected to the Alzheimer’s Association for research and treatment.

The event has come a long way from the beginning; it is not an easy task to organize and execute an event of this magnitude.

Laz, like many of the attendees and volunteers, has been affected directly by this disease that continues to hurt families around the world.

This year’s celebration included an Oakville Block Party hosted by Samantha Rudd at the Rudd Estate Winery in the heart of Oakville. The unprecedented event gathered a number of vintners, celebrities and wine writers including Ray Isle from Food & Wine Magazine, Time Magazine and other publications, Antonio Galloni, head of Vinous Media and a number of winemakers.

The dinner took place on May 3. Attendees who arrived from all corners of the U.S. were greeted with Champagne and Rudd Mt Veeder Estate Sauvignon Blanc. They were later led through the gardens and into the Boat House where Hog Island Oysters were shucked to order. There was an array of cult Oakville wines that included new vintages by Dalla Valle Vineyards, Vine Hill Ranch, Futo Estate and the elusive Screaming Eagle.

Dinner was served amongst the vineyards was cooked by a collection of vintners that included Francoise Peschon, Helen Keplinger and her husband DJ Warner, Brad Grimes, Remi Cohen and Galloni. The Sow Belly Trio provided music.

The wine was served by a group of local sommeliers who were there for the three-day event. Led by Lalo Vela from the Oxbow Wine & Cheese merchant, it included Laura Koffer from Gruppo Chiarello and Amanda McCrossin from Press Restaurant, the Rudd Team, and I had the honor of being part of the team.

The following morning at the Napa Valley Reserve, attendees gathered for a discussion from the Alzheimer’s Association team who explained the current state of the developments on the disease.

After the talk, supporters enjoyed a wine seminar led by Galloni in which the panelists chose two wines each that they felt were important in their life.

Starting with one of Napa’s matriarchs, Robin Daniel Lail, who chose the 2015 Inglenook Cabernet Sauvignon, explained the deep connection of her family’s roots to the property that was brought back to life by Francis Ford Coppola. She also shared the 2016 Lail Vineyards J. Daniel Cuvée Cabernet Sauvignon, which signifies the continuation of her work under Philippe Melka’s wine making skills.

Ray Isle chose the 2014 Spottswoode Cabernet Sauvignon, which, he explained, had a deep connection as Spottswoode was part of his first wine-writing career work. The other wine he brought was the 2016 LAZ Cabernet Sauvignon, crafted by Celia Welch from selected fruit of some of the top Napa Valley sites. Elegance, power and complexity describe this wine.

Andy Eriksson, a successful winemaker celebrated for his skills brought the 2004 Mayacamas Vineyards Cabernet Sauvignon, a wine that’s gracefully aging, characterized by dried violets and spice. He’s a big fan of this winery, which has deep roots as one of Napa Valley’s pioneers, where he now serves as winemaker. The other wine he brought was his own project, the 2015 Flavia Cabernet Sauvignon from Coombsville full of berries, cocoa and a touch of spice.

The last of the panelists was Remi Cohen, who is chief operating officer for Cliff Lede Vineyards. She related her story, which began as a vineyard manager and led her to overseeing Cliff Lede Vineyards. She shared the 2010 Colgin Estate “Cariad” showing a beautiful array of licorice, youthful minerality and bursts of red fruit. Her second choice was the 2012 Cliff Lede Poetry Cabernet Sauvignon with depth, black fruit and a muscular tone from one of Napa’s most famed vintages.

The celebration continued with the main event, the two-part program held at the newly renovated Estate Yountville at the Villagio. At 4:30 p.m., a group of Napa Valley wineries convened to share their newest releases in a walk-around format that allowed for comparison and convention with the vintners themselves. Some of the participating wineries included Bryant Family Vineyards, Melka, Morlet, Realm, Staglin, Grounded Wine Co, Ad Vivum, Harlan Estate, Amuse Bouche and Memento Mori. Certainly no shortage of incredible wines all in one room.

The gala dinner started at 6 p.m., where an estimated 300 attendees gathered at their tables. The energy was hard to describe as guests in each table enjoyed the bounties of the most famed vineyards and shared it with the crowds. The opening remarks were by Laz and co-chair and benefactor Bettina Bryant, who thanked everyone who made it from near and far here. The generosity started to pour out as the live auction started. The first one of many was a 6-liter bottle of Schramsberg Vineyards Blanc de Blanc served with caviar to share. The highest bidder, who set the tone for the evening, was Bettina Bryant, at $6,000. Other auction lots followed as the party continued. Antonio Galloni auctioned a lot of his own wine, the inaugural vintage of Antonio Galloni Cabernet Sauvignon; the lot included several large-format bottles for one lucky winner, which later turned into two as he doubled the lot.

Other exciting pieces included sideline tickets for the Golden State Warriors games, a Rhône Valley River tour, visits to Bond Estate in Oakville, a tour and tasting with Tor Kenward from Tor Wines, a lot that included Screaming Eagle bottles and a way onto their mailing list.

All in all, it was an incredible gala with no shortage of generosity, which ultimately made this event so successful.

The following day, Chef Thomas Keller provided a location and a memorable bounty of his fried chicken to celebrate a farewell VIP Brunch alongside wines by Hourglass, the Tres Perlas Estate by the Renteria family and Sean Larkin’s famous cans.

An impressive event indeed that promises an even bigger production next year from Kerrin, Bettina and the whole team that made it possible.

The Morlet Selection has been ordered to pay a former employee more than $28,000 because the company withheld sick leave wages.

The spirited auction at Inspire, a three-day fundraiser for Alzheimer's disease research.