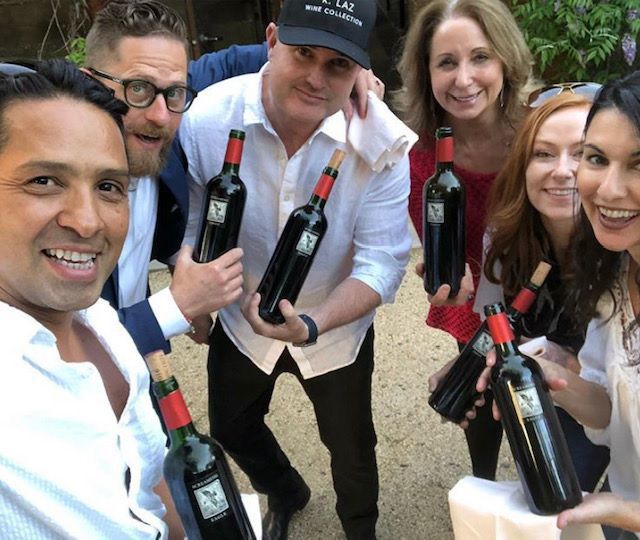 As the decade winds down and we look brightly into 2020, here is my annual tradition — highlighting the top experiences of 2019.

Looking back, this year has brought many excellent memories worth sharing. 2019 took me to many cities from Verona to London, the Hawaiian Islands and small areas of Japan enhancing my views and creating strong bonds with new friends.

In chronological order, here the list that makes me smile, and I wonder what the new year will bring.

In early January, my childhood friend Luis and I went on a last-minute road trip to Southern California. On the way back and with very little planning, we stopped to visit our long-time friend and talented vigneron Marco Lucchessi in Buellton.

We didn’t know what to expect. We knew he is quite talented and he has dedicated the last few years to honing his winemaking skills, and I’ve been a fan of his project for years. We met Marco early in the morning and went to the warehouse where he makes Section Wines. While unassuming and industrial on the outside Marco managed to create a one-of-a-kind experience inside. Full of the original art of his labels, resting wine in barrels and ambient music (Marco is also a professional DJ) we tasted through the line-up that included Arneis and a compelling Super Tuscan Blend.

The whole ensemble was quite remarkable and left a fantastic memory of Marco’s efforts.

In February, I received an invitation from long time friend, mentor and PR man Tim McDonald to visit the newly minted Bently Heritage Distillery in Minden Nevada. The day trip consisted on jumping on a private plane early in the morning in company of some of my favorite journalists. Upon landing, we headed to the distillery where we made cocktails and learned some tricks from master mixologist Tony Abou-Gabim who is the mastermind behind The Modern Mixologist. The state-of- the-art facility, together with the camaraderie of the group, made for an excellent way to spend the snowy February day.

Late February and March consisted on the first two trips to Japan yielding a collection of unique scenarios. The most memorable instance happened in the Yamagata mountains. After attending Niigata Sake No Jin with two of my closest friends, Jorge and Luis, we took a bus from Niigata to meet one of Jorge’s friends in Yamagata City. After playing tourists and visiting the Yamagata Castle we enjoyed a once-in-a-lifetime dinner at the celebrated Pas Mal restaurant owned and operated by talented Chef Yusuke San. The dinner, which only could have been compared to The French Laundry and Single Thread Farms, consisted of a roller-coaster of flavors and textures paired with some iconic Sakes and Napa Valley wines.

April proved to be an Italy month, the 10-day trip covered many cities, from Verona to Florence and Rome. Aside from visiting the Ronchi di Cialla Estate in Friuli, the most memorable experience happened near Bassano de Grappa where we stopped at Capovilla, the brainchild of Vitorio ‘Capo’ Capovilla. The visit included a tour and tasting out of tank from the Capo himself and his grandson Alvise.

After the educationally charged visit, we headed to a locals’ spot to enjoy the seasonal festival of white asparagus served in various ways and paired with three different Vespaiolos (northern Italian white wine). The trip, organized by Cristian Valbruzzoli, forever will be seared in our memories.

May was fully charged with excitement, from Inspire Napa Valley (An Alzheimer’s research fundraiser led by Kerrin Laz) where hundreds of attendees gathered to celebrate Napa Valley with showing generosity to one of the most awaited events of the year, BottleRock Napa Valley. The music, food and beverage festival shined with excellent acts highlighted by Neil Young and Citizen Cope crowned with Chef Morimoto breaking a record on stage and outstanding food and wine choices.

An homage to Japanese culinary culture occurred in June. Cadet Wine Bar partnered with Chef Curtis and Jessica from Miminashi to host a fun evening full of bento boxes and sake cups that attracted a huge following. I hope this happens again soon.

July took me to London for the first time; the excuse was to accept an award with one of my favorite Sake producers, Takeda San from Niigata’s Takeda Shuzo. The event and the city did not disappoint, yielding a number of new friends and a love for this city.

Also in July, I was invited to judge the Las Vegas Global Spirits Awards, which turned out to be very fun. Hands down, the highlight of the trip was paying a visit to one of the bar masters and an incredible person, Francesco Lafranconi, who had recently opened the doors of his new bar, Mr. Coco’s. The visit was hard to top, cocktails, presentation and ambiance show that Francesco is on top of his game.

August brought me back to Japan, this time to judge at the Japan Wine/Sake Challenge in Tokyo. This time, limited to Tokyo, which is not limiting at all. I got to visit one of my favorite spots and in some way home away from home, SG Club in Shibuya. Led by Shingo Gokan, one of the most awarded bartenders of our generation he’s managed to create a welcoming and mind-blowing atmosphere with thoughtful cocktails and hospitality like no other. During this trip, I was invited to dine at one of the most intellectual and textural eateries I’ve been to. The name Firenze Sake, a place I visit in my dreams often. Giorgio San has managed to create a tiny 10 seat restaurant into a haven for Italian inspired food and out of the box sake selections.

In August, there was sunshine, Maitais and Coconut Crusted Mahi Mahi at Duke’s in Oahu, a visit to Art House by Donna Kopol and John Bonnick with an al fresco lunch full of stories, and an unexpected multicourse and wine experience at Louis Martini Winery with out of town friends.

September can be best summarized by the word Sake. I had the pleasure of being invited by the Somm TV crew to film a Sake Master Experience, Sake 101 and a podcast in Los Angeles. The team, which produced the Somm Movies and many other educationally rich content, launched a platform called SOMMTV where just like Netflix, you can access anything on demand.

October’s standouts include the 5th annual Crush Challenge organized by the DeLeuze Family from ZD Wines benefiting Parkinson’s research and Boys and Girls Club amongst other recipients. I was asked to be the guest Somm for the main event, which turned out to be a lot of fun.

Also in October, the highly anticipated English version release of Drops of God, an instant sensation with millions of followers worldwide. One of the events took place in Napa where the authors sister and brother team, Yuko and Shin Kibayashi attended and I was able to interview them while sipping on some of California’s top wines. The English edition is accompanied by a wine app and a wine shop soon.

In November, the 39th edition of the San Francisco International Wine Competition took place. This year yielded a solid line-up of wine and sake. The panel I was on consisted of Dr. Rowald Hepp, Schloss Vollrads Estate Director in the Rheingau and Toshio Ueno, Sake Samurai and recognized Sake scholar. The winners included Heaven Sake Junmai Daiginjo, Champagne Collet and from Russian River the Best Wine of the competition, Fog Crest Pinot Noir.

In terms of a theatrically charged dining experience, we visited Omakase SF. The multi-course sushi-inspired dinner was full of intricate flavors, textures and visually spectacular bites paired with a number of sakes that spoke to different regions and methods of production. This gem is run by Master Sushi Chef Jackson Yu. Worth visiting over and over.

December started with a visit to Hawaii’s Big Island. The trip included my first time trying Kava, a native root consumed in some sort of cold tea out of wooden bowls in a ceremonial fashion. The indescribable feeling is in some ways numbing but comes with a happy feeling attached. A thrill worth trying at least once.

Many more memories completed this bountiful year. May 2020 bring more excitement, health and friendships to you! Cheers!

Ehlers Estate will host “Taste of Bordeaux,” a river cruise combining the best of Napa and Bordeaux, May 14-21.