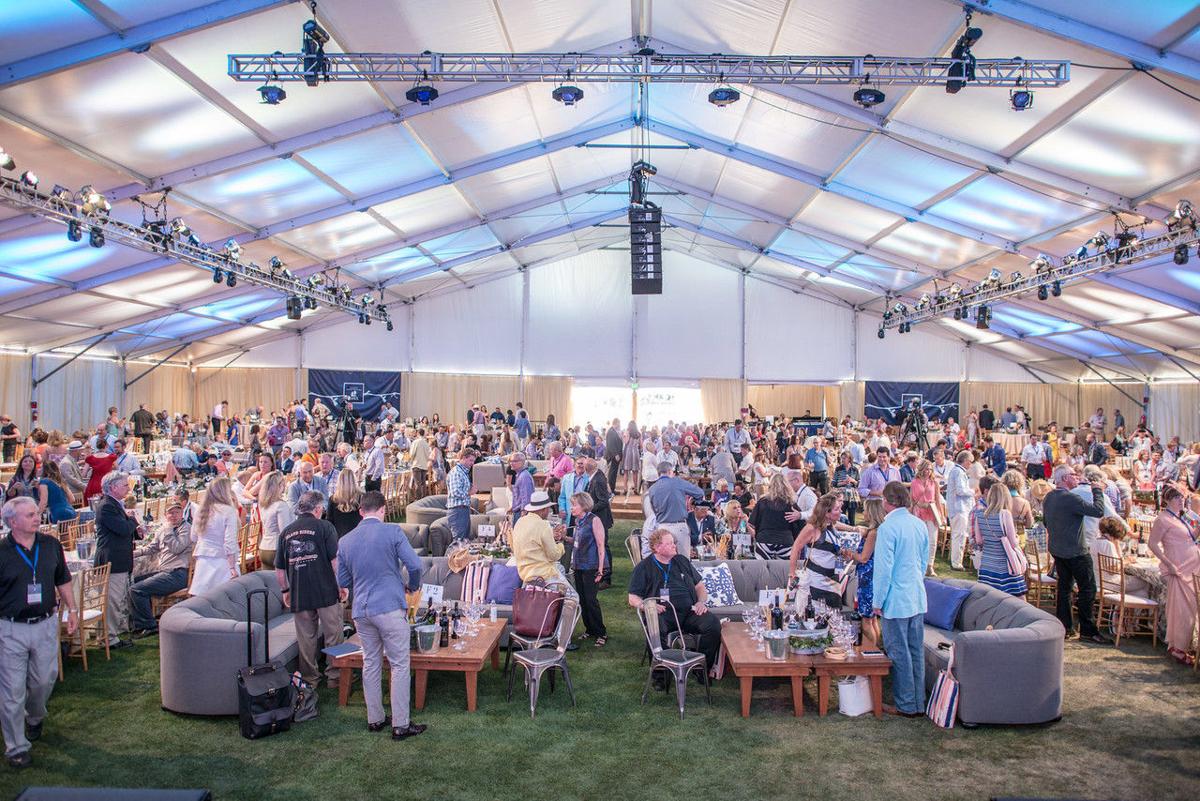 Some 850 guests, along with vintners, media and Napa Valley Vintners staff and volunteers, filled the huge 60-by-40-meter air-conditioned tent erected on the fairway at Meadowood Resort in St. Helena for last weekend's Auction Napa Valley 2015. In addition to the usual tables and chairs that ringed the space, a bubble lounge with comfy sofas were also provided for returning bidders. 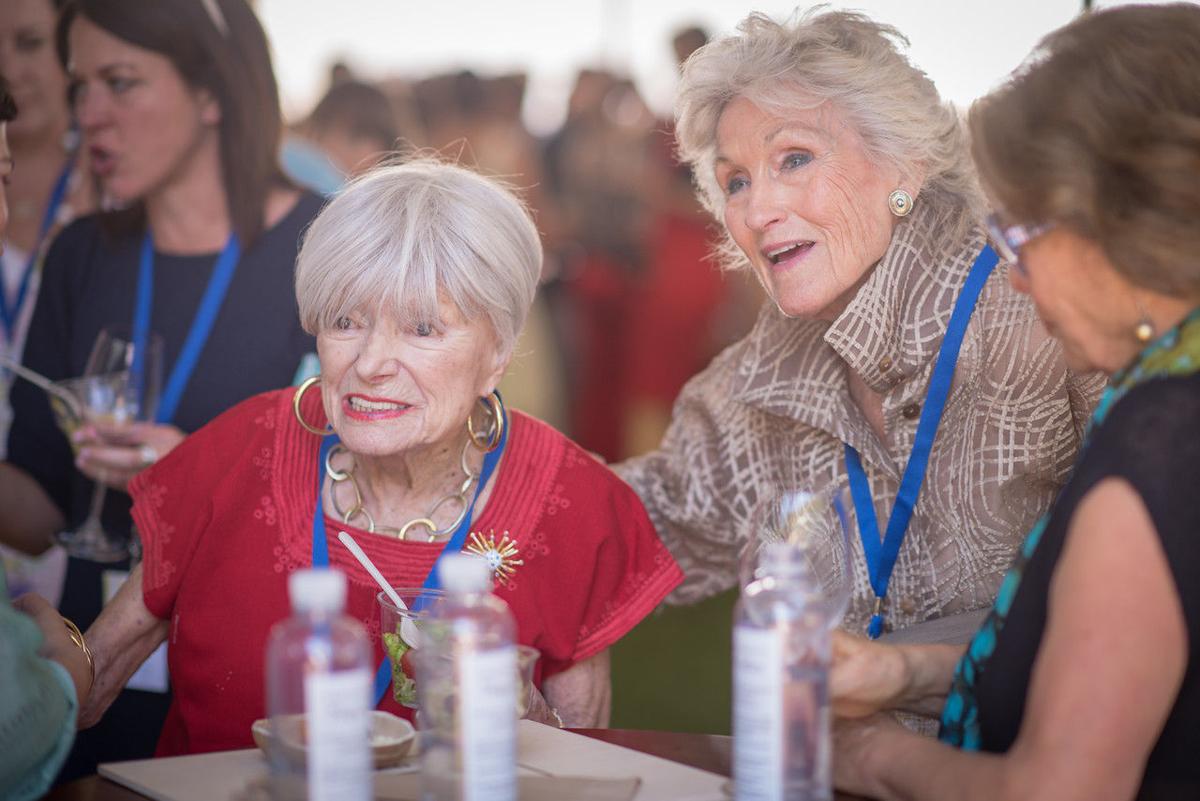 Margrit Mondavi, left, and Molly Chappellet were two of the attendees at the 35th annual Auction Napa Valley last year at Meadowood Resort. Both ladies have been involved with the country’s most successful charity wine auction since its inception in 1981. 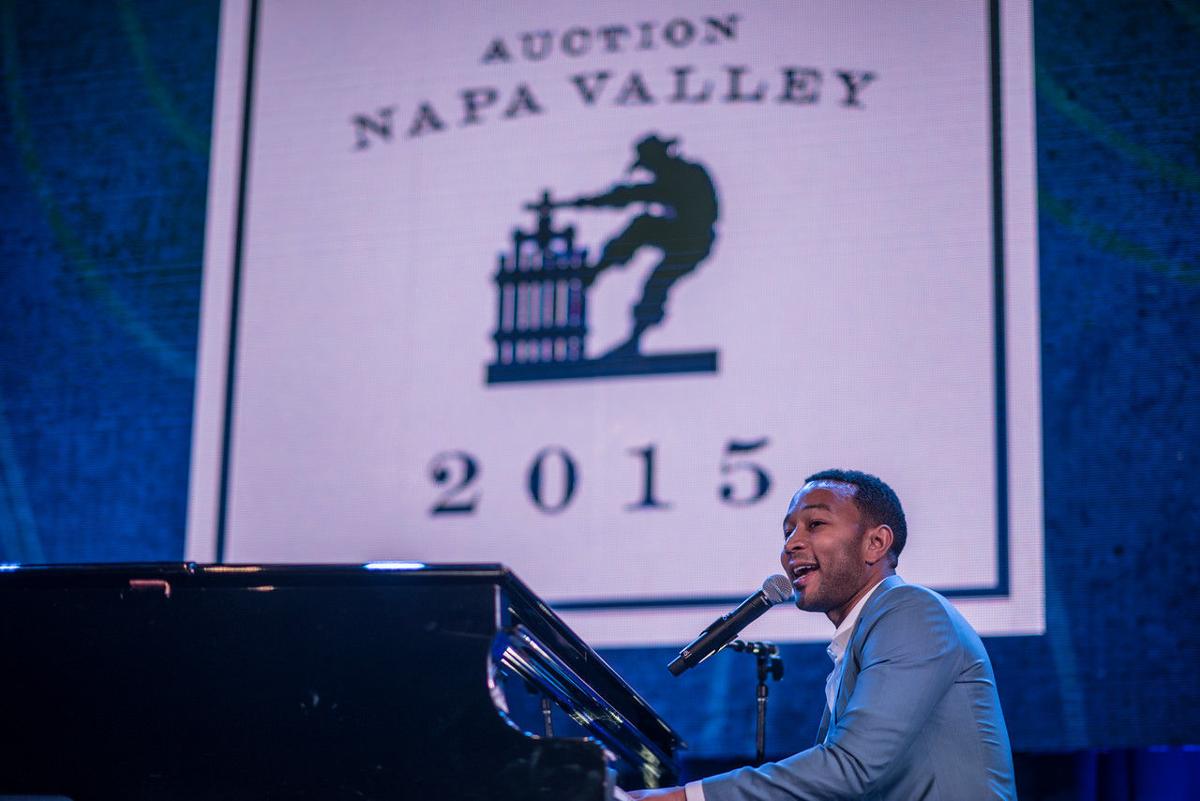 In a surprise appearance at the 35th annual Auction Napa Valley, Oscar and Grammy Award-winning singer/songwriter John Legend performed his hit ballad, "All of Me." Legend collaborated with Raymond Vineyards owner Jean-Charles Boisset for an auction lot that included a dinner concert for 30 at Boisset's home on Wappo Hill and some wine from the soon-to-be-launched brand collaboration between artist and vintner.

Some 850 guests, along with vintners, media and Napa Valley Vintners staff and volunteers, filled the huge 60-by-40-meter air-conditioned tent erected on the fairway at Meadowood Resort in St. Helena for last weekend's Auction Napa Valley 2015. In addition to the usual tables and chairs that ringed the space, a bubble lounge with comfy sofas were also provided for returning bidders.

Margrit Mondavi, left, and Molly Chappellet were two of the attendees at the 35th annual Auction Napa Valley last year at Meadowood Resort. Both ladies have been involved with the country’s most successful charity wine auction since its inception in 1981.

In a surprise appearance at the 35th annual Auction Napa Valley, Oscar and Grammy Award-winning singer/songwriter John Legend performed his hit ballad, "All of Me." Legend collaborated with Raymond Vineyards owner Jean-Charles Boisset for an auction lot that included a dinner concert for 30 at Boisset's home on Wappo Hill and some wine from the soon-to-be-launched brand collaboration between artist and vintner.

While the aggregate failed to eclipse prior Napa Valley Vintner events, many components of the 35th annual Auction Napa Valley did set records, raising a total of $15.8 million for health care and children’s education locally.

The auction chair’s lot — donated by the French and American team at Opus One — provided the successful bidder with a two-week visit to 11 of the most prestigious wine estates in Europe along with a 35-year vertical collection of Opus One magnums. It was initially auctioned off for $800,000. But when two additional bidders indicated they would pay a like amount, the Opus One team agreed to host not one but three couples on the European visit. That lot raised $2.4 million, becoming the top grossing lot of all time.

A surprise appearance by Grammy- and Oscar-winning singer/songwriter John Legend brought added excitement to the Saturday afternoon event. Legend collaborated with Raymond Vineyards owner Jean-Charles Boisset on a lot that includes a private concert following a dinner party for 30 at the vintner’s home on Wappo Hill. His exceptional rendition of the chart-topping “All of Me,” for which Legend accompanied himself on the piano, prompted another vintner, Rick Jones, to offer $850,000 for the very special lot. Legend offered to provide a pair of concerts if two bidders were willing to pledge $1 million each. There were no takers. The lot also includes wine from a new joint venture between the artist and the vintner — a cabernet and chardonnay project called LVE.

While spirited bidding occurred as some of the lots went on the block, it seemed paddle holders were a bit more circumspect this year. On numerous occasions, auctioneers Fritz Hatton and Humphrey Butler coaxed bidders to raise their paddles or up the ante. At one point, Hatton said he’d risk a heart attack just to get one bid up to the next level.

As a result, there were a number of steals — vineyard tours, accommodations, meals and more for a Napa Valley stay along with wine from Napa Valley Grapegrowers went for $40,000; a Las Vegas experience for two couples offered by Charles Krug Winery saw a top bid of $50,000; plus the Oakville Winegrowers lot of 33 magnums and Festival del Sole VIP passes for three days raised but $60,000.

In addition, the new Flash Lots element of this year’s auction didn’t generate the interest Napa Valley Vintners hoped it would. A total of 10 lots — sold off about midway through the event — were offered at a starting bid of $100,000. If there were no takers, the bid offer dropped at $10,000 a clip until the first paddle went up. One lot went for $80,000 — Jameson Ranch Vineyards’ offer to host two couples at the KAABOO Music Festival in Del Mar — while three weren’t snapped up until the bid offer dropped to $20,000. What had the potential to raise $1 million instead brought in $360,000.

The $160,000 bid for Bill Harlan’s Bond lot — a vertical tasting for 10 of all Bond wines (15 vintages, comprising 62 wines) followed by dinner, accommodations at Meadowood Napa Valley and a double magnum for each couple to take home — was yet another bargain compared with what bidders paid for Harlan’s wines at previous auctions.

A likewise bargain was the $140,000 paid for the Alpha Omega lot of a first-class trip to New York City for two couples with opening night tickets to the Metropolitan Opera, a backstage toast with soprano Anna Netrebko, plus Chopard jewelry, plus a Napa Valley stay with a chef’s table dinner at The Restaurant at Meadowood.

However, there was plenty of excitement and willingness to spend big bucks for the top live auction lots of the day. They included:

— Napa Valley Vintners Fund-A-Need, no amount disclosed. According to a spokesperson for Napa Valley Vintners, “we made a decision this year not to release specific dollar results on most of the lots.” (David Pearson, Opus One CEO, said the partners — the children of the late Baroness Philippine de Rothschild and Constellation Brands — each pledged $300,000 to this year’s fund.)

— Alejandro Bulgheroni Estate’s invitation for two couples to visit his Napa Valley wine estate as well as wine operations in both Uruguay and Argentina, plus a double magnum of the inaugural 2014 Napa Valley cabernet sauvignon, $600,000 (tripled on bids of $200,000 each).

— Vine Trail bike ride from Napa to Yountville next June offered by 10 vintners, buy-ins were $5,000 each, with a pair of grand marshals paying $95,000 each; total not provided by NVV.

— Staglin Family Vineyard’s offer to 10 top bidders of a case of 2013 cabernet sauvignon in custom-designed bottles, plus dinner and accommodations at the wine estate, a total of $350,000.

— Colgin Cellars’ collection of double magnums of its hard-to-come-by syrah, cabernet and cabernet blend, plus Italian fashion from Cucinelli, $320,000.

— Hestan Vineyards’ cruise of the Italian coast — Portofino to Cinque Terre — aboard a private yacht and dinner for eight at the French Laundry, $320,000.

Other lots of note included a 50-year vertical of sparkling wine from Schramsberg Vineyards. Louisiana’s Red Adams, a regular at the auction over the years, offered $250,000 as a tribute to the late Jamie Davies, who founded the winery with husband Jack a half-century ago. A classmate of Jamie Davies, Adams will get benchmark Schramsberg sparkling wine and Davies red wine selections representing every vintage from 1965 through 2014.

The Robert Mondavi Winery lot brought a top bid of $200,000. It included a blending session with the winemaker and a private label designed by Margrit Mondavi, four paintings by the widow of the industry icon, a dinner party for eight and a white MINI Cooper convertible like the one Margrit drives.

Vineyard 7 & 8 offered a 2005 Morgan Roadster as part of its lot, along with three dozen bottles of its Spring Mountain cabernet sauvignon, plus accommodations and dinner at the estate. It sold for $190,000.

Trips to Rome, Hong Kong and Las Vegas, along with airfare, accommodations, meals and a piece of Bulgari jewelry were offered by Blackbird Vineyards. That lot was snapped up at $260,000.

A tasting for eight of rare Shafer Vineyards vintages, plus dinner and 10 magnums of Shafer Hillside Select from vintages dating from 1987 brought a top bid of $220,000.

Chairing next year’s auction will be Agustin Francisco Huneeus. “Being a second generation to host Auction Napa Valley is a huge honor and a great reminder of the progress we have made in the Napa Valley,” he said, noting his father, Agustin Huneeus, had chaired the charity event two decades ago. “It also underscores the fact that building one of the great wine appellations in the world requires focus and passion, but it also takes time — generations.

“In this spirit, the theme of next year’s Auction Napa Valley 2016 will be ‘Generations,’ celebrating the generations that came before us and gave us our heritage, as well as the generations to come with their own new ideas and passion.”

One topic I wish Pierce would report on is the range of amounts offered for different cases in the barrel auction. Some of the superstars went for big bucks, others less so. But what is really interesting are the figures for the non trophy, but still outstanding Napa Valley Cabs where the 10th case was snapped up for as low as, what, $200 or $300. Those bidders got incredible deals.

Take us with you wherever you go! Sign up to get the E-edition in your inbox →

How much do you know about Valentine's Day?