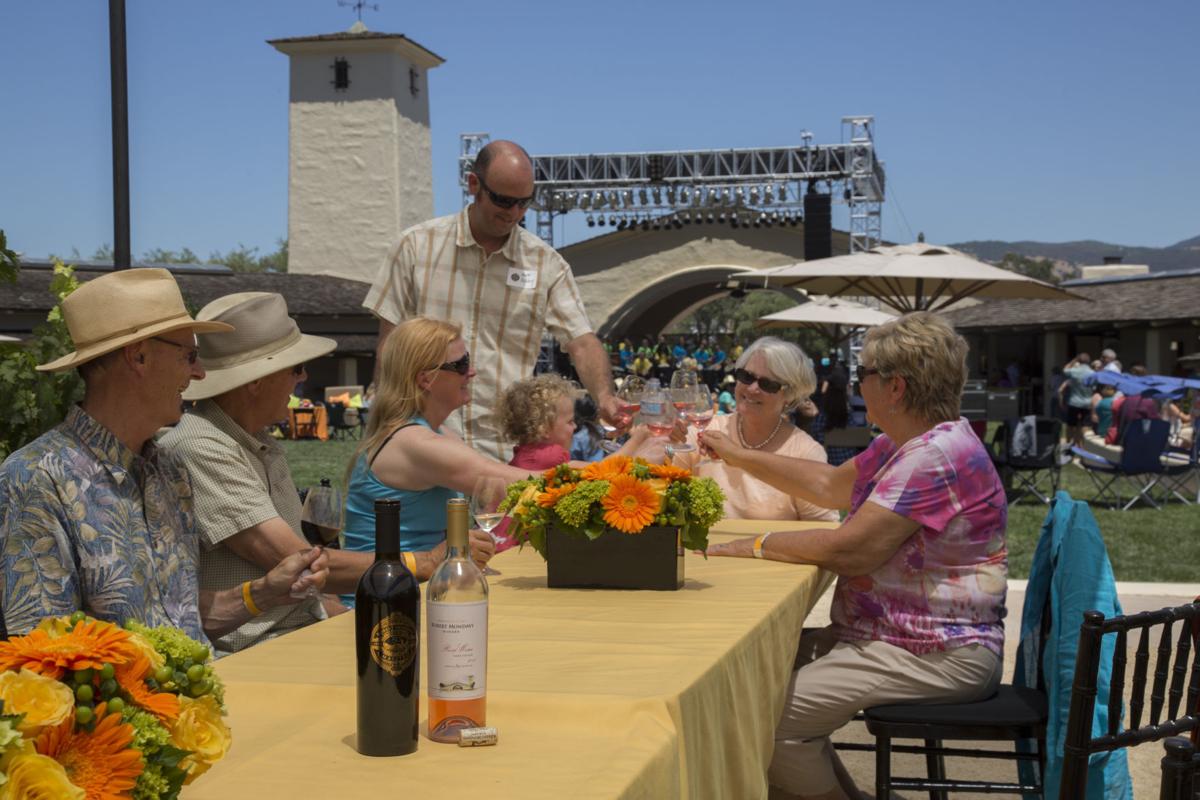 A huge crowd of locals and visitors from all over the world turned out on July 16 to help celebrate the founding of the Robert Mondavi Winery 50 years ago. 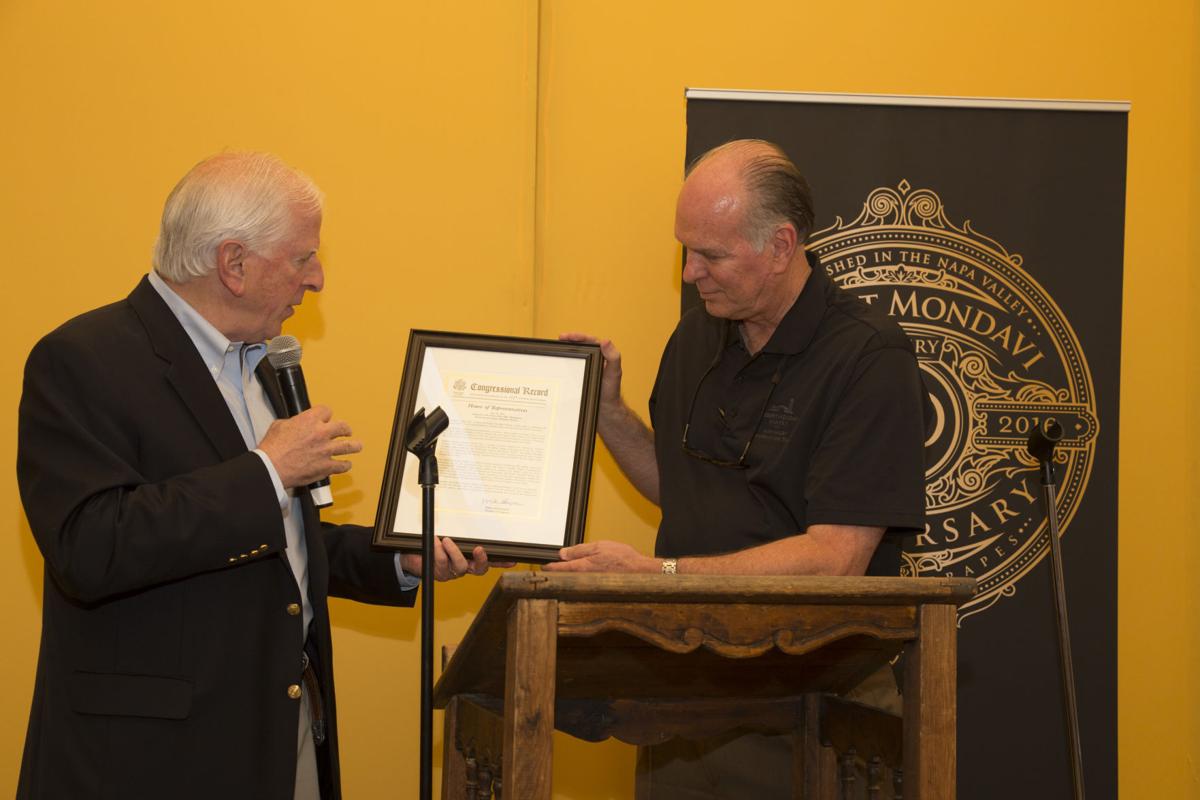 Recognizing Robert Mondavi’s bold venture in launching his own wine brand 50 years ago, Congressman Mike Thompson, D-St. Helena, left, presented Glenn Workman, general manager of the Robert Mondavi Winery, with a Congressional proclamation last weekend. In his remarks, Thompson said vintner Mondavi “woke up the wine industry” when he opened the doors to his winery in 1966.

Someone bemoaned the fact that Robert Mondavi was not on hand last weekend to celebrate the launch of his namesake winery in Oakville half a century ago.

As fast as that statement was made, the individual took back his words because he realized that Bob Mondavi was, indeed, all around us.

Not only was he present in the magnificent wines that continue to be made in the world-renowned cellar along Highway 29, he was present in the hearts of all the past and present employees who turned up for the golden anniversary party.

Bob Mondavi was standing tall in the minds of local officials who’d come to remind us of the good he’d done in addition to opening the iconic Napa Valley winery.

“He established this winery two years before the ag preserve was enacted,” declared Napa County Supervisor Diane Dillon. “He set an example for the valley ... a demonstration of what this valley could be ... saving it from a fate it could otherwise have had.”

“Bob Mondavi woke up the wine industry,” Rep. Mike Thompson agreed. Along with his widow, Margrit, vintner Mondavi “helped establish the wine auction, which has so far contributed more than $150 million to the community. Bob will always be here.”

The cheerleader for Napa Valley’s wines was also present in the thoughts and deeds of the four guest chefs — Victor Scargle, Cindy Pawlcyn, Bob Hurley and Giovanni Guerrero — who prepared mouthwatering treats to pair with Mondavi wines at afternoon cooking demonstrations. For Bob, pairing great food with his wines was top priority.

There was also music, and local musicians celebrated as well the generous industry leader for he was roundly known as a champion of fine and performing arts.

Last Saturday’s celebration took place on the actual date — July 16— of the winery’s groundbreaking in 1966, noted Glenn Workman, winery general manager who first joined the Mondavi team in 1975. It was a special day for Mondavi, not only for the launch of his own wine brand but because it was also the day on which his only daughter, Marcia, was born.

It didn’t take long for this forward-thinking vintner to get the attention of consumers at home and abroad but also that of respected industry leaders like France’s Baron Philippe de Rothschild who teamed up with Bob on the joint venture they named Opus One.

That earned him considerable global fame. But for Bob Mondavi it was all about wine and wine quality.

Sure, he was pleased in 2002 when he was awarded the Order of Merit of the Italian Republic; then thrilled in 2005 when he received the Legion of Honour from the French government. I was on hand to see his broad smile and hear his humble remarks two years later when California Gov. Arnold Schwarzenegger inducted Bob into the California Hall of Fame.

And I’m sure Bob was beaming last weekend when he saw that sons Michael and Tim turned out for this milestone event, the first time they’d been back on the property together since it was sold to Constellation in 2004.

Michael informed us there were only three employees at Robert Mondavi Winery in the summer of 1966. “Most of the people at the groundbreaking are on the other side of the grass,” he quipped.

He recalled his father’s attempts to secure financing for the new winery. Bank of America brass asked what he had for collateral. “A wife, three children and their clothes,” Michael said was his father’s reply.

“Bill and Ina Hart loaned us the money to let us start the winery. We weren’t bankable then.” Bob’s oldest son also recalled that his monthly paycheck at the time was only $650 and that his wife, Isabel, helped in a number of capacities, including forklift driver.

“We had an inspired leader,” added son Tim, who heads up the Continuum wine project shared with his sister and children. “It was all about doing the best. Dad’s tenacity brought California wine to life. He awakened the wine world.”

“Thanks for the memories,” Tim concluded, with a nod to Workman and current winery staffers.

“Thank you for keeping the Mondavi style and image where it is,” added his brother.

A Robert Mondavi protégé and director of winemaking for the past 19 years, Genevieve Janssens noted the winery’s founder was “a true visionary. It is an honor to be the torchbearer of his vision and the steward of our cherished To Kalon Vineyard. It is a pleasure, as well, to mentor the next generation of winemakers — sharing his wisdom with them, to ensure that his enduring legacy will be preserved well into the future.

“The future is bright. As Mr. Mondavi says, ‘This is just the beginning.’”

A huge crowd of locals and visitors from all over the world turned out on July 16 to help celebrate the founding of the Robert Mondavi Winery 50 years ago.

Recognizing Robert Mondavi’s bold venture in launching his own wine brand 50 years ago, Congressman Mike Thompson, D-St. Helena, left, presented Glenn Workman, general manager of the Robert Mondavi Winery, with a Congressional proclamation last weekend. In his remarks, Thompson said vintner Mondavi “woke up the wine industry” when he opened the doors to his winery in 1966. 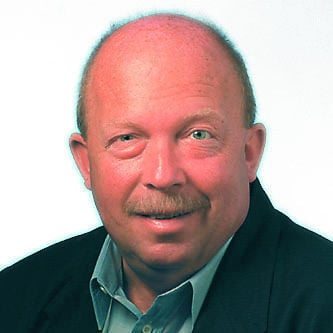