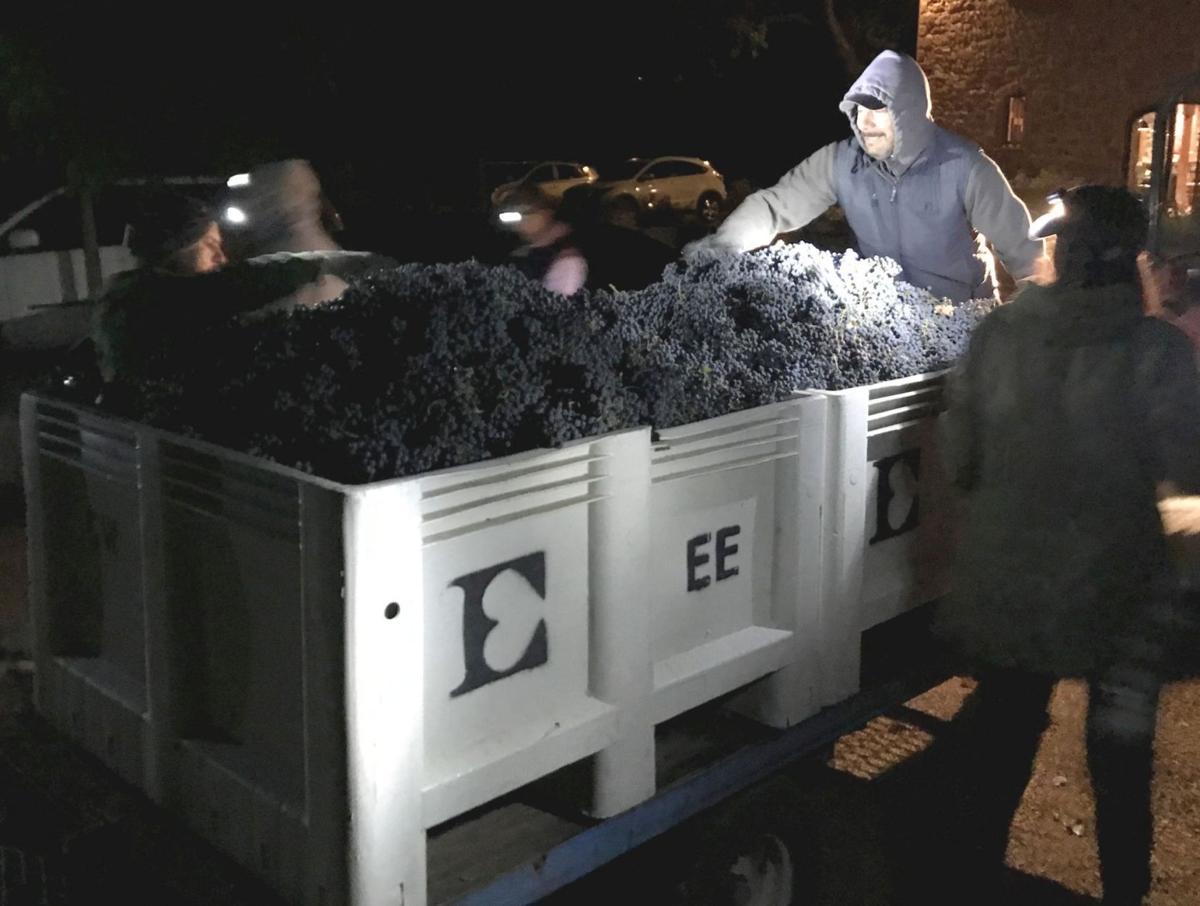 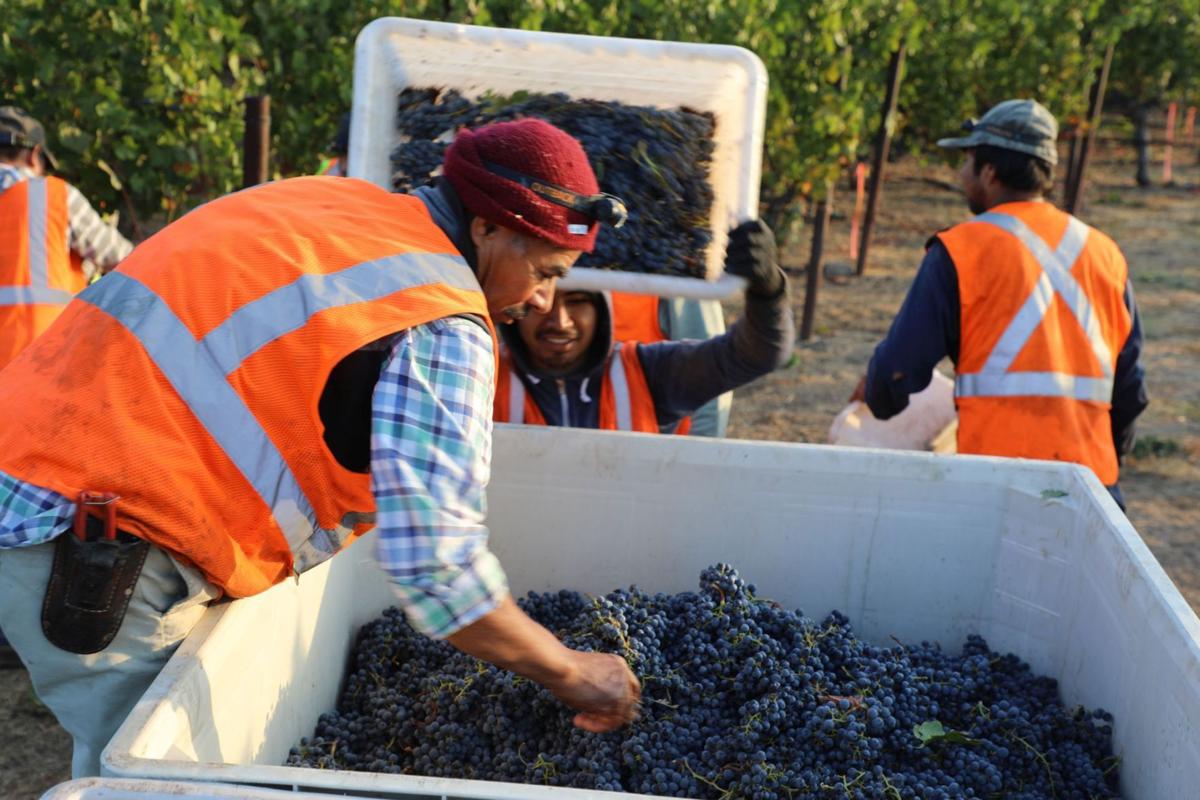 With current moderate temperatures that are expected to continue, the harvest of the grapes in the Napa Valley has slowed down, allowing vintners and workers a chance to take a breath and allowing cabernet sauvignon grapes more time to ripen.

From north to south, the reports from the Napa Valley’s American Viticulture Areas (AVA) are as follows:

Matthew Crafton, Chateau Montelena Winery, “Cooler weather midweek, punctuated by a few nights in the upper 30s, gave us the opportunity to catch our collective breaths and reassess the vines more carefully. The little rain we received last Tuesday and Wednesday certainly brought some mugginess (and reminded me why I don’t miss the East Coast) but mostly washed the dust off the berries without any further concern. It seems like judicious irrigation is starting to pay dividends as canopies are still healthy and ripening continues. Most of us in Calistoga have turned our attention to cabernet, although there is some zinfandel and petite sirah still hanging on the western and southern edges of the AVA.

Alan Pierson and Erin Smith, O’Shaughnessy Estate Winery, “The heat wave is behind us and we have assessed that we’ve made it out relatively unscathed with only a few areas of dimpling. Now with more moderate weather forecasted in the coming weeks, we can expect to have more hang time. This is ideal for the ripening and maturity of the fruit. We are currently over 100 days from bloom, and are expecting to start picking around the first week of October.”

Dawnine Dyer, Dyer Vineyards, “We’re now in the ‘hurry up and wait’ phase of the growing season on Diamond Mountain. Most of the non-cabernet varieties are off the vine — Rudy von Strasser has picked his zinfandel and petite sirah. He and others are reporting the start of merlot, malbec and young or stressed cabernet. Vineyards that have picked are reporting lower than normal yields. This week has been about assessing how well the many cabernet vineyards rebounded from the epic heat of August, September and so far it looks promising. There should be more to report next week.”

Alexander Eisele, Volker Eisele Family Estate, “Cool overnight lows and foggy mornings, a significant slowdown. First, we anticipated an all around early harvest and now things are getting to be more and more ‘normal.’ A little more zinfandel, merlot and petite sirah picked this week with all being harvested 10 to 14 days earlier than last year. No reports of any cabernet so far. Let’s hope that the acids begin to move this week which would put them back on pace with the brix.”

Stuart Smith, Smith-Madrone, “Continued cool weather is putting smiles on all of us. This no-need-to-rush picking is creating a lovely no-stress harvest. ‘Not doing much,’ is how Ron Rosenbrand of Spring Mountain Winery summed up this week. Andy Schweiger added that they’re ‘taking our time’ and picking a little cabernet as it reaches perfection. Cain is doing the same with merlot and maybe some cabernet sauvignon by week’s end. And Keenan picked some cabernet and cabernet franc at the beginning of the week. Most other wineries like Paloma, 7 & 8 and Stony Hill will likely not get serious about the reds until next week.”

Kevin Morrisey, Ehlers Estate, “At Ehlers Estate we’ve been harvesting a little merlot and cabernet every night this week. The marvelous merlot is now all in. There was a little damage for sure from the intense heat over Labor Day, so we’re picking about 10 days earlier than usual. We have two more small cabernet blocks to bring in Monday and Tuesday, and then we’ll probably wait a little for the rest of the cab, and the cabernet franc and the petit verdot. The fermentations are just now beginning to cook so it’s a bit premature to assess the wine quality, but I’m optimistic. Friday was our annual staff pick, so the entire company was out there at 4 a.m. picking alongside our regular guys — I’m not convinced that the office and hospitality teams actually sped up the picking, but we all came away dirty and tired and it was a heck of a lot of fun.”

Kristin Belair, Honig Vineyard & Winery, “After a hectic couple of weeks, having the rush of grapes slowing to a trickle is most welcome, for a few days anyway. Sauvignon blanc lots are going dry (finishing fermentation) on almost a daily basis now. On Monday, we received cabernet from St. Helena and Calistoga, with a little more expected from St. Helena later in the week. Fruit from these vineyards is typically the first cabernet sauvignon we get in. Rutherford cabernet will not be far behind. The cool weather will afford us some ‘hang time’ allowing flavors and tannins develop to perfection and a moment to catch our breath.”

Linda Neal, Tierra Roja Vineyard, “Curtis Strohl, B Cellars, sums it up for me, talking about the vines’ resilience after the heat: ‘So beautiful to work with such vibrant, strong, and intricately calibrated living things.’ Most vintners reporting were breathing a sigh of relief, brought on by the deceleration of the cooler weather. Russel Bevan stated, ‘After the heat of the previous weeks, the cool down has allowed the vines that catch their breath and bounce back.’

Tierra Roja, Grapes of Raithe, B Cellars followed others from the Eastern side, picking their cabernet sauvignon. While Goldschmidt, Hoxey, Paradigm, Saddleback and others are nearly there, picking merlot and zinfandel with cab to follow.”

Anthony A. Bell, Bell Wine Cellars, “A cooler week has seemed to play in our favor, slowing things down and allowing flavors in red varietals to catch up in the vineyard. We harvested Yountville chardonnay this week and have begun pressing off the early red varietals. We are beginning to see lovely flavors develop in our Yountville cabernet vineyards and expect to be harvesting these vineyards soon.”

Gabrielle Shaffer, Stagecoach Vineyard, “From Atlas Peak, and valley wide, the shift to cooler temperatures has markedly slowed the harvest momentum we had started. Brix levels have been stalled and we’ve seen many picks postponed in hopes of further ripening. We’re starting to see some of the vines get a bit tired from the roller coaster of summer weather we had. At this point we are poised and ready to shift into high gear and hopeful that the weather will cooperate to get us through the season.”

Elizabeth Vianna, Chimney Rock winery, “The theme of the week for winemakers in Stags Leap District seemed to be ‘slowing down.’ We all enjoyed the perfect temperatures and further time to achieve phenolic ripeness. Marcus Notaro, winemaker at Stag’s Leap Wine Cellars, reports that some of his upper blocks of Fay and SLV were harvested last weekend. Jon Emmerich, winemaker at Silverado Vineyards said he was, ‘Slowly moving into cabernet sauvignon in our SLD vineyard.’

“Remi Cohen echoed, ‘At Cliff Lede, our pace for harvesting has slowed with the recent cooler temperatures, but we are still continuing to harvest our estate cabernet.’ She reports to be at the halfway mark. Elias Fernandez at Shafer Vineyards reported finishing merlot and malbec and expected to be harvesting some hillside cabernet this week. Michael Beaulac at Pine Ridge tells me they too, ‘relaxed a bit with cooler weather.’ At Chimney Rock, we have almost completed our merlot harvest and we are still waiting for our beloved cabernet to arrive at the crush pad.”

Sander Scheer, The Hess Collection, “Things are slowing down a bit for now here on the mountain for the moment with daytime highs floating around the upper 80s low 90s for the next 10 days or so. The quick sprinkle of rain we saw earlier in the month was just enough to knock the dust down so no issues related to rain to report thus far. Malbec, syrah and merot are continuing to show nice flavors but the cab still needs to hang. We will use the time this brief slowdown given us to plant cover crops and begin to winterize our steep vineyard blocks.”

Jon Ruel, Trefethen Vineyards, “With the return to cooler weather, the pace of harvest has slowed. Although harvest started only a little earlier than usual for our region this year, it looks like we may wrap it up much earlier than usual although it will still be into early October. This week, we are bringing in some cabernet from our hillside vineyard as well as merlot and malbec from our estate on the valley floor. Steve Matthiasson reports seeing vines ‘back on track’ after the heat spell and ‘lots of color in the tank but thick skins requiring a bit more heat and time to extract.’ Grower Steve Moulds was very happy with his cabernet franc harvest last week and expects most of his cabernet sauvignon to be picked by the end of this week.”

Tom Farella, Farella Vineyard, “The season continues with yet more surprises … now we are in the breezy days of autumn with cool temperatures and a late-October feel in the air. The vines are back on track to a normal harvest schedule after the whites are all off and some of the earlier reds. Cabernet is looming but really hasn’t moved much so we anticipate starting next week. The little bit of damage from the heat hasn’t worsened so a holding pattern is OK – for now.”

John Newmeyer, Heron Lake Vineyard, “Things are rapidly wrapping up in our little upland valley. All the pinot noir is in, as well as most of the chardonnay. Yields are close to, or slightly below, our 30-year average. We lost about 6 percent due to raisining.”