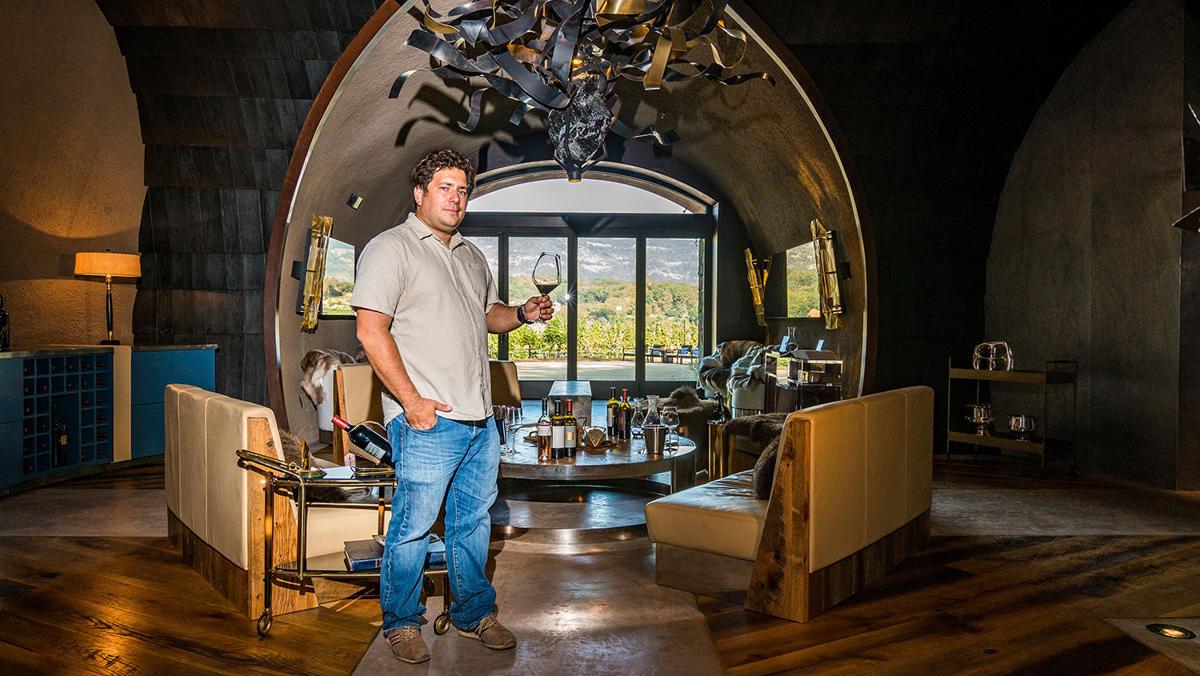 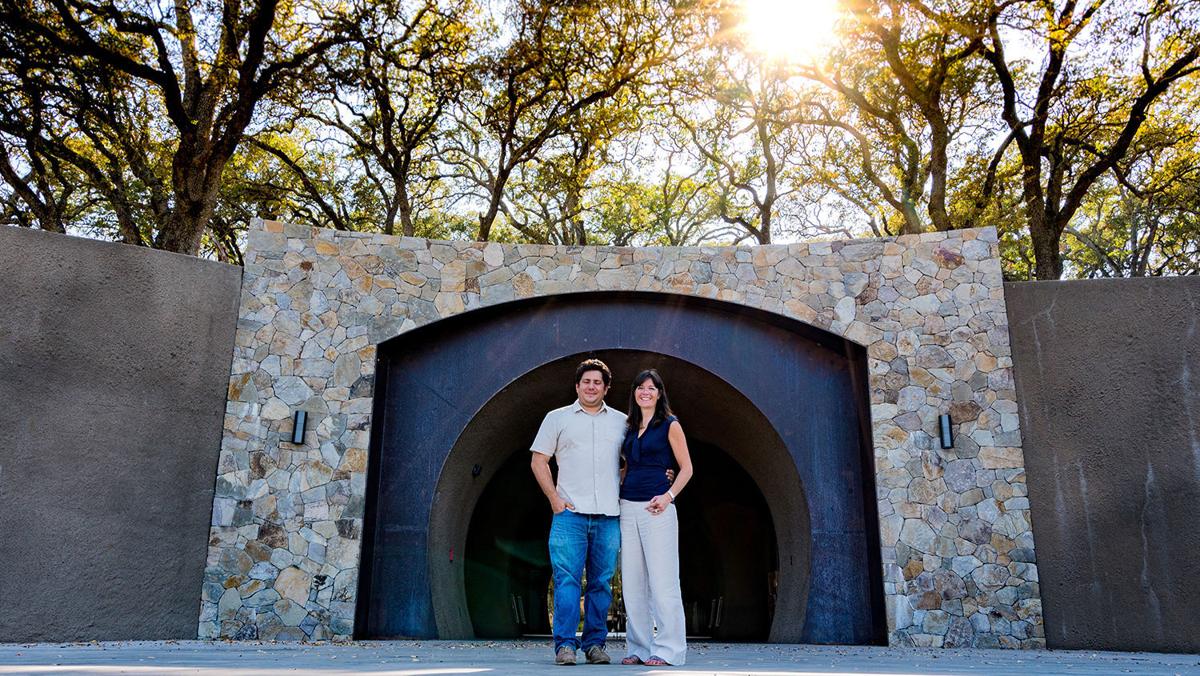 Winemaker Julien Fayard and his wife, Élan, stand at one of the Covert Estate winery cave portals. The entire winemaking facility is underground. 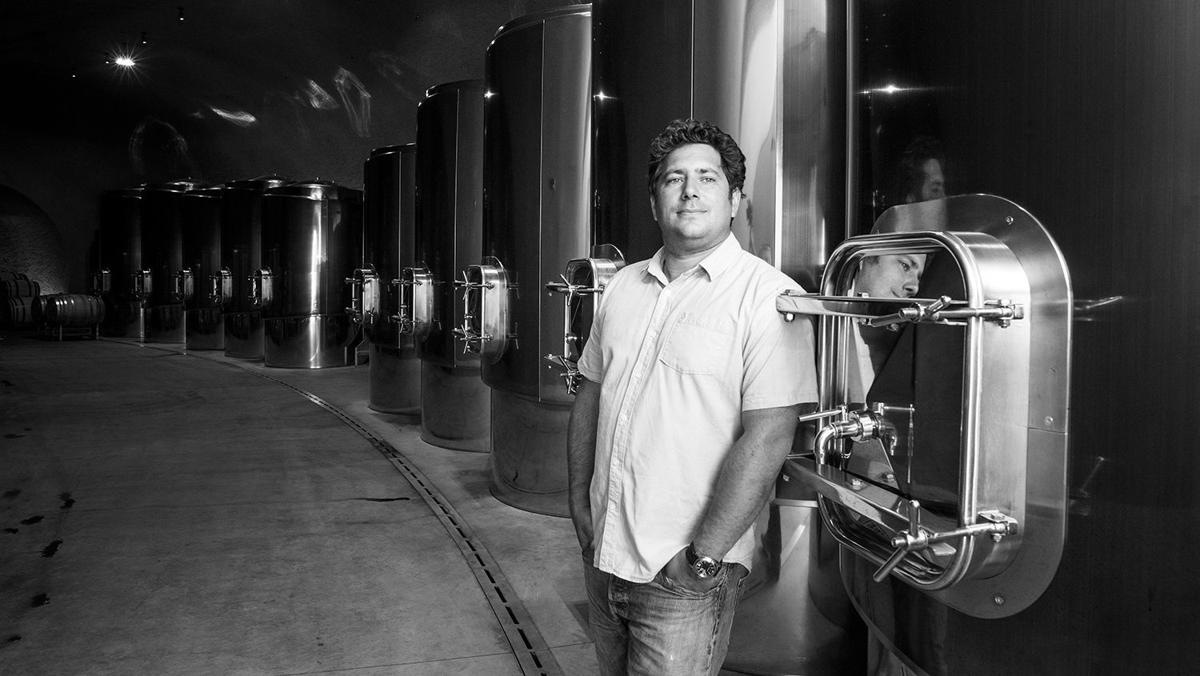 Winemaker Julien Fayard in the Covert Estate winery’s tank room showcases specially made tanks that only a few other facilities have, one of which is the famed Château d’Yquem in France.

Winemaker Julien Fayard believes the next chapter of Napa Valley winemaking will shift the focus from producing big, powerful cabernet sauvignons to instead crafting a variety of wines that highlight the complexity and finesse of the region.

To do that, he and his wife, Élan, along with their business partners, St. Louis residents Cal and Pam Nicholson (owners of Nicholson Jones Winery) and Dave and Laura Nestor, have recently completed construction of Covert Estate winery located in the Coombsville appellation.

“When my wife and I moved here from France in 2006 we discovered a new environment, new techniques, new weather, new climate,” Fayard said as we toured the 4.5-acre hillside vineyards on the 12-acre property in the hills east of downtown Napa.

The Covert Estate property boasts sweeping views of rolling hills that are dotted with ancient oak trees and expansive horse ranches, with only a few other vineyards in sight. To the south San Pablo Bay shimmers in the distance. Fayard explained that the bowl-like geology of the area, coupled with its nearness to the bay, provides lower daily temperatures when compared to other Napa Valley appellations.

“The grapes here ripen steadily and evenly, making for rich wines with complex nuances,” he said. “We often pick later than vineyards that might be just a few miles away.”

Fayard grew up in the town of Saint-Etienne and spent time working at his family’s winery and vineyard, cru classe Chateau Sainte-Marguerite, located in the village of La Londe-les-Maures near the French Riviera. For generations, the Fayard family has grown grapes and produced their own expression of the region’s signature wine, Provençal rosé.

By the age of 16, young Julien had blended his first wine. After obtaining a masters in agriculture and winemaking he worked at renowned French wineries such as Château Lafite Rothschild and Château Smith Haut Lafitte.

“I met Élan in the south of France while she was studying wine and the French language,” Fayard said. “After we married, we moved to California so that she could be nearer to her family and I could explore making wine outside of France.”

With more than a decade of experience making wine in Bordeaux, the duo moved to the Napa Valley in 2006, intent on eventually starting their own wine business in the United States. Elan, a Bay Area native, was thrilled to be home.

“We both love Napa Valley and the community,” she said. “We moved here with little more than the shirts on our backs. Everything we owned or moved from France fit in 4 large boxes. It was a leap of trust.”

Fayard teamed up with influential Philippe Melka, a fellow French winemaker behind some of Napa’s most sought-after Cabernets, including Dana Estates, Vineyard 29 and others.

“Julien is immensely talented,” Melka said. “Between his French roots of winemaking, his adventurous spirit and his great knowledge of the business, he has all the tools to be the next superstar of the industry. He understands the new generation of wines: stylistically pure and fun.”

“Working alongside winemaker Philippe Melka taught me how to work with the multiple climates and complexities of the Napa Valley,” Fayard said. “Within most of France (except in Burgundy, for example) winemakers work with fairly well-defined sites that are often large. Here in Napa, winemakers work with multiple sites that can be very, very tiny. So I consider winemaking here in Napa to be much like winemaking done in Burgundy. And so having a winery where we are able to tightly control every aspect of the winemaking, down to even single barrels, is important.”

To achieve this level of control, Covert Estate has built a state-of-the-art winery that is completely underground, as Juancarlos Fernandez, partner at Signum Architecture and lead architect on the project, explained.

“Because of the underground layout, the winery maintains a constant ambient temperature throughout the facility, including the tank room and the barrel storage,” Fernandez said. “This gives Julien full control of ideal temperatures for the grapes during crush all the way to the final bottling of the wine.”

As we toured the site, it became apparent why they adopted the name Covert — the winery is nearly completely hidden from view.

“The winery is fully integrated with the surrounding landscape and heritage oak trees that cover the property,” said Fernandez. “Visitors to the winery may notice the unique curved tunnels that originate from each of the outer portals, expanding and contracting in response to the winemaking process they accommodate. Also look for the framed views of the surrounding valley from inside of each of the three portals.”

Within one of these portals is the winery’s tasting room, which, in contrast to the simplicity of the winery, looks like a bachelor pad with leather and fur- covered chairs and industrial-looking modern furniture, much of which is made from reclaimed wood. An enormous volcanic rock topped with a thick glass slab serves as the central tasting table. Above, a twisting and tangled chandelier of metal hangs in the center of the room, providing stark contrast with the soft-rolling hills visible through large glass doors at the cave’s entrance beyond.

During our tasting, three wines stood out: the 2015 Azur, a Provencale-style rose; the 2013 Covert Cabernet Franc; and the 2012 Empreinte Cabernet Sauvignon. The 2015 Azur ($32 a bottle and only 850 cases made) speaks to Fayard’s deep family history of producing rose wines in Provence, France, for generations. This wine is stunning, starting with its salmon hue and aromatics of rose petal and wet sea stones.

In the mouth, this wine is breathtaking, with a mix of refreshing subtle citrus notes that blends flawlessly with flint and a whisper of dried mint. The Covert Cabernet Franc ($195 and only 100 cases made) highlights Fayard’s skill as a winemaker.

This wine showcases how Cab Franc can display a blend of blue fruit (plum and blueberry) highlighted with red-fruit elements (raspberry and dark cherry). The wine has a wonderful blend of both jammy and bright elements, and the texture is smooth and full on the palate.

Fayard makes a few wines under the Empreinte label, and the Empreinte 2012 Cabernet Sauvignon from the Martineze Vineyard on Pritchard Hill ($225) was a show-stopper. This is a cabernet in which anyone familiar with cult-cabs around the Napa Valley will find comfort — full of dark fruit such as blackberry and cassis but also spicy with nutmeg and cloves blended together with layers of toffee and sweet oak, creating a super-rich mouth feel and a finish that lasts for minutes.

It is interesting that during our tasting, we sipped on three different wine brands: Azur, Empreinte and Covert. Each of these had their own label and if you saw them on a shelf you’d never know they came from the same winery.

Additionally, the winery also produces the Nicholson Jones brand and Solace. Each brand represents an opportunity for visitors to explore different wine styles, but this unique business model also highlights a possible shift in the nature of wineries, from producing single-brand-focused wines to crafting collections of different brand concepts, providing flexibility within an ever-changing and highly competitive marketplace. Covert indeed.

“I think since the 1940s the Napa Valley has shown that it can make world-class wines of power and structure,” Fayard said. “I believe that the next phase of winemaking will show a different side to this place, making wines that highlight complexity and refinement.”

Tastings at the winery are by appointment only. For more information or to schedule a tour, visit www.covertestate.com.

The Fisher family has consistently made some of the region’s finest wines since the late 1970s, and yet somehow they’ve remained mostly out of the spotlight.

Allen Balik, The Wine Exchange: Winemaking, both art and science

In intricate and subtle ways science and art – two seemingly disparate values – meld into the creation of wine.

Barkeep SF has created “A Rosé By Any Other Name” Sangria, which features the new CK Mondavi and Family Spritzed Rosé Moscato, along with othe…

The 2020 Stags Leap Appellation Collection will include  17 bottles of Cabernet Sauvignon and online tastings.

Den Sake in Oakland is one of the exceptional U.S. producers of sake.

Winemaker Julien Fayard and his wife, Élan, stand at one of the Covert Estate winery cave portals. The entire winemaking facility is underground.

Winemaker Julien Fayard in the Covert Estate winery’s tank room showcases specially made tanks that only a few other facilities have, one of which is the famed Château d’Yquem in France.