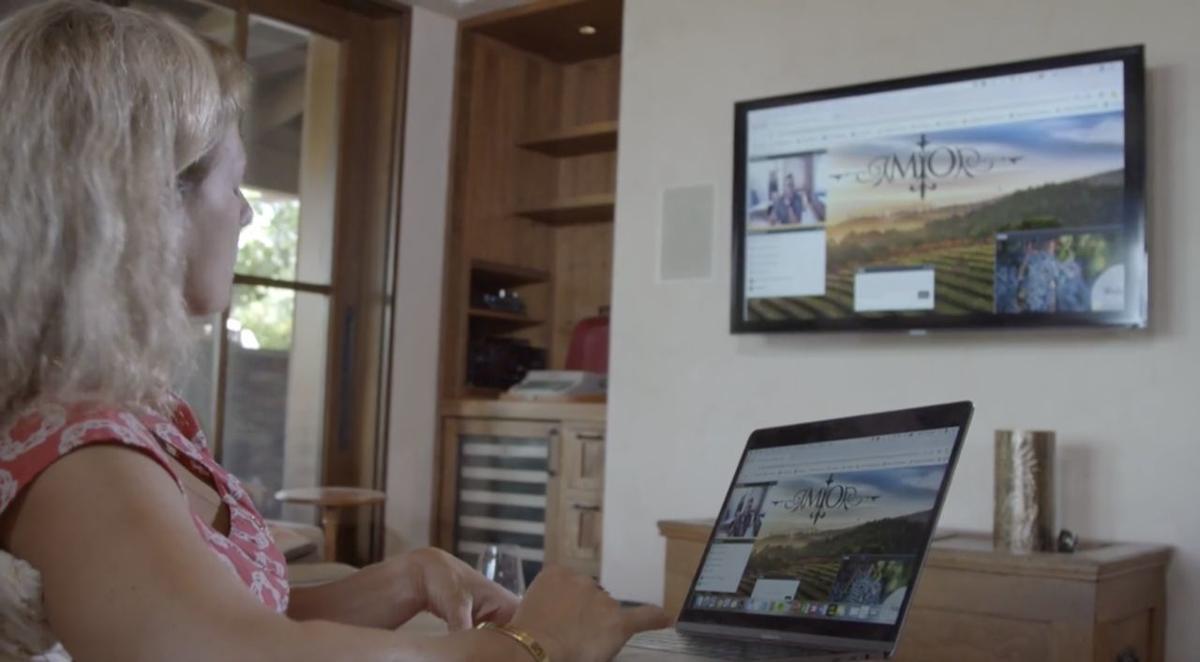 A customer of Jason Moore's looks on as she participates in a virtual wine tasting. Moore, who uses the virtual conferencing software On24 for his tastings, encourages participants to stream the tastings on their TV screens for an enhanced experience. 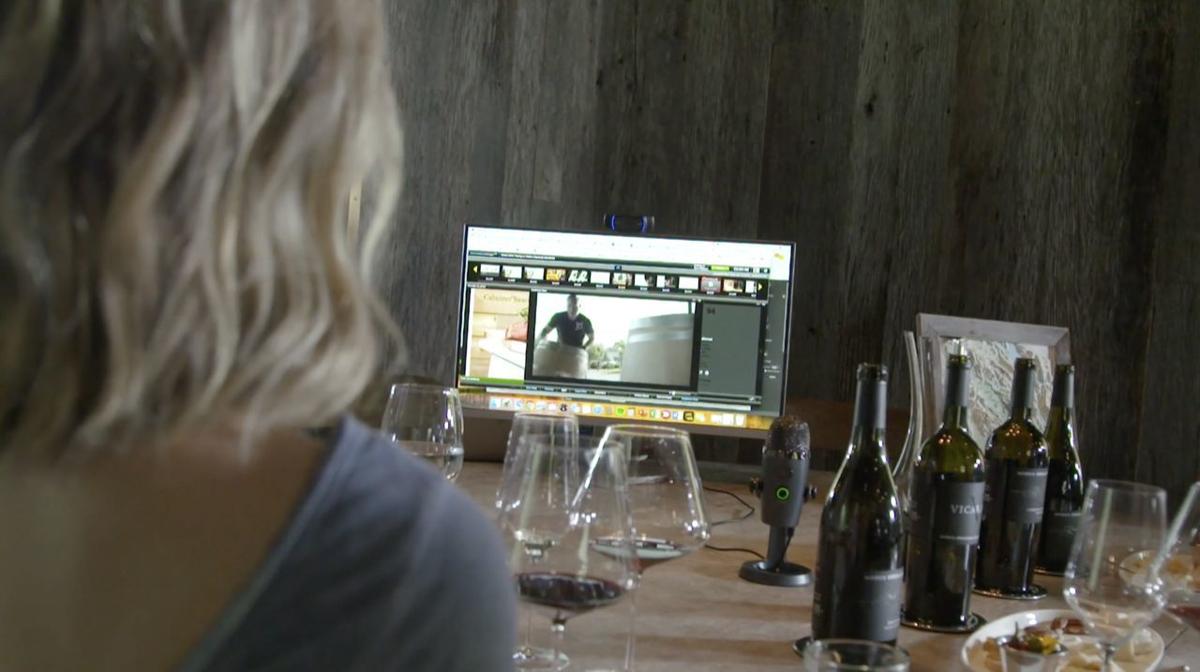 Moore conducts a virtual wine tasting, which he usually holds every other Sunday around noon. He launched the project for his boutique winery, Modus Operandi Cellars, about six months ago, after spending a year working on the experience. In the face of tasting room closures prompted by coronavirus, a handful of other Napa Valley wineries are following suit.

Faced with unprecedented disruption in demand following Gov. Gavin Newsom’s call for tasting rooms state-wide to close, many of Napa Valley’s wineries have been forced to rethink their business models. More are turning to virtual tastings in an attempt to fill the direct-to-consumer sales gap.

Tasting rooms are a crucial source of income for many of the valley’s wineries; even beyond the initial reach of tasting fees, tasting rooms encourage consumers to buy wine directly from wineries (giving way to sales termed direct-to-consumer). Marketers in the wine sphere often emphasize direct-to-consumer as especially crucial for small wineries producing fewer than 10,000 or so cases. Those wineries make up a significant portion of the valley’s industry – almost 80 percent of the 550 members of the Napa Valley Vintners, for example – and may have a more pronounced difficulty producing enough cases annually to engage distributors and, thus, retailers.

Even in the midst of an industry landscape very much in flux, wineries are doing their best to continue to engage with consumers directly. Clos du Val, which closed its Napa Valley tasting room earlier this month, launched its virtual tasting program on March 16, according to Director of Marketing Shannon Muracchioli.

The winery will offer tasting packages, comprising four wine bottles, to consumers, who will then be able to join virtual tastings held by tasting room staff on Zoom, Muracchioli said. Upon closing the tasting room, she added, Clos du Val offered the experiences to guests whose reservations had been canceled and notified their consumer base.

“Once the purchases are made, we’ll reach out (to consumers) and provide them with a link to schedule tastings online,” Muracchioli explained. It’s not unlike the process of scheduling an in-person tasting, she added. The winery has received a fair amount of interest and some questions about the process, Muracchioli said, though she thinks the concept will take some adjusting to before it garners significant traction.

“It’ll be a little bit of a bridge, because it’s not familiar to people,” she said. The winery has two virtual appointments scheduled for the end of this week. “We’ll have a few people doing it, and then word of mouth will help out and get others engaged.”

The concept of virtual tastings is a bridge that vintner Jason Moore has been trying to cross for the last six months. Moore launched a comprehensive virtual tasting experience for his boutique winery, Modus Operandi Cellars, hoping to supplement the limited number of in-person tastings he could schedule each day at the space he rents and shares with several other boutique producers in St. Helena.

“We were literally turning people away,” Moore said, of his in-person appointments. His thoughts turned to webinar technology, and then to how to implemented it best for the wine industry. He landed on branding the experience as a virtual tasting. “We essentially look to recreate our tasting room experience as close to the actual experience as possible.”

Moore has been offering his virtual packages since fall of last year. He charges $299 for the whole experience plus the four bottles of wine included in the shipment – the same, Moore said, as he’d charge for a vintner-hosted tasting for two. He holds tastings every other Sunday at around noon, but also offers pre-recorded options as well as private virtual tastings at a higher cost. His shipments to customers come tucked in a box with a velvet inlay and a full-length photo of a scene from Napa Valley; he provides participants with recommendations for proper wine glasses and cheese pairings.

“I spent about a year of my life working on this,” Moore said. His virtual tasting experience does not yet account for a significant part of the winery’s income – “too little,” Moore said – but in the midst of a significant, industry-wide recalibration, he said he knows that might change.

He’s not alone in hoping that it will. Direct-to-consumer sales make up 61 percent of revenue on average for “family winer(ies)”, according to Silicon Valley Bank’s 2019 state of the industry report.

“Almost all of that growth is dependent on a consumer first visiting the winery’s tasting room,” the report continues.

Last year, Napa and Sonoma counties together accounted for more than two-thirds of the value and 56 percent of the volume of wine shipped directly to consumers nationwide. Wineries like St. Supery Estate Vineyards & Winery are hoping consumers will continue to take interest in ordering wine directly to participate in tastings, either in the wake of canceled trips to wine country, or as they’re increasingly stuck at home without the option to go for sit-down meals (and glasses) at local restaurants. (Though Alcoholic Beverage Control Director Jacob Applesmith verbally confirmed Wednesday that restaurants in the state would be permitted to sell bottles of wine with to-go orders of food, a suspension of California’s usual regulations).

St. Supery shut down its tasting room immediately following Newsom’s directive to do so, according to CEO Emma Swain. They repositioned their tasting room staff internally, Swain said, and then decided they’d expand upon an existing program of pseudo-virtual tastings they’d done in the past that were live-broadcast over social media.

“We’ll taste one night a week on Thursday nights, and people can join in using Zoom or Facebook Live,” Swain said, referring to the social media platform’s broadcast function. The winery planned to use a wine it had recently sent out to wine club members for its first tasting, held March 19, in the hopes that many of its most dependable consumers would already have the wine on hand. Tastings will be hosted by winemaker Michael Schulz and his staff, Swain added.

St. Supery will also send the wine, a Dollarhide Estate Vineyard Sauvignon Blanc, to consumers who order the winery’s six-bottle virtual tasting “wine kit,” Swain said. The winery established the wine kits for the virtual tastings earlier in March, Swain said, launching off an existing rotation of wine kits that are available for purchase normally.

Moore knows that this era of fluidity and volatility could be a kind of change agent for the wine industry. He hopes that other wineries moving from in person to virtual tastings will find success.

“It could be a huge thing for the industry, and everybody out here is limited in one way or another (by the number of people they can see in person),” Moore said.

He encouraged wineries considering the option to repetitively test their experiences before promoting them to consumers.

“Always keep in mind – this is the case for me, at least – this is about entertainment, but it’s also about converting (attendees) to customers,” he said. “You’re figuring out how to convert the strangers into the room into people who might join your mailing list, purchase your wines or join your wine club.”

Following the governor's directive, Napa County wineries are closing their tasting room for an unknown amount of time.

Gov. Gavin Newsom on Sunday called for all bars, wineries, nightclubs and brewpubs to close in the nation's most populous state and urged seniors and people with chronic health conditions to isolate themselves at home in a bid to contain the spread of the coronavirus.

On Wednesday, Solano became the ninth Bay Area county to issue health orders in response to the novel coronavirus pandemic.

Many Napa child care centers have shut down due to coronavirus-related disruptions.

With coronavirus cases and deaths rising in California, state officials are racing to prepare hospitals for more patients while also tapping o…

Napa County hotel revenue has already fallen 23 percent due to the coronavirus pandemic, a trend that is expected to continue, said tourism agency Visit Napa Valley.

Coronavirus has upended the restaurant and bar industry, but consumers can buy wine bottles to-go.

The Napa Valley Vintners say they will cancel the annual Auction Napa Valley fundraiser in June because of the coronavirus.

Here are the St. Helena businesses that are still open during the shelter-in-place order.

St. Helenans socialize at a distance under shelter-at-home order

St. Helenans are finding creative ways to stay active and social while sheltering at home.

A customer of Jason Moore's looks on as she participates in a virtual wine tasting. Moore, who uses the virtual conferencing software On24 for his tastings, encourages participants to stream the tastings on their TV screens for an enhanced experience.

Moore conducts a virtual wine tasting, which he usually holds every other Sunday around noon. He launched the project for his boutique winery, Modus Operandi Cellars, about six months ago, after spending a year working on the experience. In the face of tasting room closures prompted by coronavirus, a handful of other Napa Valley wineries are following suit.