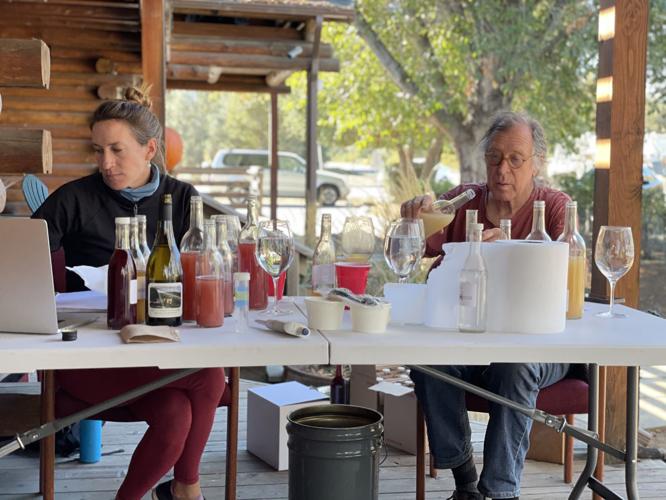 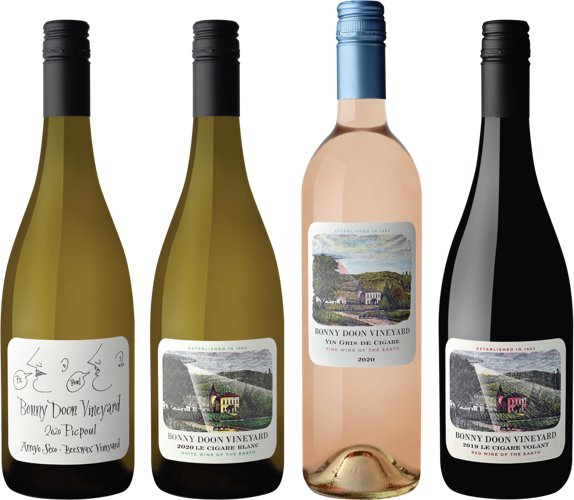 If you parsed the world’s wine grapes into three categories based on widely acknowledged quality, a tiny percentage would be called “great,” a few would be very good, and the rest, in the many thousands, would be ordinary just or drinkable.

Working for merchant Dennis Overstreet, Randall was exposed to common-grape greatness. And it was there that he drew connections to paradigmic enological history that only wine lovers of many decades experience ever see. Some never do.

During his retailing days, he had access to classic examples of current wines as well as earlier vintages. That provided him a unique perspective.

Wine Merchant owner Dennis Overstreet had one of the most successful retail wine establishments in the country partially because he was so close to the wealthy Hollywood movie community.

I heard stories of his dealings with movie personalities (like Alfred Hitchcock), some of whom got into wine late in life and put in wine cellars so large they couldn't consume all the wines in two lifetimes.

Overstreet reportedly was able to reacquire some of those wines many years later.  — Dan Berger

Respectively, they are Pinot Noir, Chardonnay, Sauvignon Blanc, Nebbiolo, Syrah, and Riesling. And there the list grows thin. These and a few other grapes make great wines and the rest of the world’s thousands of grapes make ordinary wines, most people say.

But not Randall Grahm. I’ve known Randall for most of his four decades in wine and have never heard him disparage a grape.

Indeed, when I began writing this homage to the man-genius of Bonny Doon Vineyard, I knew I couldn’t use common grape variety examples because Randall believes, as do I, that greatness can also come from Grenache Blanc, Grüner Veltliner, Picpoul, Verdejo, Verdicchio, Lagrein, and even some grape varieties that have no names — yet! (See below.)

Grahm sees grape varieties as blank canvases bursting with potential, waiting for inspiration to sculpt something, much the way Rodin viewed a chunk of raw marble.

Even in the theoretically humblest of grapes, Grahm often sees a manifest destiny that would likely escape the view of almost all wine lovers, with few exceptions.

It began for Grahm four-plus decades ago when, as a college student working at The Wine Merchant in Beverly Hills, he saw the connection between grape variety and terroir.

One conclusion he drew: Each grape variety had a special bond with the soils they came from. He saw how the paradigms — the ultimate expressions of each — all seemed to emanate from Europe, providing templates from which we can understand myriad variations.

I asked him about his euro-vision views in which he tries to make Rhône-style wines that emulate the personas of the districts that established the paradigms.

He said doing red, white, and rosé versions of the Rhône was difficult because soils and weather conditions here are so different.

I view Grahm as one of the world’s most astounding wine people, a man often misunderstood in his own country. That has left him and his Bonny Doon wines in an odd purgatory.

“I guess you could say I’m sort of like Jerry Lewis in one regard,” he said in an interview last week. “I’m better appreciated in France (than in the United States).”

He said his wines are best understood in the San Francisco Bay area, not as much in most other major U.S. cities. “New York gets it,” he said, but elsewhere his message isn’t obvious.

It took me a while to understand what Bonny Doon has been all about since its 1983 founding. Or how visionary Randall has always been, much to the confusion of even some of his most ardent supporters!

I love chatting with him because he is remarkably insightful, notably about wine philosophy, a topic only a UC Santa Cruz philosophy major could understand. Indeed, only UC Santa Cruz would have the courage to create a degree major called “Enological Philosophy.”

I asked him about his quest to achieve greatness by paying homage to the styles of wine that represent not only various grape varieties but also reflecting the European terroirs.

“Aspirational,” he said. “Do your best and hang on for dear life.” Classic Randall. I broached the subject of how difficult it was to make euro-style wines in a Mediterranean-esque climate. “Of course, there’s only so much manipulation you can do,” he said.

“If there’s a Bonny Doon style,” he said, “it is to be as authentic (to the paradigm) as possible. There’s really no such thing as a truly natural wine,” so any of his efforts at affecting a wine’s style are aimed at authenticity.

As such he eschews aging wines new oak barrels, which he readily admits is “to my own peril,” since it’s at odds with those who give high scores to oaky wines, which spurs sales.

One of the most striking of his recent wines that illustrate this is his 2020 Picpoul, a white wine from a grape also known as Folle Blanch. It is a high-acid grape appreciated most in Cognac. His wine is blessed with subtle aromas of fennel and star fruit, is dry and perfect to pair with oysters. And has only 12.5% alcohol. (“That’s high; it usually comes in at 11.5%.”)

Picpoul isn’t widely known, and little of it is grown in California. “It’s more of an east coast thing,” he said, adding that it’s popular in Boston, New York, Washington.

Euro-styled wines aren’t the easiest to sell here, which became clear in the last two years as Bonny Doon’s sales slid to a point where wholesalers couldn’t always keep up with his diversity of labels.

Bonny Doon established several ground-breaking tactics over the years, some of which benefited the industry at large. Such as the use of screwcaps for the entire line of wines and creative labeling featuring hand-drawn cartoons as well as Randall’s often arcane, erudite sense of humor.

The wildly different labels, some of which changed annually, may have hurt repeat sales.

In early 2020, Grahm closed his tasting facility and sold Bonny Doon to WarRoom Ventures LLC. He remains the winemaker and the brains behind the project. Months ago, the winery was re-strategized, pared down to just four wines, and prices, which had been in the $20 to $35 price range, were dropped to $15 across the board.

It’s a risky strategy, but the wines are arguably as good as ever and maybe better!

Last week’s column here that said retail prices for fine wine almost never come down wasn’t wholly accurate since the Bonny Doon wines are excellent and now sell for well under market. And are all superb.

Besides the examples above are a brilliant white Rhône blend, 2020 Le Cigare Blanc, a 60% Grenache Blanc for aromatics and a gorgeous tactile mouth-feel, and 32% Vermentino for floral notes, minerality, and a faint almond-y note.

Grahm also owns an adventurous vineyard project in San Juan Bautista, where he has planted grape material on a 400-acre ranch he calls Popelouchum. There, in a surreal experimental vineyard, he’s hoping to develop 10,000 new grape varieties. Yes, you read that correctly. Ten thousand.

The grapes, when they arrive, won’t be named with traditional varietal designations — classic Randall.

2020 Le Cigare Volant, Central Coast ($15) — A remarkable drink-soon expression of superb grapes and cooler climates in which Syrah and Cinsault are co-fermented to broaden the mid-palate, and blended with 56% pomegranate-fragrant Grenache to deliver near-southern Rhône drinkability. Notes of anise, plum, and cherries abound. It may not be as ageworthy as some past vintages, but easier to love now.

Dan Berger lives in Sonoma County, , where he publishes "Vintage Experiences," a subscription-only wine newsletter. Write to him at winenut@gmail.com. He is also co-host of California Wine Country with Steve Jaxon on KSRO Radio, 1350 AM.

Dan Berger On Wine: Another try at low-cal wines, with promising results

If you drink a glass of wine per day or more and fret about your weight, how’d you like to avoid ingesting tens of thousands of calories a year and not give up your wine?

Dan Berger makes the case for Riesling as" probably was the world’s greatest grape" that makes dramatic and sublime wines – with both elements occasionally seen in the same bottle.

One of the wine industry’s Achilles heels, and a topic no one ever talks about, is that domestic wines’ retail prices always seem to go up and almost never come down.

Dan Berger On Wine: Regional character — Why it matters for consumers

U.S. appellations, as they pertain to fine wines, can mean a lot or nothing. Which clearly means that some appellations are consumer-friendly and helpful, but others offer nothing except confusion. 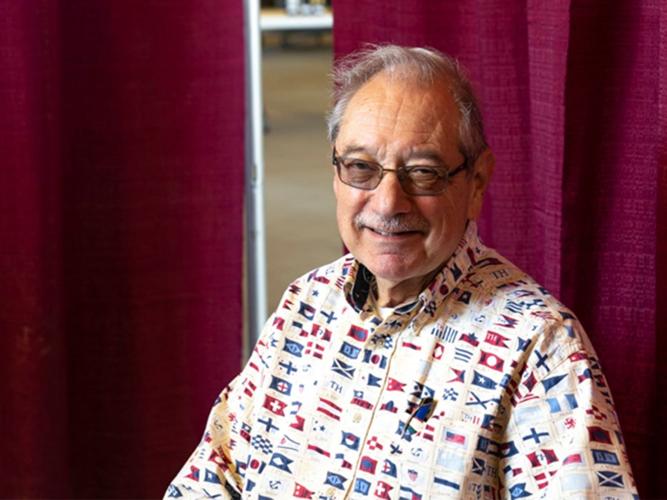