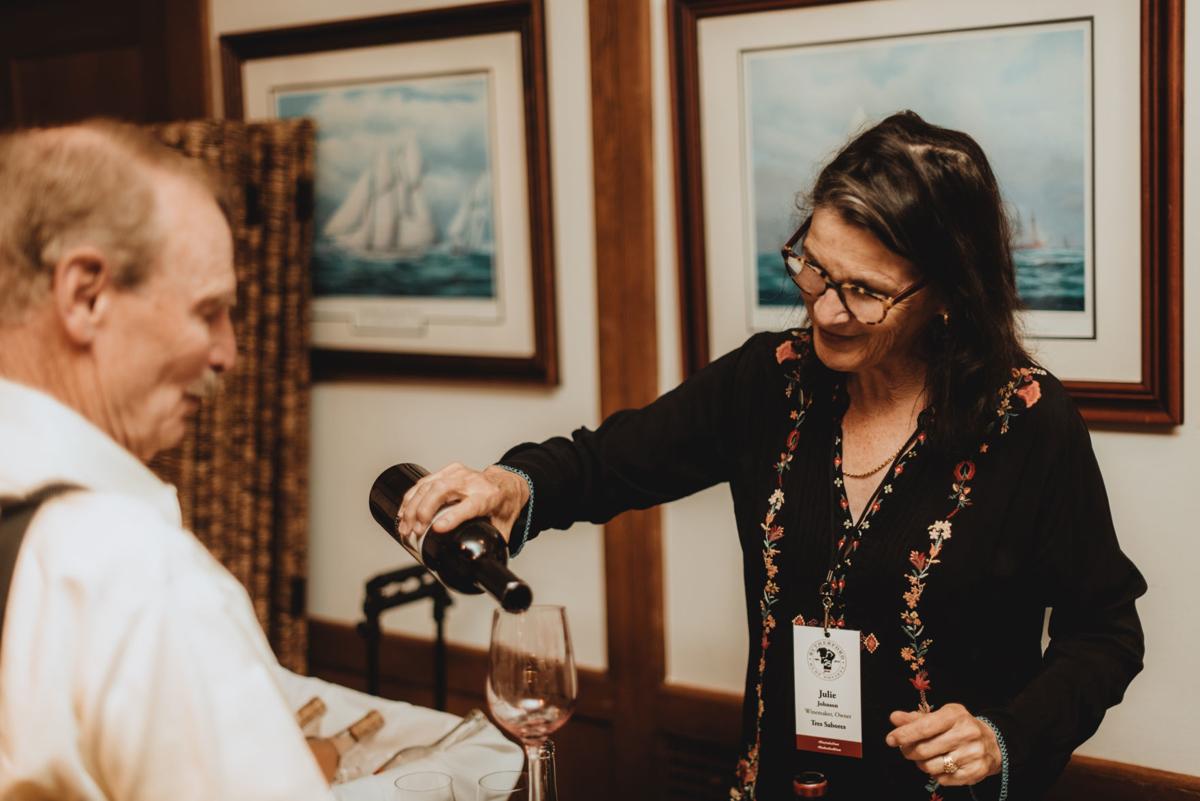 Julie Johnson of Tres Sabores pours for a member of the trade at A Day in the Dust. 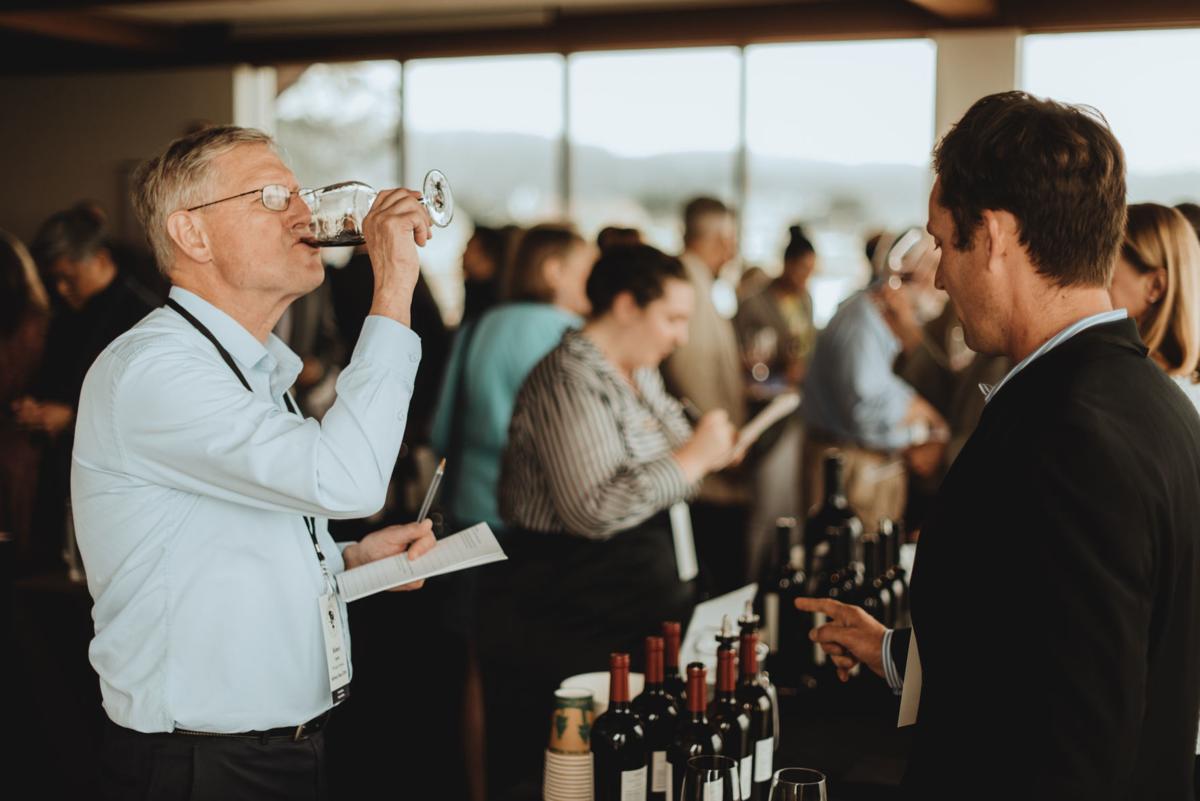 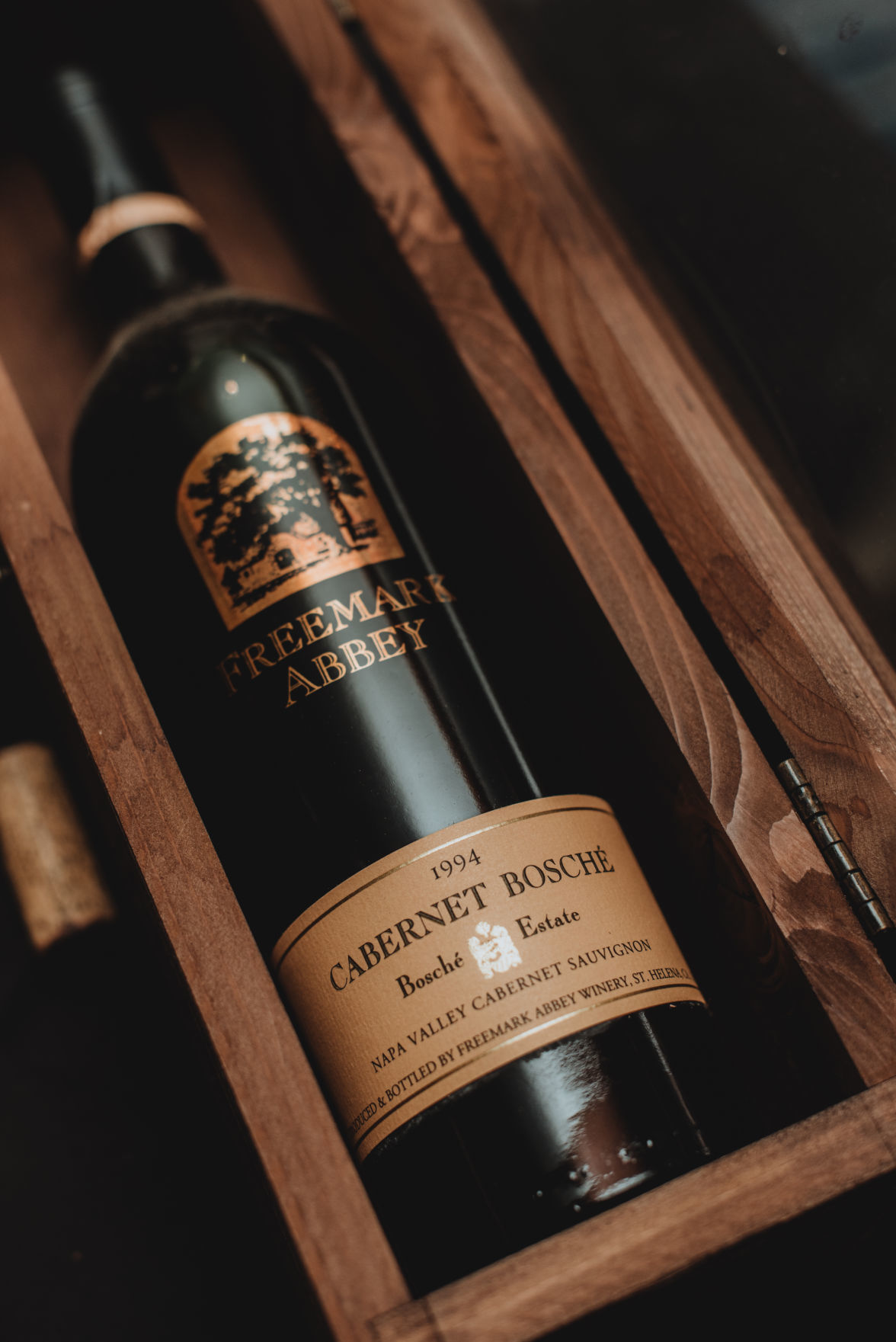 "Rutherford 'dust,' bottled and transported down to San Francisco for A Day in the Dust".

On a cool Thursday afternoon, the St. Francis Yacht Club hosted the Rutherford Dust Society (RDS) for the group’s annual “A Day in the Dust” July trade tasting. The 92-year-old sailing club opened its doors to the much younger association of Napa Valley wineries, which was commemorating its 25th anniversary.

As in past years, dozens of Bay Area retailers and restaurateurs attended the event. Consumers and winery club members followed the trade later that day, a first for the Rutherford Dust Society. In another break from tradition, instead of Rutherford enthusiasts trekking up to Napa Valley for the popular event, the RDS brought the Grand Tasting to San Francisco.

They also brought some bottled sunshine in the form of Rutherford Cabernet, Zinfandel, and Sauvignon Blanc. Consistent with San Francisco summer weather, the local temperature was about 40 degrees colder that day than in wine country. St. Francis Yacht Club sits above a rocky seawall at the northern edge of the Marina District, and the normally spectacular view of Alcatraz, Angel Island, and the Golden Gate Bridge was partly hidden by dense July fog.

Long moans from the bridge’s foghorn every few minutes added to the gloomy ambiance. But inside the nautically themed clubhouse it was a coming-out party for the much-anticipated 2016 vintage, as well as an opportunity for wineries to dig through their cellars.

“With this being the 25th anniversary of the Rutherford Dust Society, the retrospective tasting of Rutherford AVA wines was fitting,” said Kelly Carter of Alpha Omega Winery, an RDS member since 2006. Carter had the distinction of pouring the event’s most surprising wine, a 2012 Rutherford Sauvignon Blanc.

“Not only was opening up A Day in the Dust to consumers a brilliant idea, but so was taking the show on the road,” the communications director said. “These wine lovers would not have been exposed to the wines on display had [the tasting] been held in its previous fashion.”

Julie Johnson, an industry veteran from her days at Frog’s Leap and the proprietor-winemaker of Tres Sabores, was pleased with the balance of trade, media, and her own club members who attended.

“This was, I think, just a test to see what was possible,” she said of the switch from Rutherford to San Francisco for the grand tasting. “There’s nothing like bringing the tasting to people and seeing who comes. I had wine club members here, and they may not have made the trip if it hadn’t been right in San Francisco. So that was pretty cool.”

Having an identity so closely intertwined with Napa Valley’s, it might come as a surprise that Rutherford was granted American Viticultural Area status only in 1993, or that the RDS is just turning 25. But the entire appellation system isn’t much older. Viticulture and winemaking in Rutherford extend a lot further back into California’s past.

In fact, by the time a group of San Francisco yachtsmen founded the St. Francis Yacht Club in 1927, Georges de Latour had reached his own quarter-century milestone at his successful Rutherford winery, Beaulieu Vineyard.

De Latour got his start in Napa Valley in 1900, when, according to wine historian Charles Sullivan in Napa Wine, A History, the French-born entrepreneur sold a separate business in Healdsburg and purchased four acres in Rutherford. The move, Sullivan writes, “put him in position to become the baron of Napa Valley premium winegrowing 30 years later.”

In 2019, Beaulieu Vineyard is a pre-eminent member of the Society. With her back to the fog-shrouded bay, a Beaulieu brand manager, Gina-Rose Oliva, found herself pouring the iconic Georges de Latour Private Reserve Cabernet next to John and Stacy Reinert, proprietors of the six-year-old (and cleverly named) Brilliant Mistake Wines. The arrangement was symbolic of Rutherford’s place in the California wine industry: a Napa Valley district with a foot each in the past and quickly evolving present.

The current RDS board president, Steve Tonella, was on hand to pour his S.R. Tonella Cellars Cabernet and Sauvignon Blanc for the attendees. He has been a Society member since 2014.

Taking breaks to work his way through the crowded clubhouse and greet attendees, Tonella observed that, while the event showcased the uniqueness of Rutherford’s terroir in the present Napa Valley context, “We have wineries that have been in continuous operation since 1900 and one winery, Inglenook, where their first harvest was in 1882. So there’s a tremendous history of the Rutherford viticultural region.”

Few wineries in California, let alone Napa Valley, can boast Ingelnook’s or Beaulieu Vineyard’s longevity. But event participants like Heitz Cellar, Freemark Abbey, and Grgich Hills have done their fair share to help set the quality bar very high for Rutherford Cabernet Sauvignon. All three properties own track records that date to the 1960s and ‘70s, a highly formative period for the California industry.

Longtime Freemark Abbey winemaker Ted Edwards explained that his late boss, Laurie Wood, was on the Rutherford Dust Society’s original board of directors, along with Andy Beckstoffer, Davey Piña of Piña Napa Valley, and Frog’s Leap co-founder John Williams. “I’m probably leaving someone out,” Edwards confessed. “Laurie, who was one of Freemark’s general partners, got me on the board at one point in time.”

A tribute to Rutherford’s winemaking history

About 12 wineries made up the first RDS membership when it was founded in 1994, on the heels of the Rutherford AVA recognition. On the homepage of the Society’s website, it states that the original members launched it “in tribute to the legacy of our grape-growing and winemaking forebears.”

Today, that dozen wineries has increased to more than 40 members, joined by two dozen growers. Many of these members grow and make wine in relatively small quantities. Even as she expressed concern for the future of such artisan producers in Napa Valley, Tres Sabores’ Johnson was upbeat about the turnout for A Day in the Dust.

“How do we how do we get our voices out there?” she asked. “And who can be our partners to help build that? I mean we are — small wineries, in particular — we’re in danger of not being able to welcome people and have people get to know us and sustain our businesses. So I think that the Rutherford Society is an avenue for one of those affiliations. It’s a tool that a small winery can utilize to continue to be out there.”

Once trade and media attendees filtered out of the yacht club in the late afternoon, the Rutherford vintners took a short break before consumer started to show up. Stretched out into the evening, the turnout was decent, but hardly overwhelming. RDS Executive Director Sara Soergel reiterated that “this was the first year that the Grand Tasting for consumers was offered. We had about 220 trade attend, and there were 100 consumers, which we hope to grow.”

One such consumer was Laurie Hanna, who took a tasting break for some decidedly fresh air on the club’s seaside patio. Coming from a grape-growing family in Alexander Valley, it wasn’t her first wine tasting. “This was a great event,” she said, expressing some surprise. “Why it wasn’t packed to the gills is beyond me. But I’m sure it will be next year.”

A companion of Hanna’s, Kristin Hagan Sprincin, runs global partnerships for a software company in San Francisco but spends a fair amount of time at her and her husband’s second home in Pope Valley. She appeared familiar with Rutherford.

“This is really one of the top Napa Valley wine events I’ve been to,” she said. “I looked around thinking I’m not going to know a lot of these wineries, but then I knew, I would say, all but maybe one or two.”

“I think that there’s something about the wines in Rutherford that’s very special,” Sprincin added. “This event is also really special because you get to meet a lot of the proprietors of the wineries that you drive past when you’re going up Valley. You don’t necessarily stop at all of them, but here you get to see them in one place.”

Stephan Howsepian was another consumer attendee who offered some thoughts on the Grand Tasting. Like Laurie Hanna, his family is attached to the wine business. And, like Sprincin, he works in software.

“I thought it was a great event,” said Howsepian. “It was really cool to see so many different winemakers from a single AVA showcasing different wines. And it was also nice to see just how many different profiles of wine can come from the same area.”

Taking a moment to consult his tasting booklet, he was impressed, in particular, by the range of wineries at the event, “from those that have been around for generations to some that are just getting off their feet — that are just starting to kind of showcase their wines.”

A socked-in afternoon and evening aside, the St. Francis Yacht Club proved to be an ideal venue for both the trade, who needed some elbow room to take notes, and for consumers and winery club members to converse with wine professionals in a relaxed atmosphere.

It also afforded any yacht enthusiasts among attendees the chance to observe an exquisite — and enormous — collection of scale model boats arranged throughout the event space. In a follow-up email, the club’s spokesman, Commodore Paul Heineken, explained that all of the models are on loan or have been donated over the years, some by the owners of the original yachts.

“The models situated around the club tell our club’s story through a museum-quality collection,” Heineken wrote. “They represent many of the significant yachts that have sailed and raced under our burgee over the years, across oceans and around the world.”

The wines of Rutherford are, in a way, like the St. Francis model yacht collection. They might be thought of “museum-quality” themselves, owing to the Rutherford District’s and Napa Valley’s long, parallel histories. They certainly have an international reputation because of that history. But the Rutherford Dust Society now has its eyes on the future.

Steve Tonella shared a final thought on this.

“You know, if you go back to France and you look at regions of Champagne or different areas within Bordeaux, they’ve had hundreds and hundreds of years to promote their wines, to showcase and make them distinct,” said the RDS board president. “And so we’re very young. We’re 25 years old, right? So we just have a more of an opportunity to showcase our wines and make the history come alive, and then take that forward.”

After 40 years of winemaking in Napa Valley, Ted Edwards becomes "winemaker emeritus" in 2020.

Julie Johnson of Tres Sabores pours for a member of the trade at A Day in the Dust.

"Rutherford 'dust,' bottled and transported down to San Francisco for A Day in the Dust".