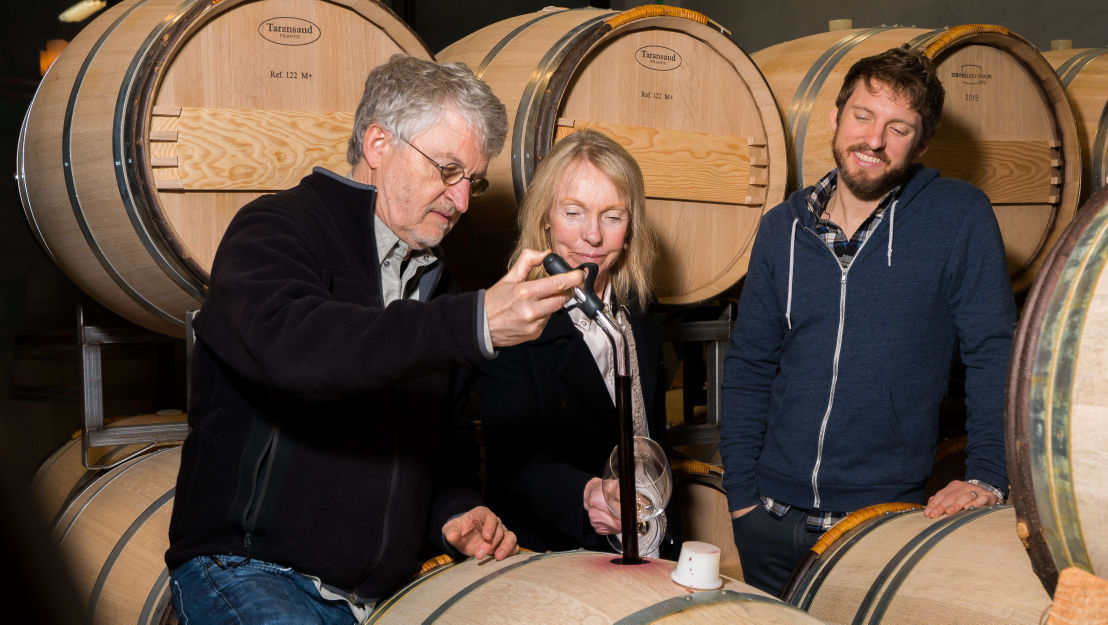 Scott Young (right) and his mother Jacky share the winemaking responsibilities at Young Inglewood Winery. Scott’s father, Jim (left), normally focuses on the operational side of the business but in the picture is taking a barrel sample. All three family members are involved in the day-to-day operation of the winery, which often includes tasting wine with guests at their tasting room. The Youngs’ daughter, Mary (not pictured), retains an active advisory role in the wine business but is presently finishing up her master’s degree in music. 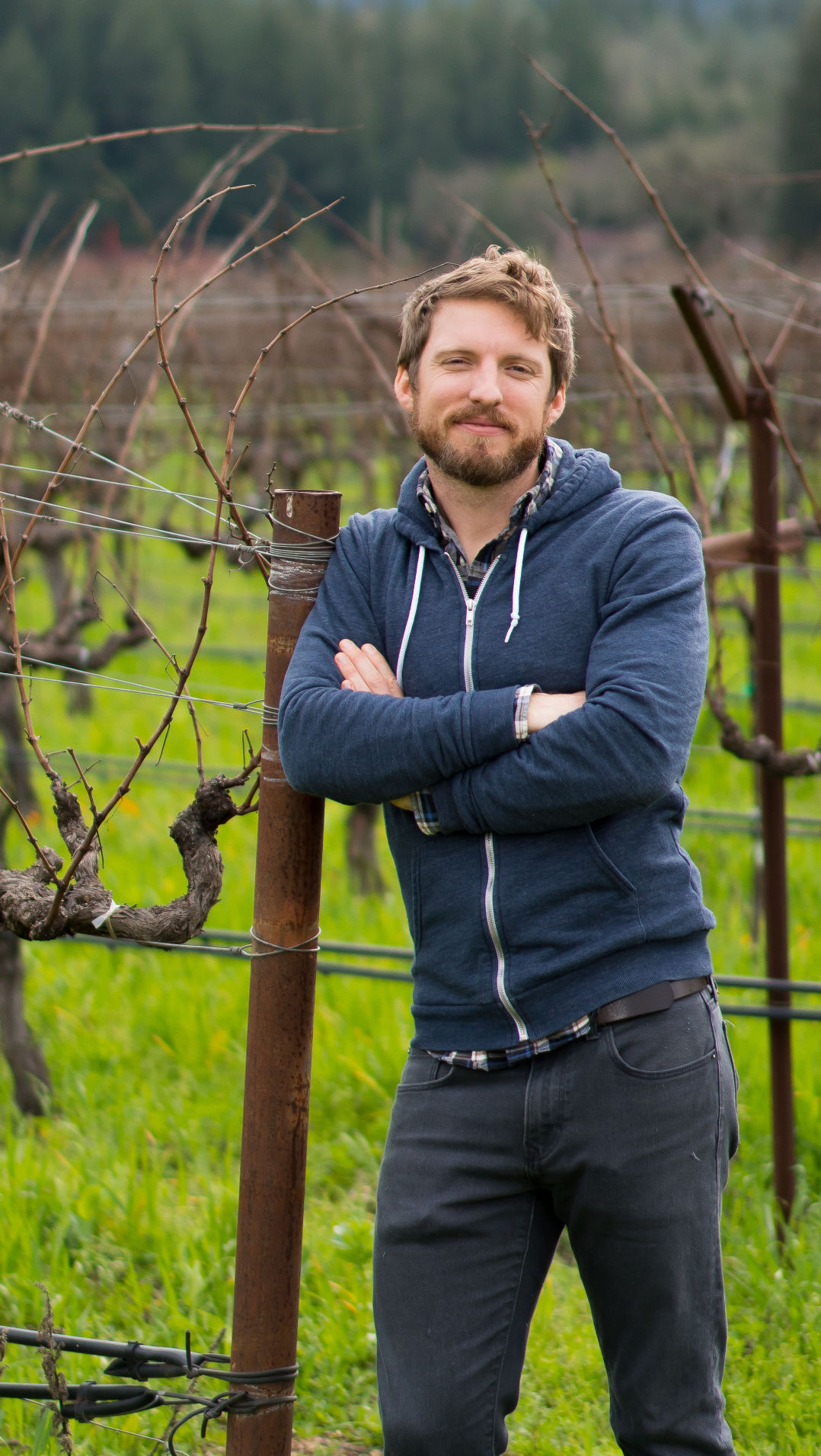 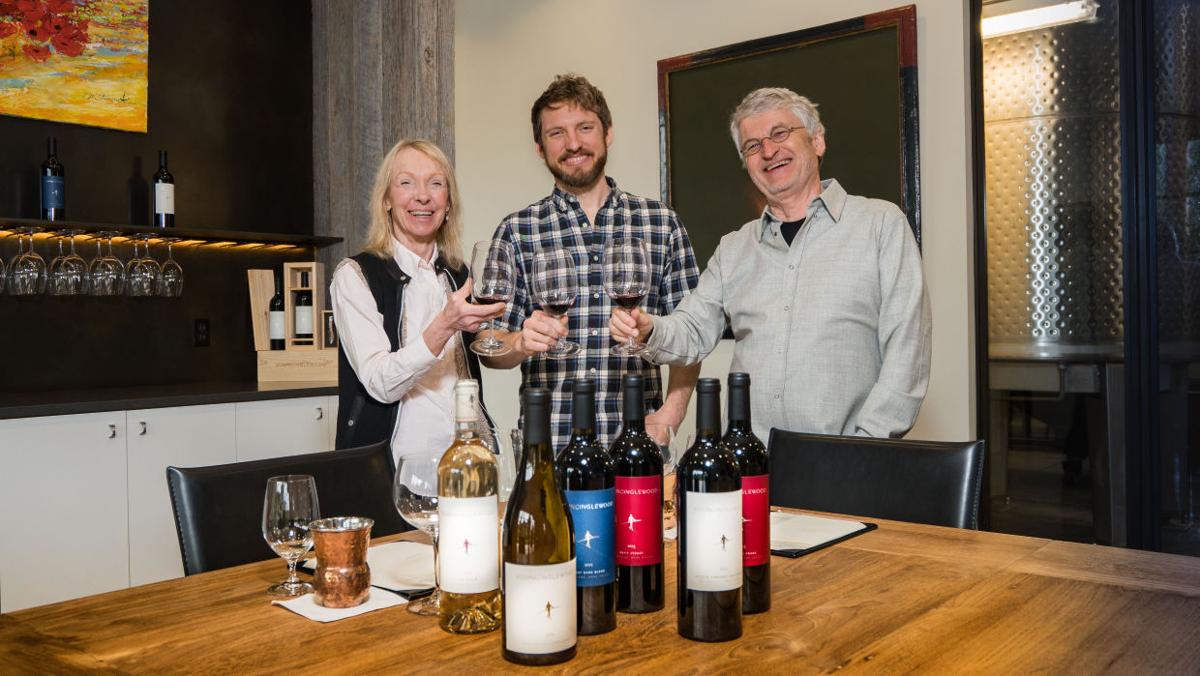 Jim (right) and Jacky Young and their son, Scott (center), of Young Inglewood Winery greet customers in their tasting room.

The owners of St. Helena’s Young Inglewood Winery are finding that when an exceptional vineyard site comes together with a close family dedicated to making exceptional wine, something magical can happen.

“Our son Scott and I share in all the winemaking decisions,” said Jacky Young, co-proprietor of Young Inglewood, “while my husband, Jim, and our daughter, Mary, are more involved on the operational side of things. Living and working together onsite has brought with it an immense level of satisfaction.”

Jacky still retains a hint of her English accent. She grew up in Britain and then moved to Huntsville, Alabama, where she and Jim eventually co-founded the Sirsi Corp. in 1979, which created the first automated integrated library system. They sold Sirsi in 2001.

After selling the company the family moved to London, where Jacky’s life-long interest and study of winemaking gathered steam. At the same time, Jim’s appreciation for excellent wines deepened, and Scott began working at wine retail shops and during harvests in France. Eventually, the family decided to pursue their collective dream and struck out to make their own wine.

“In 2007, after an exhaustive search in the Napa Valley, we found this small, historic vineyard and we were beside ourselves,” said Jim. “The site had an ideal mixture of soils, aspect and weather for growing the Bordeaux varietals we love. It also had room to build our home and a winery.”

The Young Inglewood 16-acre estate is located just south of St. Helena on Inglewood Avenue. According to the Youngs, the site has been almost continuously under vine since its first planting in the late 1870s, except during Prohibition, when most of the property was used for fruit and nut trees.

They reported that the site was originally part of Rancho Carne Humana, a Mexican land grant that stretched from what is today Rutherford north to Calistoga. In 1841, Rancho Carne Humana was deeded to an English physician named Edmund Bale, in part due to the influence of Gen. Mariano Guadalupe Vallejo, who was uncle to Bale’s wife, Maria Ingnacia Soberanes. After Bale died, his widow sold off the land in parcels, one of which eventually ended up with vintner Bill Jaeger. Doug Hill, Jaeger’s vineyard manager at the time, replanted the vineyard in 1997, and 10 years later the Youngs purchased the site.

“When we first purchased the land, Doug was managing the vineyard,” said Scott. “He had such a deep understanding and respect for the land that we’ve been working with him ever since. We all believe that to farm grapes effectively each vine needs to be treated as an individual. We use a mixture of organic, sustainable and biodynamic practices to promote balance. In 2015, we obtained Napa Green certification.”

“The vineyard is special in that it has deep, gravelly soils,” said Hill during a phone conversation. “I’ve been farming the vineyard since 1980, and the fruit that comes off the site is great. To my recollection, a 1981 vintage of merlot produced from the fruit off that site — from the Jaeger Inglewood winery at the time — actually won an international competition for best merlot, and that competition included other world-renowned wines such as Petrus, which is considered by many the best merlot in the world. Like I said, it’s a special place.”

Hill was referring to an international wine competition organized by pioneering wine journalist Robert Lawrence Balzer, who also organized the New York Wine Tastings. Balzer’s efforts are widely considered the precursor to the matching of French and California wines at the Judgment of Paris tasting competition, which catapulted Napa Valley onto the world stage for its ability to produce world-class wines.

No record of the particular contest to which Hill referred was found, but his memory of winning a merlot competition against Petrus is high praise indeed. The Bordeaux wine-growing region of France is divided by the Gironde Estuary into a Left Bank, where cabernet sauvignon is considered royalty (e.g., Château Mouton Rothschild.), and the Right Bank, where merlot and cabernet franc are king and queen (e.g., Château Pétrus.). Petrus has been awarded 100 points for nine of its vintages by influential wine critic Robert Parker, making it the highest scorer of all of Bordeaux wines and outranking any of the Left Bank first growths.

“Beyond owning an exceptional spot to grow grapes, the Youngs are actively involved and are long-term, thoughtful and practical thinkers,” said Hill. “They consider themselves stewards of the land and farm the site organically, with attention to every detail.”

“We are all really big on doing high-quality work,” said Jim. “We want to understand as much as we can about it to achieve that quality, and we want to do as much of the work ourselves as is practical.”

“Each family member brings something special to the mix,” said Jacky.

“If you think of winemaking as 10,000 decisions, then we want to have both an understanding and input into as many of them as possible,” said Scott. “My work with former Spottswoode winemaker Jennifer Williams has taught me so much, and my dad’s slightly obsessive nature when it comes to the details, coupled with my mom’s real passion and technical understanding for wine all helps drive the process forward. I feel fortunate that we’re all so close.”

“Jacky sets the tone and knows what it takes to craft a wonderful wine — she’s been studying winemaking at some level or another throughout our entire life together, and Scott’s experience at places like Puligny-Montrachet and Domaine Leflaive in France really added in another level. Between her and Scott, the wines take on a new level of sophistication and depth,” said Jim.

Sophistication and depth are apt descriptors for the wines we tasted in the winery’s light-filled tasting room, accented by the family’s colorful art collection. The two wines I tasted included two wines that will be released in early March — the 2012 “Right Bank” Merlot and cabernet franc blend ($75) and the 2012 estate cabernet sauvignon ($90). The Right Bank was opaque in the glass with aromas of plum, blueberry and violets mixing with vanilla. In the mouth, the wine had expansive richness coupled with smooth tannins that mingled with blackberry jam, clove and milk chocolate and a finish that seemed to last for minutes. The cabernet was dense with aromas of dark fruit and sweet oak.

On the palate, pure flavors of dark cherry and dark tea finished with subtle hints of eucalyptus and porcini mushroom.

According to Karen Williams, the proprietor of St. Helena’s ACME wines, “St. Helena itself is idyllic for making excellent wine, but some of the oft-driven side streets can be hiding treasures,” she wrote in an email. “And the quaint and picturesque site of the Young Inglewood Estate is one such treasure. The Youngs’ focus is clear, producing elegant, beautifully balanced wines with a tribute to both the left and right banks of Bordeaux, adding a lushness that California wines can naturally possess.”

Williams is nearly famous for her ability to spot relatively unknown but excellent small production wines before they become popular and out of the reach of many consumers.

“We especially value the spirit of cooperation that’s alive and well in the winemaking community here in Napa Valley,” Jacky said. “In our experience, that’s not something you find everywhere. And we feel fortunate to be creating wines as a family. We only make fewer than 800 cases annually, but we welcome guests to taste the wine and have a stroll through our vineyards and gardens.”

Beyond those tasted, the family makes other wines that include two single-vineyard chardonnays from Napa Valley and the Sonoma Coast. Tasting at Young Inglewood is available by prior appointment only.

Luna Vineyards marks its 25th anniversary in 2020. When Mike Moone founded the winery on Silverado Trail in 1995, with an eye for innovation, …

If we could have dinner with anyone in the world, who would we invite?

Scott Young (right) and his mother Jacky share the winemaking responsibilities at Young Inglewood Winery. Scott’s father, Jim (left), normally focuses on the operational side of the business but in the picture is taking a barrel sample. All three family members are involved in the day-to-day operation of the winery, which often includes tasting wine with guests at their tasting room. The Youngs’ daughter, Mary (not pictured), retains an active advisory role in the wine business but is presently finishing up her master’s degree in music.

Jim (right) and Jacky Young and their son, Scott (center), of Young Inglewood Winery greet customers in their tasting room.