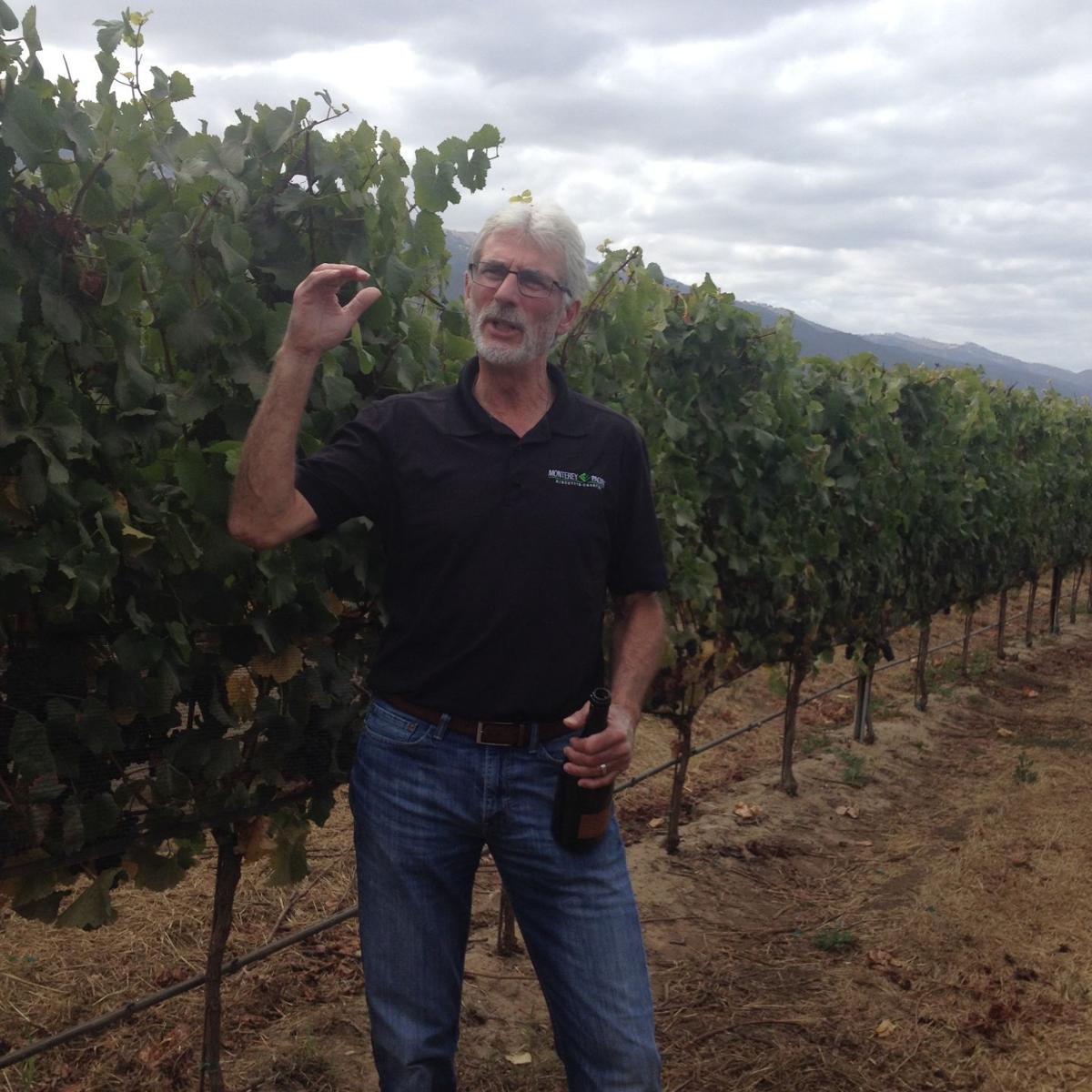 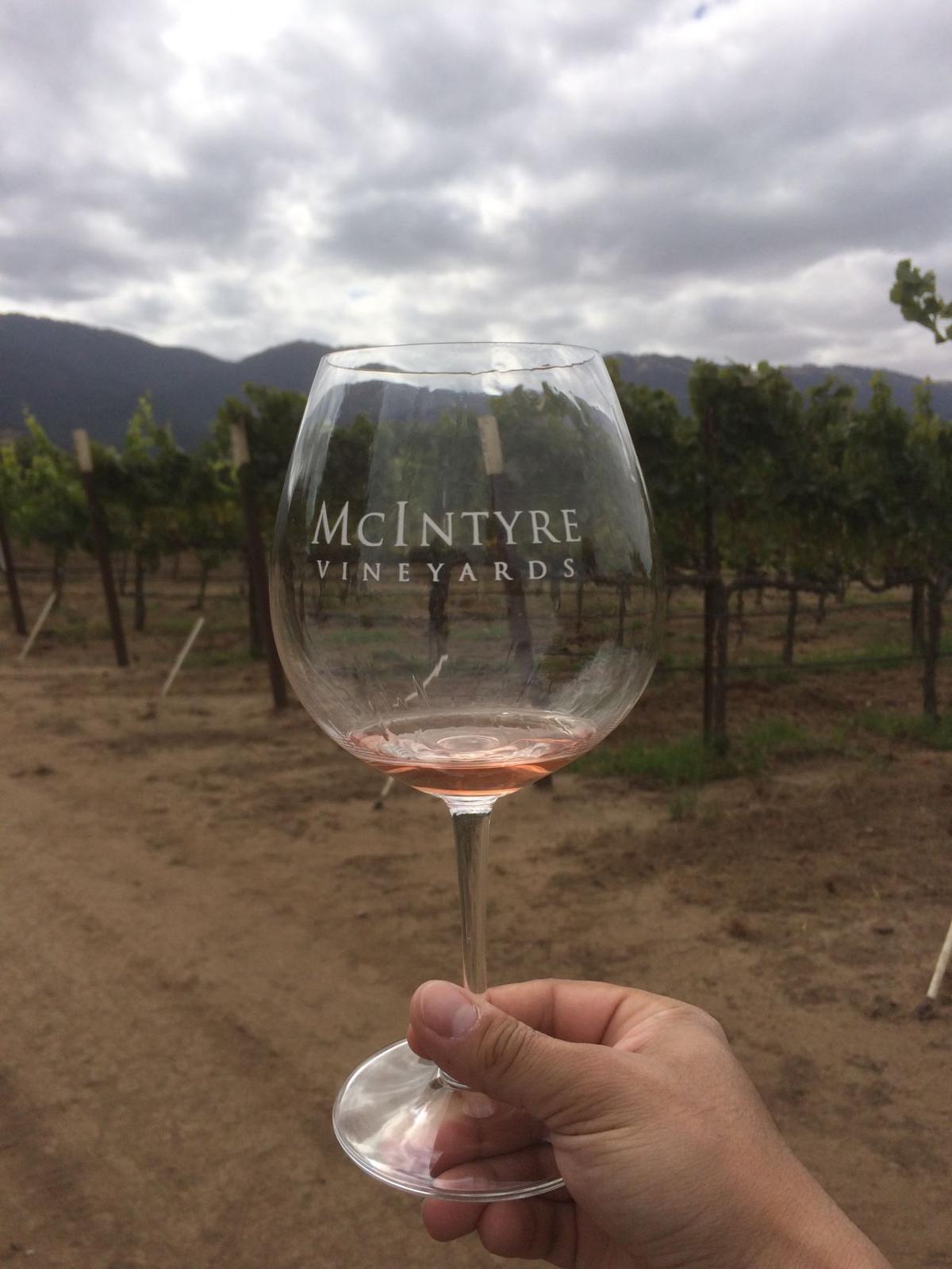 Wine tasting in Santa Lucia Highlands of Monterey County: Long-time vintner Steve McIntyre met us, a traveling group of wine writers, in his vineyard. He pulled up in his pick-up truck, jumped out, opened the tail gate and rummaged around for glasses to give us tastes of his McIntyre rose of pinot noir, chardonnay, and pinot noir.

There are only a few spots in the world that can consistently grow world-class pinot noir grapes, McIntyre said. One of them is the Santa Lucia Highlands, this slender 12-mile stretch of land perched on the eastern slopes of the Santa Lucia mountain range. The unique conditions of the Highlands, its morning fog and afternoon winds, its cool climate, low rainfall and long growing season, all contribute to create an area distinct enough to merit its own appellation within the greater Monterey AVA.

Any minute, he told us, the winds would be arriving; they can tell the time by the winds that sweep in every afternoon at 1 p.m. from the Monterey Bay and down the Salinas Valley.

McIntyre would be one to know. Since the 1970s, McIntyre, a winemaker and a grapegrower, with degrees in both oenology and viticulture, has been working in the area. In 1987, following many years as winemaker at the Smith & Hook winery in the Santa Lucia Highlands, he purchased this 80-acre vineyard with some of the district’s oldest pinot and chardonnay vines, planted in 1973 and launched his own label. His vineyards, which include another 80-acre parcel, have become his living laboratory, where he has experimented with new clones, different trellising systems, and farming methods.

And he is also the owner of Monterey Pacific vineyard management company that farms 12,000 acres in Monterey County.

McIntyre has also been a pioneer in sustainability. A founding member of the Central Coast Vineyard Team, he was one of the originators of SIP—Sustainability In Practice—certification program. The McIntyre Estate Vineyard was among the first properties in the Santa Lucia Highlands to be SIP-certified. Sustainable wine grapegrowing, he said, “is part of a ‘big picture’ philosophy that takes into account fiscal, social and environmental issues. To earn a SIP certification, growers are evaluated on everything from human resource management to habitat conservation.

“’Green’ is more than a catch phrase here,” McIntyre said, adding that conscientious viticultural standards, whether organic, biodynamic, or sustainable, have long been the norm.

Was it just my imagination or could we taste the sea wind, the morning fogs and mountain air in the wines? Probably imagination. But either way, the wines were fresh, balanced, elegant and delicious.

The best way to taste them—aside, of course, from standing in his vineyards and chatting about them with him—is to visit the McIntyre Vineyards tasting room in Carmel-by-the-Sea. It’s open Tuesday to Saturday, 11 a.m. to 7 p.m., Sunday 11 a.m. to 6 p.m. and Monday by appointment, at 169 Crossroads Blvd., Carmel. For details, call (831) 626-6268 or visit www.mcintyrevineyards.com/

I’m heading back soon to taste the McIntyre sparkling wine.

“It’s all about families here,” said Muret, who met us for breakfast at the at Monterey’s Intercontinental Hotel the Clement on Cannery Row, after depositing his own son at school. “And it’s all about long-term farming.”

In the 1790s, the missionaries and Spanish conquistadors planted the first grapes, in what would, centuries later, become the Santa Lucia Highlands appellation. The modern era began in the early 1970s, with Rich and Claudia Smith of Paraiso winery, the McFarland family at Sleepy Hollow, Phil Johnson at La Estancia, and Nicky Hahn at Smith & Hook. The pace accelerated in the ‘80s and ‘90s, and swiftly, the region won acclaim for its premium pinot noir and chardonnay wines.

Still, it remains a challenge to visit wineries in the Highlands, Muret admitted.

For example, the excellent August West wines, which we tasted at the home of the wineries co-owner John Peterson, are made in San Francisco by Ed Kurtzman.

The focus is really on the exceptional grapes that the Highlands can produce with reliable consistency. It’s an area where farmers have been living and working for generations, Muret said. “These are “long-time farmers with a body of knowledge that’s generations old.”

Today, about 6,100 acres of the 22,000 acres comprising the Highlands, have been planted to grapes, primarily chardonnay (2,060 acres) and pinot noir (3,095 acres), but with other varieties being added to the mix. Of these riesling, syrah, pinot gris, and viognier are the next most planted varieties and according to Muret’s records, 40 and fewer acres are planted to sauvignon blanc, malbec, gewurtztraminer, grenache noir, muscat canelli, roussance and grenache blanc.

“This terroir,” Muret said, “influences everything we do.”

Definitely worth seeking out, this taste of the Santa Lucia Highlands.