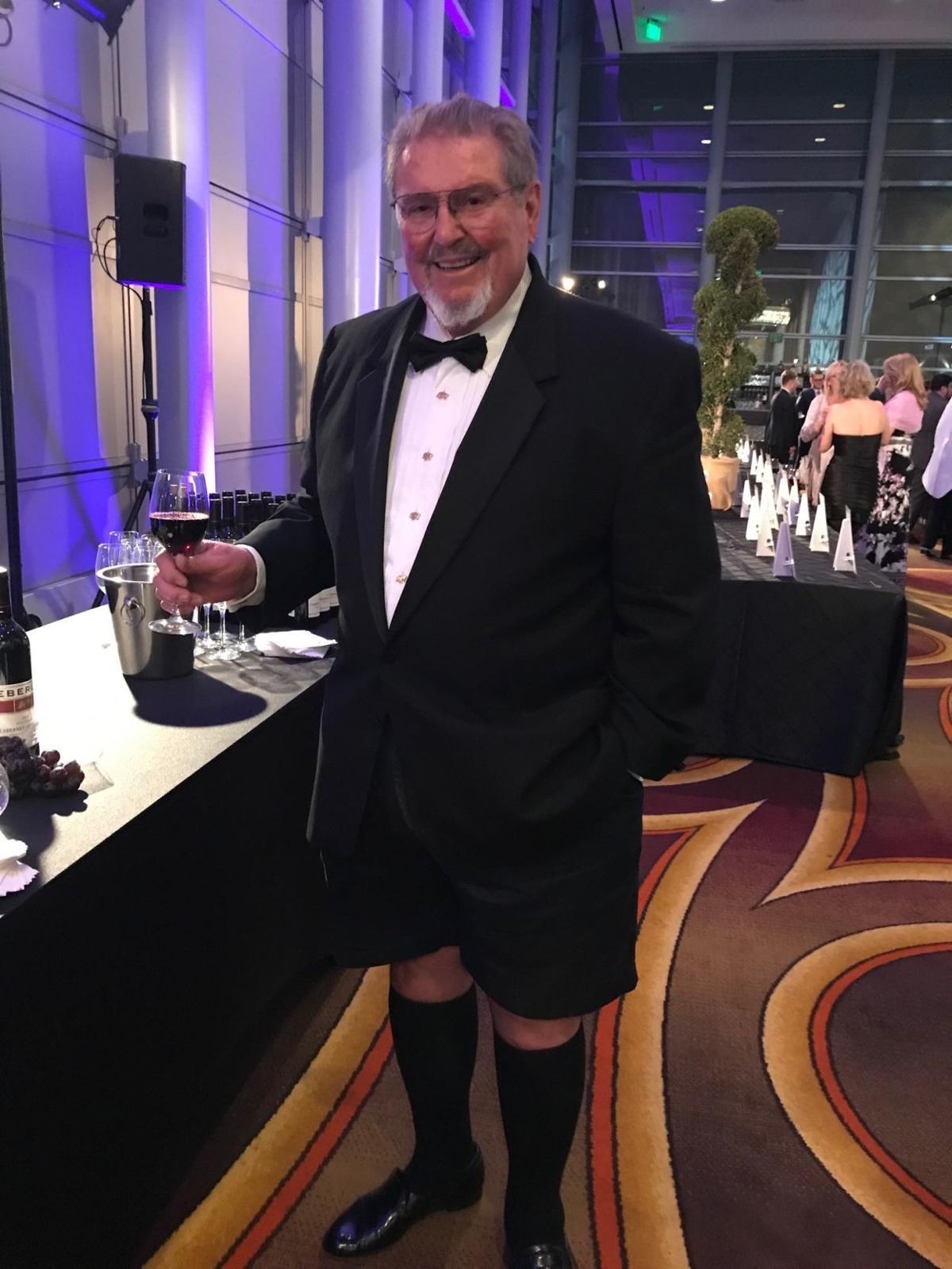 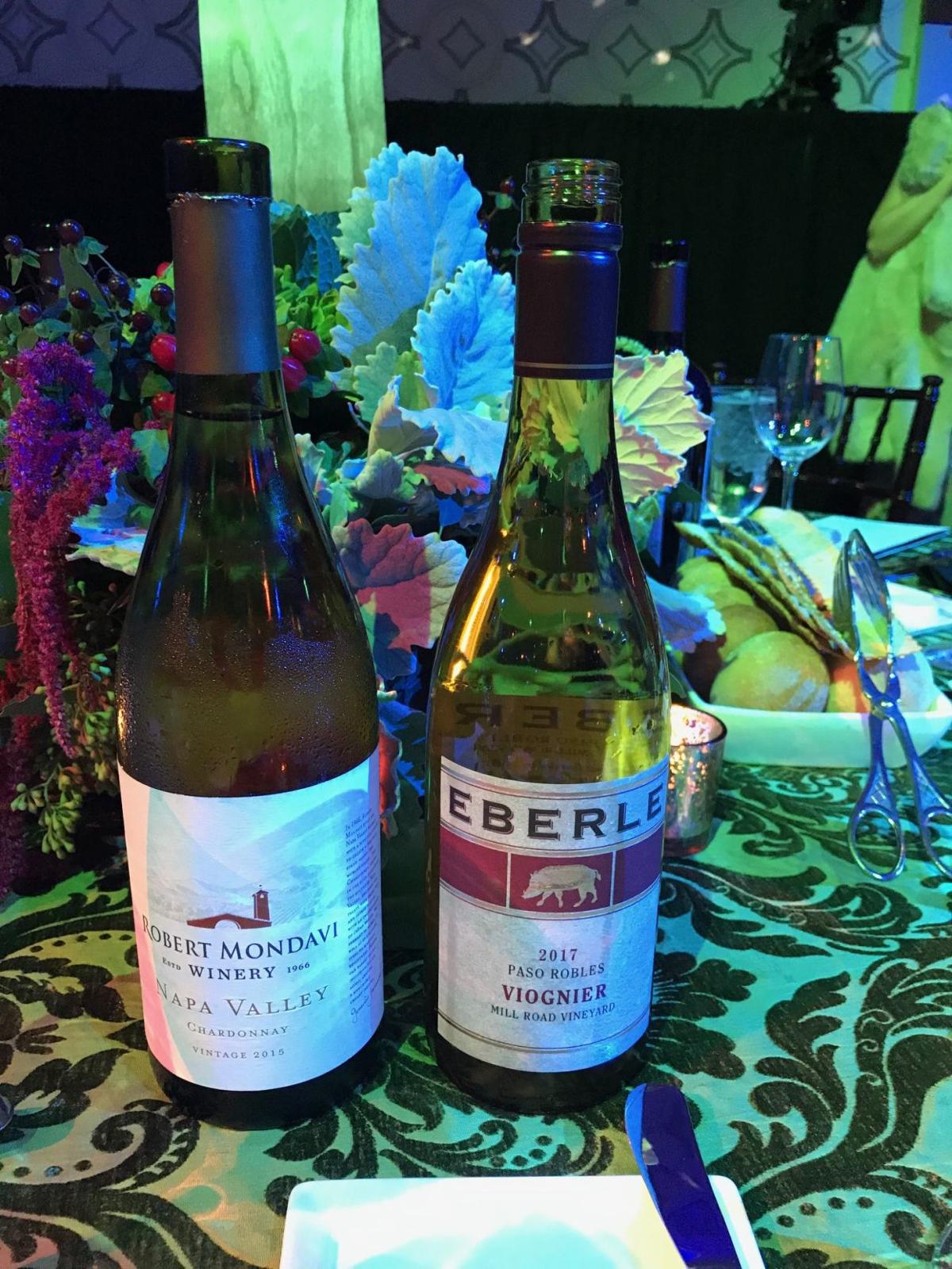 Both Eberle and Mondavi wines were served at the March 2 Hospitality Uncorked event that honored Eberle.

The honoree came in shorts. That, too, is part of showmanship.

The evening, billed as Hospitality Uncorked, offered a colorful Alice in Wonderland theme that brought out whimsical hats and bright costumes. Eberle, true to his love for the casual, sported a tuxedo ensemble that included long black shorts complete with knee-high socks and dress shoes.

The Mondavi connection has come full circle for Eberle, a former athlete and genetics student, who is currently celebrating his eponymous winery’s 40th anniversary and who is to Paso Robles what Robert Mondavi was to Napa Valley. At the event, Eberle said he was thrilled to be reunited — if only by getting mentioned in the same breath — with his former mentor.

Eberle first met Robert Mondavi during his years at UC Davis. “After Friday classes, a truckload of graduate students would head to the Mondavi winery in Napa Valley,” Eberle recalled. The laboratory technician would open some bottles for the students. It was at such informal gatherings where Eberle struck up a friendship with Mondavi, who became his mentor and told the young winemaker to call on him when he had questions.

Eberle took up on Mondavi’s offer and would visit him on trips to Napa. “We would go out to lunch — and he paid for lunch,” Eberle said.

Little did Eberle know that some day not only would Mondavi purchase Paso fruit from him, but that he would be honored with the coveted Mondavi award in the year of his 75th birthday.

Eberle was startled when approached about the honor by Cal Poly Pomona last October. The award, usually meant for professionals in the restaurant or food industry, has been given to such names as the late Julia Child and Alice Waters. “I’m the only third wine person to get this,” Eberle noted.

The award was launched in 1999, by the Collins College of Hospitality Management and was first given to Robert and Margrit Mondavi, followed in 2017 by Napa residents Gina Gallo and her husband, Jean-Charles Boisset. The Hospitality Uncorked fundraiser brings together Southern California’s hospitality industry, which supports the Collins College at Cal Poly Pomona.

Eberle’s contributions to the California wine industry are numerous. He was instrumental in establishing the Paso Robles appellation and is considered the father of California’s Syrah.

At UC Davis, the late Dr. Harold Olmo, a renowned viticulturist, told Eberle about Syrah vines growing on the campus, clones that came from Chapoutier in France’s Rhone Valley. Graduate students were encouraged to practice pruning in this 1.5-acre vineyard, later demolished for freeway construction. Eberle took a few cuttings to a local nursery and began planting in 1975 in Paso Robles.

Was it illegal to take these cuttings? “It wasn’t illegal so much as it was unethical,” said Eberle, who has just recently started to recount the story.

Eberle’s initial planting of an 18-acre vineyard in partnership with vintner Howard Steinbeck on his namesake ranch in the Estrella District on Paso Robles’ east side is now acknowledged as the beginning of Syrah plantings in the US. “At least 60 percent or more in the state and U.S. Syrah can be traced back to Chapoutier,” said Eberle of what is today called the Estrella clone and not, surprisingly, the Chapoutier clone.

In Paso Robles, Eberle is known not just for his award-winning wines, but his overall approach to the industry — taking extra care of staff and visitors and promoting Paso Roble’s wine region. “It’s all a part of hospitality,” the vintner said.

When at the winery, Eberle’s favorite spot is at the entrance seated on the patio welcoming guests. He learned from Mondavi, who would greet his guests under the arch of winery’s entrance in Napa Valley. “I stole his idea. I didn’t invent it.”

For Eberle, Mondavi was the P.T. Barnum of the wine industry promoting Napa Valley and California. “That’s what I do, too: I market Eberle, Paso and California wines, in that order.”

Both Eberle and Mondavi wines were served at the March 2 Hospitality Uncorked event that honored Eberle.