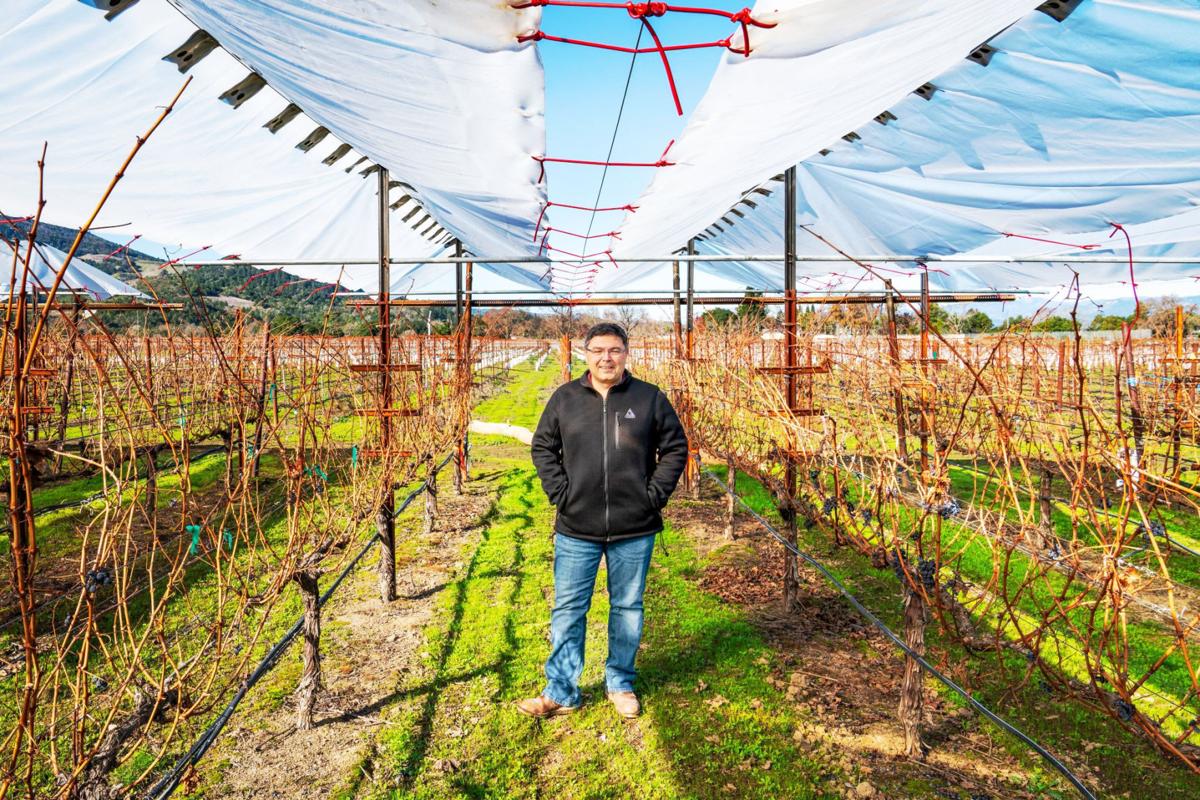 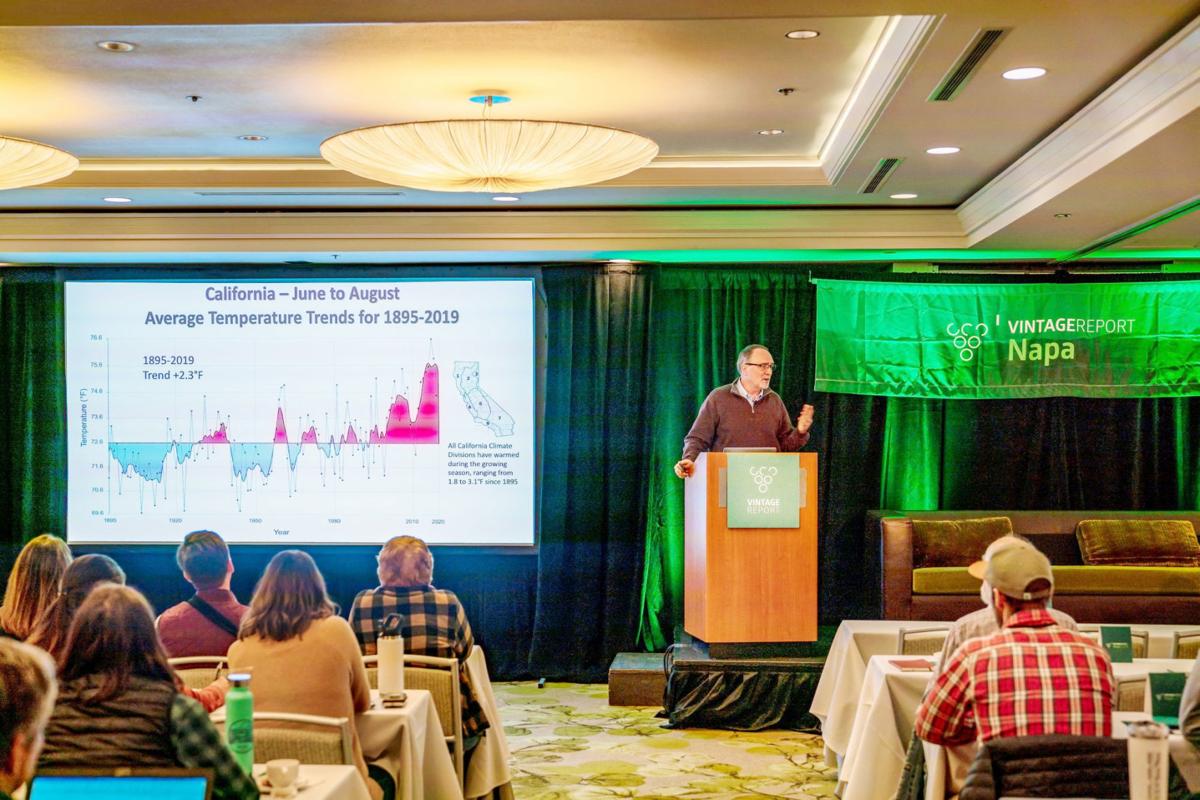 Gregory Jones, director of wine education and professor and research climatologist in the Department of Environmental Studies at Linfield College in Oregon, gives a talk at the recent Vintage Report seminar in Napa. In his talk he reported that temperatures in California have risen 2.3 degrees Fahrenheit since 1895 and that the trend will continue. 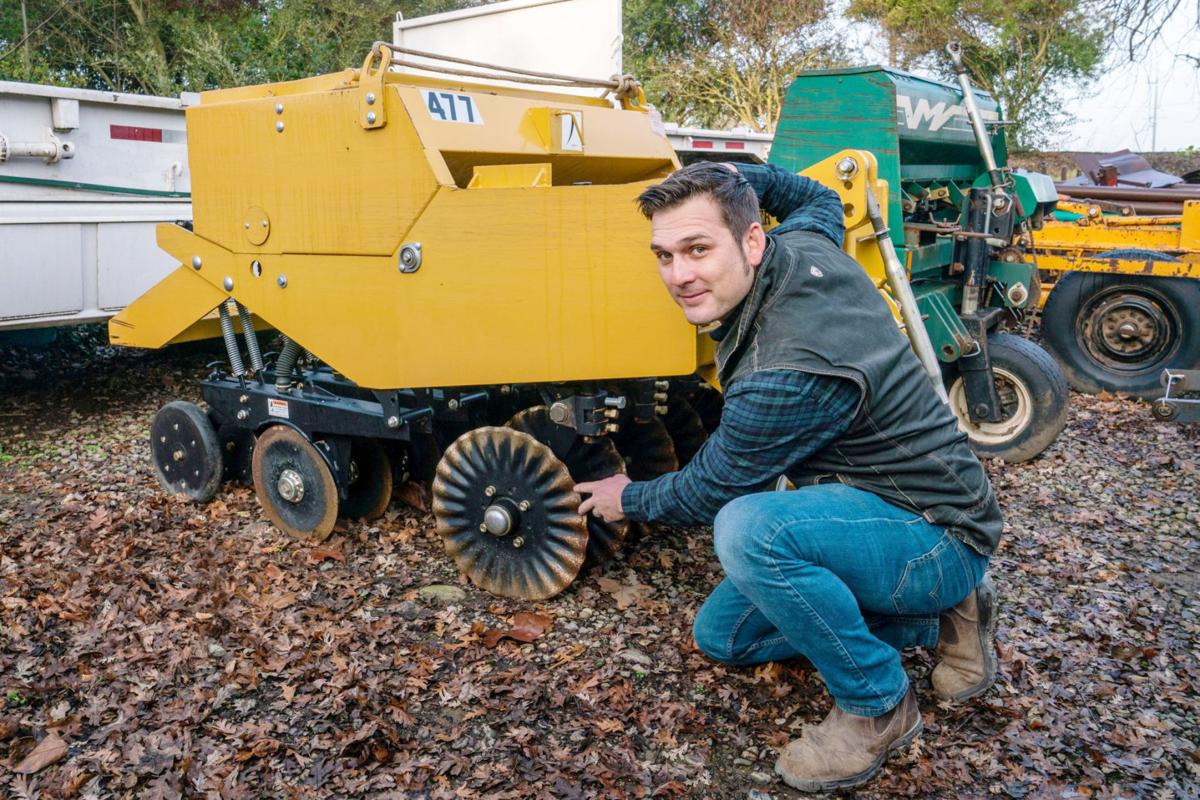 Caleb Mosley, senior viticulturist at Michael Wolf Vineyard Services, shows a “no-till-drill” that allows the planting of cover crops without tilling the soil.

As temperatures rise, the results are increased variability and extreme weather conditions.

Exactly how the Napa Valley and other wine grapegrowing regions respond and work to help alleviate the human-made causes of the problem present both a challenge and an opportunity.

“Because of changing climatic conditions, in the last few years there’s been a big shift in how vineyard owners plan new vineyards and manage their existing vines,” said Caleb Mosley, senior viticulturist at Napa’s Michael Wolf Vineyard Services. “With the anticipation of even higher temperatures in the future, we’re looking for ways to deal with extreme weather events while at the same time exploring ways to reduce our carbon footprint.”

The future: increased variability and extreme conditionsThe greatest cause of recent climate change is greenhouse gases, including carbon dioxide and nitrous oxide, both of which can be generated through a host of human activities, including agriculture. The result of increased levels of greenhouse gasses, according to experts, is that temperatures in California have risen 2.3 degrees Fahrenheit since 1895. That trend is expected to continue.

“Based on ensemble modeling [an evaluation of 10 to 20 different climate models], we predict that within 20 to 30 years local temperatures will rise 1 to 1.7 degrees overall, with a 2.0 to 2.2 increase of temps during the growing season,” said Gregory Jones, director of wine education and professor and research climatologist in the Department of Environmental Studies at Linfield College in Oregon. “That might not sound like a lot to some, but this will have a big impact on many agricultural products such as wine grapes.”

As the climate changes, agricultural crops that have grown in one location may become ill-suited to thrive under newly changed conditions. Perhaps this is nowhere more apparent than within the world of vineyards, where particular grape varietals are inextricably linked to the localized microclimates and where unpredictable and extreme weather such as droughts, floods, strong winds, severe frosts and fires render producing a consistently high-quality crop difficult or even impossible to grow.

Hotter in the summer and warmer in the winter

High temperatures above 90 degrees Fahrenheit during the summer’s growing season can cause a grapevine’s metabolism to shut down and also result in sunburned grapes, which reduces their ability to synthesize flavor and color chemical compounds. However, warmer temperatures during the winter months also have a negative effect. Grapevines normally go dormant during the winter and require a certain number of chilling hours — the number of hours with temperatures below 50 degrees Fahrenheit — in order to maintain dormancy, even if there is a warm day or two. When that number of chill hours (roughly 150 for wine grapes) isn’t met, a vine can prematurely begin to grow new shoots earlier than normal, making it susceptible to frost events.

Another problem with less-cold winters is the increased spread of disease, experts said. Prolonged below-freezing periods can reduce the numbers of disease-carrying pathogens in an area. Without this natural hindrance many worry that insects, viruses, molds and fungi newly arrived to the region will thrive and bring with them a host of new problems.

Higher temperatures change where and which grapes can be grown

Even as global temperatures rise, vineyards are now being planted in locations that wouldn’t have been hospitable even a generation ago. Historically vineyards have been limited to between 30 to 50 degrees latitude, basically ranging between southern California and northern Washington state. However, these historic limits are now shifting. In England (55 or more degrees north latitude) wine grapes are now being grown, and the same goes for Canada, northern Germany, Belgium, Denmark, Sweden and even Norway (60 or more degrees north latitude).

The shift is also rendering some existing vineyard locations warmer, causing earlier harvests and changing which types of varietals are being planted. In France, hotter temperatures over the last three decades reportedly have hastened harvests in Burgundy, pushing them on average two weeks earlier than they’ve been over the last six centuries.

Locally, vintners such as Dan Petroski, winemaker at Larkmead, have embarked on what they refer to as their “21-year plan” that attempts to explore varieties other than Cabernet Sauvignon that might be better suited for higher temperatures, such as Aglianico and Tempranillo.

To better understand how grape growers might combat rising temperatures, UC Davis is at the forefront of research.

“Our scientists have developed molecular markers to determine water stress levels and solar radiation damage,” said Kaan Kurtural, assistant cooperative extension specialist in viticulture with the university’s Department of Viticulture and Enology who runs the department’s Napa Valley Oakville Station, a 40-acre research vineyard. “We are also exploring different farming practices to protect grapes during high-heat events, such as using shade cloth. We are also evaluating various methods to decrease carbon emissions and increase carbon sequestration within the vineyard itself.”

Because plants and animals (including soil microbes) are made mostly of carbon, when they grow and remain intact, carbon is sequestered in place. However, practices such as burning old discarded vines after removal or tilling soil can release carbon back into the atmosphere.

“Beyond maintaining the highest quality in the vineyard, resilience is our goal now,” Mosley said. “Most vines are currently being replaced every 20 to 30 years, but we are looking to increase that to 50 years plus, which increases the carbon permanence of the vines. This requires that we use longer-term thinking when it comes to improving soil health, using no-till farming, picking the appropriate cover crops and rootstocks, and making sure that our vineyard practices are in balance with the plant and vineyard’s needs.”

The Napa Valley and its community are on the leading edge when it comes to how to best address climate change in the vineyards, Mosley said. “There are a lot of great practices out there already being shared between growers, scientists and vintners, but there’s still a lot of work to be done.”

Eating a plant-based diet one day out of seven will reduce methane emissions from animal husbandry.

15 Northern California wine, whiskey and beer festivals in March and beyond

Spring is full of events for lovers of wine, whiskey, beer and food.

Microgrids: The future of business and farming

Please educate yourselves on words

Letters: Variety and Varietal are not interchangeable.

Tim Carl looks back to the evolution of the Napa Valley dining scene and wonders, in light of the COVID-19 pandemic, what lies ahead.

After the Sept. 11 terrorist attacks, artist Mario Chiodo wanted to do something to address the hatred that had fueled them. The result is his sculpture honoring people who have worked to make the world a better place.

Farmers have to comply with a complicated series of rules to achieve certification from the Fish Friendly Farming program, but 90% of the vineyards in Napa County have qualified.

The Napa Valley Grapegrowers (NVG) has named Larry Hyde of Hyde Vineyards as the recipient of the 2020 Napa Valley Grower of the Year award.

A mobile health van can travel to vineyard sites during harvest and test up to 100 farmworkers per day.

Gregory Jones, director of wine education and professor and research climatologist in the Department of Environmental Studies at Linfield College in Oregon, gives a talk at the recent Vintage Report seminar in Napa. In his talk he reported that temperatures in California have risen 2.3 degrees Fahrenheit since 1895 and that the trend will continue.

Caleb Mosley, senior viticulturist at Michael Wolf Vineyard Services, shows a “no-till-drill” that allows the planting of cover crops without tilling the soil.