Become a Member
Read Today's E-edition
Share This
Grapes of Black and Gold: Three wine veterans share a vision for Rhône varieties in Mendocino
Share this
1 of 3 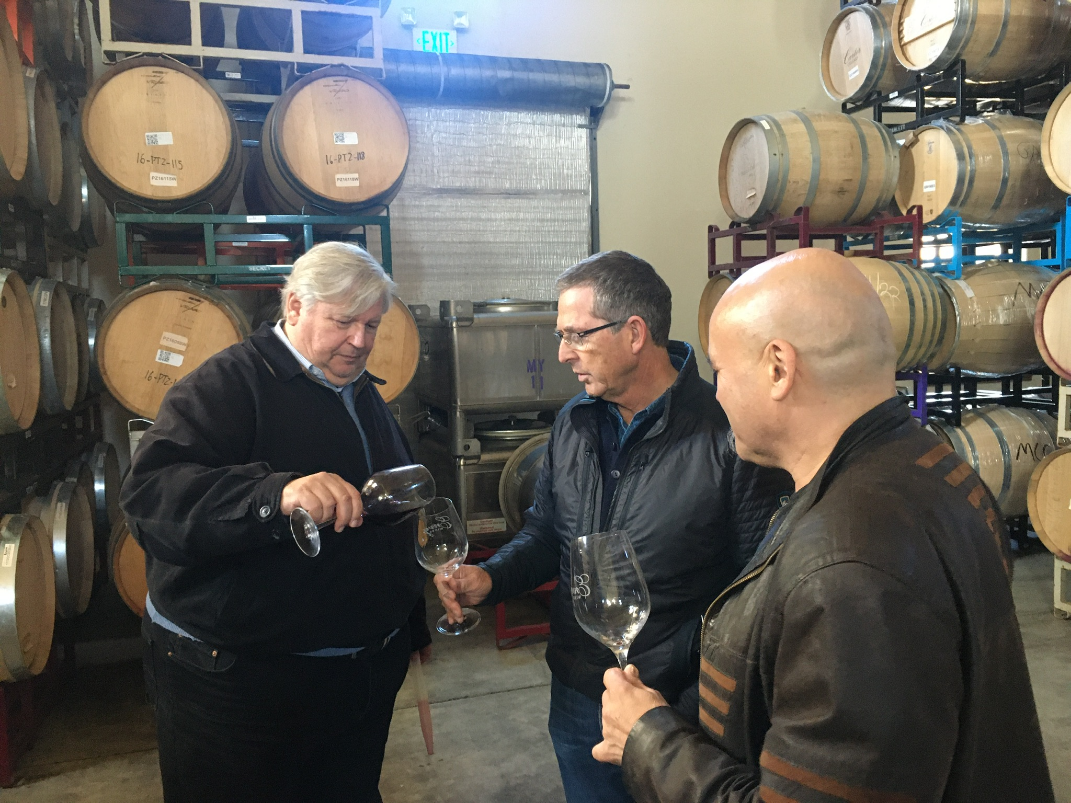 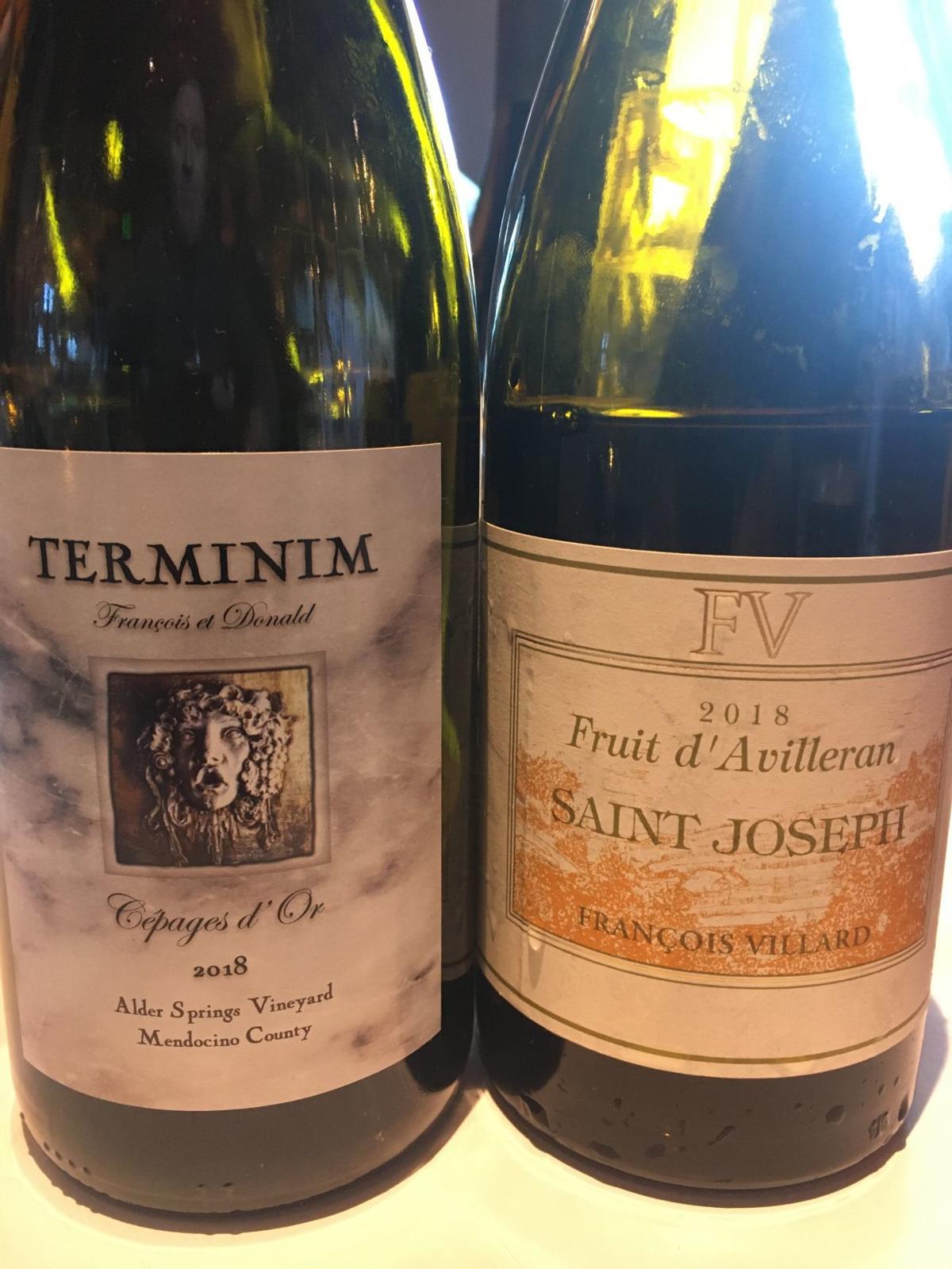 The Terminim and Villard labels. 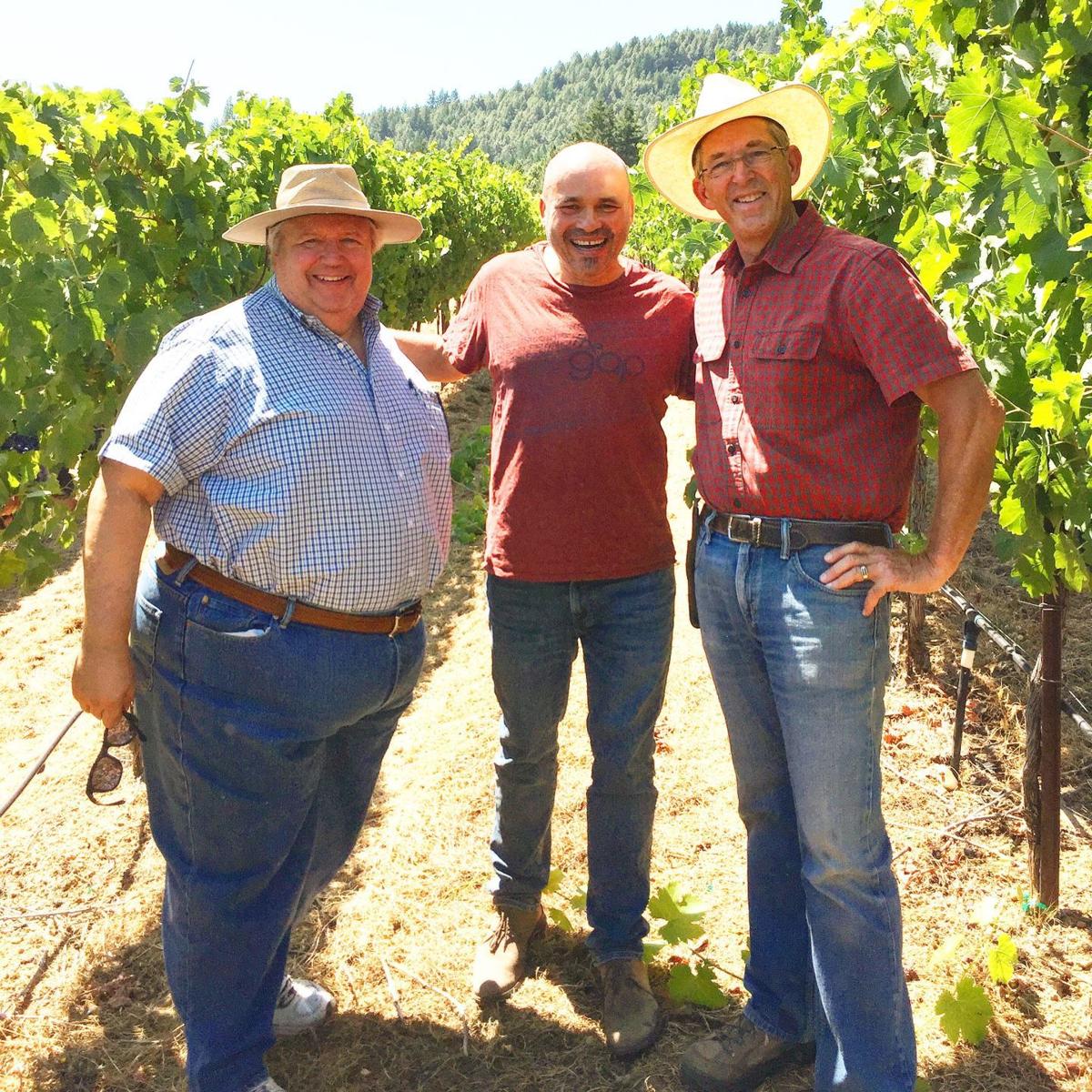 Wedged into a corner at Envy winery in Calistoga, the 20 oak casks hardly stand out from others piled halfway to the ceiling.

Napa Valley Cabernet they are not. The barrels of Syrah and white Rhône varieties from Mendocino County belong to Terminim Wines, a 2-year-old project and the brainchild of Napa’s Donald Patz. To produce them, the industry veteran partnered with François Villard, a respected winemaker in France’s northern Rhône Valley and a master of Syrah, Viognier, and other noble grapes grown in this ancient region.

By most production standards, it’s a small stack of barrels, but the wines they contain could end up making a big statement.

Patz and Villard refer to themselves, on their bottles and in person, as collaborateurs. With one foot in California and another in France, Terminim is a long-distance and, indeed, multi-lingual arrangement. Communication is mainly through email and text messages, with accompanying photographs and data that allow the Rhône winemaker to make decisions Patz might not be able to on his own.

In person, Villard gets to practice his English standing around barrels and winery equipment — and also over lunches, dinners, and plenty of tastings with the California colleagues he calls his friends.

“You know, it’s kind of amazing,” said Patz in a recent phone call. “Probably two or three times a year. Depending on what his schedule and availability are, François is here. And he really is involved with the winemaking. It’s not like, ‘Do whatever you want to do, Donald, and then you can use my name.’”

In 2016, Patz and his former partners sold their popular label, Patz & Hall. Now, his two-decade relationship with one of the grape growers who helped put that brand on the map is bearing a different kind of fruit. François Villard has everything to do with it.

“When I used to go up to look at Chardonnay and Pinot Noir for Patz & Hall, I’d drive by the Syrah and think, ‘Oh my God, that stuff looks gorgeous,’” Patz said, recounting trips to Alder Springs Vineyard near the Mendocino County town of Laytonville. “It’s my favorite place in California for Rhône varieties. I mean, certainly other people do well with them, but I just always coveted Stu’s Syrah in particular.”

As it turns out, Patz had lots of company.

Alder Springs is a 6,000-acre ranch that its owner, Stuart Bewley, began to plant with grapevines in 1993. Last month, during a visit with the Terminim partners to taste through their wines in barrel at Envy, Bewley described his large property as contiguous but very spread-out, viticulturally. “Some of the vineyard blocks are miles away from each other,” he said.

The patchwork of vine plantings at Alder Springs notwithstanding, there has always been a concentration of artisan winemakers vying to get their hands on the Syrah and Viognier grown there. Patz is just one of the latest.

In June of 2017, he conceived of Terminim with the help of a mutual friend of his and Villard’s in Napa. He asked Bewley if he planned to have either or both varieties available in the upcoming vintage. The grower told him he’d have to wait in line.

“’I’ve got it all sold,’” Patz recalled hearing Bewley say over the phone. “’Everybody wants more. I’m really in a great position with both of those.’ So I was a little disappointed. But, you know, that’s the way it goes sometimes.”

A short time after the call, their mutual friend, Jack Edwards, announced that Villard was coming to California for a late summer visit before harvest began in the Rhône Valley. Edwards’ company imports Villard’s wines into California and a handful of other states, and the two are close friends.

It gave Patz an idea.

“At the beginning of August, I called up Stu again, and I said, ‘I know you don’t have any grapes for sale. But I’d really like to bring my friend, François Villard, up to see your vineyard. And so that at some point in the future, when you do have some available, he’ll be aware of it and we can, you know, get some grapes from you.’ And I heard Stu choking on the other end of the line.”

Bewley was familiar with, and impressed by, Villard’s wines. According to Patz, he changed his mind right then over the phone. “Sure, I’ve got grapes for François!” he exclaimed, to Patz’s amusement.

“Man, 20 years of working together isn’t good enough,” he laughed, “but some Frenchy shows up and Stu’s ready to go to work!”

The “Frenchy’s” reputation precedes him. Villard has been written about in both The New York Times and The Los Angeles Times, and his wines have been extensively reviewed around the U.S. and internationally. Domaine Villard Côte-Rôtie and Condrieu — the northern Rhône appellations made, respectively, from Syrah and Viognier — are sought after by retailers, sommeliers, and collectors with a level of enthusiasm usually reserved for fine Bordeaux and Burgundy.

Villard, in the meantime, is enamored with Napa Valley and California, and Terminim isn’t his first winemaking project here.

Along with Jack Edwards and Edwards’ former boss, Dave Miner, he came up with the idea for La Diligence, a former second label at Miner Family Winery. The wines were based on Syrah and Marsanne, another white grape Villard works with at home in the Rhône. The plan was hatched in 2002 at a bar in Paso Robles—over margaritas and despite an almost complete language barrier—and realized two years later at Miner’s Oakville winery.

Looking back on that first foray into California winemaking and the experience Villard has built upon since the early 2000s, Patz sees a partner hitting his stride with the Alder Springs fruit.

“He actually hasn’t said this to me specifically, but I kind of think that these Terminim wines are more a reflection of the kind of wines that François wanted to make in California,” he said. “But that’s just a broad-stroke impression.”

At the Envy barrel tasting last month, Villard painted a more detailed picture of how he believes the project fits into the larger California landscape of Syrah and white Rhône blends, most often combinations of Marsanne, Viognier, and a third variety, Roussanne. All three grapes figure into Terminim’s proprietary white wine, called Cépages d’Or. It’s French for “grapes of gold.”

While Patz bounced from cask to cask, pulling samples of still-fermenting 2019 whites and finished ’18 Syrah to share with Bewley and Villard, the Frenchman raised a glass of the latter to his nose and smiled.

“If I say it’s the best Syrah I’ve ever drunk in California?” he half-giggled. “No, but seriously, c’est très bon. It’s very good. I really think Alder Springs is a great terroir. I think that, maybe on these vintages, we have the possibility of really seeing the quality of the terroir.”

Just a couple of weeks earlier, on a train ride from Paris to Lyon, Villard had answered questions via email about Terminim Wines, and specifically about his and Patz’s working relationship. “What really pleases me in the Terminim project is that Donald is someone who is always positive, and he still wants to realize his dreams,” he wrote.

“I have carte blanche. This allows me to experience my ideas on the vinification of grapes produced 9,000 kilometers from my winery. I give my ideas and Donald accepts them with a smile.”

He compared Terminim to the earlier collaboration with his friends at Miner Family and found his own reasons to be positive. Creating the Diligence wines, Villard explained, “was not a quality problem, but I wasn’t a master of my subject. With Terminim, I am very proud because this wine looks like my wines” in the Rhône Valley.

Back at Envy, Patz moved excitedly among the barrels like the proverbial kid in a candy store. He waved a wine thief to get his colleagues’ attention. “Now, keep up, boys!” he ordered, holding out a glass pulled from one of the Syrah barrels to pour into theirs.

Bewley swirled the jet-black wine in his glass while he reflected on what the partners had created from his grapes. “There’s philosophy behind it. There’s terroir that you experience with these wines. I think that when you get too ripe, you lose the terroir, and these wines are not that way.”

He shared an opinion, held by many who make and sell Rhône varieties in California that, unlike Cabernet and Pinot Noir, there are too many styles of Syrah produced in this state. “Consumers aren’t sure when they order a bottle of wine what they’re going to get.”

“But,” he added, “I think that if people were tasting these types of Syrahs, they would love Syrah.”

“This project is not vital, neither for Donald nor for me,” Villard wrote in the email right before his train arrived in Lyon. Then he chose an interesting word: “This is one of the reasons that allows us to realize it serenely.”

The Terminim wines do seem to have a “serenity” to them, in that they’re elegant and don’t attack the palate with tannin or alcohol. They reflect Patz’s ideas for how Bewley’s fruit should smell and taste in the glass. And, just a couple of vintages into the project, they demonstrate Villard’s abilities — and sensibilities — as a winemaker.

“If you look at the back label of Terminim,” as Patz pointed out in his call, “it says ‘François Villard and Donald Patz, collaborators,’ or in French, collaborateurs. And that’s really what it is. It’s sort of a shared vision.”

Malick Koly was child drummer in West Africa and France, then a budding music student and transplant to Napa Valley, and now he is a busy drummer in New York.

The Terminim and Villard labels.