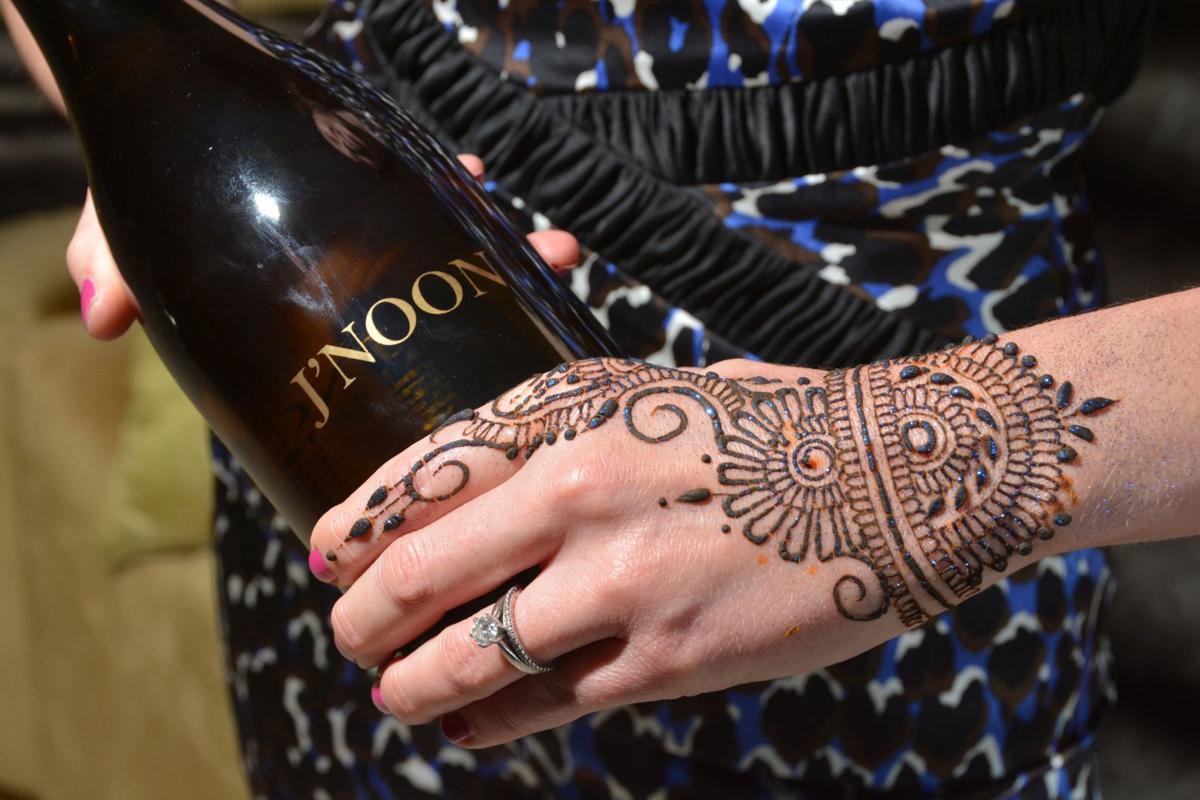 J'Noon is the product of a collaboration between Napa Valley's Jean Charles Boisset and  Kapil Sekhri, proprietor of the Indian wine brand Fratelli Wines. 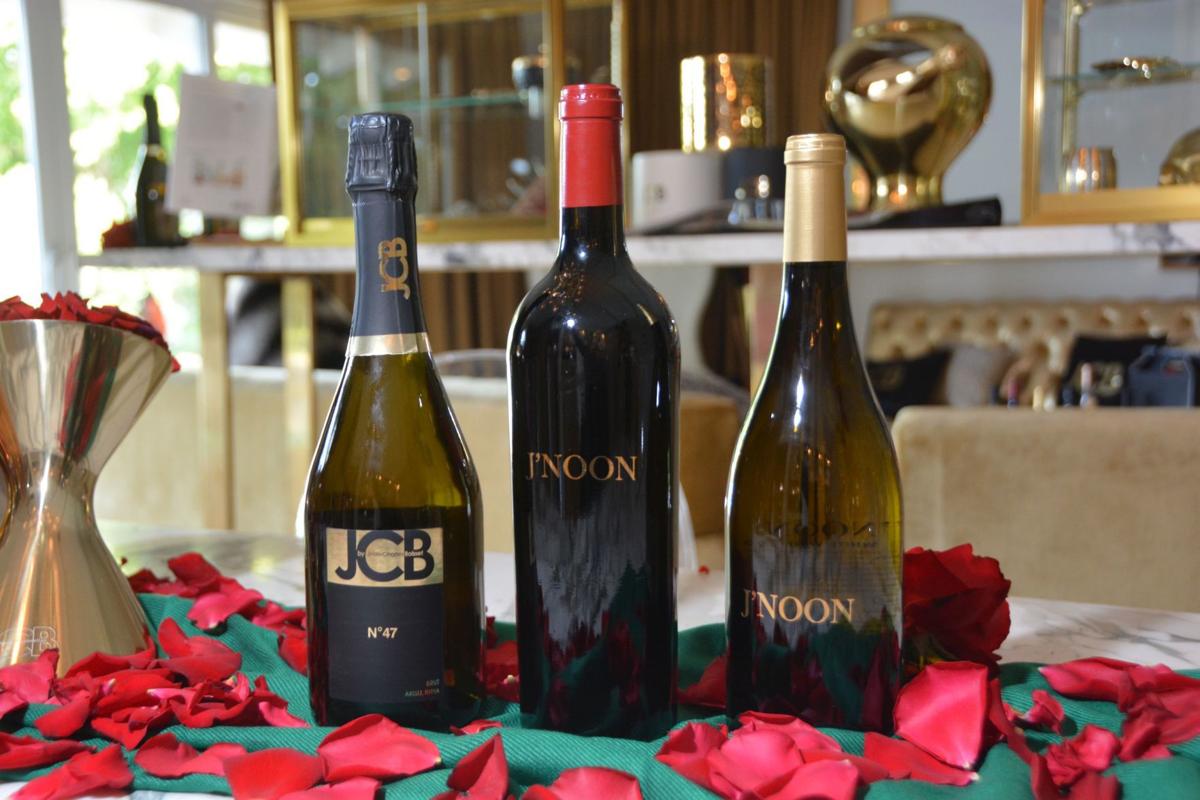 The J'Noon wines include a red, a white and a sparkling.

We wine, food and travel writers are a lucky bunch. We’re constantly getting invited to lavish dinners and lunches, tastings and events, and so much so, that there simply isn’t enough hours in the week or room in the stomach to attend all of them.

But one recent invitation stood out to me for two reasons: the evening would feature wines from India (I hadn’t tried any before) and it would take place at Wappo Hill. The home of Jean-Charles Boisset (JCB) and Gina Gallo-Boisset, it was the former home or Robert and Margrit Mondavi and sits at the highest point of the Napa Valley floor.

The reason for this celebration was to preview three wines (a sparkling, white and red) from a collaboration between Boisset and Kapil Sekhri, proprietor of the Indian wine brand Fratelli Wines. These wines are being released first in the U.S. under the brand J’Noon, which is derived from “passion” in Urdu.

Once parked, I followed the sounds of Indian music, knowing then that I was in the right place. Inside, the house was everything I expected, yet couldn’t quite imagine, of the Boisset house. It matched JCB’s signature, opulent style that’s on display at his tasting rooms like Raymond Vineyards and the JCB Tasting Lounge in Yountville. The stuffed lion that greeted me at the door fit right in.

As the night’s company mingled during the pre-dinner reception, I checked out the unbelievable views and received my first henna tattoo. We then sat down for dinner; the long table was set in front of the indoor pool and featured beautiful and insanelyfragrant, fresh-cut roses. It wasn’t the best recipe for picking out aromas in wine, but lovely all the same.

Boisset officially kicked off the evening, saying, “This was one of the most amazing encounters in my experience in wine.”

His speeches often have a touch of hyperbole. But this time, I’m pretty sure he meant it.

The Journey to Franco-American-Indian Wines

Before meeting Sekhri, Boisset, like all of us in attendance that night, had limited knowledge about India’s wine industry. He was referred to Sekhri by the man responsible for the Judgment of Paris, Steven Spurrier, and the two became fast friends.

It’s easy to see why. Although they come from different parts of the world and wax poetic in different, yet equally thick accents, they’re clearly speaking the same language. As the night progressed, I couldn’t help but notice the obvious similarities between these two “winetrepreneurs,” who are both passionate, ambitious, and like to do things differently.

Boisset, for example, went to his parents years ago with a crazy idea to expand the family wine business in America. His parents weren’t so sure of this “new world” potential at the time, but we all know how that worked out. Sekhri too joined his family’s business, but it wasn’t in wine. Like Boisset, he approached his father with a controversial idea.

“The spirit of controlled capitalism is what drove me into wine. I love the product, I connected with my wife over a bottle of wine, that was the only thing we had in common, and I think it’s the beauty of the product, it’s art for the senses,” said Sekhri, whose father was also initially skeptical.

“All business meetings in the house happen on Sunday mornings over breakfast with father. I told him, ‘Hey listen, I’m thinking of doing something different, getting into the wine business.’ He said, “Why don’t you make some wines and be done with the hobby,’ and I said, ‘I think it’s a little bit more than that.’

Much bigger, in fact.

“Now we have about 250 acres of land. We’ve done many firsts in the country, bringing in many varieties, which were not planted before, a lot of rootstock that hasn’t been planted before, but that’s what we want to do,” he said. “We want to try everything out. There is no book that can tell you no. Just try it out. What works, bring it on; what doesn’t, forget it.”

Sekhri went on to speak about the importance of crafting wines of quality and I was transported back to a conversation I had with Boisset last year, during which he also spoke about breaking the rules and insisted he would never make a wine he didn’t love personally.

“All that matters is, can we make a good wine? We must make sure what we put on the table, we can proudly give to our guest,” said Sekhri. “I don’t want to get into this business for an opportunity, consumerism, to try to sell someone something because it’s an opportunity. We should be able to sell them something that we are proud to sell. You should be proud to open that bottle of wine and it should have the essence of terroir, the essence of style.”

Style. Another favorite word of JCB.

It was only a matter of time before a partnership developed. The two fondly recalled pulling an all-night blending session in Sekhri’s cellar, a night that ultimately inspired this collaboration.

“We spent a whole weekend together, blending and tasting the cellar. Six hundred barrels and we knew them all, first name and last name. We pretty much didn’t sleep that night, and we played just by assembling and blending, like people do at home,” said Boisset. “We had an awakening and we said, what about doing this as a venture.”

J’Noon is the first collaboration of its kind to create small production, luxury Indian wines for the global market. Though the portfolio is bound to expand, the first launch features three wines, each produced in just 2,400 bottles: JCB No. 47, a Chardonnay Brut, the 2016 J’Noon White, a blend of Chardonnay and Sauvignon Blanc, and the 2016 J’Noon Red, a blend of Cabernet Sauvignon, co-fermented Petit Verdot and Marcelan, and Sangiovese. The grapes were all grown and harvested from Fratelli estate vineyards in Akluj, Maharashtra, on the right bank of the Nira River.

Having gone in with no expectations, I was delighted to find the wines were approachable, incredibly easy to drink, yet still complex. We sipped them alongside carefully-paired dishes from JCB chef Victor Scargle, who also made a trip to India. He brought back with him “10 pounds of spices,” which he incorporated into the night’s menu. The wines managed to balance out the spices, while still allowing them to sing.

“What we tried to do tonight was the take some wine country and some India and put those together,” said Scargle. “We took all the spices we brought back and tried to create something that represents wine country and India and will showcase the beautiful wines.”

My favorite dish was the papadum of Dungeness crab, with coconut and tamarind, paired with both the JCB No. 47 and J’Noon White. I’d never had crab in a spiced sauce like that — I’m usually just drowning it in a tub of melted butter — and it was positively mind-blowing.

JCB No. 47 joins the JCB Collection of wines, all of which bare a number of significance. In this case, 47 is in honor of the year of India’s independence, 1947.

“We were so proud of it that Kapil sold half of it to all his friends,” Boisset laughed. “Kapil had it with the president of India, the first minister, and the French president had it while in India, just three days after our big release in March.”

Supposedly, we were the first group of Americans to try the wine, which spent 24 months in barrel and bottle.

J’Noon White was a nice treat, for it’s not every day you get to sip a barrel-fermented Chardonnay (60 percent) and Sauvignon Blanc (40 percent) blend. Traditional characteristics of both varieties were present and fused together well on the palate.

Yet it was the J’Noon Red that seemed to induce the most chatter among the writers. Without speaking for them, perhaps we didn’t expect a red wine from India to bring so much gusto to the table and to stand up to the Raymond Estate Lamb dish as well as any California Pinot, and even some Cabernets.

If you want to get your hands on these wines, head to one of JCB’s tasting rooms, where they are available in limited supply.

Based out of the Napa Valley, Melinda Kearney and her daughter, Michèle Lorenza Ouellet, have created a popular Provençal-style rosé wine called Lorenza.

Allison Levine, Please The Palate: Five items getting me through home life

Allison Levine has discovered five things that are adding some joy to spending more time at home.

Allen Balik looks behind the scenes at the creation of a wine brand.

J'Noon is the product of a collaboration between Napa Valley's Jean Charles Boisset and  Kapil Sekhri, proprietor of the Indian wine brand Fratelli Wines.

The J'Noon wines include a red, a white and a sparkling.