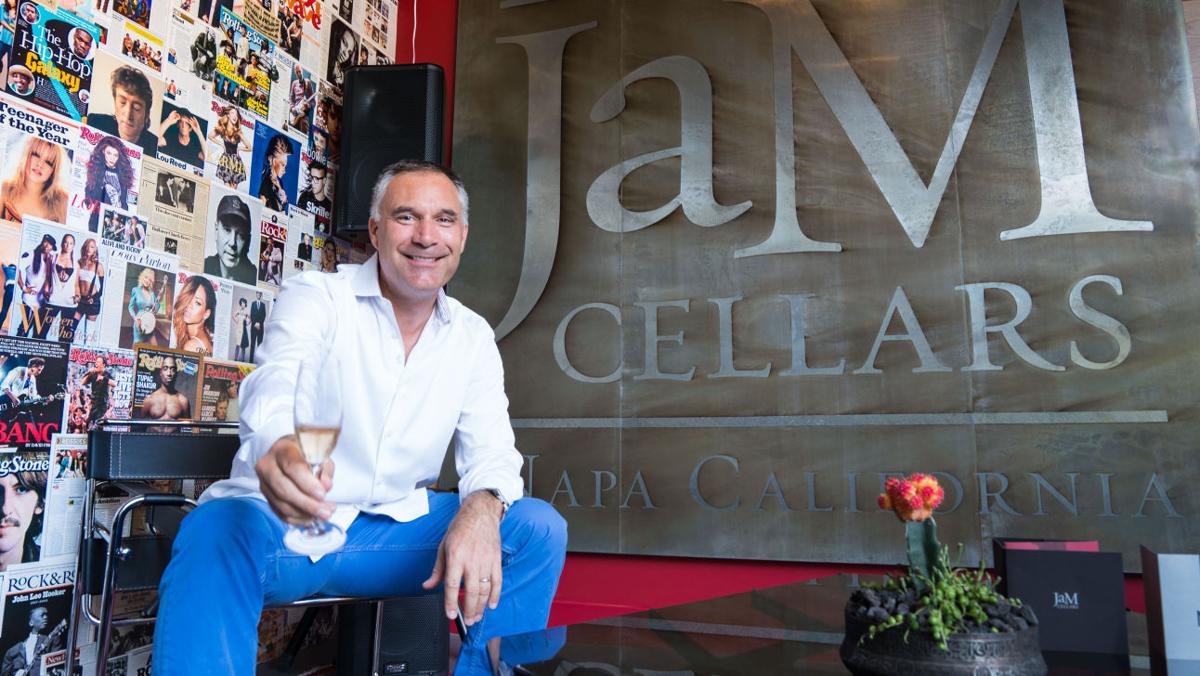 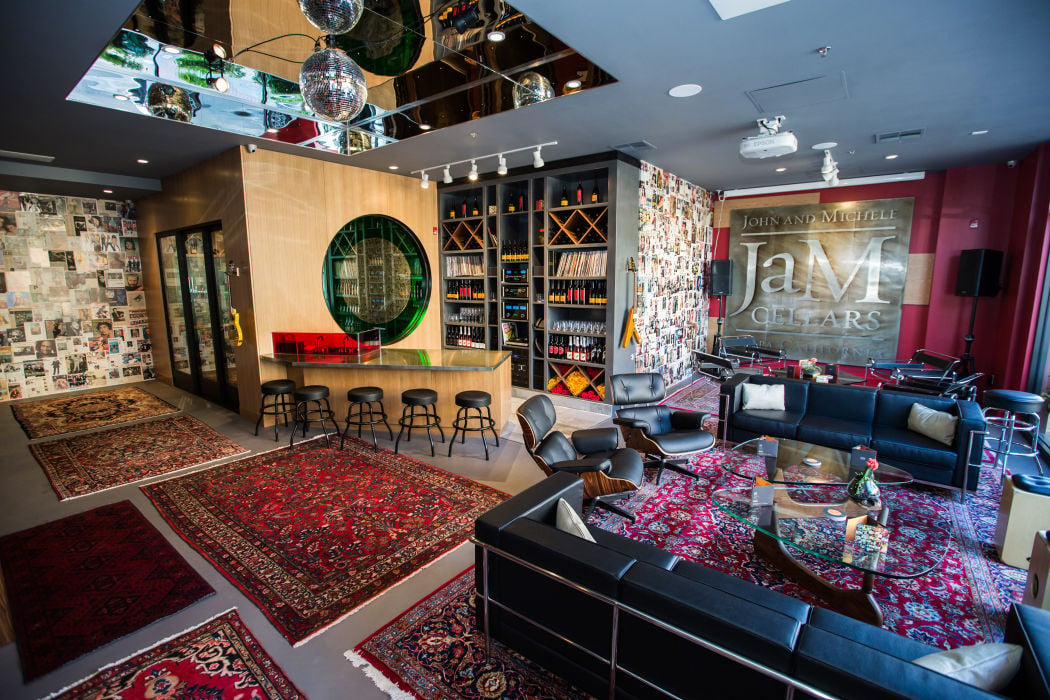 The new JaM Cellars tasting room in downtown Napa is a blend between tasting room and professional musical sound studio where musicians and other artists might be found in recording sessions or hosting podcasts while visitors taste wine or order light fare off the tasting menu. 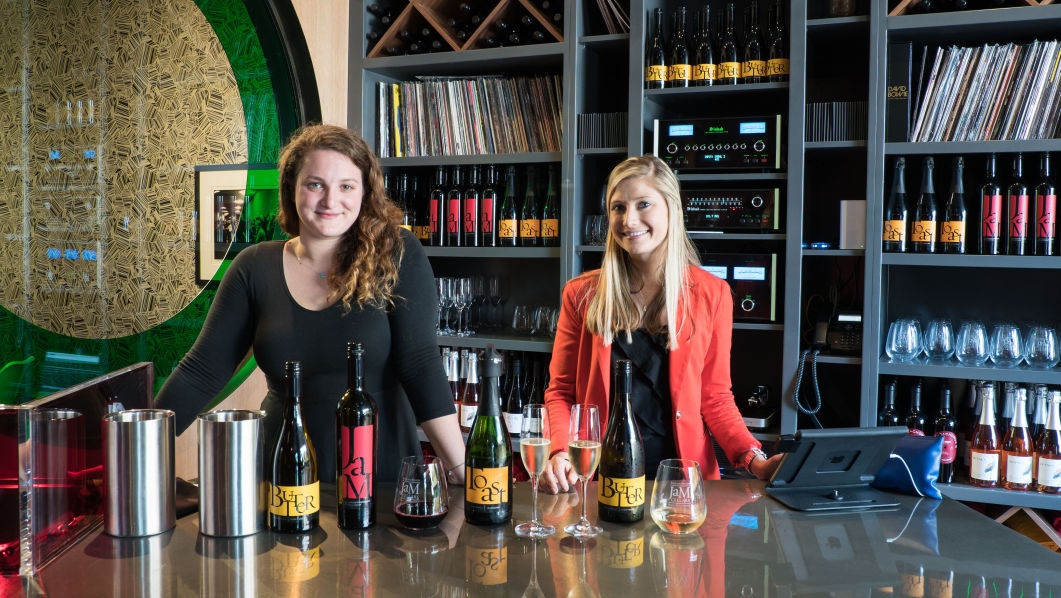 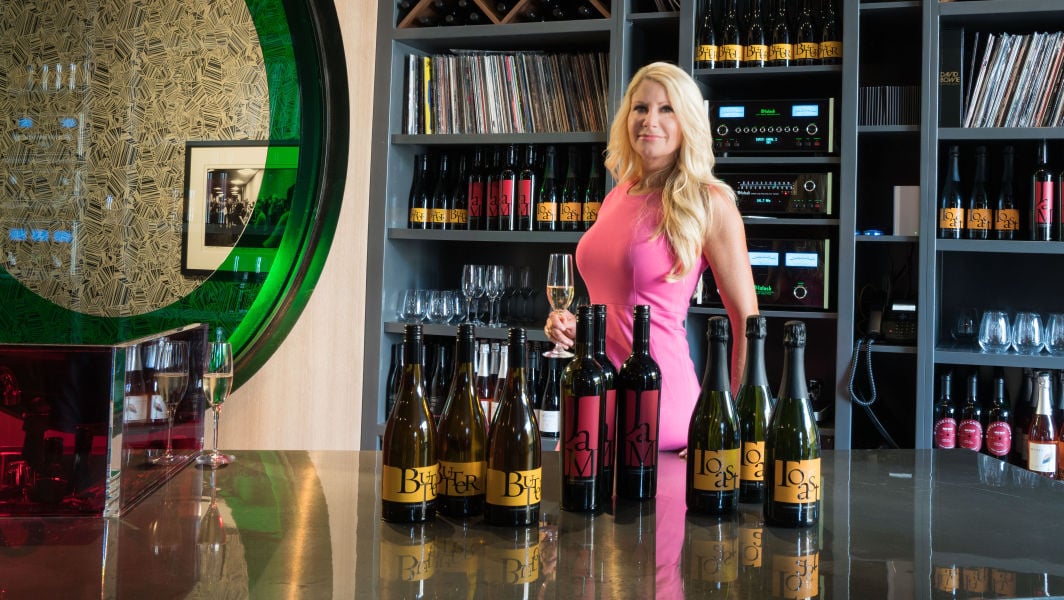 Michele Truchard in the new JaM Cellars tasting room in downtown Napa. Visitors have a range of tasting flights from which to choose, including the popular “Butter” chardonnay or the JaM cabernet sauvignon.

“We’ve created this space for our customers to come in and listen to music and enjoy some wine,” John said during their grand opening celebration. “We started the brand back in 2010 with a JaM cabernet from Napa Valley, and a year later a friend said in jest that we should do a chardonnay and call it ‘butter’ and so we did. And then we added ‘toast,’ which is our sparkling wine.”

John and his wife are no strangers to the valley.

“My folks bought property here in 1974, and my wife is a fourth-generation Napan (her maiden name is Crane),” he said. “From ’74 to ’86, my family lived in Reno, Nevada, and came here for weekends. During that time, I spent a lot of time in the vineyard and learned the grape-growing side of the business with my father. We moved here when I was a sophomore and I finished high school.”

After that, John went away to college, eventually finishing up at UC Davis, where he met his future wife. After college, John started Vinewerkes, a vineyard management business, and for several years focused on caring for other people’s vineyards.

In 1997, he planted his own vineyard, and he and Michele, by then his wife, started the John Anthony Vineyards wine brand in 2003.

Vinewerkes now manages 26 vineyards in the Napa Valley, and John Anthony Vineyards produces about 5,000 cases of wine, whereas JaM Cellars produced more than 500,000 cases in 2015 and are expecting to break 1 million cases in the coming years.

John and Michele also have another product offering that they started a few years back called Farm Napa Valley, which includes a few different wines that John refers to as their modestly priced offering ($25 for chardonnay and $45 for cabernet sauvignon).

JaM’s links to music come from John and Michele’s deep appreciation and love of music and the Napa Valley’s growing presence through the BottleRock music festival.

“Several years ago, we started off sponsoring a small tent at BottleRock, and last year we sponsored the second stage, and this year we are the presenting sponsors,” John said. “So people started associating JaM with music and it just kind of worked.”

Beyond the link to BottleRock, John also has a business that creates wines for various artists, including musicians.

“Ian White and I have a business called JW Thomas, where we do wine projects with musicians like Patrick Carney, Jackopierce, Amy Hanaiali’i Gilliom, Brett Dennen, and Mat Kearney,” John said.

“And so many of those wines are here at the tasting room, too. So then our musician partners asked if they could have a sound room to do podcasts and even record music. And we said, ‘Sure, we can do that.’ So it was kind of like a request. From there, things just took on a life of their own — with turntables, over 800 vinyl records and a sound room — until it became a place that is just as much about music as it is about wine.”

The floors of the tasting room are covered with Asian rugs, while many of the walls are full of rock ’n’ roll paraphernalia, including Rolling Stone magazine covers and guitars. Low leather couches and chairs make for comfortable seating where guests can enjoy wine or light fare off a small menu provided by the adjacent Tarla Mediterranean Bar and Grill.

My tasting included the 2014 Napa Valley JaM cabernet sauvignon and the 2015 Butter, Napa Valley chardonnay. The cabernet ($50 per bottle) was garnet-colored in the glass with aromas of ripe cherries and vanilla bean. In the mouth the wine was modestly rich with flavors of plum and vanilla cola dominating.

The chardonnay ($25) was golden in the glass with aromatics of candied Meyer lemon and coconut-cream pie. In the mouth the wine was rich and slightly sweet with a heavy influence of oak that included a slight bitterness in the finish.

“The best things to pair with our wines are the people you love,” Michele said. “We enjoy making these wines, and opening JaM Cellars in downtown Napa gives us the opportunity to have even more fun sharing them with friends.”

“We love what we’re doing,” added John. “I’ve been blessed my whole life. I’ve had parents that loved me, talked to me and took care of me. My dad taught me what he loved doing in his life. I have a wonderful wife and wonderful children — that’s the richness in our life. As for JaM Cellars, our hope is that people come in here and enjoy our wines with their music and friends. It’s that simple.”

JaM Cellars is located at 1460 First St. in downtown Napa and open Wednesday through Sunday from 10 a.m. to midnight, open until 2 a.m. on Friday and Saturday.

With this change in ownership, the Napa Valley Opera House will be able to increase programs, supporters say.

The new JaM Cellars tasting room in downtown Napa is a blend between tasting room and professional musical sound studio where musicians and other artists might be found in recording sessions or hosting podcasts while visitors taste wine or order light fare off the tasting menu.

Michele Truchard in the new JaM Cellars tasting room in downtown Napa. Visitors have a range of tasting flights from which to choose, including the popular “Butter” chardonnay or the JaM cabernet sauvignon.