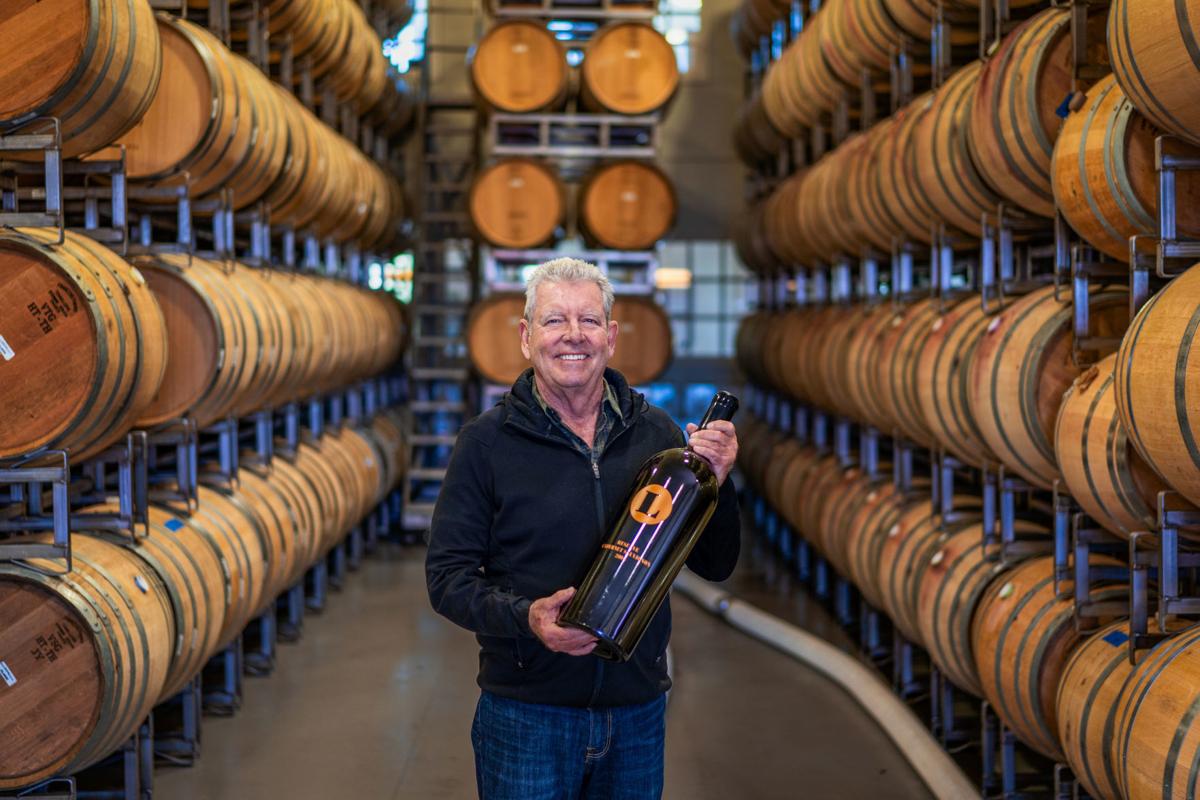 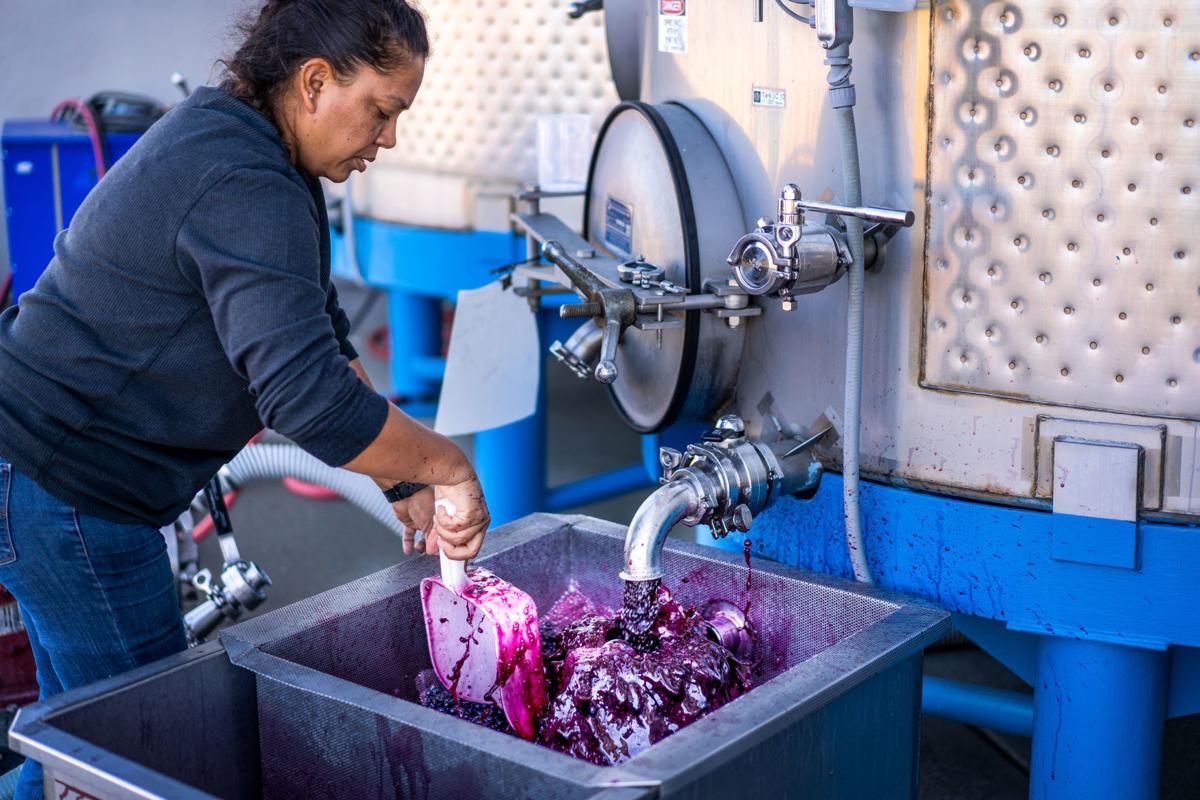 Silvia Ortiz has been working at Lewis Cellars since 1996. 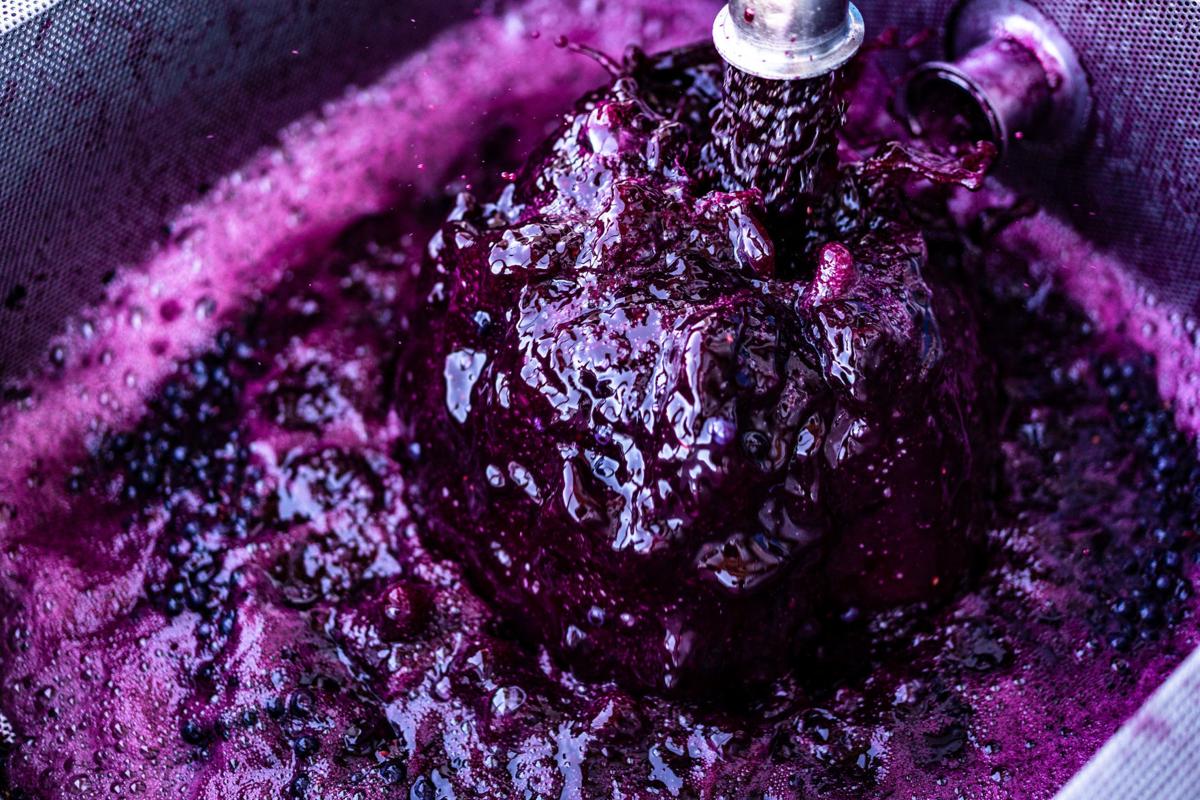 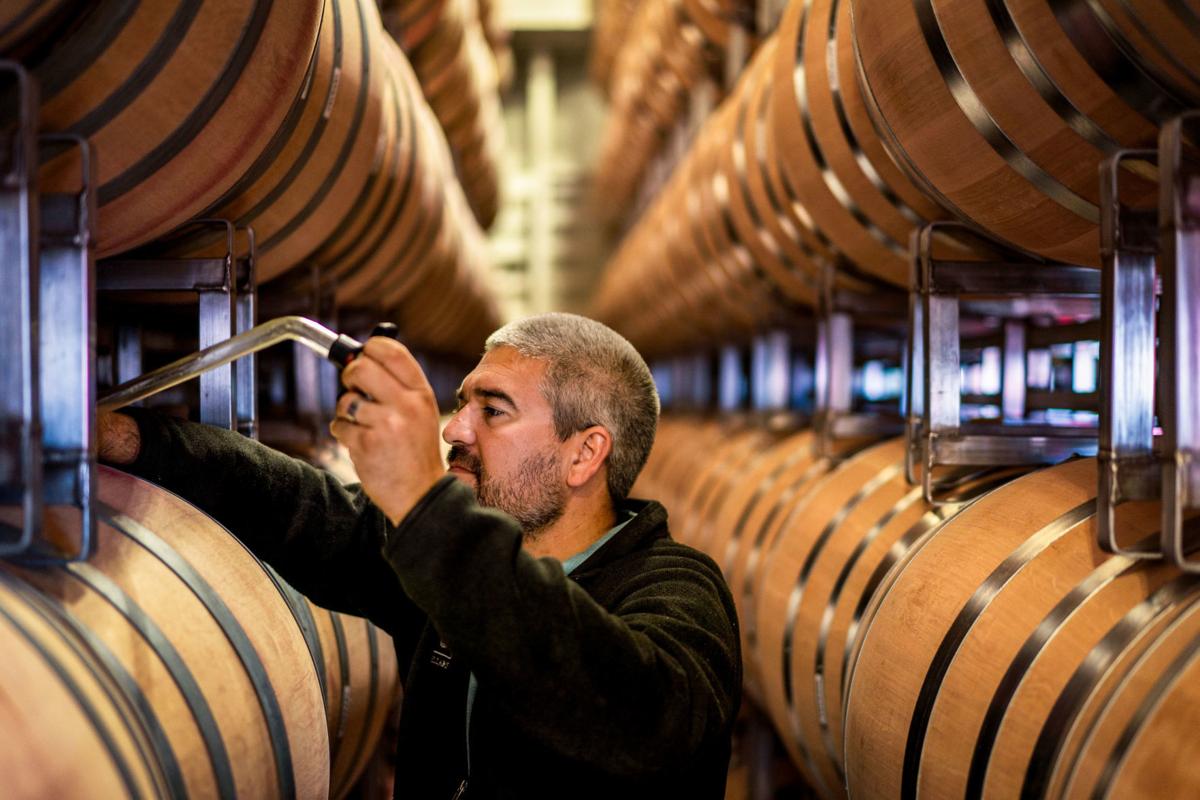 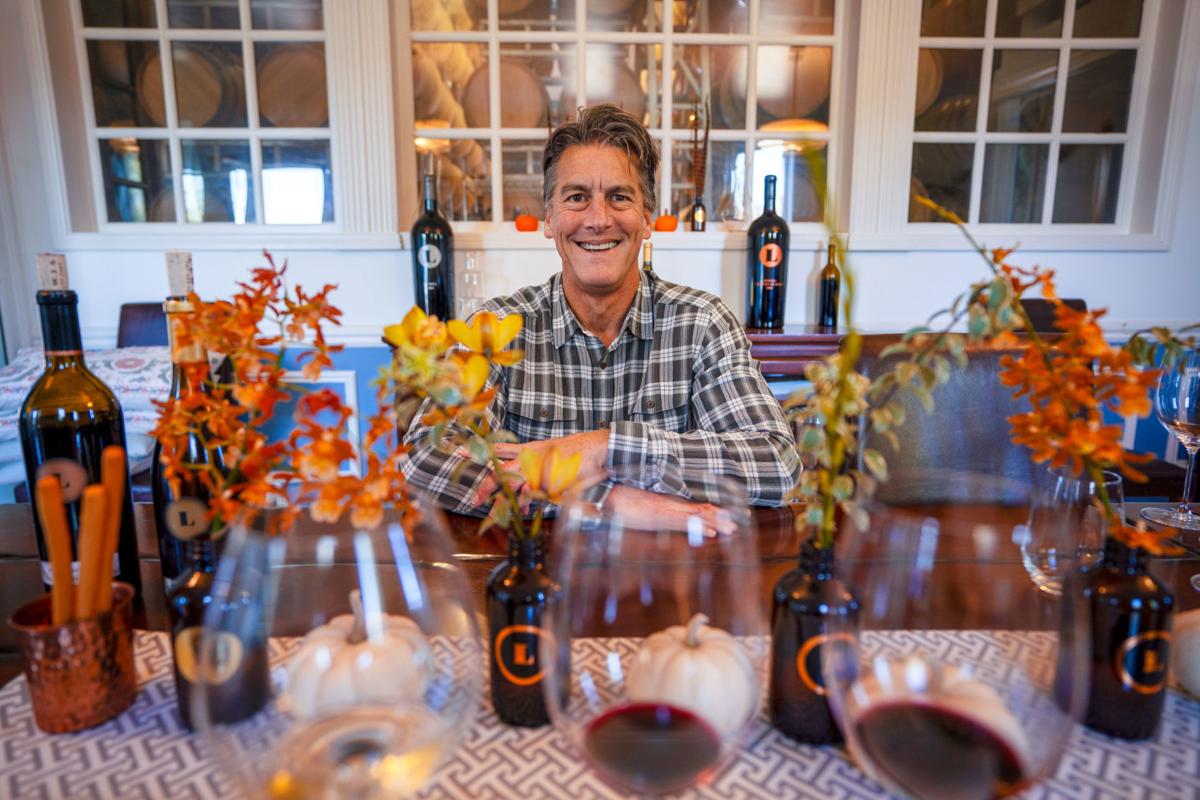 Dennis Bell, Debbie Lewis’ son, started at the winery in 1999 and is now the winery’s president. 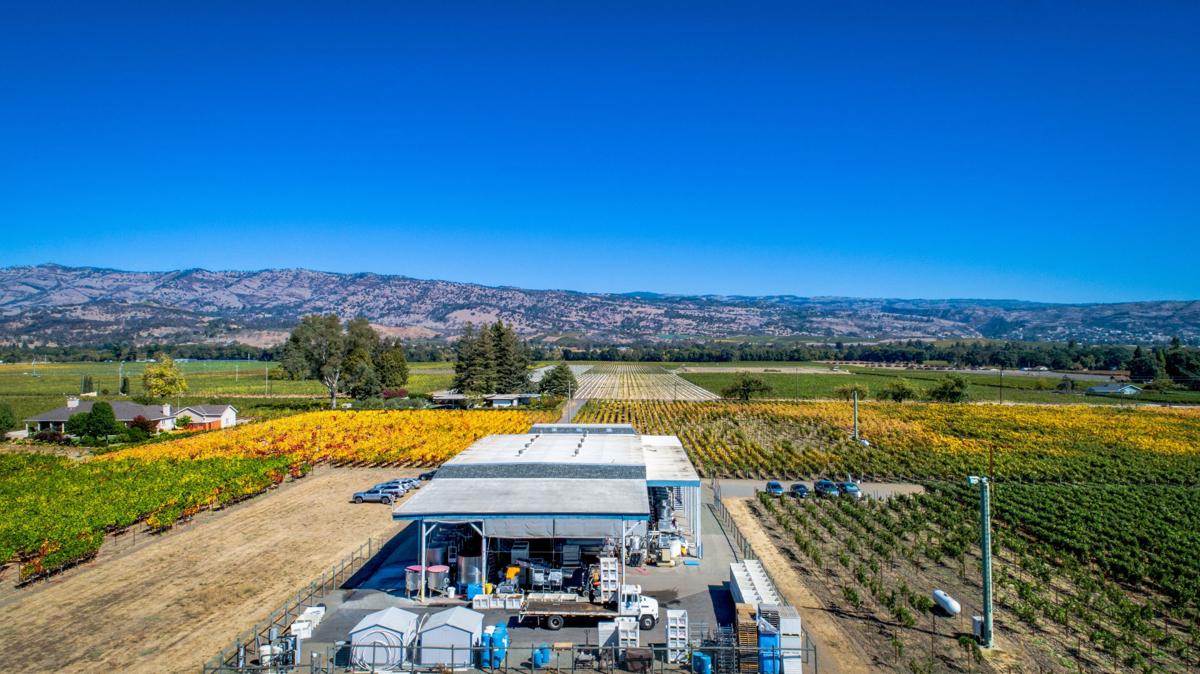 Silvia Ortiz has been working at Lewis Cellars since 1996.

Dennis Bell, Debbie Lewis’ son, started at the winery in 1999 and is now the winery’s president.

Lately, many wineries seem almost apologetic when it comes to making rich-ripe-style Napa Valley wines. But this is not the case with Lewis Cellars, which has celebrated the region’s warm growing conditions by consistently making opulent, full-throttle wines since 1992.

“Our intention is to push the limits,” said Lewis Cellars’ winemaker, Josh Widaman. “Our wines are equal parts the Lewises’ vision of non-compromising, quality-focused wine making and the pure-raw expression of what’s happening in each of the vineyards that we source from.”

Debbie grew up a fifth-generation Californian in the Sacramento delta. She married early, had three sons and managed her family’s farm before falling in love with wine. Eventually she worked at San Francisco’s oldest wine bar, the London Wine Bar, before she met Randy. Sadly, she passed in 2017 after a yearlong battle with cancer.

Randy grew up in Atlanta, Georgia, and studied at Vanderbilt before moving west to finish college at San Jose State before starting an MBA at Berkeley. Initially he thought he might become a doctor, a psychologist or perhaps a businessperson, but in reality he actually dreamed of racing cars.

In 1969, at the age of 24 — which is “way too old” to start driving, according to Lewis — a friend provided a race car and he won his first trophy. From there he quickly rose in the ranks, moving to Europe to drive Formula Three cars in the early 1970s before returning to the United States to drive in the Formula 5000, the Indianapolis 500 and Can Am. During the course of his career he won numerous awards, crashed dozens of times and fell in love with wine.

“I started coming up to the valley and tasting wine when I was at SJ State and then during my time in Europe when I’d stop in little villages and taste wine between races, so I had a lot of exposure and interest in wine, even back then,” he said.

The couple met during a wine tasting in 1978 in which Debbie expressed her belief that Bordeaux blends were undervalued at the time while Randy shared his growing interest in California Zinfandels, such as those from Ridge Vineyards. With their shared passion for wine, the two fell in love and married. Together they ran a successful racing company — Motor Race Marketing — with Randy driving race cars and Debbie running the business.

When Lewis slammed into a wall during a 1991 race, the couple decided to retire one enterprise and begin another. After helping their friend and vintner Bob Miner with his Oakville Ranch Vineyards and Winery, the couple launched their own wine brand.

With a goal of making powerful, yet elegant, wines the Lewises sought help from some of Napa-Valley’s Cabernet gurus, including Robbie Meyer, Paul Hobbs and Helen Turley.

“Helen told us that the key to success was to find the best vineyards and then be patient as the grapes ripen,” Randy said, “only picking the grapes at their peak, when the flavors and tannin texture had reached their zenith.”

Today, Widaman embodies that philosophy, often being the last to pick grapes in the valley.

Widaman grew up in Orange County. His parents — his father a professor of psychology and his mother a connoisseur of food, art and wine — often took their son with them as they searched for hard-to-find wines throughout the state or in Europe, where the family spent many of their summers.

“I actually spent a lot of time around good wine growing up, but I didn’t realize you could actually make a living making wine until halfway through college,” Widaman said. “When I did, I transferred from San Diego State to UC Davis, and for the first year slept on my friend’s couch while I learned that becoming a winemaker was an actual thing.”

By 1999, he was an intern at Stag’s Leap Wine Cellars. After that he worked under winemaker Elizabeth Vianna at Chimney Rock for six years.

“Josh is one of the most talented people I have met,” Vianna said. “Not only does he have a keen understanding of vineyards, he also has a great palate, pays attention to the details and is focused on making great wine. But he’s also a kind and motivating leader who creates a sense of fun around work.”

Vianna, known for her own expressive and voluptuous wines, points to Widaman’s keen interest in vineyards as a key to his success.

“He was trained to get the best from vineyards and is a true vine-to-wine winemaker,” she said.

Widaman also spent time with the winemaking team at Pahlmeyer before becoming winemaker at Lewis Cellars, but Chimney Rock was his big break.

“Elizabeth gave me my first full-time job in the industry,” he said. “She imbued me with a deep respect for wine making, the importance of vineyard management and helped open many doors — I love and respect her like a sister.”

Each year, the family-run Lewis Cellars and their six full-time employees and numerous interns make about 10,000 cases of wine. Most of that comes in the form of Cabernet Sauvignon, but small amounts of Chardonnay, Syrah, Sauvignon Blanc and Merlot are also available.

“In every bottle, we are trying to give the purest expression of what’s possible,” Widaman said. “We don’t fine or filter our wines. It might remove some of the rougher edges, but by doing so you also lose some of what’s good.”

This wallop of a Chardonnay is gold colored in the glass and was made by pressing whole clusters of grapes, barrel fermented and then aged sur-lies style with bâtonnage (stirring the sediment occasionally to gain richness and complexity) in 100% French oak for 11 to 15 months, undergoing 100% malolactic fermentation before being bottled. Smell and taste this wine as a classic example of the best of Napa Valley Chardonnays. Baked pear, praline, butterscotch, pineapple upside down cake, lychee syrup, candied lemon rind and toasted hazelnut accompany an unctuous, lasting mouth feel that calls for another sip.

The Lewis Cellar Merlot is like some of the best Merlots from the Napa Valley — Pride Mountain, Hourglass, Paloma, Switchback Ridge, Emmolo and Cakebread. Full of mocha, chocolate-covered blueberries, vanilla toffee and espresso beans, this is a wine that you initially plan to share with friends, but then on second thought you probably decide to enjoy it on your own over the course of a few days — just for research, mind you.

The Napa Valley Cabernet is a blend of grapes from vineyards primarily on the eastern side of the valley. It is dense ruby-colored in the glass with silky tannins and aromas of blackberry cobbler, black currant, licorice, coconut cream, cigar smoke and lavish oak vanilla with a finish that persists for nearly two minutes. Like all the Lewis wines, this one is a pleasant reminder of why the Napa Valley has so many Cab fans.

In 2016, Lewis Cellars was awarded the Wine Spectator’s No. 1 Wine of the Year for their Cabernet Sauvignons. The magazine noted that, “The Lewises share a passion for rich, powerful New World wines, [in] an opulent style that suits the profile of Napa Valley–grown grapes.”

When they won the award, Debbie was still active in the winery, helping run the business but also hoping that her son (Dennis Bell, the winery president) and her grandson (Alec, still in college) would carry on the tradition of making bold, expressive wines.

“The future is tied to the past for us, especially as it relates to Debbie Lewis,” Widaman said. “I got a chance to work four vintages with her, but she was — and remains — such a big part of this winery. Without her, none of this would be here and it’s our job to continue the legacy of pushing the boundaries and being at the forefront of Napa Valley winemaking, while always honoring what she and Randy started.”