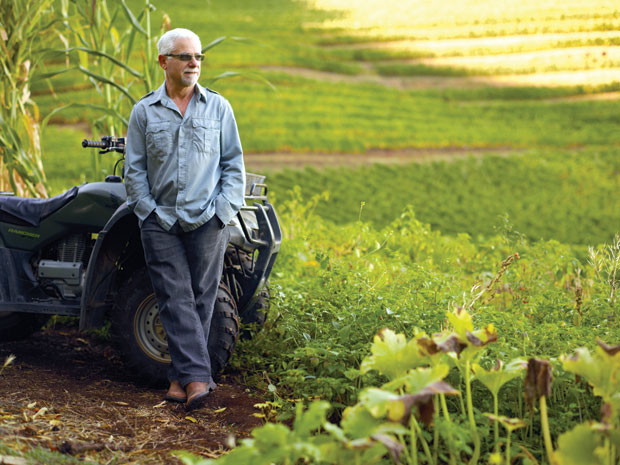 A native of Douro Valley in Portugal, Manuel Pires launched Gandona Estate wines this year after running a successful business with his brother back East. Submitted photos 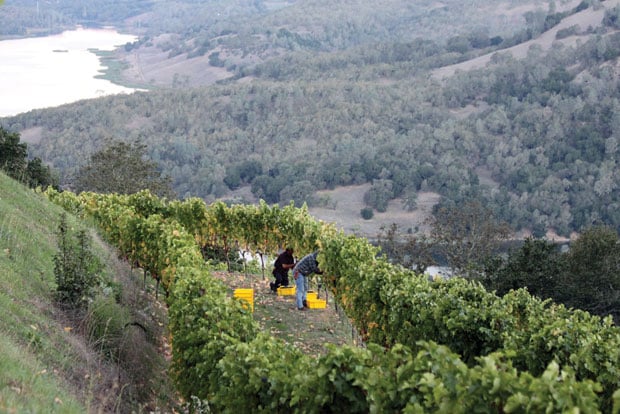 A morning harvest last fall is captured on the slopes of Pritchard Hill overlooking Lake Hennessey. This is one of the sites sourced for Gandona Estates wines. 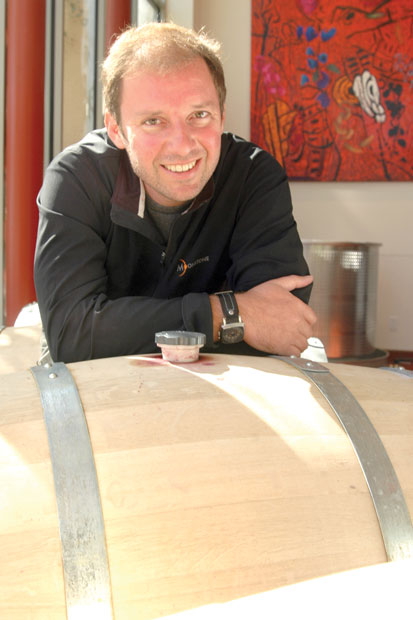 Napa Valley winemaker Philippe Melka is in charge of the new Gandona Estate cellar, releasing its first wines from the 2009 harvest this month. He is also making a Port-style wine for owners Manuel and Cristina Pires. Submitted photos

The new Gandona Estate winery was carved into and built on Pritchard Hill. Construction was completed last December, and it was recently opened for a celebration of the inaugural release of the new brand’s wines.

A native of Douro Valley in Portugal, Manuel Pires launched Gandona Estate wines this year after running a successful business with his brother back East. Submitted photos

A morning harvest last fall is captured on the slopes of Pritchard Hill overlooking Lake Hennessey. This is one of the sites sourced for Gandona Estates wines.

Napa Valley winemaker Philippe Melka is in charge of the new Gandona Estate cellar, releasing its first wines from the 2009 harvest this month. He is also making a Port-style wine for owners Manuel and Cristina Pires. Submitted photos

The new Gandona Estate winery was carved into and built on Pritchard Hill. Construction was completed last December, and it was recently opened for a celebration of the inaugural release of the new brand’s wines.

Manuel Pires is guided by his past.

As he beams about the release of his first Napa Valley wine, Pires is quick to note the inspiration for this new lot in life was his beloved grandfather — a man neighbors in a small Portuguese town called “gandona.”

“People liked him a lot,” the new Pritchard Hill vintner recalled as he poured a few visitors the first wine from the 116-acre estate he and his wife, Cristina, purchased six years ago. “My grandfather was known to villagers as a man of compassion and kindness.”

Although he might have been more well off than most, “My grandfather earned a reputation for his kind deeds and loaning money to those in need. He was nicknamed Gandona, which in English translates loosely to ‘humble man’.”

Growing up, Pires spent summers on his grandfather’s farm in the Douro Valley, near Macores, some seven miles from the Spanish border. He remembers that classes couldn’t end fast enough so days could be planned around his grandfather’s daily regimen.

“The farm was named Quinta Fraga do Arco after the unique arched rock formation that has graced the property since prehistoric times,” Pires continued. “He grew grapes, almonds, olives and chestnuts, which were sold to nearby villages. He also made some wine at home.”

Before he became his town’s “gandona,” Pires’ grandfather sought his fortune in the New World, immigrating to Rhode Island around 1912. But during the early years of the Great Depression, he returned to his native country, Pires said. “We think that was about 1920.”

Then, he established the family farm where he raised a family, Pires said. “Some of the original vineyards still exist, maybe six acres.” Red table wine and a little white wine is made from indigenous grape varieties today.

On his winery website, Pires speaks to the allure of his grandfather’s farm, which stays with him today. “The Quinta’s rolling hillsides were covered in vegetation that became fragrant and aromatic with the warmth of the sun, and the surrounding countryside was a patchwork of crops from neighboring Quintas framed by the curves of mountains.”

No wonder he searched for a hilllside tract when he and his wife decided to look for property in the Napa Valley.

Pires talks about his dreams as a young man. “I knew a time would come when I would want to work on the land ... (because) I have such great memories of being with my grandfather in the vineyard. Today, a cousin is one of the largest producers in the Douro — and now 40 years later I have returned to the vineyard.”

Starting in 2000, he and his wife came to the valley a couple of times a year in search of the ideal site for their new business venture.

“It took us three years to find the location for Gandona Estate,” Pires said. “We narrowed our search to Napa Valley where the terrain is similar to the Douro region of Portugal where both Cristina and I were raised. We were so happy when we found this place on Pritchard Hill.”

The legacy of Pritchard Hill began in the 1870s when Charles Pritchard established a homestead on the top of the now-famous knoll and planted grapevines. His success led to continued vine propagation on the hill and earned the area the nickname, Pritchard Hill.

The tract Manuel and Cristina chose had its beginnings a century and a half ago when, in 1862, Daniel K. Dille homesteaded the property, located just downhill from Pritchard’s future home, they pointed out. Miners eager to find gold and silver — and locally quicksilver — flocked to California in the prior decade, and Napa County had recently been established. Dille worked as a laborer and maintained the land.

The property sold several times over the years until Bob Long purchased it in 1966 and planted the site’s first vineyard. A decade later, the family entered the wine business in earnest, launching a small winery called Long Vineyards producing chardonnay, cabernet sauvignon and a late harvest Johannisberg riesling.

In its current model, Gandona Estate is a 116-acre winegrape growing property perched on the steep northwest slope of Pritchard Hill, ranging from 900 to 1,100 feet in elevation. The site is home to four vineyards and a newly built winery and 4,000 square-foot cave complex, completed last December. Portuguese in design, the Gandona winery was constructed using recycled wood and stone from the property. Calçada Portuguesa, a zig-zag pattern of tiles, has been used in both outdoor and indoor tasting and reception areas.

“Bob Long had a total of 15 acres planted (to grapevines); 14 in chardonnay, one in cabernet sauvignon,” Pires said. “Because we wanted to produce a fine cabernet, that’s now reversed.’

With just over 17 acres in vines, the breakdown is a little over 13 acres of cabernet sauvignon, one acre each of petit verdot, cabernet franc and chardonnay, plus a half-acre each of merlot and Touriga Nacional, the latter a grape for traditional Port wine.

Pires asked a couple of industry professionals to help him with the new Gandona wine project. Well known viticulturist Jim Barbour oversees vineyard operations, while the winemaking effort is in the capable hands of respected vintner Philippe Melka. The day-to-day cellar operation is overseen by Jason Phillips.

The first wines to be released by Pires’ Gandona Estate are from the 2009 harvest — 125 cases of lush, ripe cabernet sauvignon, and a second cabernet blend, Encosta (which translates to “slope”), of which 150 cases were produced. The latter wine comes from fruit grown on the terraced rows of the estate.

The 2009 Gandona cabernet sauvignon is a softly textured mouthful of blue and black fruit — a wine of great depth that drinks well today but will surely develop even more complexity with bottle aging in the cellar. A beautiful expression of hillside fruit, the Encosta is drinking well now. It, too, has a steely backbone.

A Port-style wine from the 2010 harvest of Touriga Nacional is in the cellar at present, with a planned release some three to five years down the pike. Mother Nature last year put the kibosh on plans for chardonnay, but Pires hopes to have one from this growing season.

Manuel Pires isn’t the only member of the family with dreams. His father was also a goal-oriented dreamer, and that dream was to take his family to the United States.

The third child of the Douro “gandona,” the senior Pires, realized his dream in 1969 when he came to stay with his sister in Waterbury, Conn. Manuel said a death in the immediate family — that of his younger sister — precipitated the move. Two years passed before Manuel, brother Fernando and his mother made the move to Connecticut.

The two Pires brothers not only graduated from high school but spent some of those years in the work force. By the time he was a high school junior, Manuel says he realized “money didn’t grow on trees. So I vowed that I would be a millionaire by the age of 21. That American dream came true.”

He’d worked for a watch repair and manufacturing firm since his high school days. But two years after graduation, in 1977, the company went through a tough patch and filed for bankruptcy, Pires recounted. The only people left on the payroll were the firm’s president, vice president and Manuel Pires.

The summer of that year Pires traveled to Portugal to see his family. He placed calls to the company’s principals on several occasions only to learn that no one was interested in taking over the operation.

Pires returned home to see a bank auctioning off the company’s assets. “I bought some of them and some other equipment and started my own company, specializing in electronic and digital watches,” he added.

In 1983, Pires took over the Morse Watchmans company, and here in 1985, he and his brother, Fernando, introduced an electronic microprocessing unit for the Nightwatchman’s program.

Less than a decade later, they’d captured 40 percent of the commercial market with their innovative Nightwatchman’s system. In 1994, they brought the electronic key control system to the table — a system that keeps track of sensitive keys. Their primary customers were those in the gaming industry, educational institutions and in corrections.

“Our clients are casinos all over the world, stretching from Macao to Dubai,” Pires said. “We also supply keys for the control rooms of companies in the security business, mostly protecting businesses and homes. Morse Watchmans is the security industry’s leading provider of key control, key security and key and asset management solutions.”

While Manuel and Cristina Pires still have a home in Connecticut, their primary residence is in Napa Valley, where their son just graduated from Justin-Siena High School.

“I still spend a lot of time in Connecticut but I’m not involved in the day-to-day operation of the (Morse Watchmans) business,” Pires said. He has two grown daughters and now a son who’s about to enter college.

“I have the best of both worlds,” he added with a broad grin. “I am living my dream.”