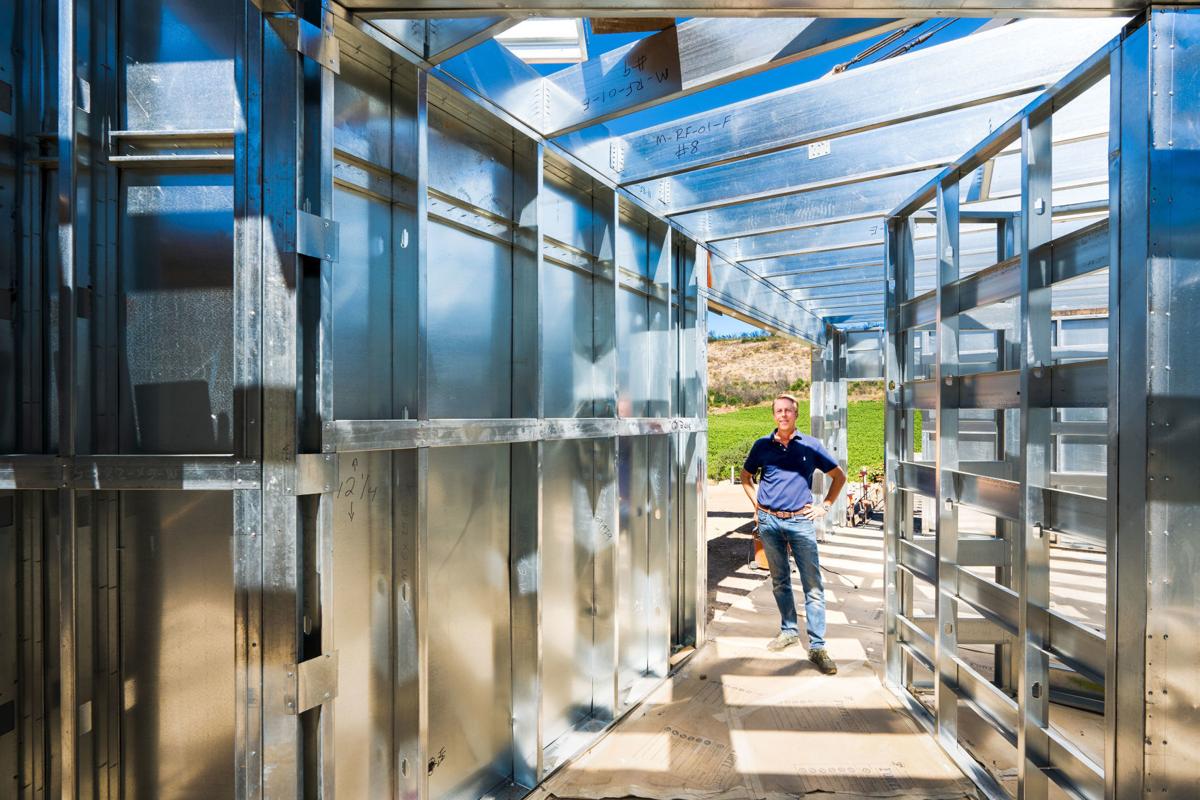 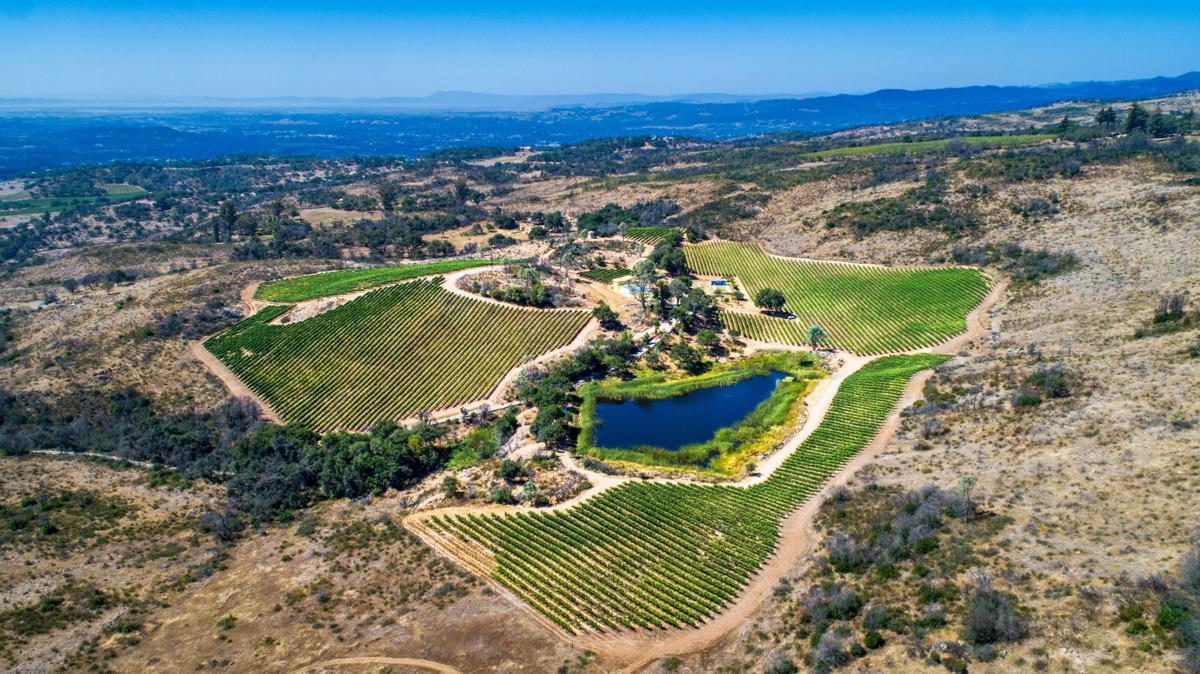 An aerial view of Hesperian’s 1,400-foot elevation vineyard located in the Atlas Peak AVA that looks over the Napa Valley. Philippe Langner, the owner, named the vineyard Kitoko, or “beautiful,” from the Congolese-Lingala language spoken in Zaire, where he spent much of his youth. 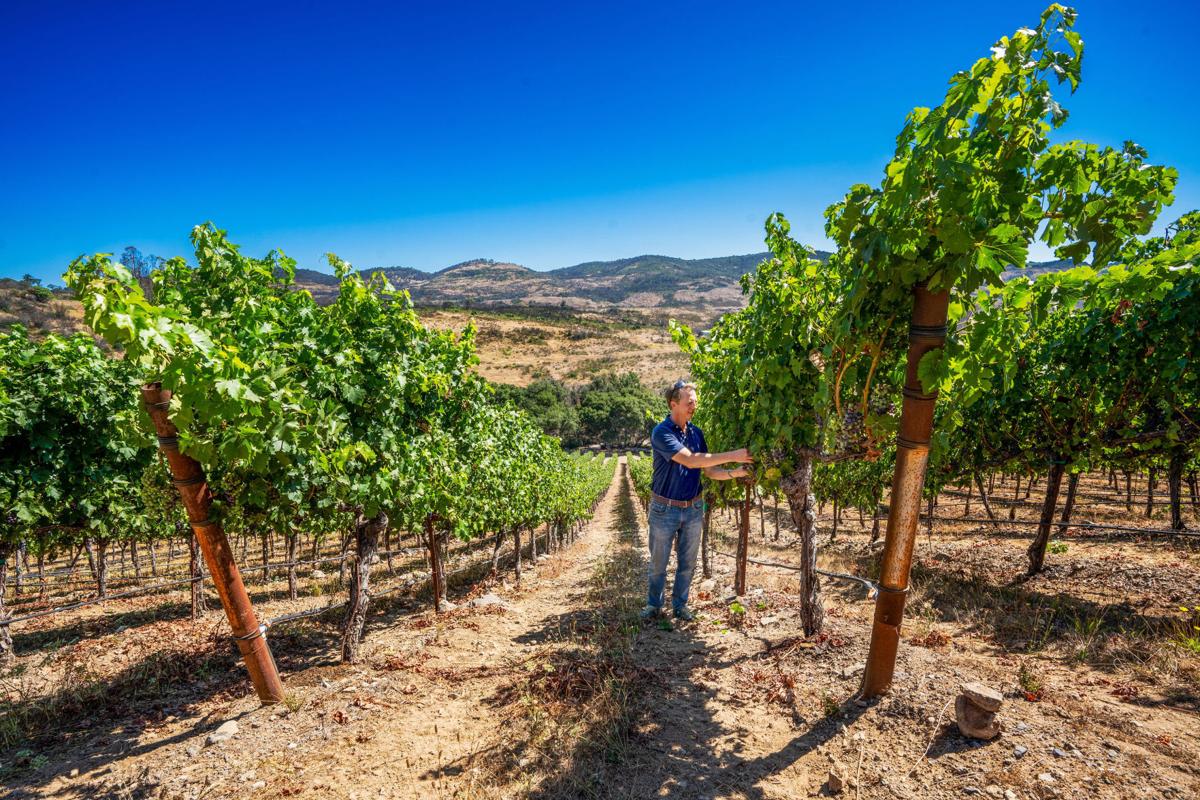 The well-traveled Philippe Langner in his Napa Valley vineyards.

An aerial view of Hesperian’s 1,400-foot elevation vineyard located in the Atlas Peak AVA that looks over the Napa Valley. Philippe Langner, the owner, named the vineyard Kitoko, or “beautiful,” from the Congolese-Lingala language spoken in Zaire, where he spent much of his youth.

The well-traveled Philippe Langner in his Napa Valley vineyards.

Many believe that the first “Judgment of Paris” was a wine event held in 1976 that put Napa Valley wines on the world stage. But that’s not the case. The phrase was first used thousands of years ago.

In ancient Greek mythology, the Hesperides were nymphs who tended queen-god Hera’s westernmost garden. A tree grew within the garden that produced golden apples, one of which the goddess of discord, Eris, gave as a wedding gift. The result was the original Judgement of Paris, which set in motion what eventually became the 10-year Trojan War that Homer chronicled in “The Iliad” around 750 B.C.E.

Since then, the word Hesperian has morphed to mean anyone living in the West, but it can also refer to the western evening “star,” Venus. But for Philippe Langner, owner of Napa Valley’s Hesperian winery and vineyards, the word means something more.

“Hesperian is not a place, it’s an idea,” Langner said. “It’s about crafting something beautiful, complex and individual. Over time my ideas about winemaking have changed. Whereas I once looked to power and intensity, I now look for sensitivity, precision and delicacy as a way to best express our vineyards’ particular personalities.”

To say that Langner is well-traveled is an understatement. He was born in El Salvador, grew up on family ranches in Zaire (cattle, pisciculture and citrus) and Colombia (cattle) and moved to Switzerland when he was 16 to finish school. Next, he headed to the United States, where he attended UC Davis, graduating with a double master’s in agronomy and agricultural economics. As a result of his nomadic life and the heritage of his German father and Parisian mother, Langner now speaks French, Italian, Spanish and German in addition to English and at least a little Congolese-Lingala, a language spoken in Zaire.

After school, Langner moved to France, where he worked for La Compagnie Financière Edmond de Rothschild Banque in Paris. But he found city life constraining and longed to feel the earth beneath his feet again. On a recommendation from his sister, Ariane — who is married to Benjamin Rothschild, a son of Baron Edmond Rothschild — Langner headed to Bordeaux to spend a “short time” working at Château Clarke in Listrac-Médoc. The chateau has been owned by a part of the Rothschild banking family since 1973.

Once there, Langner felt at home, and he extended his stay for five years as he learned the life of a vigneron and winemaker, training under luminaries such as Jacques Boissenot and Michel Rolland before heading to South Africa and the Fredericksburg Winery (Rupert & Rothschild Vignerons) winery for a year.

In 2001, Langner spent a vacation in the Napa Valley. There, he thought he’d visit wineries, take in the sights, and indulge in good food and wine. Never did he guess that he would become so smitten that he’d make it his permanent home.

“I’ve been to some wonderful places on this earth,” he said, “but there’s just something about the Napa Valley.”

After a friend introduced him to the Sullivan family in Rutherford they hired him in 2002 and he eventually became their viticulturist and winemaker. By 2010, he had started his own brand and taken on other clients as their winemaking consultant. He purchased a home and a 14-acre vineyard in the rocky eastern hills above the city of Napa in an area called Atlas Peak.

Although Langner obtains grapes from a variety of different vineyards throughout the region, he has a particular love for his Atlas Peak vineyard.

“I named this vineyard Kitoko, which is the Congolese-Lingala word for ‘beautiful,’” he said. “The name is apropos because the wine that comes from the Kitoko vineyard is perfumed and complex yet more nuanced and subtle than you might expect from grapevines growing in such rugged conditions. It’s basically a pile of rocks up here, which forces the vines to struggle, only producing limited amounts of concentrated fruit per vine.”

During a tour of his vineyard ranch, he talked about his winemaking approach and his plans for the future. He said then that he had lost his home in the 2017 fires. Up until that point, his laughter had been loud and often, but as we approached where his home had once stood he became quiet and hesitant. In front of us a lattice of shiny metal beams formed the skeleton of what would become his new house, its silvery bones glinting in the sun.

He’d lost his home, the barns and the tool sheds, and the fire was so hot and fierce that even a few acres of vineyard had succumbed to the relentless heat.

“I lost nearly everything,” he said, his voice tight. “Fortunately I make the wines off-site at a facility in the valley, so the wines were OK, but other than that…”

He waved his arms to indicate that the flames had consumed almost everything else.

“I even lost my winemaking notes that I had kept on every wine I’d ever tasted — poof, gone,” he said. “I’m rebuilding in such a way that that will never happen again.”

Langner is building with metal and plenty of fire protection — a 2-inch water pipe around the entire house that can soak it when needed. He is also building his winery within caves for both protection and energy conservation.

But rebuilding has taken much longer than he’d imagined and has cost at least twice as much as he expected.

“I feel compelled to rebuild, but it’s not easy,” he said. “It’s not only the time and money, but when the winds came up again this year during harvest I was honestly surprised by my reaction — I felt panicked. It felt as if I needed to harvest the grapes before a fire destroys them again.”

Luckily, there were no fires in Atlas Peak in 2019, but the memory of the terror in 2017 lingers. This might be especially true for residents of Atlas Peak, where six residents perished, hundreds of structures were burned to the ground, thousands of acres lay scorched, and nine wineries were damaged or destroyed. And yet, even with the trauma and devastation, the small community is slowly returning, with vintners such as Langner determined to push forward, believing that Atlas Peak and its nearby neighbors on Prichard Hill produce some of the finest wines of the region.

The wines of Philippe Langner

The Kitoko is opaque with a brick-red rim. Aromatics of red-cherry liqueur, herb-roasted mushrooms, Morbier cheese, Chinese five spice and mulled wine coupled with silken-but-ever-present tannins reminded me of Lynch Bages with its wonderful acidity and balance that produces an elegant structure and a lingering, memorable finish.

The Hesperian Napa Valley is sourced from grapes grown in vineyards on the valley’s floor and has a distinctly different mouthfeel — plush and uncoiled — and yet it strangely has many of the similar aromatic nuances as the Kitoko in a sort of herb-roasted-meat quality. But these aromatics are not merged with a red-fruit core as in the Kitoko, instead this wine leans toward the darker side with licorice, sun-warm plum, dark-roasted coffee and a wonderful creamy cinnamon-toast finish.

Anatomy is a simpler, but still lovely, wine that would make any fan of Beringer Knights Valley Reserve Cabernet Sauvignon sit up and take notice. Aromas of fig, clove and lavender join flavors of black cherry and huckleberries with a finish of black olive, wild sage and mocha chocolate. This is a more consumer-friendly version of Langner’s wine perhaps, but it retains the elegance found in the more expensive alternatives.

To taste the wines, we’d come to a wooden picnic table on the bank of a pond that was surrounded by vineyards that sloped skyward. The only sounds were our voices, the occasional cry of a hawk and the light breeze that rustled through the reeds that lined the shore.

“This place is worth the effort,” he said. “There is so much more to learn, so much to do.”

He then paused and grew silent and serious as he slowly put both hands on the table as if bracing himself. He then leaned his head back and looked up at the sky. It wasn’t clear if he was looking for divine guidance or checking the sky for smoke before lowering his gaze.

“We have a lot of work ahead of us, but this is important,” he said and then let out a long breath, shaking his head slightly.

Until the winery is ready for visitors (sometime in 2022-23) anyone who is interested can book a tasting of Hesperian wines at the Kitchen Collective located at 1650 Soscol Ave., or find the wine at Backroom Wines in Napa and V Wine Cellars in Yountville. For more information or to purchase wine, visit www.hesperianwines.com.