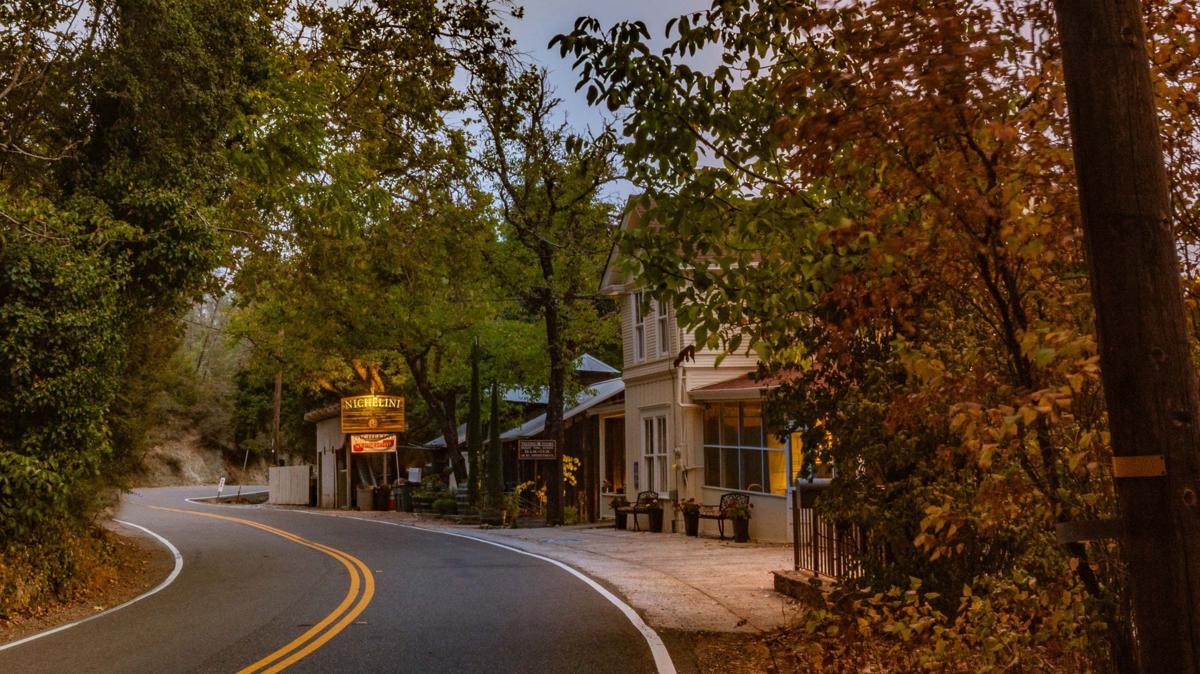 Inches off Highway 128 in the hills above Rutherford, the original 1895 Nichelini hand-hewn stone winery is just below the seven-bedroom house above that provided a home for their 12 children. 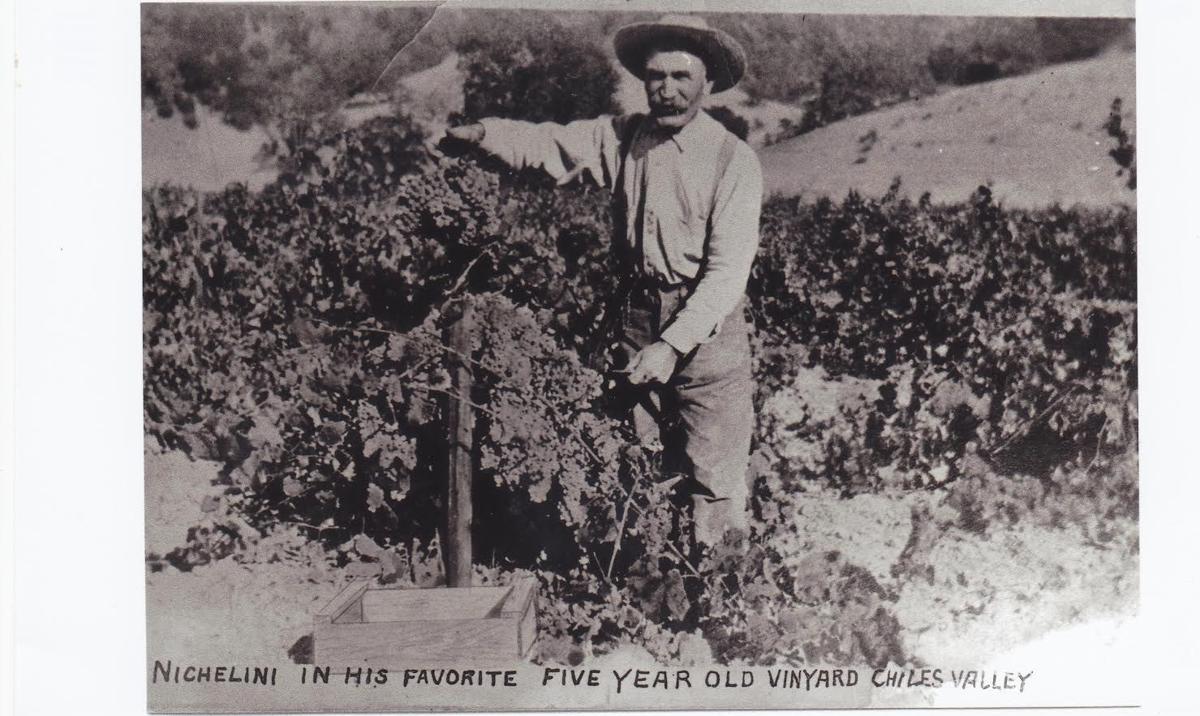 Anton Nichelini was photographed on Oct 10, 1928, in his Alicante Bouche vineyard in Chiles Valley, during Prohibition. 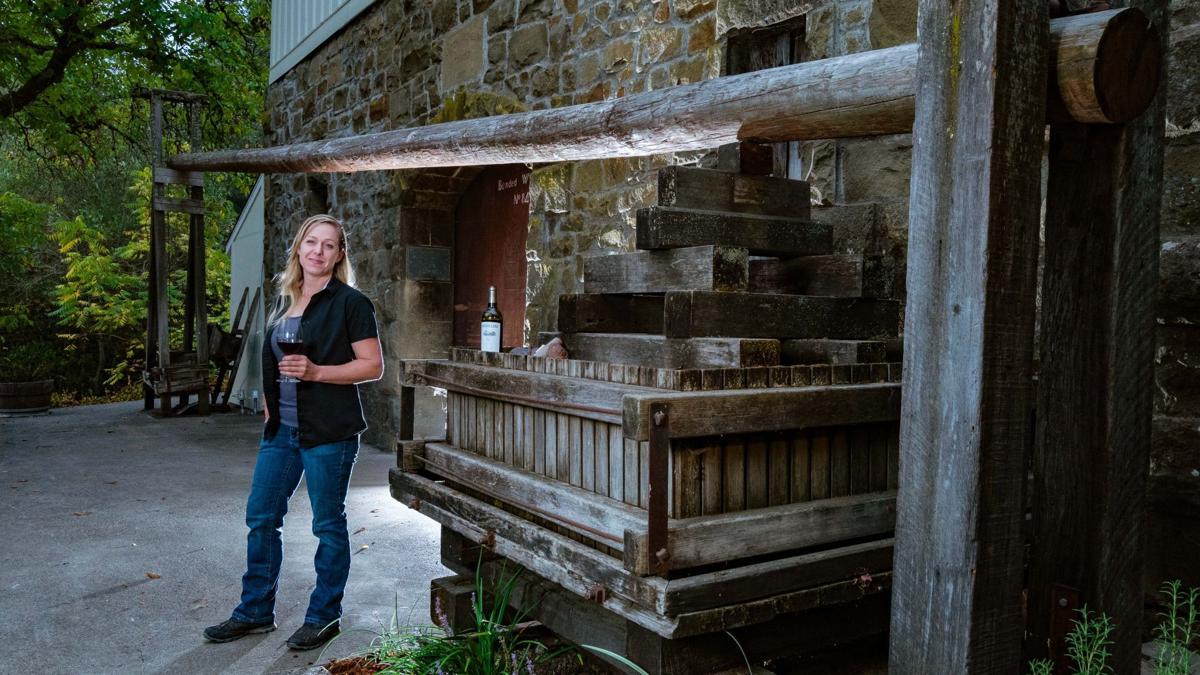 A fifth-generation winemaker, Aimée Sunseri is a direct descendant of the founders of Nichelini Winery. She is also the seventh consecutive family winemaker at the winery, here standing in front of one of only a few remaining Roman wine presses in the state.

Finding the rare, unique and authentic is what many visitors to the Napa Valley long for, and they are sure to find it along Highway 128 in the eastern hills of the Napa Valley at Nichelini Winery.

According to the president of the winery and fourth-generation descendant of the winery’s founder, Doug Patterson, Nichelini Winery is the oldest family-owned and-operated winery in Napa County, this year celebrating their 126th harvest.

“In 1884, traveling on horseback, my great-great-grandparents, Anton and Caterina Nichelini, became the first Swiss settlers in Napa County’s Chiles Valley,” said Patterson. “Once they arrived they planted vines, and four years later they’d had their first harvest. Since then the family have harvested grapes every year, with one of the family members making the wine.”

By 1895, the Nichelinis had constructed a hand-hewn stone winery with a seven-bedroom house above it that provided a home for the 12 children they would eventually have. The winery, original Roman wine press and house still stand today.

The Nichelini property is located in the Napa Valley’s Vaca Mountains, 11 miles east of Rutherford in the Chiles Valley appellation.

If you have ever driven from St. Helena to Sacramento or gone to Lake Berryessa you probably passed the old winery as you twisted along an especially narrow section of Highway 128.

And, if you are like me, every time you passed the old buildings you felt both intrigued and charmed by the yellow clapboard house, rough-stone winery and small wooden Nichelini Winery sign, each so modest and unassuming that I hesitated to stop, imagining that I might be interrupting a family gathered to eat lunch and drink wine at long wooden tables covered with red-and-white checkerboard tablecloths.

Those adventurous enough to stop will be rewarded with a wine experience that is unheard of in modern-day Napa Valley: a fifth-generation winemaker, Aimée Sunseri, who is a direct descendant of the founders and is also the seventh consecutive family winemaker, starting with her great-great-grandfather, Anton Nichelini in 1890.

“Our family has a great American story,” said Sunseri. “Growing up, I was always proud that there was a winery built by my great-great-grandparents that was still being operated by family. Not everyone has that connection to a place. Especially around here.”

Beyond learning winemaking from her family, Sunseri received her formal education at UC Davis in viticulture and enology. She became head winemaker in 2009 and personifies the winery’s motto, “Generation to Generation,” with her wines showcasing a wonderful authentic flair that is in welcome contrast to many of the slicker wines made from only a few miles away.

“Our old-fashioned attention to detail is complemented by our investment in the latest winemaking and processing equipment and the technical rigor and artistry of Aimée,” said Patterson.

Beyond owning one of the last remaining Roman wine presses in the country, Nichelini also has the distinction of having a special winery bond number.

If you travel around Napa Valley long enough, you will run across these old bonded winery numbers. Heitz Cellars still has their “Bonded Winery 967” emblazoned on their old stone winery and the Pestoni family, who own Rutherford Grove Winery, proudly remind people of their long heritage by referring to “Bonded Winery 935” that was associated with their family’s Bell Canyon winery.

“They (the Nichelini family) are from the same Ticino region of Switzerland and are old family friends,” said Gregory Pestoni, who now helps run Rutherford Grove Winery and the family’s Calistoga’s hotel D’Amici and ristorante. “They can rightly claim to be the oldest continuously operated family winery in the Napa Valley. They were founded in 1890, two years before Albino Pestoni founded his winery. You can see they had bond number 843 to our 935.”

One of the reasons for having so few long-term winery families in the United States may be due in part to Prohibition, which was a nationwide constitutional ban on the production, importation, transportation and sale of alcoholic beverages that remained in place from 1920 to 1933. It forced many such families out of the wine trade, some converting their lands to other crops or moving away.

But the Nicholinis were not so easily dissuaded from processing grapes and making wine.

“To get through Prohibition we sold grapes to the vinegar industry,” said Patterson. “We also sold grapes that were shipped back to Chicago for the immigrant families that made homemade wine. The grapes were Alicante Bouche. Finally, the eldest son, Bill, was a wine distributor for Beaulieu Vineyards, who had a permit to sell altar wine to the Catholic Church. Independently, we had a wine-delivery system to individual households in Oakland and San Francisco. When pulled over by the authorities, Bill would say he was delivering wine to the churches and then showed his permit. It worked!”

Today all the wines made come from the family’s nearby vineyard, where common varietals such as merlot, zinfandel and cabernet sauvignon are grown alongside vines that were planted in the 1940s.

“The oldest vines we have today were planted in 1946. They are muscadelle or sometimes called sauvignon vert,” said Patterson. “It is one of the three Bordeaux white grapes, and they grow extremely well here. The other two are sauvignon blanc and sémillon. We grow those two as well. Our muscadelle vines are on St. George root stock and dry farmed.”

Two wines stood out during our tasting, the 2015 old vine muscadelle and the 2013 Zinfandel.

The muscadelle ($26 a bottle, and only 232 cases made) was straw-colored with intense aromas of peach and musty earth. The flavors were candied burnt orange and dried pear mixing with truffle and fresh parsley. This is a wine that takes a moment to get to understand, but those who do take the time will be rewarded with a wholly unique and wonderful experience.

The 2013 zinfandel ($35 a bottle and only 125 cases made) comes from vines planted in the year 2000 from cuttings from the 1929 Nichelini clone vines. This is not a heavy-handed, high-alcohol wine that you might find from many other Zinfandel producers. It represents what this often overly done varietal can aspire to when grown in the appropriate location and treated with delicate care. This is a wonderful wine. It shimmers brick-red and from even several inches away one can smell aromas of red raspberry and clove, followed by vanilla-cherry cola and cardamom spice. In the mouth this wine develops to reveal layers of brambly red and blue fruit, finishing with floral and maple syrup.

Nichelini is one winery that will reward those who are willing to take the time to slow down a bit and enjoy a depth and history that is refreshing. If you go, I’d recommend spending the afternoon, bringing a picnic lunch and touring the grounds, including the refurbished homestead cabin. You might not hear the whisper of Anton’s influence in the breeze, but you’re sure to taste it in the wines.

“We strive to produce truly world-class, American wines that exhibit finesse, simplicity and individuality,” Sunseri said. “I will continue to work so that I can live up to our family’s heritage and make my family proud.”

Inches off Highway 128 in the hills above Rutherford, the original 1895 Nichelini hand-hewn stone winery is just below the seven-bedroom house above that provided a home for their 12 children.

Anton Nichelini was photographed on Oct 10, 1928, in his Alicante Bouche vineyard in Chiles Valley, during Prohibition.

A fifth-generation winemaker, Aimée Sunseri is a direct descendant of the founders of Nichelini Winery. She is also the seventh consecutive family winemaker at the winery, here standing in front of one of only a few remaining Roman wine presses in the state.