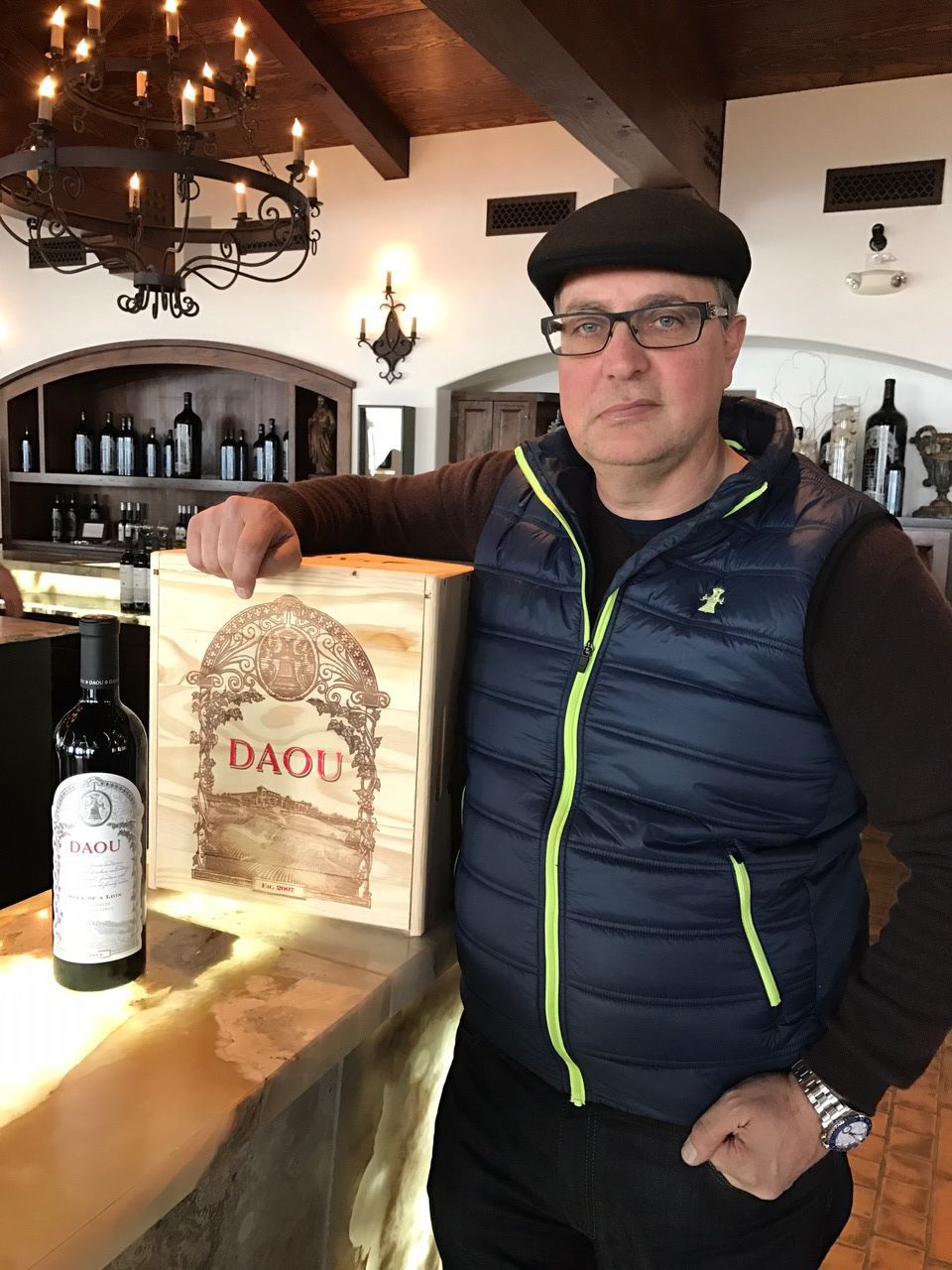 Daniel Daou is co-proprietor, with his brother Georges, of Daou Vineyards in Paso Robles. 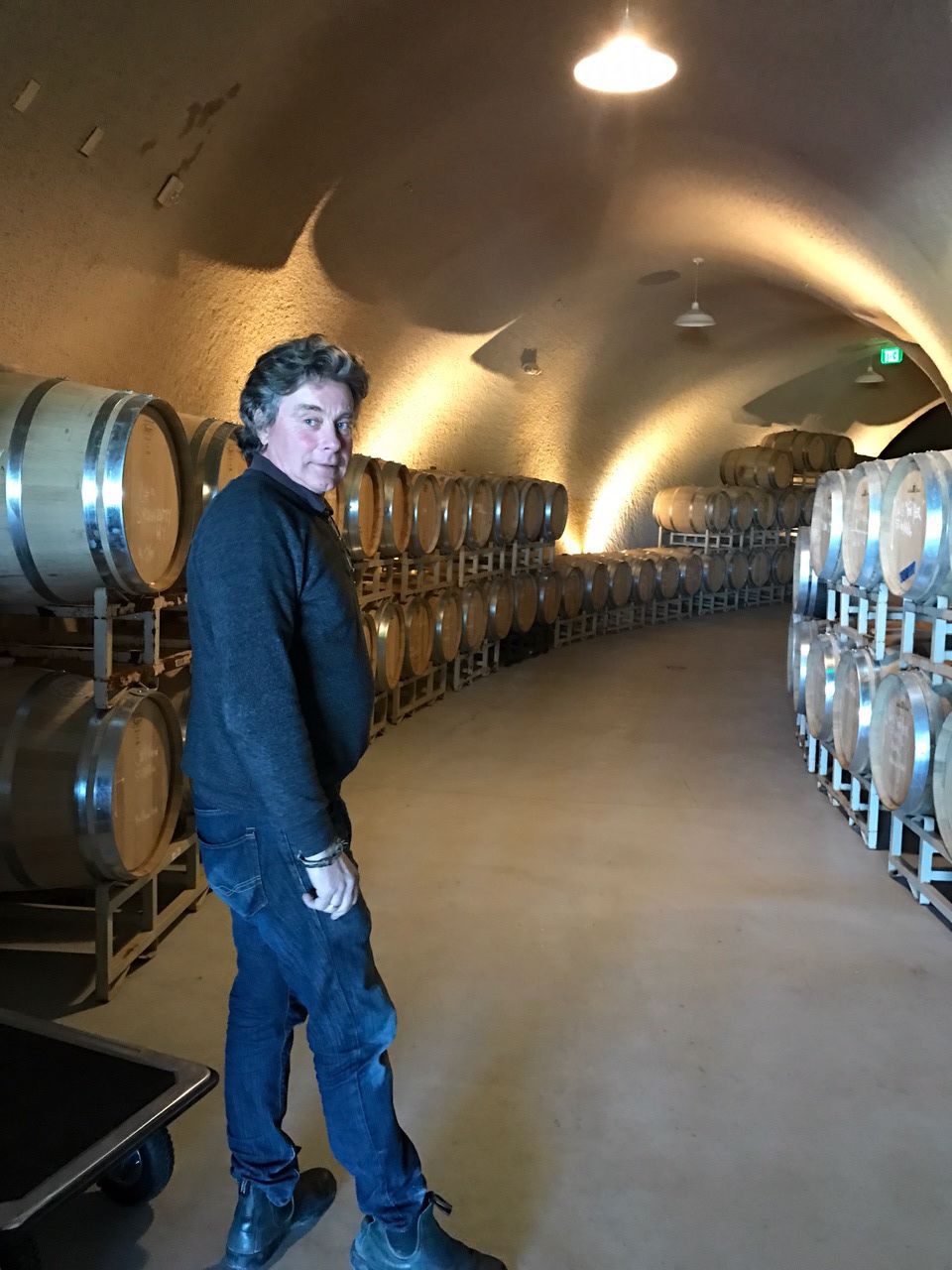 Stephan Asseo is founder and winemaker at L’Aventure winery. 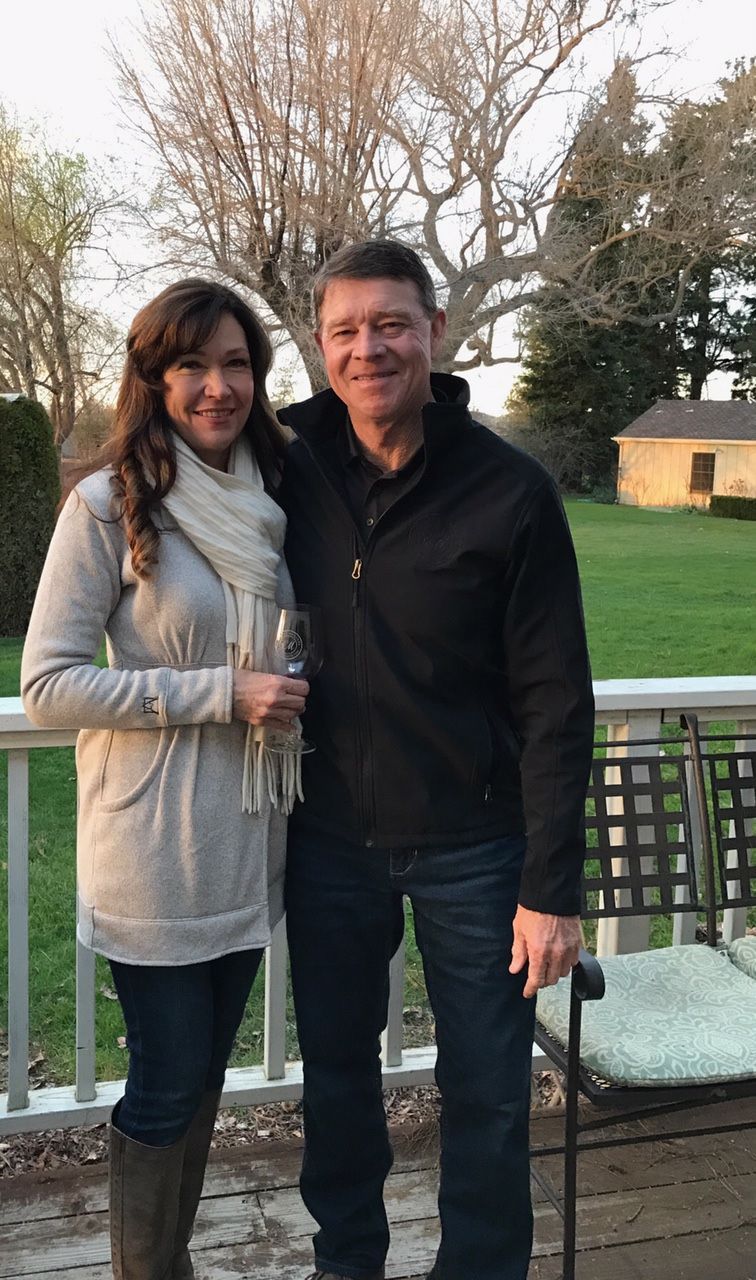 Michael and Margene Mooney are the owners of Chateau Margene.

Has the unthinkable happened? Are Paso Robles Cabernet Sauvignon wines now on par with Napa Valley’s?

Ask vintner Daniel Daou, who has been carrying the cabernet sauvignon torch ever since he arrived in Paso Robles with his brother, Georges, in 2007. Co-proprietor of Daou Vineyards, the vintner is naturally bullish on cabs and Bordeaux varietals from the Paso region.

Of late, Paso Robles cabernet sauvignon and Bordeaux-style blends have come on the radar of trade, media and the consumers. And vintners such as Michael Mooney, of Chateau Margene, Stephan Asseo of L’Aventure Winery, and Scott Shirley, director of winemaking at Justin, credit this to Daou’s unrelenting efforts.

Asseo, who, like Daou, is from France, arrived from Bordeaux in 1998 to make a crazy blend of cabernet sauvignon and syrah in Paso.

“I came with a vision and knew the terroir would allow me to do that,” he said. Paso was so little known even in early 2000 that he recalled when traveling around the U.S., the wine professionals he met all thought Paso Robles was more of a growing region than a wine production area.

Asseo acknowledged that Napa Valley was the first to produce high-end wine. “They are pioneers and they deserve the focus, thanks to Robert Mondavi.”

But Paso is moving into that same league, Asseo added.

True, Paso Robles cabernet sauvignon was — and is — a good source for Napa producers.

“In the 1970s and ‘80s, two-thirds or more of fruit we grew went out of the county,” noted Gary Eberle, founder of his eponymous winery on the east side. “Today it’s less than half but that’s still a big number.”

Most of the cabernet sauvignon vineyards in Paso are planted to a productive clone (clone 8) farmed for quantity and mediocre wine. But farming techniques changed over time to produce high quality cabernet sauvignon and Bordeaux style blends.

Once regarded as the Rhone zone, Paso is now hailed as cabernet country with 39 percent of the total vineyard acreage planted to this popular varietal.

Eberle, known as a syrah pioneer for his initial 1976 plantings, notes that in fact his planting in Paso in 1973 was to cabernet sauvignon. “Almost 200 acres on the east side,” he said.

So why this current attention and kudos to Paso cabernet sauvignon?

For one thing, the region offers ideal growing degree days. “We have the print of the sun and natural limestone and the diurnal shift,” Asseo said. Even if the wines are big, they have freshness.

“Paso started to be on the map in 2000,” he added. “Some producers started to make cabernet with quality and Daou is a good example.”

For Daou, Paso has the soil of Bordeaux and climate of Napa. “How can you get better than that?” Daou asked.

Mooney, who produces a mere 3,000 cases annually from his 9-acre vineyard in the Creston district, also credits the CAB Collective’s outreach to trade and media for bringing higher visibility to Paso Cabs.

For him, it’s all about the high phenolic content in Paso Robles cabernet sauvignon.

“Phenolics play a huge role in cabernet,” he said. “It’s a key factor in determining the wine’s age-ability, flavors and aromas, he adds.

Phenolic content in wine refers to the phenolic compounds — the natural phenols and polyphenols, which include several hundred chemical compounds that affect the taste, color and mouthfeel of wine. Two-thirds of grape phenolics are found in seeds while up to one-third in the skins. Only a small percentage is found in the juice and pulp.

Asseo, who produces 8,000 cases annually from his westside vineyard, has garnered high ratings from America’s number-one wine critic, Robert Parker, for his signature Optimus and Estate Cuvee — cabernet sauvignon, syrah and petit verdot blends. The vintner contends that Paso climate is good for high phenolics, but that’s not the only reason for polished Paso cabs.

“We don’t drive for phenolics but we have them,” Mooney said. “I look at the levels, it’s important for me, but it’s not my number one criteria.” For Mooney, it’s about flavor, structure and balance. “I want to taste Paso fruit.”

Argentinian winemaker Santiago Achával takes a poetic approach to Daou’s scientific stance. The Mendoza-based vintner was recently in Paso Robles visiting The Farm Winery, which he co-owns with the Madsen family. “There’s more in the poetry of the land and the subsoil and the climate than in chemistry,” he said. While he agrees that Paso cabs have phenomenal phenolics, he finds Adelaida district’s limestone highly seductive.

“The limestone in our soils are omnipresent in Paso Robles, and not significant in the rest of California AVAs,” said Achával, co-founder of Mendoza-based Achával-Ferrer Winery. “We need to explain how that limestone results in finer tannin structures that coat your mouth, cleansing your palate without strip-mining it.”

Shirley said, “I’m not one to harp on phenolics.” It’s a useful tool, he admitted, but phenolics have to be handled correctly to make a balanced wine. “Some of the results we’ve compiled, being part of the Cab Collective demonstrate conclusively that Paso Robles has the potential to make outstanding wines.”

Plus, it takes a skilled winemaker to work with grapes high in phenolics to make a balanced wine, to conduct gentle phenolic extraction that will retain all the subtle flavors in the wine without harsh tannins.

“Winemakers who don’t know how to handle it can make over-the-top wine,” said Daou, commenting on Paso Robles’ reputation of overly extracted wines.

Sounds like taming a wild beast. In fact, Daou admits that first couple of years his wines were 80 percent undrinkable.

“It was so phenolic, I didn’t know how to deal with it,” he said. The vintner soon learnt how to create a balanced wine that started in the vineyard and eventually developed his own vinification techniques.

Traditionally, a cabernet sauvignon wine that has less color has a phenolic level lower than 200 parts per million (ppm), Daou said. “Only a few top Bordeaux wines will reach 200 to 230 in color; that’s the average.”

Daou said he has measured more than 500 wines and never seen a Bordeaux wine higher than 230 ppm. “So reaching 200 is a respectable level,” Daou notes.

As for Daou wines, the flagship, Soul of a Lion, a Bordeaux style blend reaches 300 ppm; the Reserve Cabernet Sauvignon is between 240-250 ppm; the $20-plus Cabernet Sauvignon (available in grocery markets) is between 180-200 ppm; and the pricey Patrimony that garnered high points from The Wine Advocate is between a whopping 400-500 ppm. Daou’s annual production from its 142-acre property is 30,000 cases of which 20,000 cases make up the affordable $20 wines.

Daou, who spent many years being mentored by Bordeaux and Napa winemakers, said for him winemaking is based on his sensory data.

“When people taste our cab, they say, ‘It doesn’t taste like Paso’,” Daou said. What’s his reaction to that remark? “It does taste like Paso, but not a $15 bottle that’s made for the general public. It’s a high-end cabernet. It’s a refined Paso.”

So is there a rivalry between these two wine regions, a Napa vs. Paso in a cabs competition?

“Jeb Dunnuck from The Wine Advocate said that these [Paso cabernet] wines can go toe-to-toe with the best from Napa,” Daou said. “We are breaking the sound barrier, disrupting the wine industry.”

Shirley has a less promotional take on any such comparison: “I would not say [Paso is] better than Napa or better than Bordeaux or Sonoma,” Shirley said. “It’s just different.”

Shirley who served as winemaker at Napa Valley’s Hess Collection and as an enologist at Opus One, a American-French venture, relocated to Paso in 2012. He admits that Napa Valley has enjoyed a longer history and a recognized pedigree in the wine world, but Paso Robles is gaining deserved recognition and praise. This is the beginning of Paso’s unbridled potential.

Daou’s Patrimony Cabernet Sauvignon received high rating as well from The Wine Advocate: the 2013 rated 98 and 2014 earned 97-99 points. Of the 2015 vintage (96-99 points), a mere 200 cases produced from two blocks of estate vineyard, Dunnuck commented, “Big, rich, full-bodied, yet also graceful and elegant, it's a tour de force in Cabernet Sauvignon from Paso Robles.”

Achával concurs that single vineyard, terroir driven, hillside cabs from Paso are identified in blind tastings as being hillside Cabs from Napa. “Paso Cab has come of age.”

So what’s the key difference now between cabernets from these two California wine regions?

Asked this question recently, Eberle ponders for a moment, “Price,” he said.

Allen R. Balik, The Wine Exchange: The legacy of Prohibition

Some say Prohibition was necessary since excessive intoxication was destroying so many families through the 19th Century. Others say, it was “The Noble Experiment.” But in retrospect it was a calamitous time.

A few grapes make great wines and the rest of the world’s thousands of grapes make ordinary wines, most people say. But not Randall Grahm, says Dan Berger. "Grahm sees grape varieties as blank canvases bursting with potential, waiting for inspiration to sculpt something, much the way Rodin viewed an chunk of raw marble."

Dan Dawson, Dan the Wine Man:This perfect pairing Is based on emotion

Choosing your wines to drink with ballpark fare is more emotional than analytical. What do you want to drink on New Year’s Eve? Thanksgiving? Wines that make you happy, right?

RD Wines, founded by Dong Van Nguyen, pays tribute to his homeland in Vietnam by recreating a tropical ambiance to serve his wines with Asian-inspired cuisine.

The willingness of Josiah Baldivino and Stevie Stacionis to admit that their decision to open a second Bay Grape location in Napa came on the heels of a clarity-inducing mushroom trip in Snow Canyo, Utah, is enough to show that this really isn’t your typical Napa wine business.

The Wine Press: News from the Napa Community

2021 WineaPAWlooza is scheduled for a virtual event on June 19 and Joshua Mendoza-Widaman joins Pine Ridge.

Cults and garagistes and the story of Mark Herold Wines

Mark Herold’s first wine, Merus, made in his garage was an overnight success in the late 1990s. Although the world of wine has changed dramatically since Merus launched, one thing hasn’t changed: Herold’s wines are big, plush and consistently delicious.

Daniel Daou is co-proprietor, with his brother Georges, of Daou Vineyards in Paso Robles.

Stephan Asseo is founder and winemaker at L’Aventure winery.

Michael and Margene Mooney are the owners of Chateau Margene.