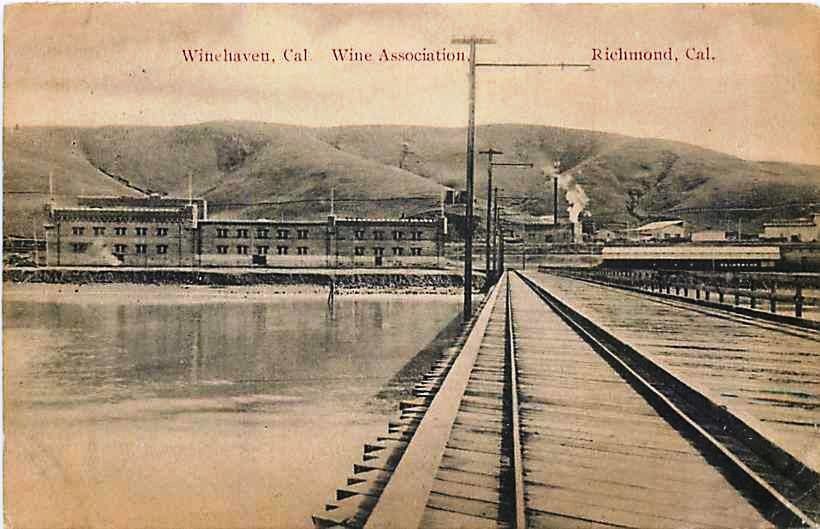 Would you believe the city of Richmond across the bay from San Francisco — best known as home to a large Chevron oil refinery — was once California’s undisputed wine capital?

That’s because in 1907, the state’s biggest turn-of-the-20th-century wine monopoly, the California Wine Association, built a 47-acre compound there, evocatively named Winehaven. As many as 12 million gallons of wine and brandy a year were once produced at Winehaven.

The location was not a whim: In 1906, 10 million gallons of CWA wine had been spilled in the San Francisco earthquake and boiled in the fires that followed. A 2015 book called “Tangled Vines: Greed, Murder, obsession, and an Arsonist in the Vineyards of California” by Berkeleyside co-founder Frances Dinkelspiel details the story of the CWA, which, at one point, controlled a staggering 84 percent of California’s wine business.

In 2000, Bay Area wine ephemera collector and historian Gail Unzelman co-authored a definitive history of the association, “The California Wine Association and Its Member Wineries, 1894-1920,” with the late wine historian Ernest Peninou.

Founded in San Francisco in 1894, the CWA was composed of a number of highly influential “someones,” including the biggest and most successful wine merchants in San Francisco, who had their hands in everything from the ownership of vineyards across the state to wineries and distributorships.

“In the 1890s, the California wine industry was a mess,” Dinkelspiel told me over the phone. The economic panic of 1893, she explained, had created a glut of grapes, severely depressing the price of fruit and wine alike. “The timing was right for someone to get in there and dominate the market in order to stabilize it,” she says.

By joining together to form the CWA, the merchants were effectively colluding in broad daylight to create a wine cartel, despite the fact that the Sherman Antitrust Act had just passed in 1890.

The main tactic of the newly formed CWA was simple — wait everyone out. As the biggest buyer of California grapes and biggest seller of the finished product, the CWA could force growers to accept the prices it was

willing to pay, lest they get nothing before the fruit rotted. Similarly, if wine sellers in Chicago, New Orleans and New York didn’t want to pay the prices the monopoly was demanding for its barrels and bottles of wine, the association could simply hold onto its inventory until the recalcitrant wine merchants had run out of theirs.

Not surprisingly, such strong-arming did not sit well with growers, winemakers and distributors not aligned with the CWA, which is why, by 1897, an all-out economic wine war was raging between the association and an upstart rival, the California Wine-Makers Corporation.

Because of its size and deep pockets, the CWA had the upper hand on the economic battlefield. Under the leadership of President Percy Morgan,

the association abandoned its 1893 tactics, which were designed to stabilize the wine market by holding the line on prices.

Instead, it slashed the cost of its wine, undercutting Wine-Makers Corporation wineries. By 1900, that corporation’s three most important members, including the Italian Swiss Colony winery of Sonoma County, had raised the white flag and joined the CWA At the turn of the 20th century, membership in the CWA was apparently the only way for a big California winery to survive.

The resolution of this battle between the dueling cartels paved the way for an unprecedented $1 million investment in the CWA in 1901. The equivalent of around $28 million today, the funding infusion was led by an investment banker and Southern California vineyard owner named Isaias Hellman, who just so happens to be Dinkelspiel’s great-great-grandfather.

The CWA represented a new investment opportunity for Hellman in a familiar agricultural sector. Hellman may have had holdings and roots, literally, in Rancho Cucamonga (Southern California), where he owned and ran the 600-acre Cucamonga Vineyard, but he could plainly see that the industry was moving north.

Sure, the Mission grapes that produced sweet, fortified wines like port did well in the south — the state’s first vineyards were planted in Southern California by Spanish missions in the late 1700s to produce sacramental wine — but the climate was poorly suited to varietals that would produce the dry table wines that were becoming increasingly popular for daily drinking in the late 19th century. Growers quickly discovered that counties like Sonoma and Napa were better for that. Sorry, SoCal.

In 1858, more than 46 percent of all the grapes grown and harvested in California came from the Los Angeles Viticultural District, home to the Cucamonga Vineyard. That year, Napa and Sonoma combined accounted for less than 10 percent of the state’s total production. A decade later, though, the two Northern California counties were on par with Los Angeles.

By 1870, more visionary agricultural entrepreneurs were already planting neat rows of Zinfandel grapes in Sonoma. There, and on the other side of the Mayacamas Mountains in Napa, the seeds of the modern age of California winemaking were being sown. And by 1890, Napa and Sonoma could claim more than 50 percent of the state’s total acreage in wine grapes, compared to less than 10 percent for L.A. Meanwhile, sweet-wine production was moving to the San Joaquin Valley.

Since its founding in 1894, San Francisco had been the CWA’s base of business operations, the place where deals were struck and millions of gallons of wine was warehoused in sites across the city. When the San Francisco earthquake struck on April 18, 1906, this geographic diversification looked like it had been a good idea since most of the CWA’s structures survived. But then came the fires, which consumed most of the CWA’s warehouses. According to wine historian Charles Sullivan in the April 2006 edition of Unzelman’s wine quarterly, Wayward Tendrils, “Of the twenty-eight commercial wine establishments in the city, twenty-five were destroyed.”

Immediately after the fires caused by the earthquake had died down, Morgan set out to build Winehaven, which allowed him to consolidate the CWA’s activities in one place, strategically located at Point Molate in Richmond, which he believed would be economically more efficient than having lots of warehouses spread all over San Francisco.

It was. The east side of San Francisco Bay, which lacked bridges at the time, was also closer to transcontinental railroad lines than San Francisco, while its rail-equipped deep-water dock anticipated the shipping lane that would open through the Panama Canal in 1914. In addition, the pier made it easy to offload grapes grown in Napa and Sonoma counties, which could be sent down the Napa and Petaluma rivers and across the bay to Winehaven for the fall crush. Some 25,000 tons of grapes were crushed at Winehaven in 1907, and in 1908, workers handled 45,000 tons of fruit, producing more than 675,000 gallons of wine that year.

Winehaven helped the CWA solidify its hold on the California wine industry. By 1909, the Calwa Distributing Company was formed “to bring the consumer, in glass, the best wines of the California Wine Association,” as Unzelman and Ernest Peninou put it in their book. Calwa and Ca-dis-co became two of the CWA’s biggest brands of “pure reliable wines,” as they were advertised. Unfortunately, keeping the CWA on its feet after the earthquake and during the construction of Winehaven had come at the price of Morgan’s health — by 1911, he would retire from the CWA after 15 years at its helm, retreating to Europe for three years of “rest and recuperation” before returning home to serve on numerous boards (Stanford University among them) and build a three-story mansion south of San Francisco.

Despite Morgan’s exit, the second decade of the 20th century began well for the association. “When the 1910 European vintage was virtually wiped out by bad weather,” Peninou and Unzelman wrote, “the California wine industry correspondingly prospered.”

By the middle of the decade, though, the CWA’s future was cloudy.

The association’s aging leaders were literally dying off, the outbreak of war in Europe in 1914 had slowed exports, and, most ominously of all, the growing Prohibition movement in the United States suggested that it was only a matter of time before the CWA’s very livelihood — selling alcoholic beverages — would be illegal.

In fact, the association first acted on the threat of Prohibition in 1907, when it began producing grape juice in earnest. As early as 1908, the CWA had been slowing its purchases of grapes from its growers, lest its inventories grow too quickly. By the end of 1917, Congress had passed the 18th Amendment banning the “the manufacture, sale, or transportation of intoxicating liquors,” which was promptly sent to the states for ratification.

All this made Percy Morgan, the man who had done more than anyone to make the CWA the force it had become, inconsolable. On the morning of April 16, 1920, just three months after the passage of the Volstead Act, which put regulatory teeth in the 18th Amendment, the CWA’s former leader, still in his pajamas, walked into the library of his mansion, raised a shotgun to his head, and pulled the trigger.

Meanwhile, the increasingly desperate CWA was trying to relocate its grape-juice business from the San Joaquin Valley to Winehaven, but this costly effort failed to generate the revenues needed to keep the enterprise afloat. As for its wine inventory, it was slowly sold as the law permitted — some export licenses were granted after Prohibition, and some of the liquid in the barrels at Winehaven were sold as sacramental wine, bringing the story of California’s wine history full circle.

Craig Becker, co-founder, general manager and director of viticulture and winemaking of Somerston Estate, has announced that his team will not harvest any fruit from the 2020 vintage due to smoke damage from Northern California’s Hennessey Fire.

Usually, this time of year, the Christian Brothers from Mt. LaSalle would be welcoming guests to their annual tasting and dinner to mark the a…

The questions without answers about the problem of smoke taint in grapes are increasing as wildfires grow in magnitude in wine country.

A tasting in light and dark: Faust Haus opens in St. Helena

Faust Haus, a tasting room for the Coombsville AVA wine, is now open in St. Helena.

Opus One announces a new CEO

Christopher Lynch is the new CEO for Opus One winery.

The 260-year-old Champagne Lanson hosts an outdoor tasting in Malibu.

As with many such preferences we all have, it often relates to how we were reared, going back to our earliest days after we are born -- and perhaps even prior to that.

It is no secret that Lang & Reed is the standard bearer of California Cabernet Franc, responsible for converting many of us and inspiring young winemakers to dive into this variety.