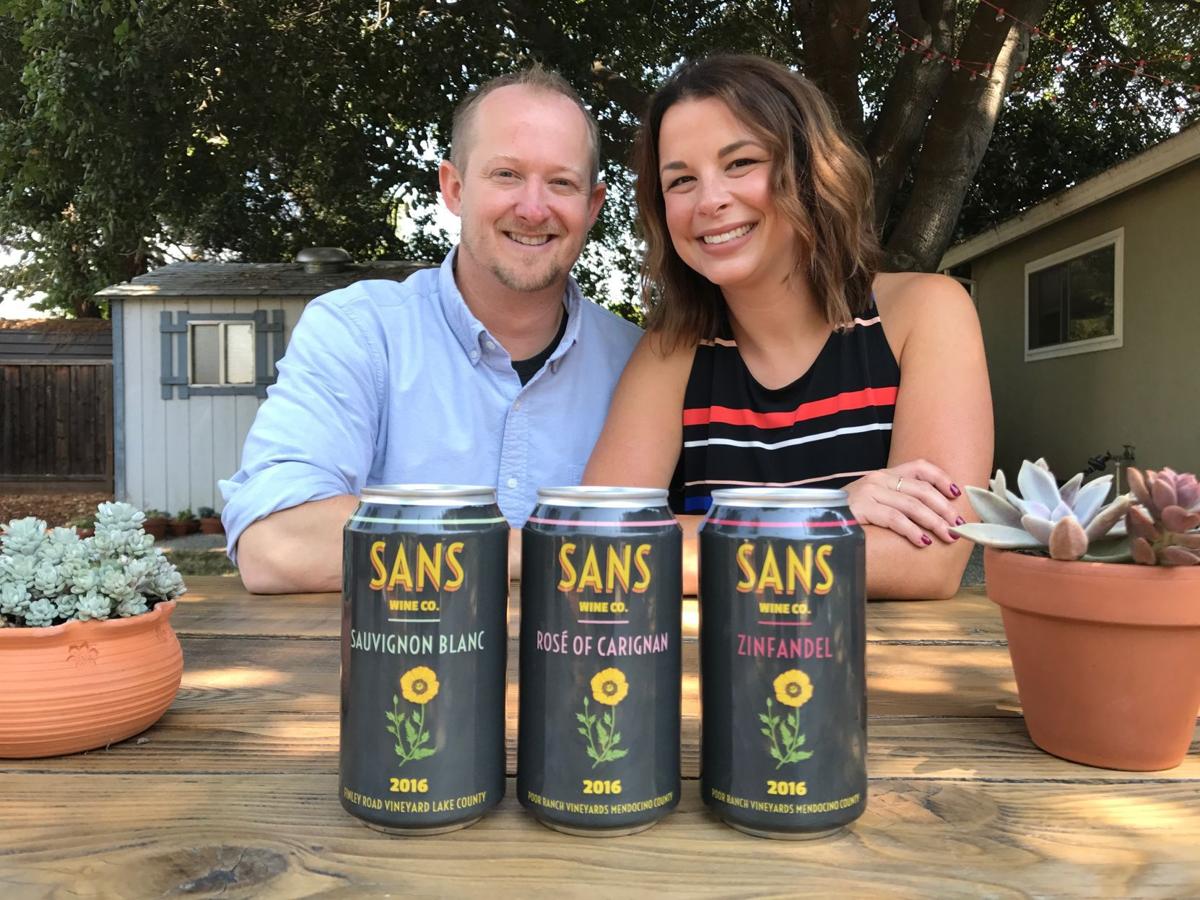 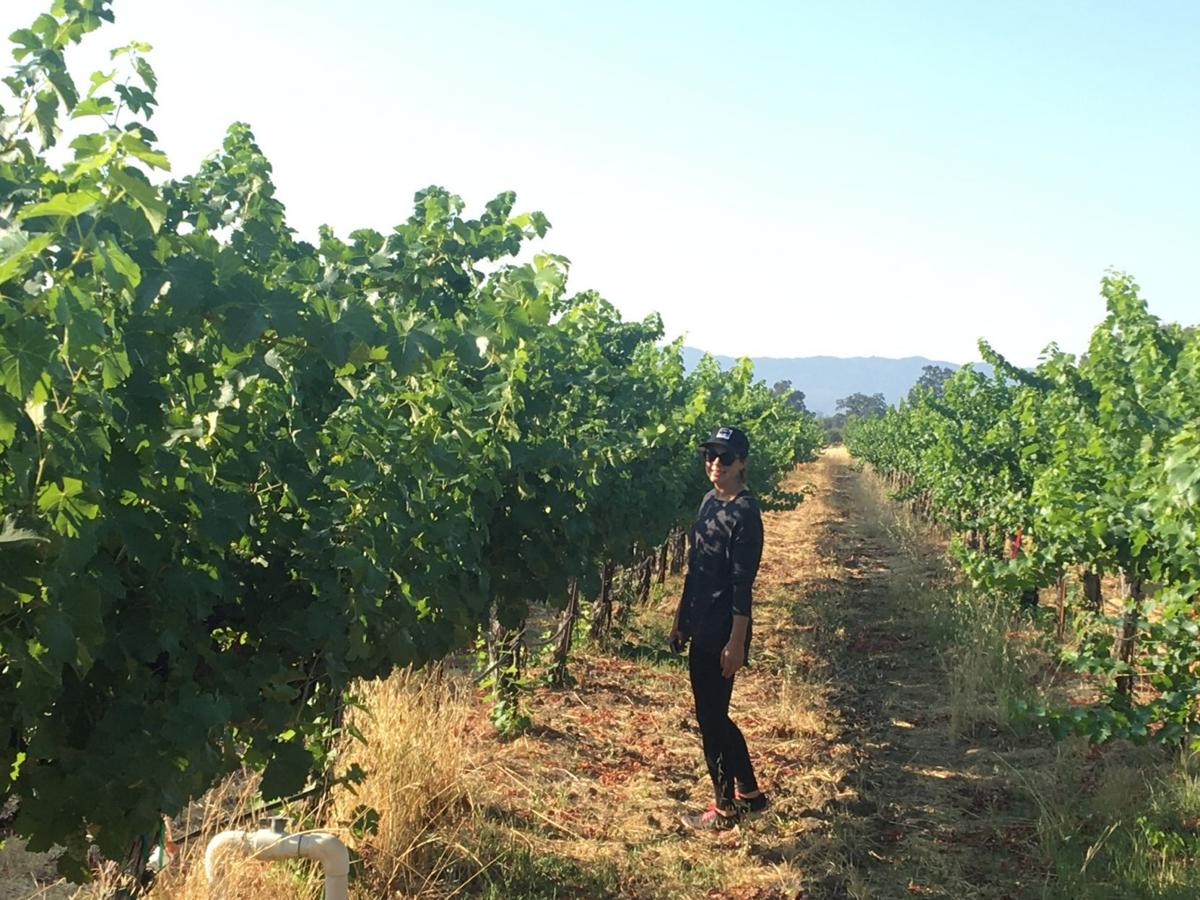 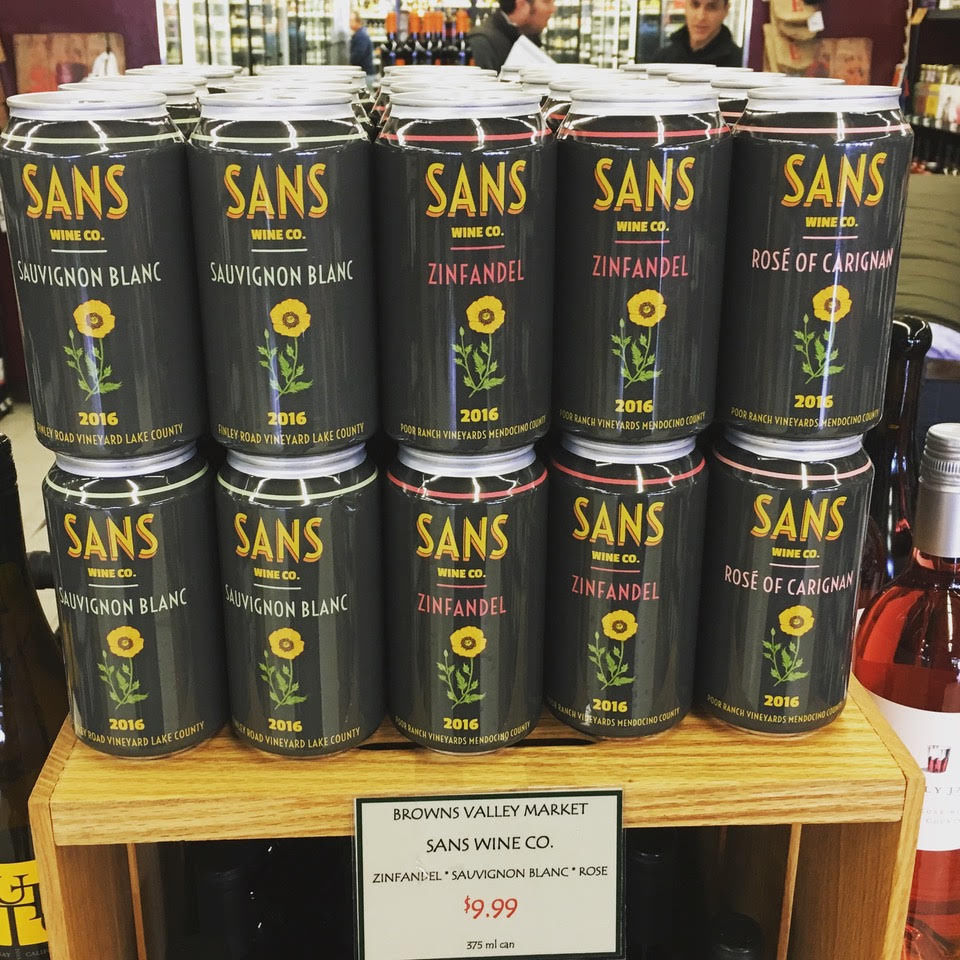 Sans Wine Co. produces a rosé of carignan, sauvignon blanc and zinfandel in a can.

There’s a better and uber-convenient way to sip wine while tailgating this football season. Or, while tearing up the bocce court. Or, while floating down the Russian River, which was the inspiration behind Sans Wine Co., a Napa Valley-based company that’s elevating the wine-in-a-can trend.

“I’ve never actually floated down the Russian River, but I know that’s what a lot of people do,” said Gina Schober, who came up with the idea for Sans in the summer of 2015, just before the canned wine movement really took off.

“I thought, ‘Wow, I know people that do this, people who like to drink beer, but also a lot of wine. What about putting rosé in a can?’”

Her co-founder and fiancé, Jake Stover, needed some convincing, but it only took about the hour-and-a-half car ride home from Russian River.

“I immediately thought it was a bad idea,” said Stover, who had long dreamed of starting his own wine label, but the traditional way, in bottles. “By the time we got home, we sat down and set up the business.”

The idea may have started with rosé, but Sans Wine Co. (pronounced like Vons, the supermarket), released its first three cans in 2016: a rosé of carignan, sauvignon blanc and zinfandel. The suggested retail price for the 375ml cans is $10.

Dedicated to quality, Sans is separating themselves from their competitors, most of which produce non-vintage, blended and bulk wine. They source solely from organically-farmed vineyards and employ natural winemaking practices; their tagline is “sans additives, sans chemicals, sans pretense.” Moreover, Sans wines are vintage, single vineyard and single varietal.

“We’re not making wines any differently than how we’d make them to put them in a bottle,” said Stover, who insists the can doesn’t affect the taste. “This is specific for a time and place. We’re not trying to replace bottles. We still drink wine out of bottles every day and love that, but it’s nice to have that portability, the convenience.”

Organic farming has always been important to Stover. He now runs his own vineyard management company, but got his start in the wine industry in 2008 as a harvest intern for Failla Wines. After just three days, the Kansas native was ready to leave his law school pursuits behind. He was given a full-time job in the vineyards after harvest, and spent the next four years at Failla learning the ins and outs of organic farming.

It has been a founding principle for Sans, and a main priority when seeking out vineyards.

“People are so into organic food and knowing where their food comes from, and I think wine gets overlooked in that category,” said Schober. But it comes from grapes. People really should know what’s going into their bodies.”

Sans sources its carignan and zinfandel from Poor Ranch Vineyards in Mendocino County. Homesteaded in 1888, the dry-farmed vineyard is still farmed by the family five generations later.

For the sauvignon blanc, it was important to Schober to look in Lake County, where she spent summers at her family’s lake house in Clear Lake. Her grandfather bought a 30-acre parcel on Cache Creek in the 1970s, and planted sauvignon blanc, plus a little bit of cabernet sauvignon.

Schober was too young to have spent much time out in the vineyards. And while she went to UC Davis, it wasn’t for wine. She and Stover, who met on Tinder, coincidentally both double-majored in Communications and Italian at separate universities. Instead, she found her way into the industry after spending years working for restaurants, moving her way up into management and the wine program. Schober spent two years as a sommelier at Bouchon, but now she’s on the sales side of wine, a skillset that is put to use every day now with Sans.

Seeking a way to honor her grandfather, the couple, both 32, eventually found Finley Road Vineyard in Finley, which is in Kelseyville. The 25-year-old vines are surrounded by pear orchards.

“Funny enough, the guy that farms the vineyard had helped my grandfather harvest his vineyard about 25 years ago,” said Schober.

Sans made 1,100 cases last year. And in the midst of planning their December wedding, will release three additional cans in early 2018. These will be at a slightly higher price ($15) due to the use of higher-quality, old-vine fruit, they said. The result will be smaller quantities of a second zinfandel and rosé of carignan from the same vineyard, but from vines that were planted back in 1951 and 1943, respectively.

They’re also adding a new varietal and their first Napa Valley wine: riesling from a Rutherford vineyard on the valley floor, one of the last remaining riesling vineyards in the area, which has been organically farmed for 60 years.

They also distribute to five San Francisco locations, and a handful of others in the Bay Area. Most recently, they also landed Vino Volo at the Sacramento Airport. Look for them in Terminal A and B.

The willingness of Josiah Baldivino and Stevie Stacionis to admit that their decision to open a second Bay Grape location in Napa came on the heels of a clarity-inducing mushroom trip in Snow Canyo, Utah, is enough to show that this really isn’t your typical Napa wine business.

One of the wine industry’s Achilles heels, and a topic no one ever talks about, is that domestic wines’ retail prices always seem to go up and almost never come down.

The Wine Press: News from the Napa Valley community

St. Supéry Estate Vineyards is thanking the community for help during the 2020 wildfires by donating proceeds from the sale of its 2020 Napa Valley Estate Sauvignon Blanc.to the Napa Valley Community Disaster Relief Fund.

Heroes of the Valley: A tribute to Napa County's farmworkers

Photographer Geoff Hansen and music composer William Gantt have collaborated to create "Heroes of the Valley," a tribute to Napa County's farmworkers.

RD Wines, founded by Dong Van Nguyen, pays tribute to his homeland in Vietnam by recreating a tropical ambiance to serve his wines with Asian-inspired cuisine.

The World in a Glass: Toasting Biale's Black Chicken

Far Niente Family of Wineries & Vineyards has announced a series of promotions within its winemaking and vineyard management teams.

Cults and garagistes and the story of Mark Herold Wines

Mark Herold’s first wine, Merus, made in his garage was an overnight success in the late 1990s. Although the world of wine has changed dramatically since Merus launched, one thing hasn’t changed: Herold’s wines are big, plush and consistently delicious.

Sans Wine Co. produces a rosé of carignan, sauvignon blanc and zinfandel in a can.