Become a Member
Read Today's E-edition
Share This
Series: The Women of Oakville Ranch, Part 1
Share this
1 of 6 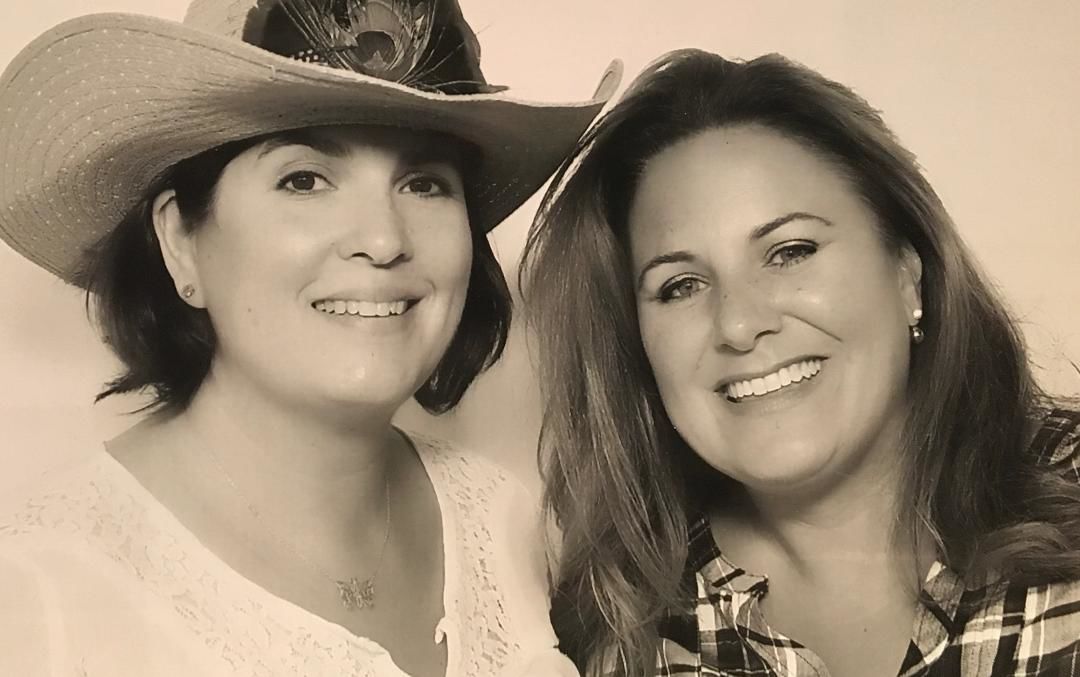 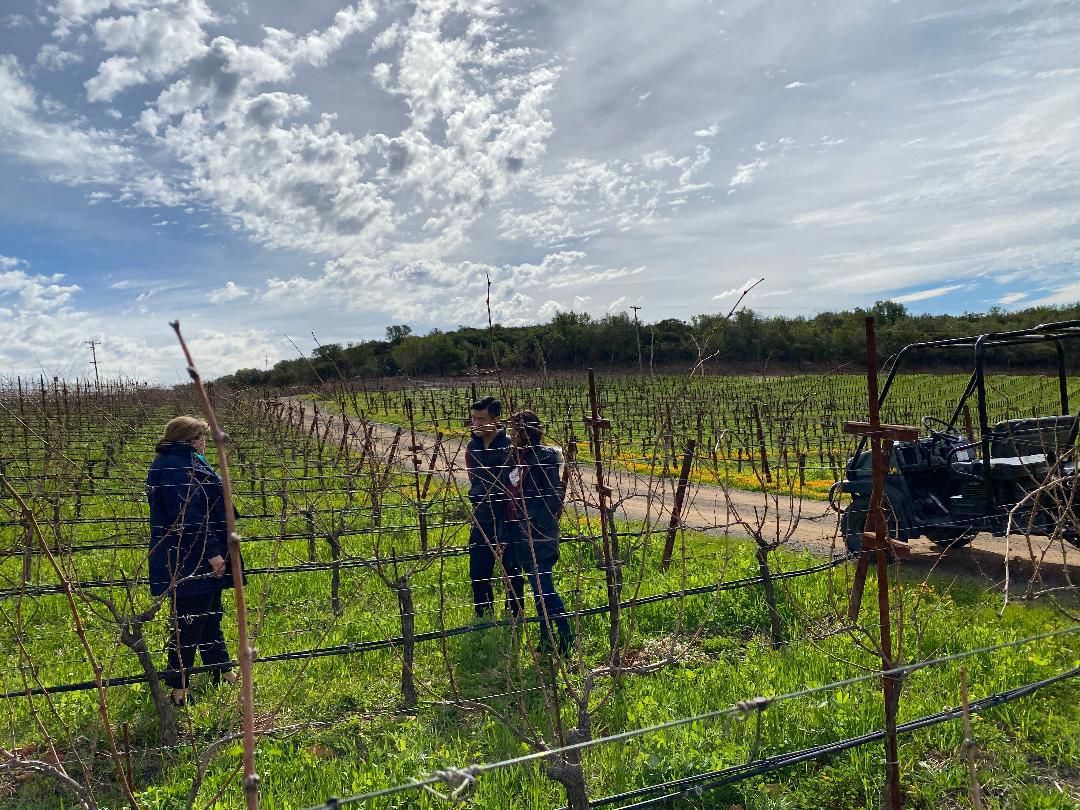 Oakville Ranch General Manager Shelia Gentry on her ATV in the vineyard. 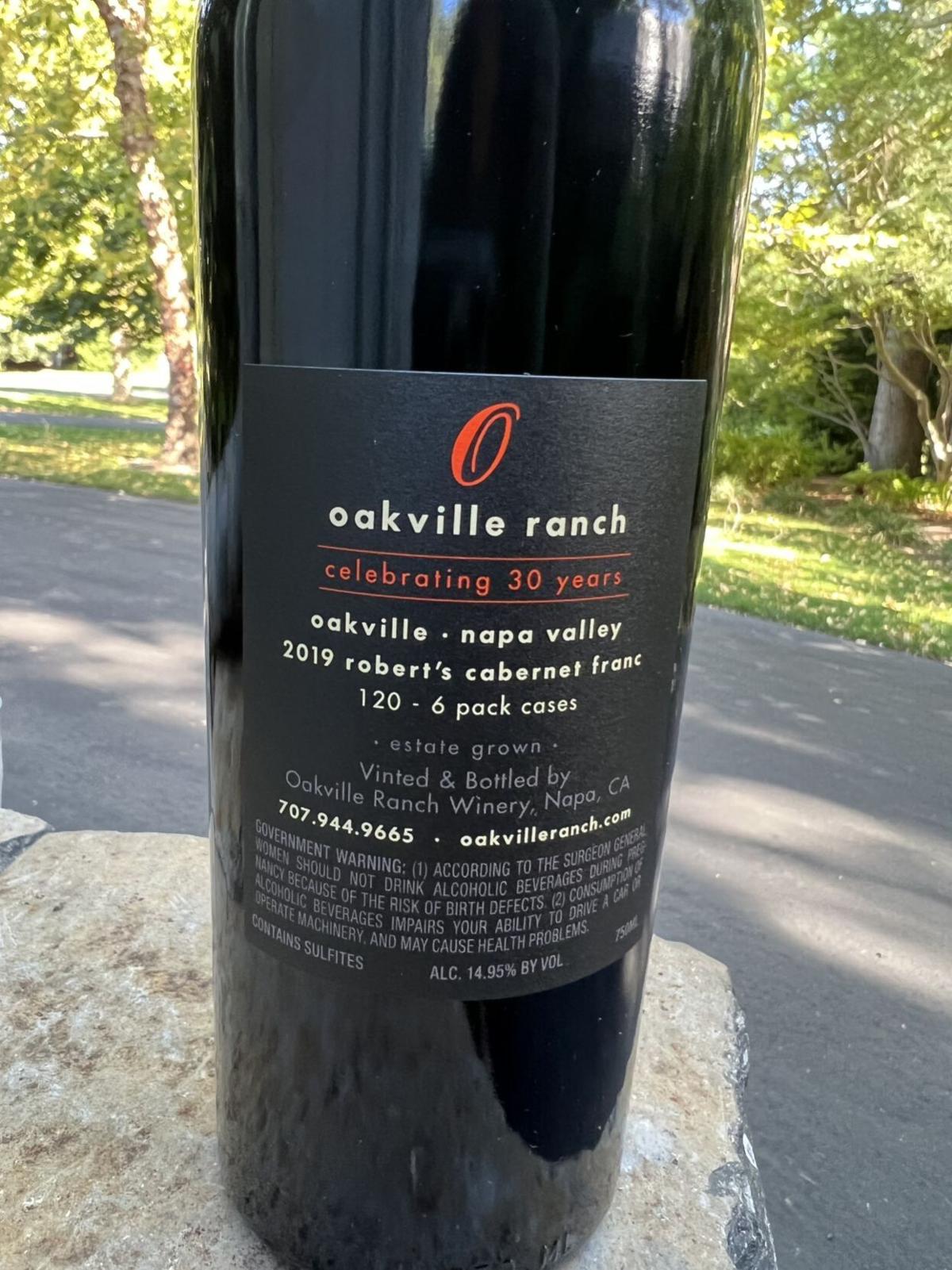 The back label of the Oakville Ranch 2019 Cabernet Franc commemorates 30 years in operation. 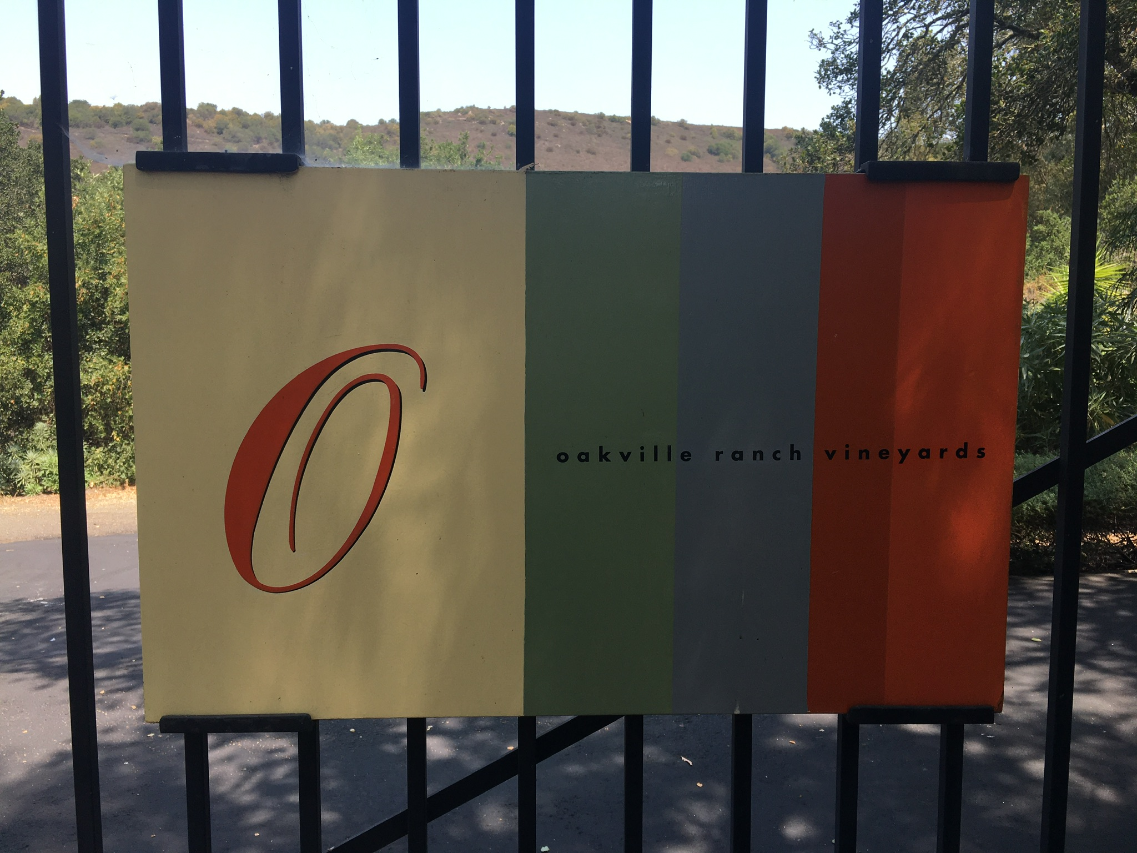 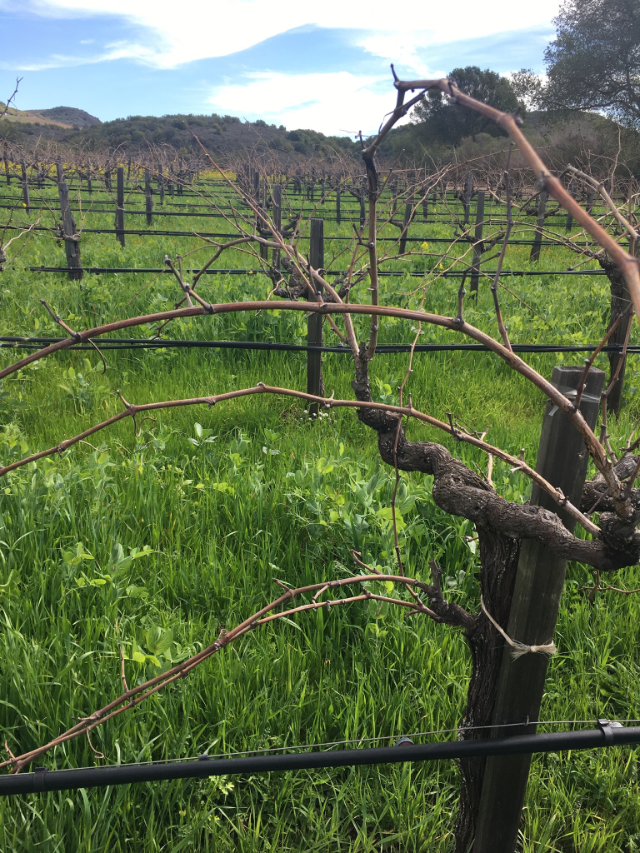 It takes Shelia Gentry just two words to describe the hills above Oakville: She calls them “awe-inspiring.”

Whether wild with chapparal or covered in vines, there’s no shortage of other descriptors for this rocky, verdant slope on the east side of Napa Valley. Rising up beneath the picturesque Vaca Mountains, its contours make an impression from Highway 29 and the floor of the Valley.

Among the superlatives often applied to the Oakville AVA’s wines, Gentry’s are perfectly suited to her workplace itself, Oakville Ranch. The surrounding landscape, forged by volcanic activity millions of years ago, is part of a plateau that sits like a banquet table above the Valley. The Oakville Ranch wines are certainly banquet-ready.

It’s hard to say what the ranch’s owner, Mary Miner, might have accomplished as a fellow vintner to her late husband, Robert, the co-founder of Oracle Software and a dedicated wine lover. Oakville Ranch was their shared project, but the tech pioneer died in 1994 before their wine brand had time to gain a commercial foothold. Instead, Mary and her small team, composed mostly of women, have since built one of Napa Valley’s essential, if sometimes overlooked, wine estates.

Its grapes and wines come from a property where Gentry, a Napa native, has been general manager for close to a decade. She works alongside Jennifer Rue, the ranch’s winemaker and an industry veteran who has been associated with it for the better part of her career. Rue stands at the head of a line of vintner clients who buy Oakville Ranch grapes for their own brands each harvest. It’s a prestigious class of fellow winemakers, to the point where the name “Oakville Ranch” is perhaps better known as a source of top-quality grapes than as a label of its own.

The low profile is no accident. “We're not an in-your-face kind of brand,” Gentry says, “and we never will be. We want to be on the radar but off the beaten path.”

The GM heads up the hill each day to a place that’s both refined and rugged. She divides time at the ranch between an elegant, 19th-century cottage-office and the driver’s seat of a Kawasaki Mule. The cottage sits adjacent to the ranch home; the compact ATV is her “other” office — a mobile one she uses to introduce visitors to her employer’s historic property.

“When I have people come up to Oakville Ranch, I want them to leave as our ambassadors,” Gentry said on a breezy afternoon this past July. She sat next to Rue under the shade of an umbrella at Materra winery in Napa’s Oak Knoll District where her colleague makes the Oakville Ranch wines. “I want them to tell their friends about who we are and their experiences they had and the wines that they enjoyed. That's the best PR we could get. It's word-of-mouth.”

If at times that word has to be spoken loudly over the rumble of an ATV engine, the communication seems to be working. The 2019 vintage wines now being released represent Oakville Ranch’s 30 years in business. A simple mention on the back labels of the ’19 red wines —“celebrating 30 years”— is all it says, but a lot has happened over three decades.

A few winemakers have worked on the ranch since Mary and Bob Miner harvested their first grapes in 1989. Jen Rue, a Santa Monica native who brewed beer in college, followed an interest in fermentation to Napa Valley in the mid-90s. She landed in the tasting room at Franciscan Winery but soon jumped to the production side, recruited by then-winemaker Gary Brookman.

“It was formative to have come across such an exceptional property so early in my career and incredible to think I've touched 22 of the last 26 vintages of Oakville Ranch,” she wrote in a recent email.

A highlight of that career, as Rue described it in the same email, was taking over the ranch’s winemaking in 2016 after assisting two previous vintners, Ashley Heisey and Anne Vawter. By that point, her history with the ranch and its owner was well-established.

“I mean for me, primarily, the person I feel I have to please is Mary,” she shared at Materra of their working relationship. “You know, above and beyond anything, we want her to like what she's got. And Mary’s got her name on the wines.”

She wasn’t being literal. There’s no “Mary” or “Miner” to be found on any Oakville Ranch label. Most associations with the Miner name are tied to the well-known Miner Family Winery, also in Oakville but down the hill and a little ways north on the Silverado Trail. It was founded in 1999 by Dave Miner, Mary’s nephew.

Not coincidentally, Miner’s hillside property housed an earlier version of Oakville Ranch Winery, the one Gary Brookman left Franciscan for with Rue at his side. Miner was the Oakville Ranch president at the time and purchased the winery from his aunt to launch a new brand with his wife, Emily. Brookman’s job eventually morphed into the winemaker’s position at Miner Family and is where he works with Dave Miner to this day.

Gentry arrived a while after Rue, in 2013, having built an impressive resume at Shafer Vineyards, Harlan, and Sloan Estate. “I did sales, hospitality, distribution—all of the above,” she said.

If there was a career advancement mentality at those high-profile wineries, she seems to have hit a stride with her current employer. “Mary’s aware of everything that we do. I think she has entrusted us with her brand, and in making decisions about it.”

Then she summed it up. “Oakville Ranch is the last job I ever want to have.”

The relative anonymity of the two women’s boss doesn’t translate to a lack of involvement. While she’s not the face of the brand, Mary Miner wants to contribute where’s able, according to her GM. She poured tastes of the Oakville Ranch 2019 Chardonnay and explained that Mary’s behind-the-scenes contributions are significant. “She does sit down in all of the tastings with us and participates in blending sessions to decide the wines” that go into bottle.

Rue sipped the Chardonnay she’d made—with Gentry’s and the owner’s input—and considered her own role. “I would say making wine for someone is a really intimate endeavor. And I think even more so in a project like this, where it’s such a kind of crystallization of a place and a family and a story.”

Intentionally or otherwise, she played for a moment off of that family’s high- tech history, describing Mary as “sort of the operating system that's running in the background, that drives how we make our decisions.”

Then she clarified her point. “It sort of feels disingenuous to say she's ‘in the background,’ because she's ever-present. She's just not controlling, and she's not directing. We're given all of the tools that we need to do what we need to do, but without the micromanaging.”

The tools and the raw materials, Rue might have added. Chardonnay, Cabernets Sauvignon and Franc, and an old-school field blend of Zinfandel and Petite Sirah are grown in Oakville Ranch’s 70 planted acres. There’s also a block of Grenache in the vineyard, which she vinified as a dry rosé in 2020. While some decision-making is ongoing about the red wines to be bottled from that fire-ravaged vintage, the 31 harvests preceding last year’s add up to momentum in 2021.

Going forward, the three women are making some adjustments to how the Oakville Ranch brand is perceived. Beneath the “30 years” mention on the 2019 back labels, they’ve added the familiar term “estate grown.” It’s just a couple of words, but they speak volumes about the wine’s single origin. The addition highlights how Oakville, the ranch, is a specific site within Oakville, the AVA.

It was a piece of information omitted in previous vintages. But, as Rue explained it, “I think that as consumers get more and more savvy, you kind of need to leave those breadcrumbs, something to help them understand, like, ‘Oh, this is a wine of a place.’"

Gentry concurred. “We need to keep reiterating that: it's a wine of a place, and we're 370 acres on top of Oakville, overlooking the Napa Valley. And yet sometimes people are like, "’Wait, where?’"

If those same people consult Google Maps, they’ll discover a location that looks to be a stone’s throw from the Silverado Trail. Switching to the satellite option makes the variations in terrain — from the wild chaparral to the manicured vines — more apparent. What’s lost in this mapping, since it’s not possible to “street-view” the location up its steep driveway from the Trail to the front gate, is how tucked away it actually is. When Gentry describes the ranch being “off the beaten path,” her guests can take her at her word.

There’s something else Google Maps reveals about Oakville Ranch, courtesy of a function the search engine debuted in 2018: The business identifies as women-owned. This exact message appears under the address, phone number, and other contact information. Not unlike the “estate grown” designation on the 2019 back labels, it says a lot about the ranch in just a few words. Women run this place.

Or, mostly women; Phil Coturri is an exception. The owner of Enterprise Vineyards in Sonoma is one of Northern California’s most respected organic viticulturists. He works for, and alongside, the women of Oakville Ranch and is their direct connection from the wines back to the vines and soil.

Good News Stories of 2020 from Napa County winemakers and grapegrowers

Despite the trials of 2020 for the wine industry, there are still successes to report.

Rebuilding a dream on the mountain: Behrens Family Winery and the Glass Fire

Lisa Drinkward and Les Behrens lost a winery in the Glass Fire, but are still optimistic about their business.

Oakville Ranch General Manager Shelia Gentry on her ATV in the vineyard.

The back label of the Oakville Ranch 2019 Cabernet Franc commemorates 30 years in operation.