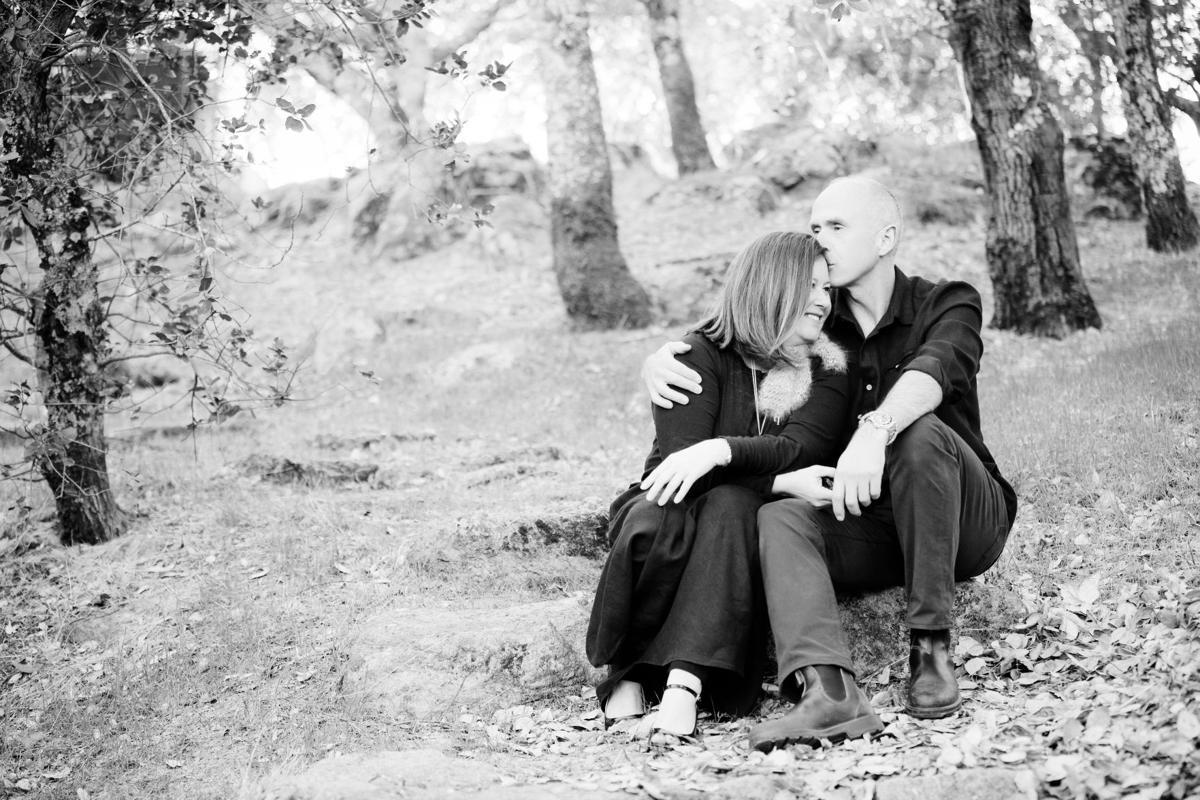 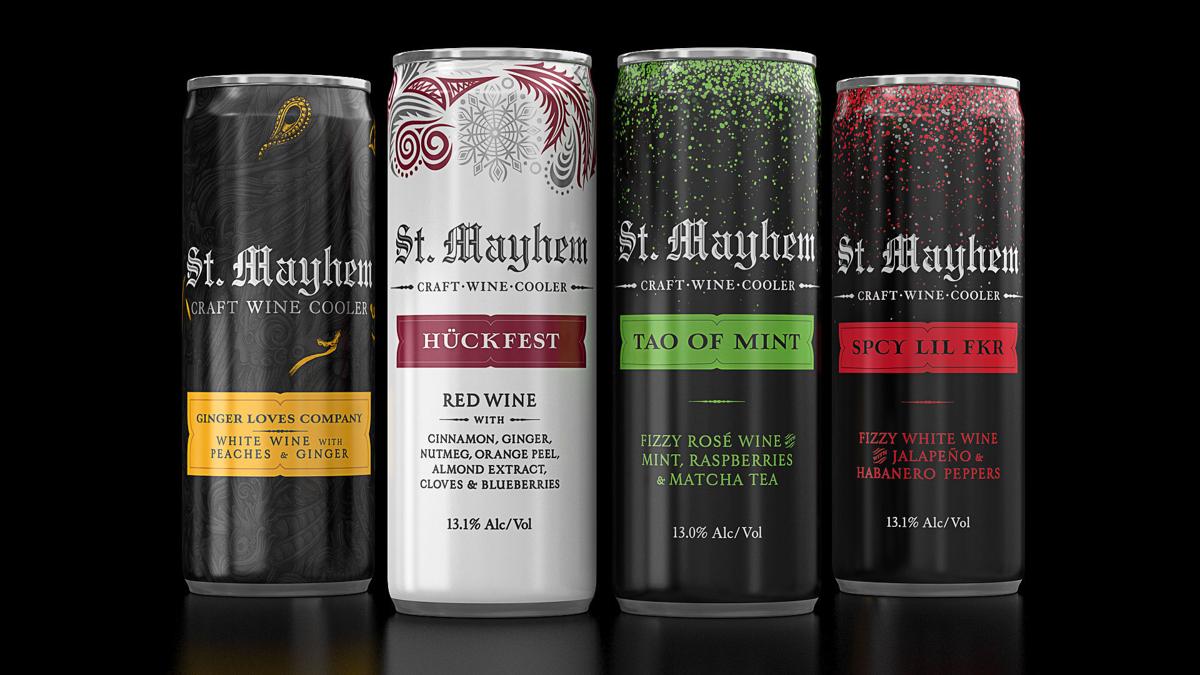 It starts as wine. But before a concoction from St. Mayhem reaches its growing audience, founder-owners and winemakers Kat and Rob McDonald tweak the equation, removing from the final formula as much convention as possible. They prefer peppers.

“Mounds and mounds” of them, Kat said of the jalapenos and habaneros that are blended with a Lake County sauvignon blanc, imparting their flavors on the wine before being strained off.

Or peaches; there are the Pacific Northwest varietals of the fruit that are pureed to join a mashup between dried ginger and chardonnay from Clarksburg and Napa.

Or the fresh mint, hundreds of pounds worth, on which a blend of chardonnay and sauvignon blanc sits with raspberries and Matcha Tea before bubbles are added, becoming what its creators call Tao of Mint, or, “the lovechild between a rosé and a mojito.”

Speaking in the St. Mayhem headquarters on Coombs Street in Napa earlier this month, McDonald attempted to define the fusions dreamt up with her co-founder, co-owner, co-winemaker and husband Rob. “It’s not just wine,” she said. “We just kind of kept going.”

Kat, a native of New Orleans and Rob, of Australia, began traditionally, producing sauvignon blanc and cabernet sauvignon through labels like Girls in the Vineyard. The couple still produces their customary wines which, like St. Mayhem, fall under the purview of their winery Art + Farm Wine.

“And then St. Mayhem is its own kind of separate animal,” Kat said.

“We started just making really good wine and then we just didn’t want to stop.” Experiments with co-ferments and aging the wines on a litany of ingredients, from chocolate and dried cherries to the eventual peppers, gradually began to yield creations that clicked. “For years, we were just playing around,” McDonald said, “… and eventually landed on a few that just worked.”

While polarizing, St. Mayhem’s inventions have cultivated a steady momentum over the brand's short six- or seven-year history, pushing it into a growing number of stores and onto wine lists, garnering praise from the likes of Wine Spectator, and prompting the McDonalds to now seek a permanent home for the brand in the form of its own production facility.

Ahead of the expansion, the team grew its ranks this year by six new employees and in July began tackling the market for cans or as McDonald dubs them, “craft wine coolers.”

In the works since about 2010, the first bottles of St. Mayhem were made and sold in 2015. Since then, production has inched up, McDonald said, mostly taking place at Mendocino Wine Company in Ukiah and Bin to Bottle in Napa.

Though exact amounts today are elusive, lots are small, she said, estimating that numbers for their latest cooler, Hückfest, came to roughly 1,500 cases of 250 milliliter cans.

A collaboration with family friend Andy Erickson, one of Napa’s most celebrated winemakers whose credits include the high-end wines of Mayacamas Vineyards, Ovid and Screaming Eagle, Hückfest offers a St. Mayhem take on mulled wine; a marriage between red varietals from Amador County and a cast of spices. The concept matured from the flasks of mulled wine Rob and Andy would devise on trips to Squaw Valley for their children’s ski races. To McDonald’s knowledge, the wine is the first of Erickson’s efforts to make its way into a can.

Adding another foothold to St. Mayhem’s growing reach, the Hückfest debuted this month in all Whole Foods stores throughout Northern California.

Before the advent of St. Mayhem in cans, such distribution was more challenging, McDonald said. Though buyers would eagerly take on bottles of St. Mayhem, she said, many then faced the hurdle of “‘Where do I put this in my store?’”

“We sort of created a category. We weren’t just creating a new wine. It’s a whole new category.”

The coolers continue to defy consumer-friendly categorization, yet with each can coming in at slightly more than a serving size, curious drinkers are offered a slightly easier point of entry.

As for wine lists, St. Mayhem is available mostly in Southern California restaurants and brewpubs, per its distribution through Stone Brewing. In that vein, the brand has a place reserved on the menu at Stone Brewing’s upcoming brewery and restaurant in downtown Napa, and is thus far the sole ‘wine’ being offered.

Explaining the decision to carry the brand earlier this year, Stone co-founder Greg Koch, also a longtime friend of the McDonalds, noted its appeal from a brewer’s perspective. “It’s a very craft beer approach to wine,” he said. “A lot more of the ‘why not?’”

Working with Stone also brings full circle a back and forth of distribution between the McDonalds and Koch. The couple previously owned and operated Old Bridge Cellars — the first to distribute Stone Brewing outside of the brewery’s hometown San Diego area.

Fast-forward to the creations of St. Mayhem, “We were enjoying drinking them," McDonald said, "but we were like, ‘No one’s going to buy them’. And (Greg) said, ‘Yeah they will. I’ll prove it to you.’”

Today, the demand speaks for itself.

“More people want it than we can make right now,” McDonald said. “We’re kind of at the tipping point … We can’t get on canning lines fast enough.”

Hence the need for a production facility specifically for St. Mayhem, which the McDonalds are hoping can be found in Napa.

“This is our home,” she said. “…it’s the center of wine. It’s geographically beautiful. All that aside, this is an incredible community of people. I can’t say enough about them.”

Such a facility would likely include a tasting room, she added, though “it couldn’t be what everybody else is doing. We would kind of have to St. Mayhem it.”

With Hückfest bringing the current St. Mayhem portfolio to four craft wine coolers, the sights for long-term production are set on a dozen coolers being available year-round and another half a dozen appearing seasonally or as one-off experiments. For now, the next concoction is in the works, something McDonald calls an “ode to sangria," while on the distribution front ‘Tao of Mint’ is set to hit Whole Foods shelves next year.

In the meantime, as the hunt for a facility continues in tandem with a widening reach and mounting demand, McDonald counts St. Mayhem's limits as few.

“If there’s anything that’s going to prevent us from growing,” she said, “…it’s going to be if we can’t get the quality of ingredients we want.”

Other than that, “The rules don’t apply.”

Matt Parish: Balancing the art, science and business of winemaking

The multi-faceted Matt Parish talks about his career as globe-trotting winemaker.

Celebrities are touting their "clean wines." Is it anything more than a marketing ploy? The short answer is: no.

'Pawlooza in Place' raises more than $1 million at online event

WineaPAWlooza 2020, “Pawlooza in Place,” raised more than $1 million at their first virtual and live auction held on July 25.

Hess Collection pairs with 'Pour One, Plant One' program

The family-owned Hess Collection Winery in Napa has partnered with the National Forest Foundation for Pour One, Plant One program, building on it environmental legacy with a commitment to plant 25,000 trees.

The Fisher family has consistently made some of the region’s finest wines since the late 1970s, and yet somehow they’ve remained mostly out of the spotlight.

The Napa County Farm Bureau is revamping the way it will hold this year’s annual Love of the Land celebration because of the coronavirus pandemic.