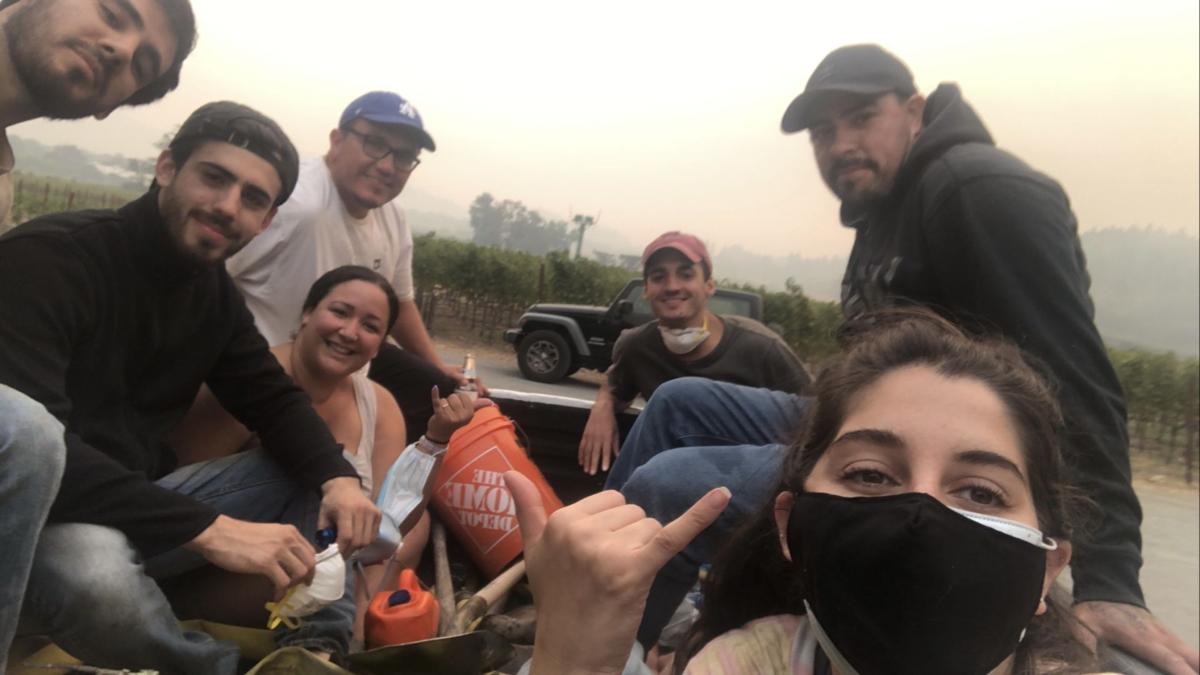 Team Madrigal from Madrigal Family Winery in Calistoga pitched in to help fight the Glass Fire that burned upvalley in late September. 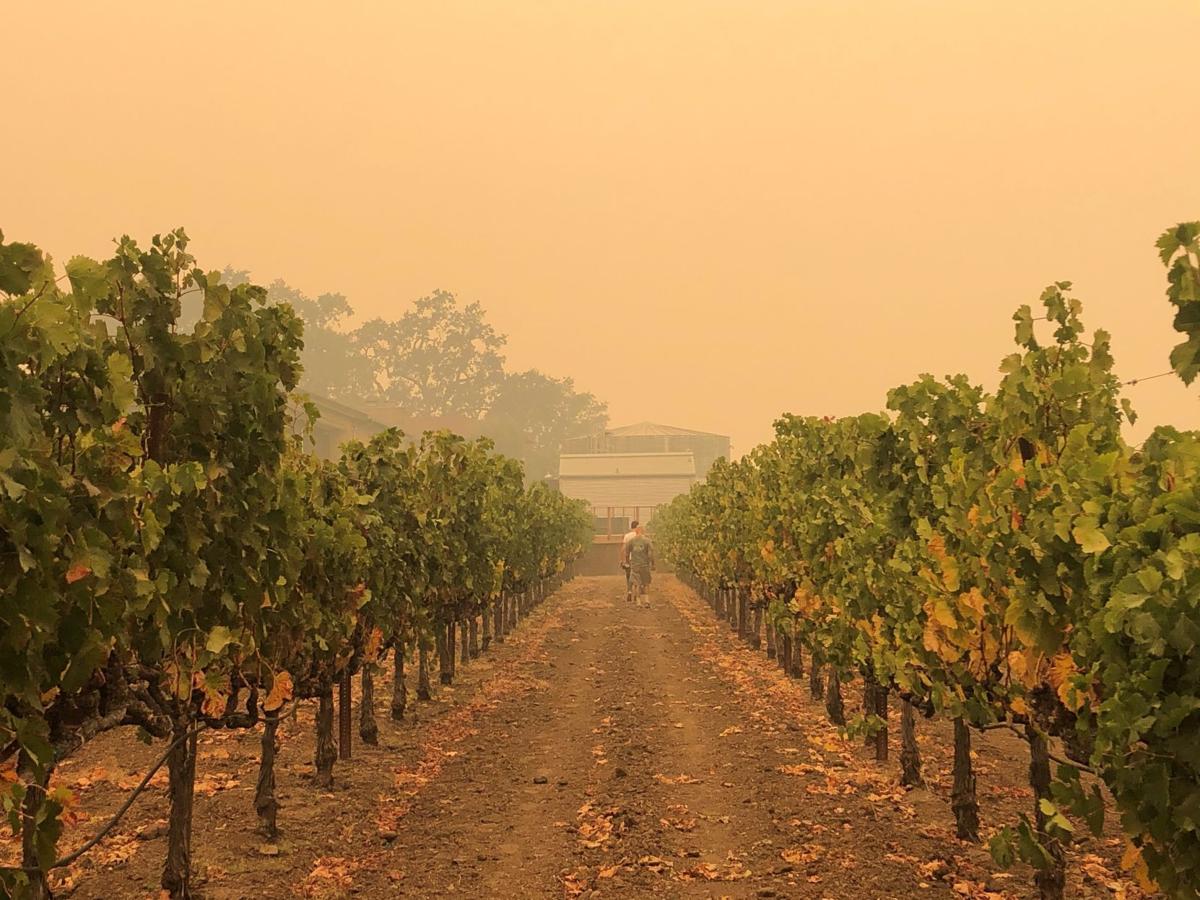 The smoky skies caused by the Glass Fire.

“It was already a tough year with the closures,” said Chris Madrigal, owner of Madrigal Family Winery in Calistoga. Covid-19 had caused him to shut down his Sausalito tasting room, and he was conducting up to 25 Zoom tastings a week.

He didn’t know how many more hits his family-owned winery could take. Little did he know that 2020 would also find him fighting fires but, he said, “My family, friends, and community come first.”

After the LNU fires in August, Madrigal said, “I never expected another wildfire, nor that I would spend the next few days helping save homes and Bothe-Napa Valley State Park. So, imagine my surprise when I heard the rare sirens on Larkmead Lane between 4:30 and 5 a.m. that Sunday,” (Sept. 27) he said. From the kitchen window of his residence, he looked towards Glass Mountain. It was on fire from both the south and the north.

As he stepped out on the back deck for a better view, the planes appeared. He counted the first airdrops around Davis Estates and Ladera’s tasting space on Silverado Trail. He wondered if nearby friends, Gary Gielow and Tom Shamp, were OK. Madrigal called them to ask how they were doing. “They calmly replied, ‘We could use some help.’”

Madrigal and his sons, Santiago and Pierce, headed their way, joined by his friend, vineyard manager, Paul Saviez. The fire was burning in the forest about 15 feet away from the house. They sprang into action with what they had – a garden hose, pool water, and five-gallon planters, with holes in the bottom. Their action over the course of three hours saved the home until the Calistoga Fire Department arrived on the scene.

As the winds increased, the fire crossed Silverado Trail and the Napa River, burning to the right of Madrigal’s father’s home. He and Santiago hurried to this house, where they discovered ambers falling on the roof, no power, and no water.

“All we could do was bucket water out of a tank into a mini pool to keep the fire at bay,” Madrigal said. With the wind howling up the river towards Frank Family Vineyards, he thought, “We are not going to be able to stop this.” He called 911 to ask for help, to which the 911 dispatcher replied, “Sir, you know there’s fire everywhere.”

The fire would eventually jump across St. Helena Highway, racing towards Spring Mountain and Tucker Road. While checking on friends on Tucker Road, Madrigal saw the fire was nearing Bothe-Napa Valley State Park. He immediately turned his truck around and came home to collect his sons and his daughter’s boyfriend. Madrigal and the three young men returned to the park, and for about four hours, used shovels and rakes to dig a line at the park to prevent the fire from spreading.

Over the next few days, Madrigal and his team of family members and friends, which grew to about 40 strong, continued to fight the fire at the park and dig what would later result in a mile and a half of line, despite being under the threat of arrest by state park authorities who eventually arrived on the scene.

Madrigal, who has park access and water rights to Ritchey Creek, promised to leave to avoid citations and arrest, but he did not specify when. “The history of North Napa Valley is near and dear to me,” Madrigal said. “It was worth saving.”

“Help came from everywhere,” he added. It included young people he had once coached and a Facebook acquaintance, Dave Kelley, whom Madrigal had never met in person. Team Madrigal called him “the wild man in the fire.” After the fire was contained, Kelley disappeared as quickly and mysteriously as he had appeared. Madrigal likened him to an angel and nicknamed the fire line they cut “Dave Kelley Trail.”

When the situation turned for the worse and the fire neared the park’s bathrooms, Madrigal rushed to the nearby CAL FIRE Sonoma-Lake-Napa Unit Headquarters, where he interrupted a meeting of firefighters to request help. They asked if people were in trouble or if there was a fire, to which Madrigal replied, “Whichever will get you there first.” Ten fire trucks and personnel appeared to secure and maintain what team Madrigal had accomplished.

Madrigal’s family continued to support the firefighter’s efforts, cooking breakfast daily. Friends in the north San Francisco Bay transported coolers of drinks and meals to feed them, although the California State Police would try to detain them. One of those was a family cousin, who delivered 60 burritos. Madrigal tried to pay for them, but the cousin refused, saying, “It’s what we do.”

“What happened during the Glass Fire was about more than the winery,” Madrigal said. “We learned to speak firefighters’ language. We forged and healed relationships. This is a story of people helping people. The Glass Fire took away ‘the noise’ of COVID-19, life, and politics. We just came together and did it.”

In the late 1930s, the grandparents of third-generation vintner, Chris Madrigal, emigrated from Mexico to the United States to seek a farming …

Wildlife cameras have recorded deer, bobcats and a skunk returning to a charred trail.

The rise in local COVID-19 cases has not yet translated into a dramatic increase in hospitalizations, Queen of the Valley reports.

iPOKEshack brings a taste of Hawaii to Napa

Team Madrigal from Madrigal Family Winery in Calistoga pitched in to help fight the Glass Fire that burned upvalley in late September.

The smoky skies caused by the Glass Fire.