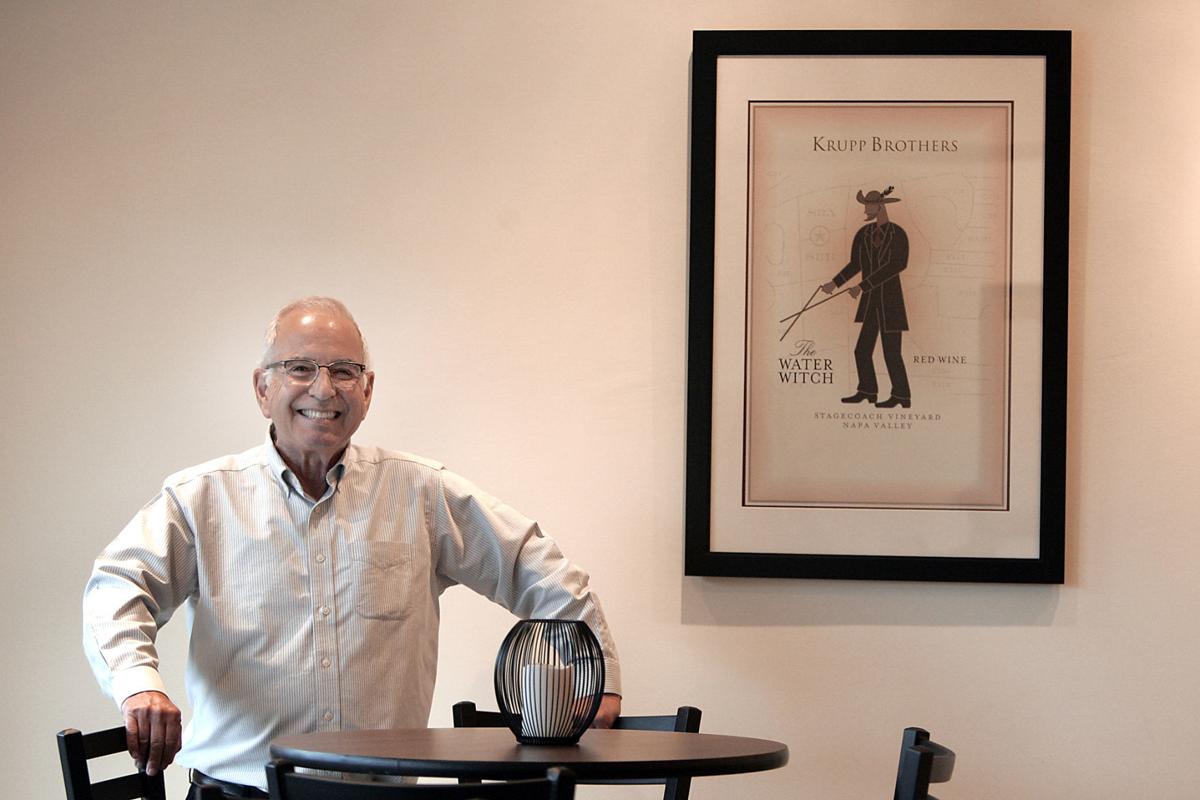 Jan Krupp, owner of Krupp Brothers Wine, stands in his downtown Napa tasting room. The framed label behind him pays tribute to the Water Witch, Jonathan Newman, who found the water that made Stagecoach Vineyard possible. 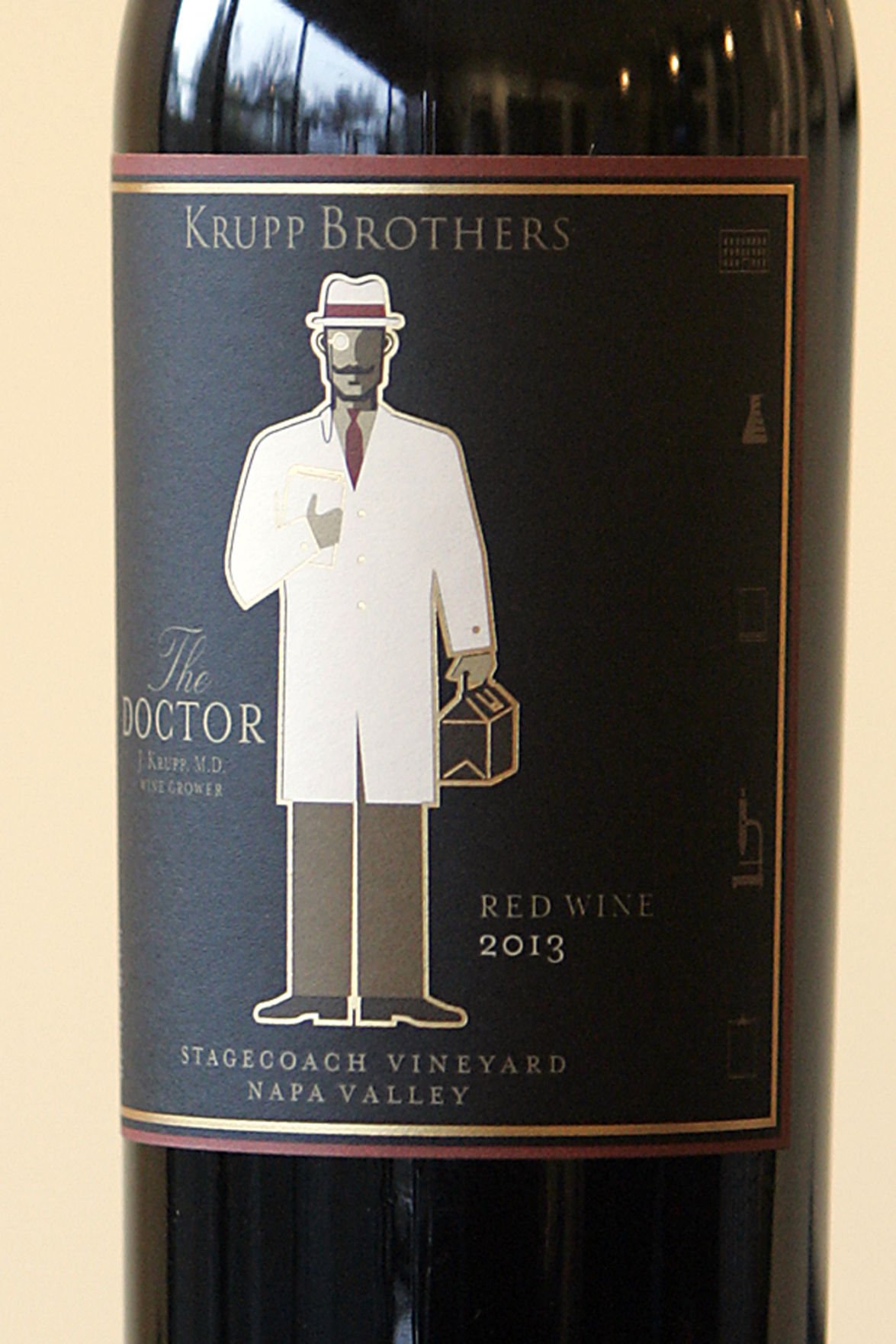 The Doctor from Krupp Brothers Wine is a tempranillo-blend red wine. 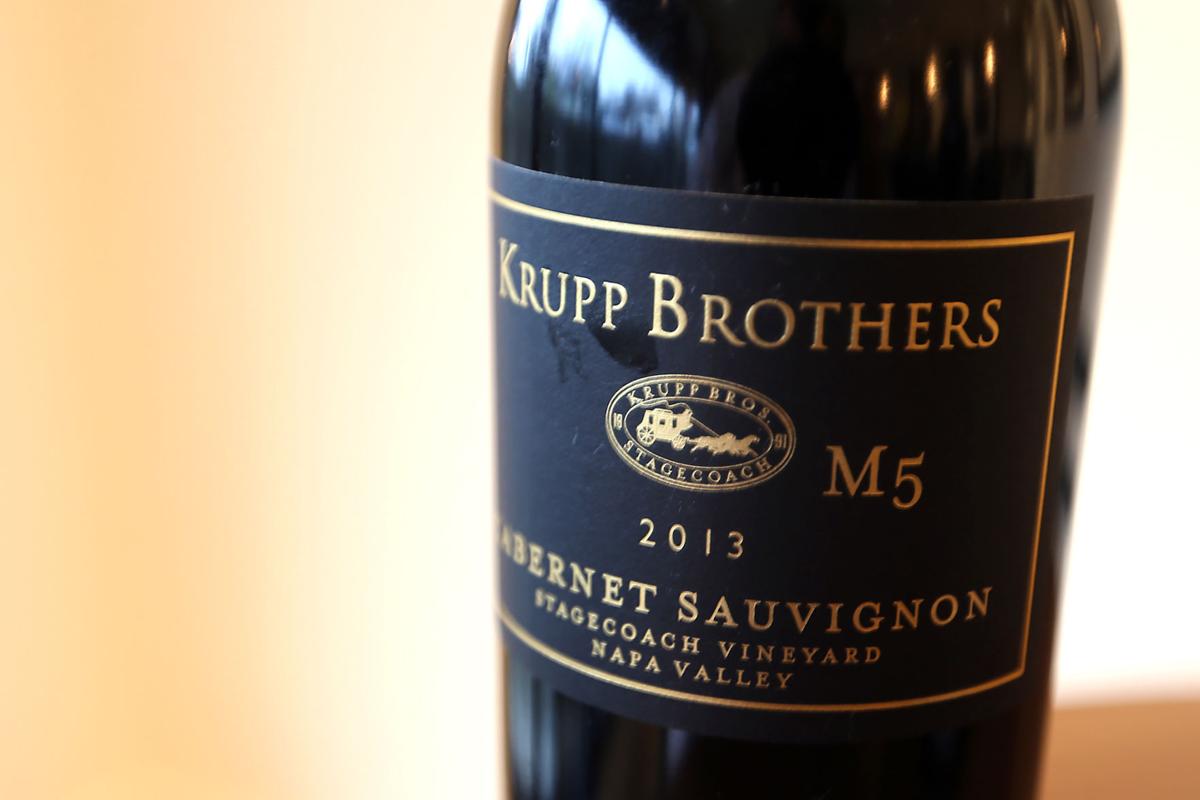 It turns out that medical training comes in handy when you are considering turning a remote mountain full of boulders and brambles into a vineyard. Especially if it’s a place that experienced grapegrowers have declined for reasons like: it’s inaccessible, without water, and inhabited primarily by rattlesnakes and mountain lions.

Here’s where the love of a challenge, the allure of unanswered questions, and a degree of cock-eyed optimism are useful. Doctors do not give up easily, Dr. Jan Krupp explained. “If you are told a case is impossible, you still will try to save someone.”

Krupp was sitting in the new Napa tasting room for Krupp Brothers wines; it’s the latest step in a wine career that began even before he contemplated the rocky hillside that would become the famed Stagecoach Vineyard that today provides grapes to 98 winery customers in the Napa Valley.

Krupp was young doctor, newly arrived from the New Jersey via Yale, to begin his residency at Stanford, when one of the professors became his mentor for wine as well as medicine. For the next two decades, Krupp became a home-winemaker, in addition to an internist. He took winemaking classes, read books, and eventually planted a small vineyard in Napa. His plan was to combine an avocation for winemaking with his medical practice.

This changed in the 1990s, when he learned about a property for sale in the Vaca Mountain range, the eastern wall of Napa Valley: 750 acres at a altitude of 1,200 to 1,750 feet on the summit the mountains.

In the 19th century, a stagecoach route had run through the property, but now no roads lead into it. German immigrants had planted grapes in the area in 1870, but since Prohibition, it had become a wild, forbidding place for farming.

Vintners like Warren Winiarski and Jess Jackson had considered, then rejected, the property. Krupp, in partnership with his brother Bart, the financial expert still living in New Jersey, bought it and spent the next decade developing it. Krupp believed the mountain could produce grapes worth fighting for.

“Wine can decline from inattentive winemaking,” he has said, “but can never rise above its foundation in the vineyard.”

One of the first challenges of the project was access. Krupp negotiated with 26 neighbors, keeping lawyers busy while he forged an agreement to build a road “a couple of miles long.”

“We had 135 legal agreements for easements,” he said. “It took one year to negotiate and one month to build it.”

Year by year, he removed the brush and boulders and planted grapevines. “I think we removed about a billion tons of boulders,” he speculated. “It was my own version of Stonehenge.”

He also had to find a source of water. A team of geologists drilled down to 300 feet in five places and told him there was no water. So Krupp, the scientist, tried another idea: a water witch, one of those mysterious people who practice the ancient art of dowsing, studying the land using only a fork-shaped branch to locate sources of water that no one else seems able to find.

Jonathan Newman studied the land and chose a spot where the geologists had already been. “He told me to drill down to 450 feet,” Krupp said. “He did and we found an underground stream. That 450 feet made 4 million grapevines possible.”

Every morning, Krupp said, he was up in the fledgling vineyards. “I love everything you can grow.”

And the grapes from Stagecoach Vineyard, named for that old road through the mountains, began to sell. Today, the Krupp brothers own 1,300 acres that span Pritchard Hill and the Atlas Peak appellation. Grapes sourced from their 615 acres of vineyards sell for as much as $20,000 a ton, and the Stagecoach name is a mark of quality appearing on wines like Aaron Pott’s Her Majesty’s Secret Service’ Stagecoach Vineyard Cabernet Sauvignon or Nils and Kirk Venge’s Stagecoach Vineyard Syrah Block 1.

By 1999, Jan Krupp, having discovered that “making wine is more fun than practicing medicine,” had sold his medical practice and moved to a house in the vineyards.

The line-up of red and white wines is made today by winemaker Jay Buoncristiani. It includes Black Bart Syrah, named for Bart Krupp who makes regular visits to the vineyards from New Jersey, as well as Black Bart’s Bride, a white blend.

While they do produce single variety wines, a chardonnay, merlot and cabernet sauvignon, the blends from Stagecoach grapes are fascinating.

Water Witch, a red blend, pays tribute to the mystical dowser, who made the vineyards possible. The 2013 Water Witch is sold out, but the 2014 vintage is a blend of cabernet sauvignon, tempranillo and cab franc.

And then there’s The Doctor, sporting on the label a man in a white coat and fedora and carrying a black bag. A red blend of many grapes, like its namesake, it’s the product of a unique vision. Other blends are equally intriguing like the 2013 Veraison, named for the changing of the grapes’ colors.

Does Krupp have a favorite? It might be the flagship M5, which takes its name from Krupp’s favorite block of Stagecoach cabernet sauvignon. “It’s our most complex block,” he said. “The wines age forever. Of all of (them) this one sets my heart on fire.”

Now, all of these wines can be tasted in downtown Napa. Because “not everyone can venture up the mountain,” Krupp said, they decided a tasting room was the best solution.

Jonathan Bain, a local veteran of the wine industry, is the manager of the new tasting room, which opened last fall at 714 First St. in Napa, the former Mason Cellars tasting room, not far from the Oxbow Public Market and the CIA at Copia.

Guests can taste through the limited-production wines, chatting about them with Bain or the doctor himself, who often drops by the tasting room, a snug space with casual, elegant simplicity, and a focus on the wines.

But more often than not, Bain confides, Krupp is to be found up in the Stagecoach vineyards. “I will get calls from him up there early in the morning,” Bain said with a smile.

After years of living up on Stagecoach land, after his wife’s retirement, Krupp said they decided moved down into the valley, a little closer to civilization. “But I still go up (to Stagecoach) every day,” he said. “Even when I’m not working, just to hike or bike or watch the wildlife.”

There are foxes, he said, wild pigs, wild cats, “and more golden eagles than you’’ see most places.”

Meanwhile, the doctor who saw possibilities no one else could see is thinking of new projects.

“A winery,” he said. “I think we will be looking to buy for a winery.”

It was a cold rainy morning when I sat down with Dr. Jan Krupp and Jonathan Bain to taste the mountain wines of Krupp brothers. They had set u…

Jan Krupp, owner of Krupp Brothers Wine, stands in his downtown Napa tasting room. The framed label behind him pays tribute to the Water Witch, Jonathan Newman, who found the water that made Stagecoach Vineyard possible.

The Doctor from Krupp Brothers Wine is a tempranillo-blend red wine.