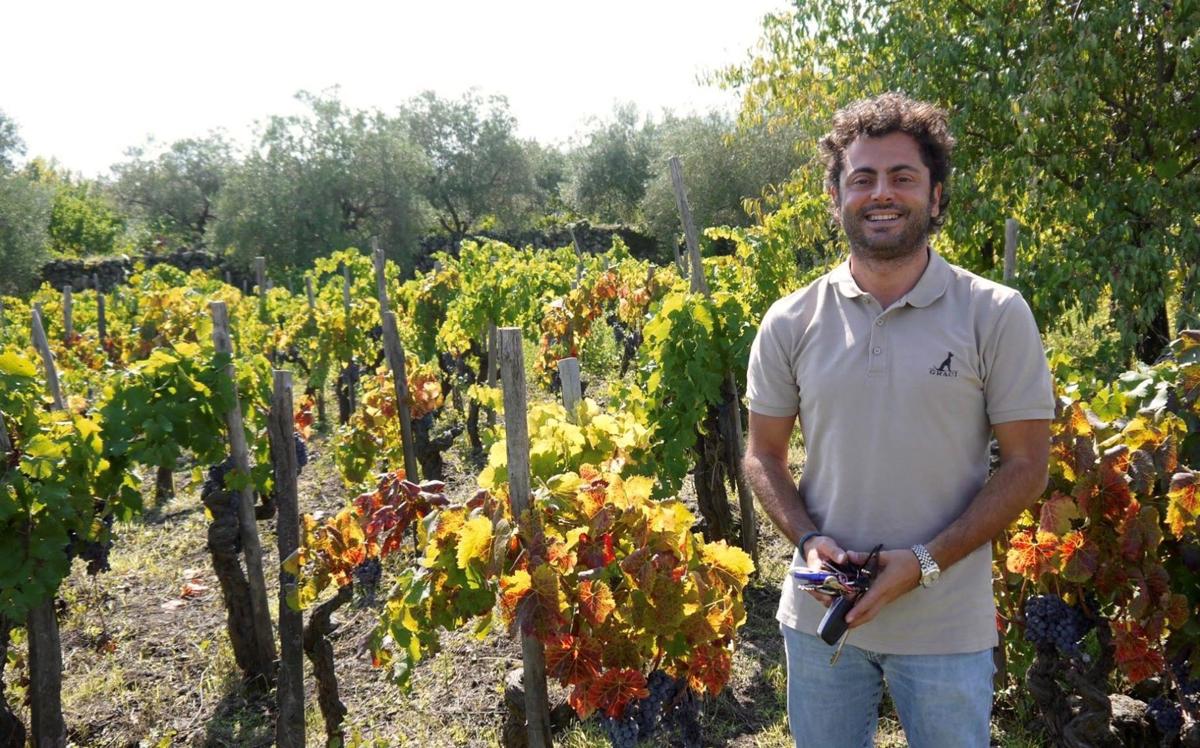 Alberto Graci of Graci Winery on Siciliy is enthusiastic about the potential for Mt. Etna’s indigenous grapes. 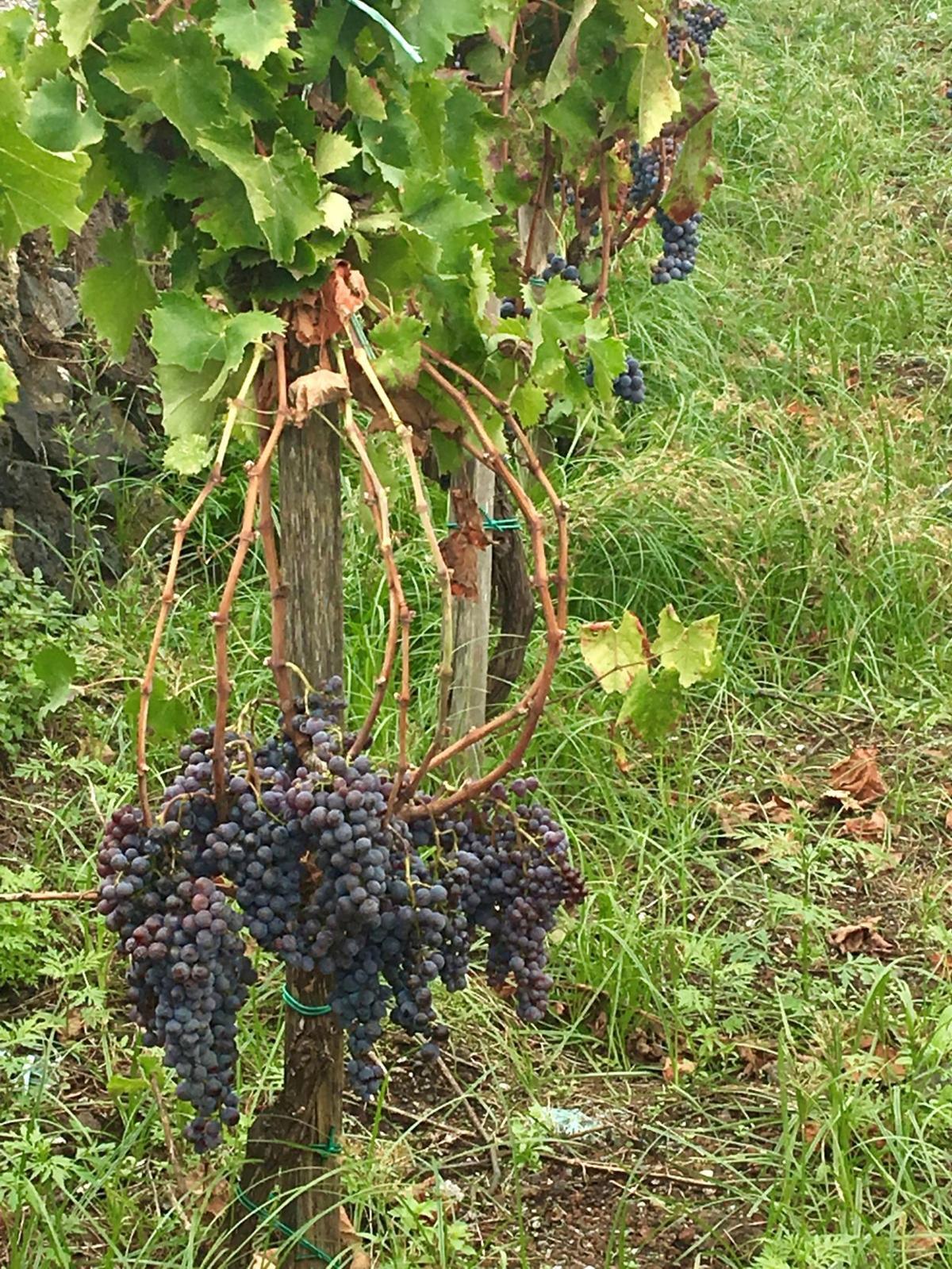 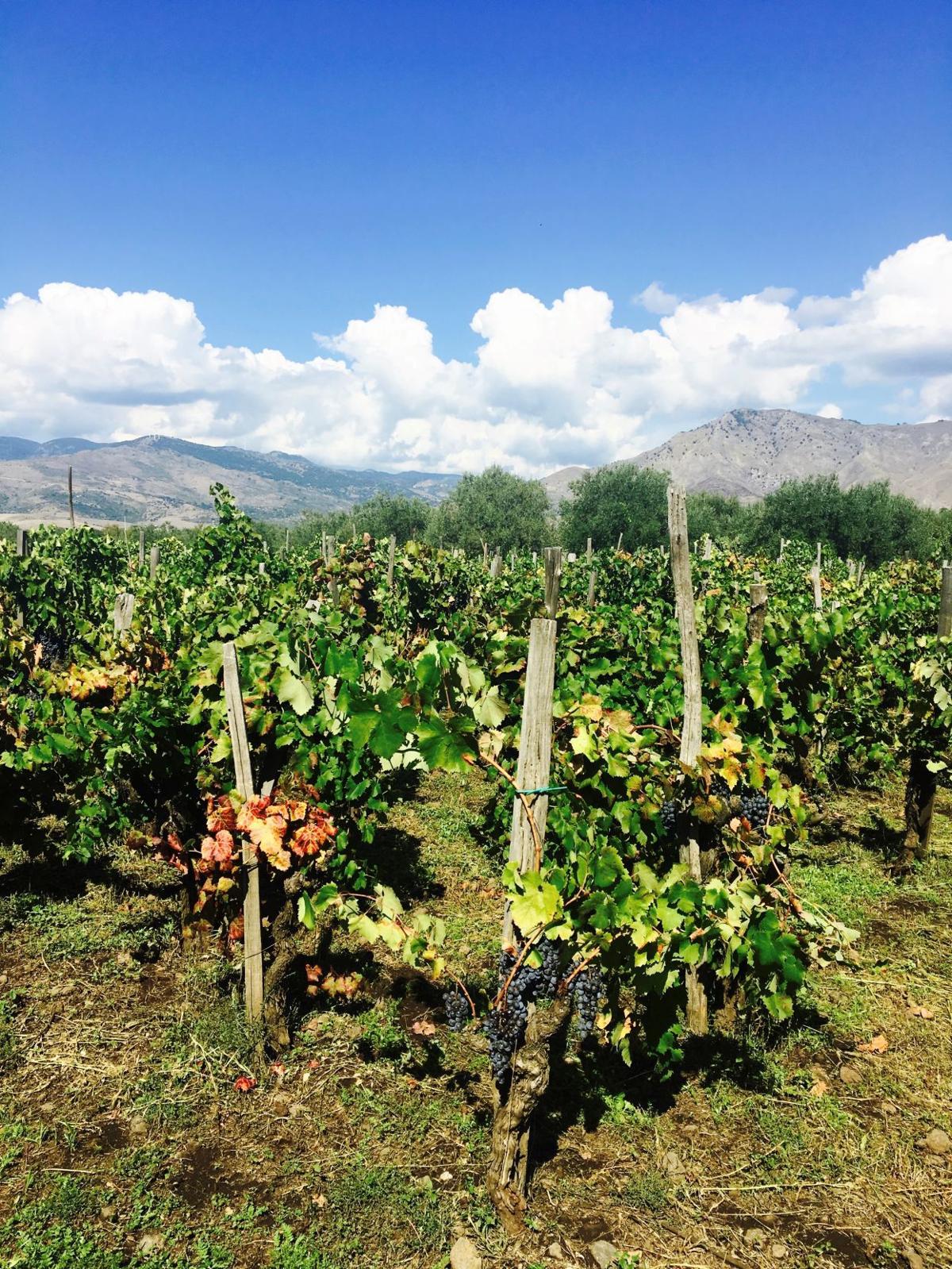 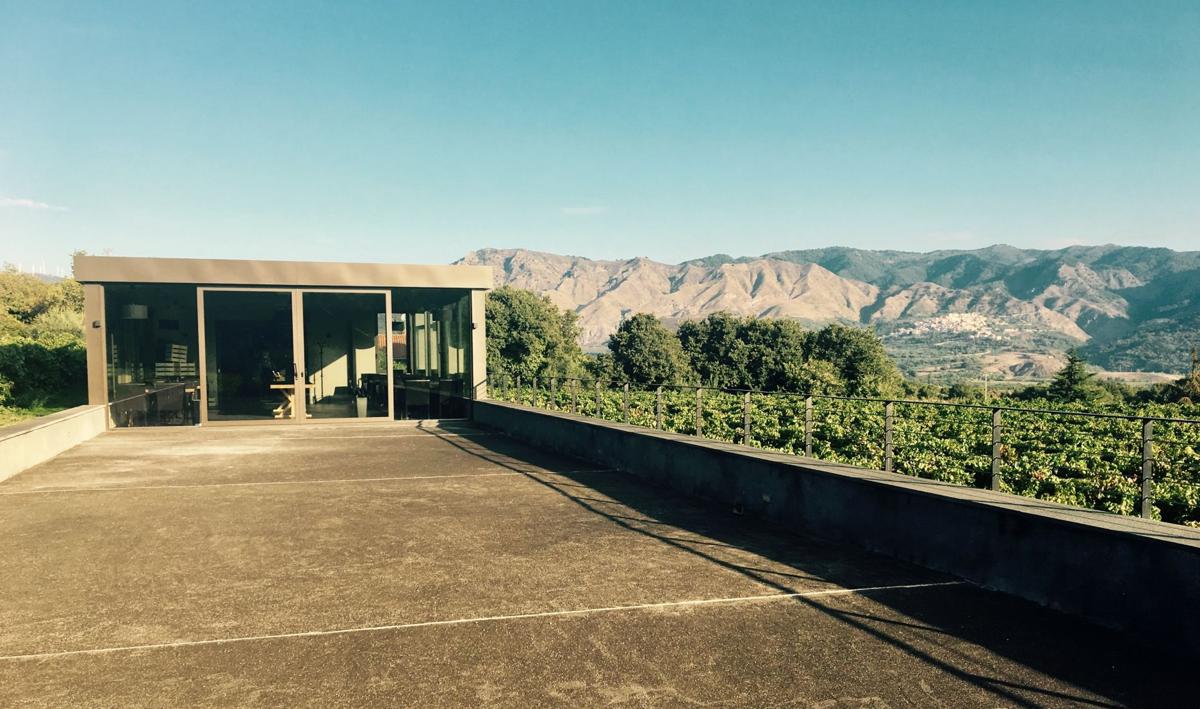 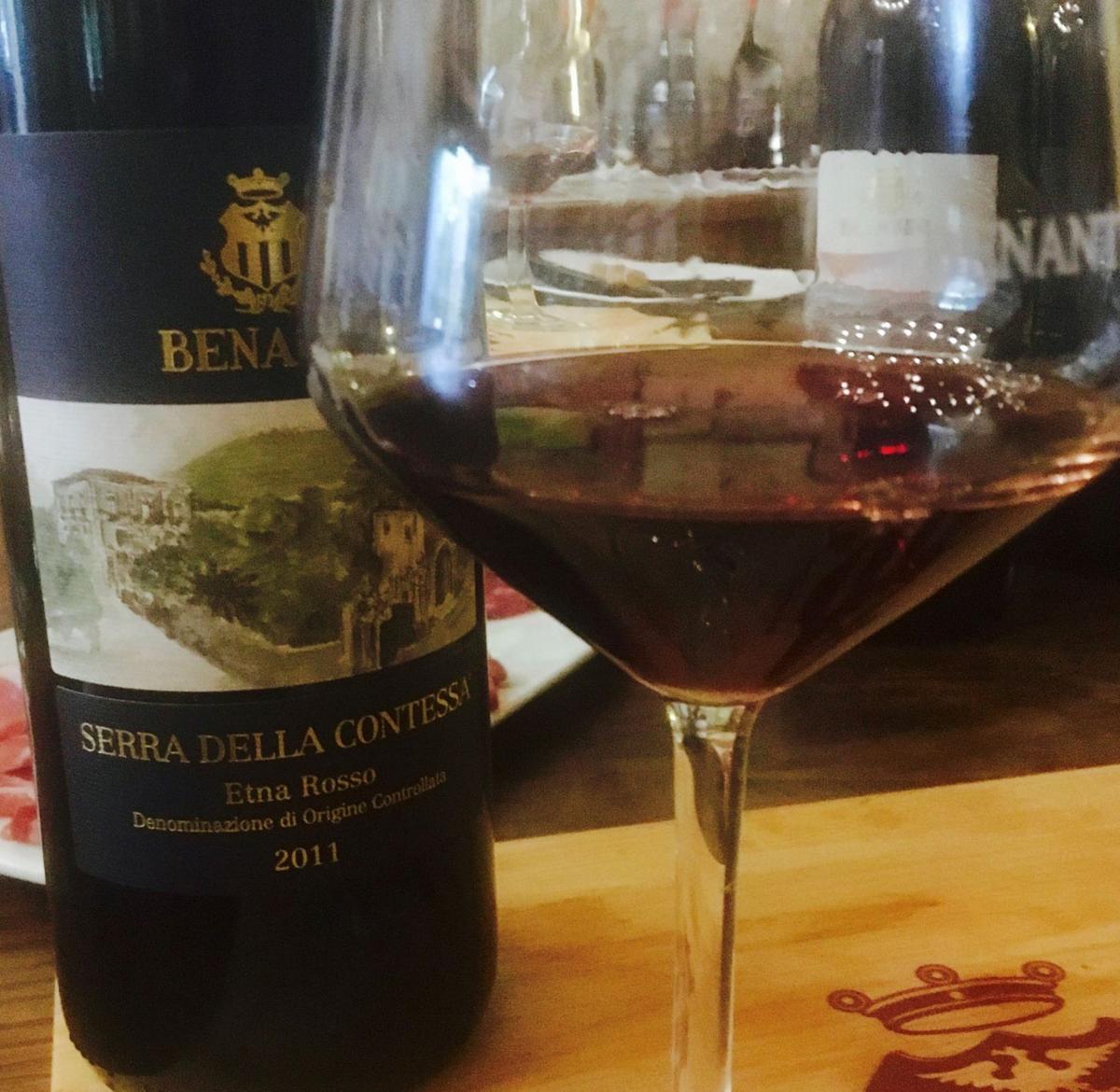 A tasting at Benanti vineyards in Viagrande, Sicily takes place both inside and outside.

The windshield wipers could hardly keep up with the attack of the pummeling rain, and I could barely see through the glass as I slowly inched my way along the deserted country road at dusk.

I finally made out a small arrow-shaped sign on the right side of the road and came to a complete stop in front of it, trying to read it between wiper strokes. I was almost sure that it said “Firriato,” and so I followed the arrow’s direction and turned onto a long narrow road, through an open gate, and eventually climbed a steep natural stone drive up to what looked to be a small village.

My mission here: To explore the Etna DOC (Denominazione di Origine Controllata) wine region and to find out what was percolating on Mt. Etna, other than the still-active volcano.

I could see a courtyard and a ground-lit path on the other side of it, leading through vineyards to an elevated spaceship-like structure, glass walls proudly displaying the inside of a streamlined tasting room begging for my approach. Comfortable in the warmth of the tasting room, I ordered a flight of their wines: Firriato’s Etna Bianco DOC, Etna Rosato DOC and Etna Rosso DOC. It was my first tasting of the local wines, and I had waited to try them until I was on Mt. Etna.

I’ll skip right to my favorite part of the tasting: Etna Rosso DOC. The Etna DOC correlates to a region in the northeast of Sicily, a crescent-shaped area that wraps itself halfway around Mt. Etna. Etna Rosso consists of Nerello Mascalese and Nerello Cappuccio grapes indigenous to the area and often grown on vines that are 100-plus years old, vines miraculously saved from the Italian phylloxera of the late 1800s to which so many Italian vineyards fell victim.

The small, round grapes with thick, almost black skins, make unmistakable Burgundian-style wines often compared to pinot noir. On Etna, they are grown at high altitudes and cultivated with the alberello (“small tree”) training system to keep each vine’s grape yield minimal and allow for maximum flavor expression.

One might assume that the roots of these vines would need to be exceptionally hearty to grow in the hardened lava of Mt. Etna, but the opposite is the case. The porosity of the lava rock and soil make it easy for vines to penetrate. And vines grown in this lava earth give their grapes a definitive mineral flavor unique to volcanic regions.

Minerals, climate, and the Nerello grapes combine to produce wine that has wine critics cheering. Three of the winemakers best utilizing the ancient vines and indigenous grapes of Etna DOC are Graci, Cantina Benanti, and Tenuta Delle Terre Nere.

At the Graci Winery in Passopisciaro, Sicily, I spent some time with the owner, Alberto Graci, walking his Contrada Arcuria vineyards and touring the old wine-making apparatus still on display but unused, at his newly modernized winery.

Graci is so enthusiastic about the potential for Mt. Etna indigenous grapes that he became the vice president of the Consorzio di Tutela dei Vini Etna that covers 300 hectares of Etna DOC. He shares challenges and new ideas with his fellow Consorzio members so that they can — as a group — produce higher-quality wines. He tends and nourishes this local association of Etna wine makers with the same sort of care that he heaps upon his grapes. And that care should bear fruit; Graci’s wines have won acclaim from the world’s top wine connoisseurs (93 points. Wine Enthusiast, Graci Etna Rosso DOC, 2014).

“Cabernet is to John Wayne as [Nerello Mascalese] is to Marcello Mastroianni. Cabernet has a strong personality, open, easily understood and dominating. If cabernet were a man, he would do his duty every night in the bedroom, but always in the same way. [Nerello Mascalese], on the other hand, would be the brooding, quiet man in the corner, harder to understand but infinitely more complex.”

While the Etna DOC fan focuses on the Marcello Mastroianni grape, most winemakers combine it with its cousin, the Nerello Cappuccio. Nerello Mascalese is the wine’s dominant partner since it must be at least 80 percent of the blend to qualify as Etna DOC. Wines made with Nerello Mascalese have a dark red fruit character with herbal and mineral notes. Full-bodied and sweet, Nerello Cappuccio adds a bright ruby color to the blend. The combination of the two produces wine with structure and elegance, the hallmark of Etna DOC wines.

By the way, if you have a chance to visit the Benanti vineyards in Viagrande, Sicily, take it. Part of the wine tasting takes place at a wooden table set in the middle of the vineyards. Another portion tours you through the former duke’s sitting room and inside the old pressing room. The final tasting is inside the main house at a dining table filled with cheese, olives, honey, and charcuterie, every detail perfectly orchestrated and a great backdrop to their excellent wines.

And, let’s not forget about the vineyards themselves. Throughout the Etna region, Nerello Mascalese and Nerello Cappuccio grapes grow interspersed together in non-linear vineyards. This growing structure makes for breathtakingly beautiful terrain, like Benanti’s vineyard on an old Roman cemetery and Tenuta Delle Terre Nere’s untamed hillsides. Now when I think of Etna vineyards, what comes to mind are the Nerellos, with their little black grapes hanging like jewels from ancient, gnarled vines, growing in the shadow of a percolating volcano.

Alberto Graci of Graci Winery on Siciliy is enthusiastic about the potential for Mt. Etna’s indigenous grapes.

A tasting at Benanti vineyards in Viagrande, Sicily takes place both inside and outside.