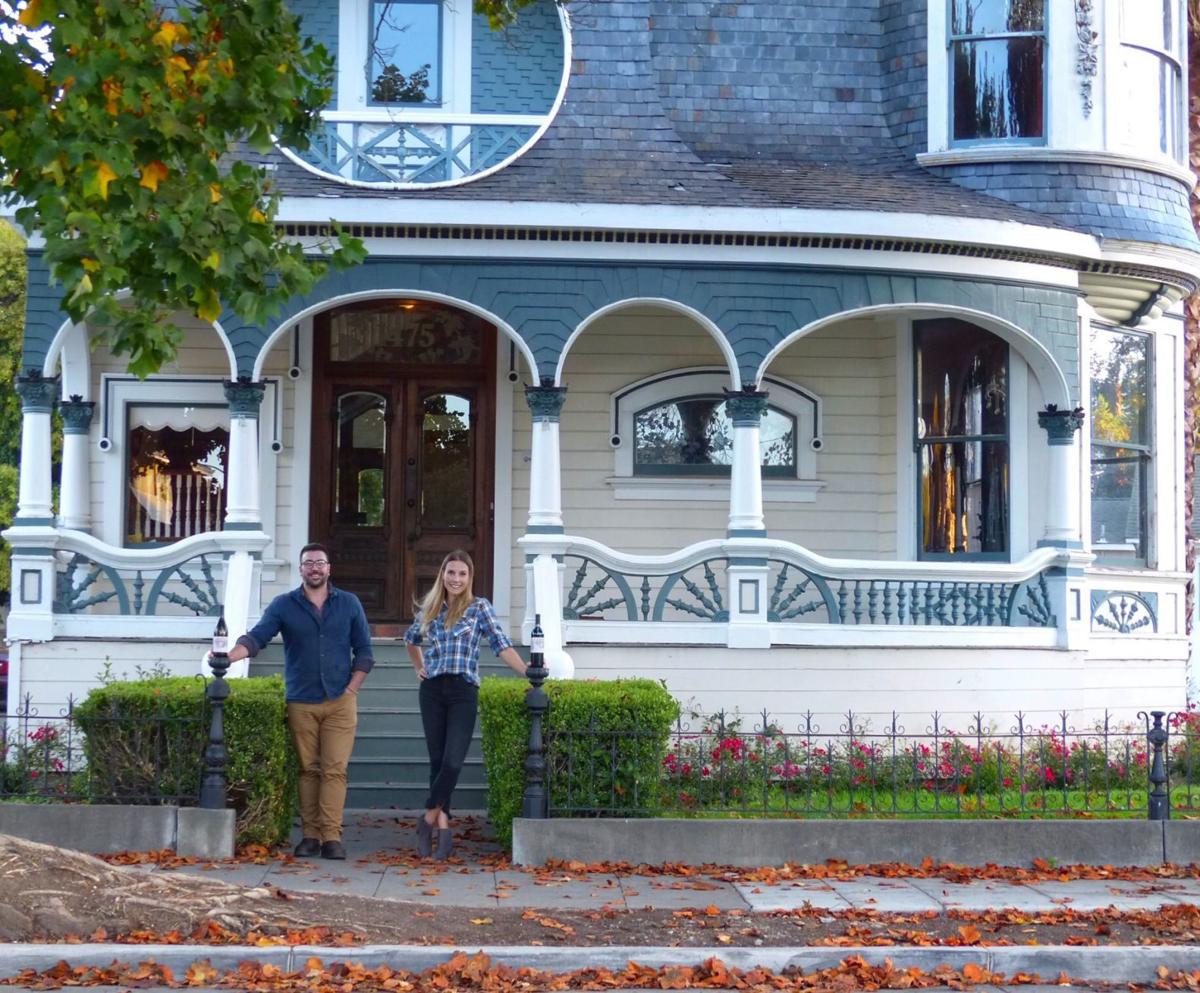 Katie Migliavacca and Vincent Traverso, shown in front of the Migliavacca mansion in Napa, are reviving her great-great-grandfather Giacomo's wine brand. 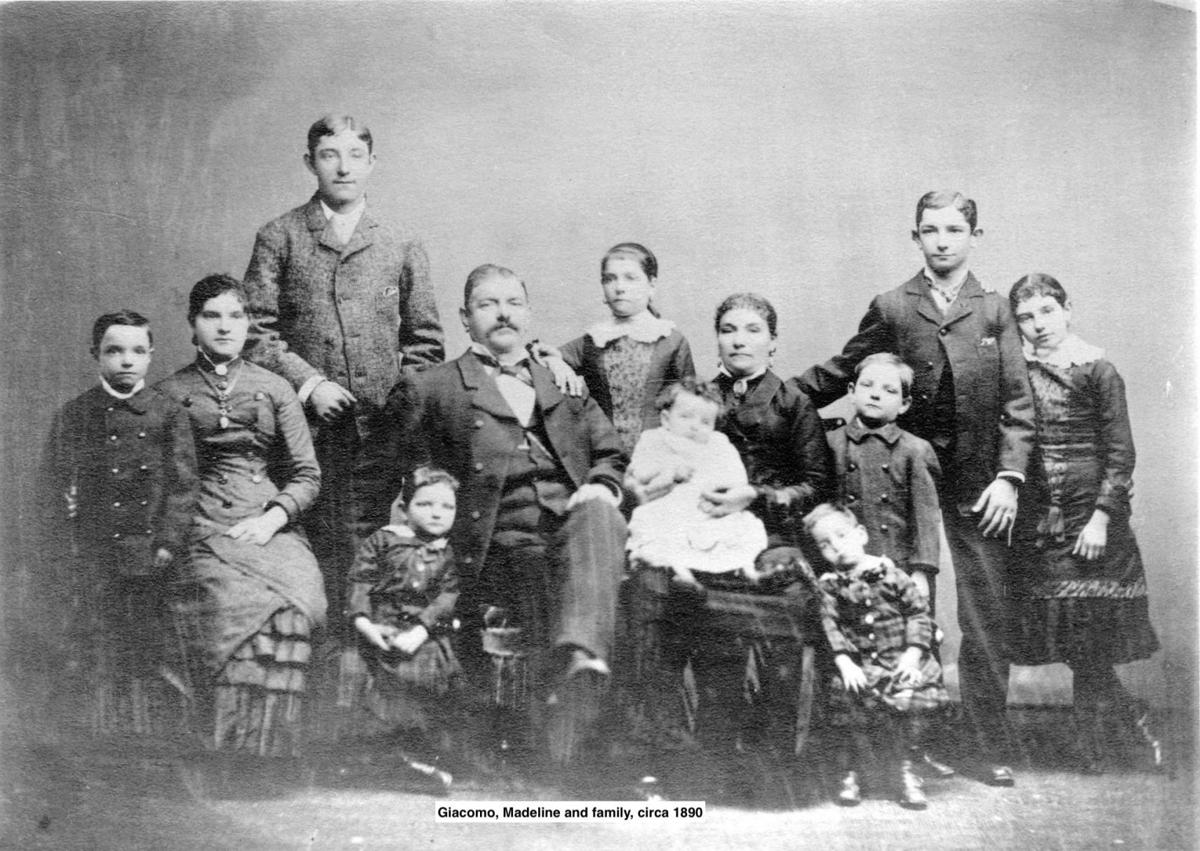 Giacomo and Madeline Migliavacca with their 10 children, in 1890. 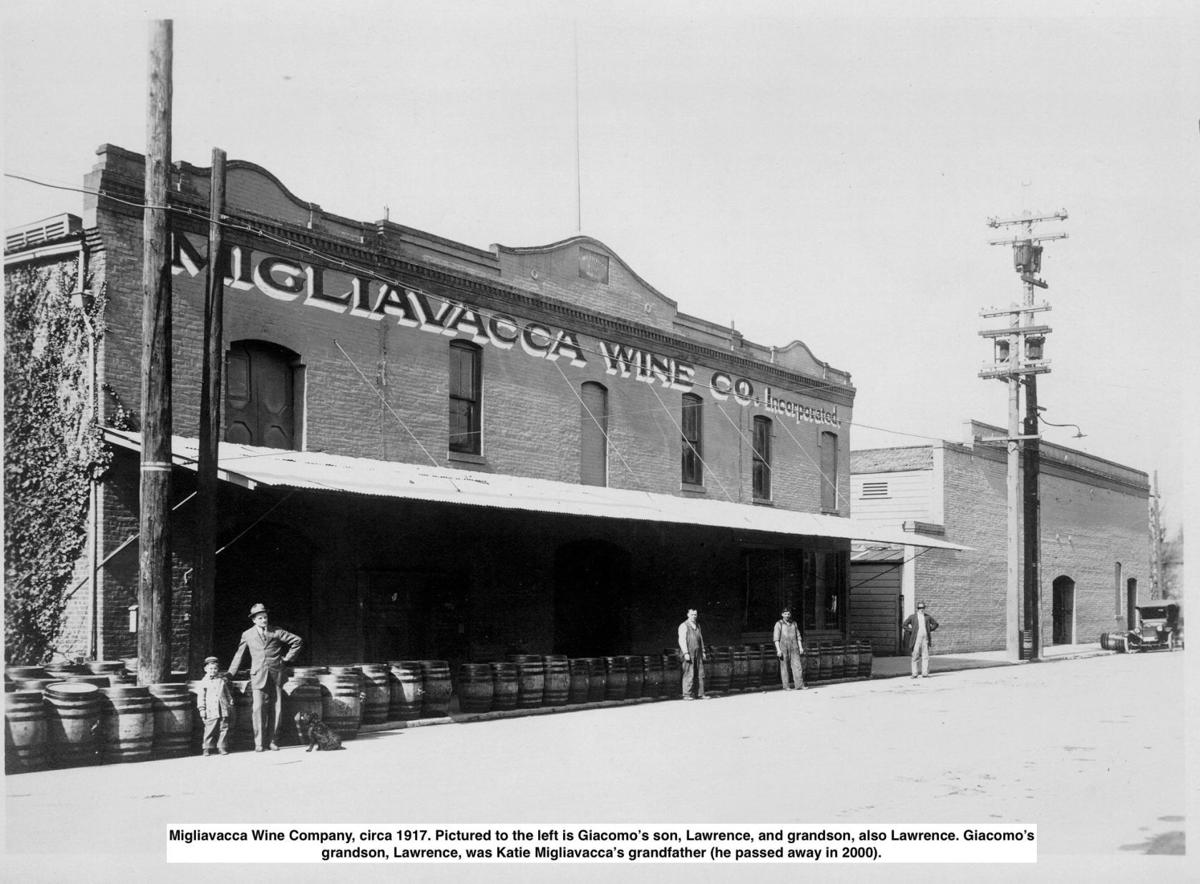 The Migliavacca Wine Company in Napa in 1917. At left is Giacomo Migliavacca's son Lawrence and grandson, also Lawrence. The younger Lawrence, who passed away in 2000, was the grandfather of Katie Migliavacca. 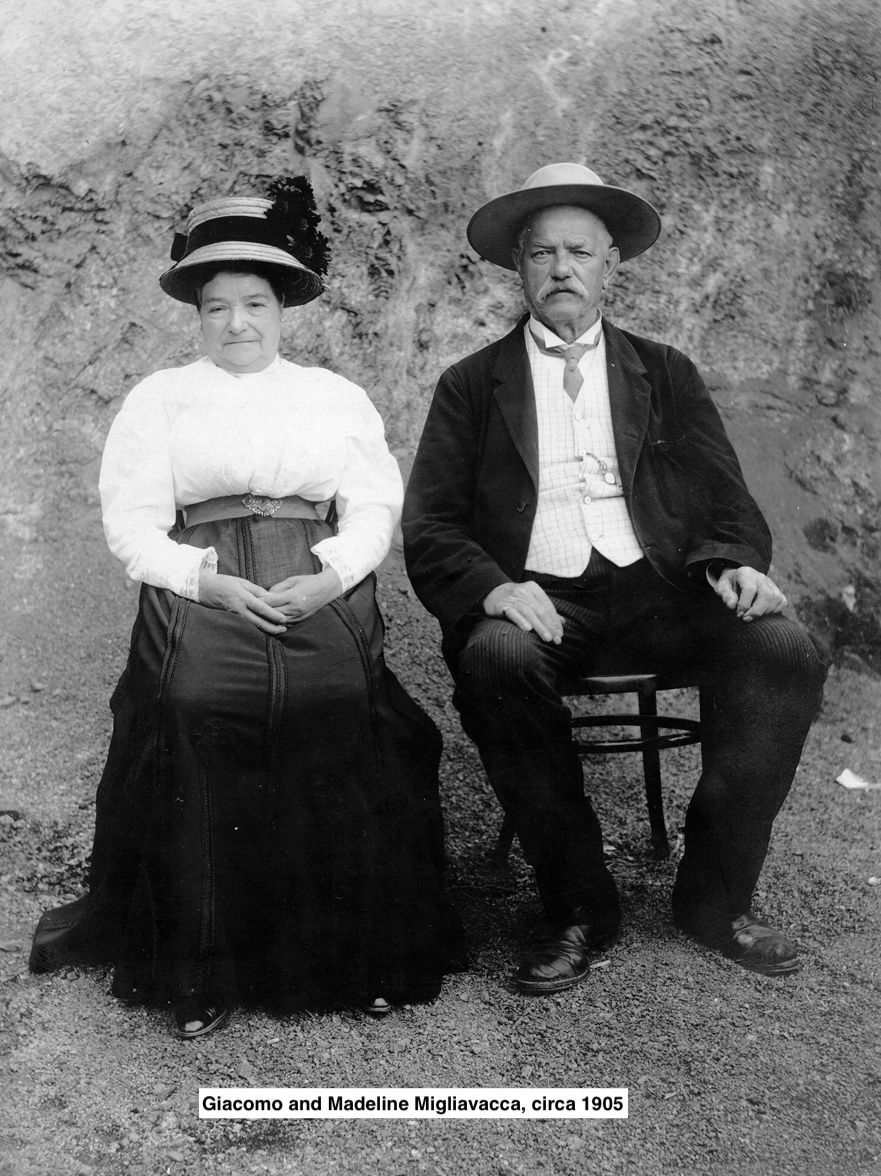 Giacomo and Madeline Migliavacca, circa 1905. 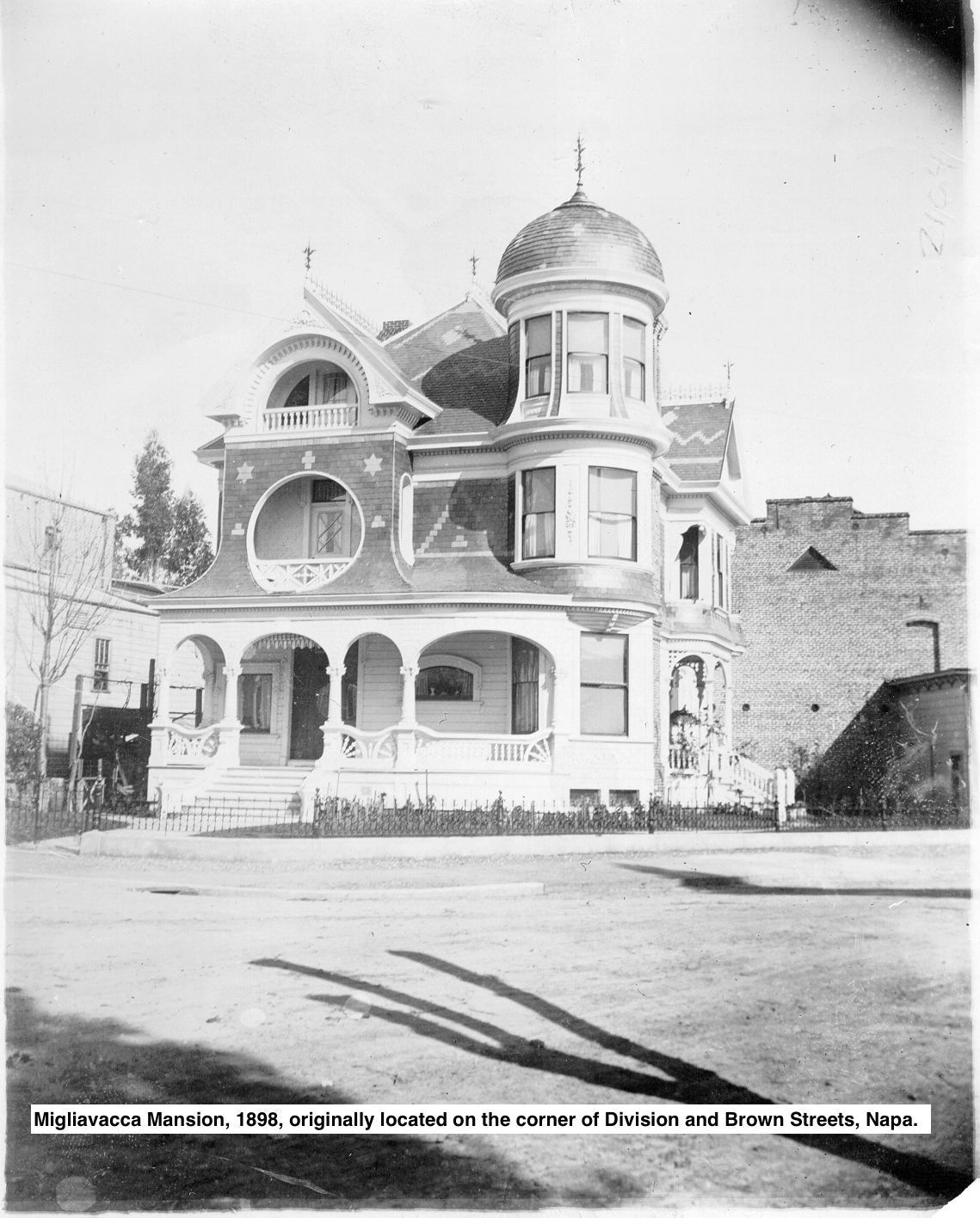 The Migliavacca mansion, built in 1898, originally stood at the corner of Brown and Division streets in Napa.

The Migliavacca Wine Company is no longer merely part in Napa Valley’s history. It has been officially revived by Katie Migliavacca and her business partner, winemaker Vincent Traverso.

The new Migliavacca wines are being made in small lots and will be sold only through a website, launching on May 3, but this marks a renaissance of a significant part of the Napa wine story.

Katie Migliavacca found the inspiration for this project in the life story of her great-great-grandfather, Giacomo Migliavacca.

Born in Pavia, Italy in 1833, Giacomo was formally trained in viticulture at the University of Pavia. Before immigrating to America, he worked at his father’s cordial and liqueur manufacturing company in Pavia.

By the 1860s, Migliavacca had arrived in Napa where he briefly worked in the grocery business. Giacomo also began to make wine during this time period and founded his Migliavacca Wine Company in 1866. Three years later, he received the first U.S. patent granted to a Napa County resident for his “Wine Bottling and Corking Apparatus.”

About two decades later, in 1887, he significantly expanded his viticulture operation with the construction of his downtown Napa winery complex. It occupied the site of the present-day Napa County Library property bounded by Coombs, Division, Brown and Fifth streets.

The Jan. 19, 1894 Napa Register provided more details. “One of the most extensive and largest manufacturing enterprises in Napa. The cellars cover nearly a block....Giacomo Migliavacca’s ambition is, and always has been, to create for his wine a reputation second to none.”

Also located on this site was the Migliavacca home. This Queen Ann-style residence was built in 1892 at the cost of $7,800. In the 1970s, the house was lifted from its original foundation onto a platform and “parked” along the riverbank to make way for the then-new library building. The mansion was eventually moved to its current location at the corner of Fourth and Even streets.

During his lifetime, his business ventures created great wealth for him and his family. In 1911, at age 78, Giacomo passed away in Napa leaving behind his wife of many years, Madeline, and their 10 adult children.

Four of their sons — Henry, Joseph (AKA Guiseppe), Lawrence (Katie’s great grandfather) and Sero — continued the family wine business until Prohibition began in 1920. At that time, they changed the business product and name to Colonial Grape Products Company, a wine grape juice company. They eventually sold it to an outside interest. The business complex burned down in July, 1924.

Although Giacomo’s story is impressive, the revival of his winery enterprise has its own history that began during Katie’s childhood. She said, “I remember looking at Giacomo’s portrait, pocket-watches and walking cane in my family’s home and wanting to know more. But, what first caught my attention was the bottle of Migliavacca Wine Company wine, and especially its label. It was so cool. I really wanted to know everything about Giacomo, his life and company.”

This fifth-generation Napan was so determined to fulfill that quest she made her mother drive her to St. Helena’s wine library. There, her ancestral roots began to unfold.

“Giacomo was such an important man in Napa’s early development and history,” Katie said. “It was so exciting to discover he not only had his winery and beautiful mansion but also the big stone commercial building (formerly at First and Brown Streets) and a second commercial block (still set along First Street near Randolph Street) as well as a financial firm.”

Katie said she had one nagging question — “I couldn’t understand why no one in the generations before me ever tried to revive Migliavacca Wine Company. So, I decided someday I would be the one to do just that.”

Katie continued, “The Migliavacca Wine Company revival is about history and heritage. Yes, it is about my family, but it is also about Napa and its history. So many people don’t know Giacomo’s or his winery’s story. When I tell them about Giacomo, his story, wine company and commercial buildings, they are blown away. My great-great-grandfather was an integral part of the fabric of Napa. Reviving Migliavacca Wine Company celebrates both my family and hometown’s legacies.”

Her dream ebbed and flowed as she pursued her Bachelor of Science degree in business administration and established her career in the property management field. However, in early 2016, her dream was reawakened with the discovery of a Napa Valley Register article about Giacomo and his downtown Napa winery.

In a matter of weeks, that problem was solved during a weekend at Lake Tahoe. Katie nearly turned down an invitation to join a friend and colleague, Pad McGinnis, his girlfriend and others for a get-away.

“The first person I met there was Vince,” Katie said. “After he read the Register piece, his love of history was obvious. Vince described my ancestors as Napa royalty and was very excited about the idea of reviving Migliavacca Wine Company.”

That meeting launched the renaissance of the family business 150 years after its original founding in 1866.

Over the past three years, Katie and Traverso have rapidly moved forward to transform her—now their—dream into reality. They even have a small office in the Migliavacca mansion.

“We are so grateful to the property owners for making this happen,” said Traverso.

Katie added, “It feels right, totally right. It feels like home to be there.” Also, shortly after formerly establishing their LLC partnership, they harvested and crushed their first vintage of Sangiovese in 2016 from Atlas Peak vines.

All of this was and is done on a shoe-string budget funded primarily by Katie.

The winemaking was dependent upon Traverso. Born in Napa, Traverso grew up in the Deer Park area near St. Helena. Before leaving Napa Valley to work overseas for 10 years, Traverso had never worked in the local wine industry. Yet, in preparation to return home, Traverso chose winemaking as his new field. He received a degree in enology and viticulture through the Vinifera EuroMaster E.U. program. He attended Montpellier Sup Argo Bordeaux Sciences Argo in France and Universita di Verona in Italy to fulfill the program. With his degree in hand, Traverso returned to the Napa Valley.

“When Migliavacca Wine Company landed on my plate, it was like a big bag of candy for me because of its history and very long Napa Valley roots,” he said. “As stated before, I love history! I feel honored to contribute to a story with such roots, such a history.”

“My goal is to stay true to Giacomo’s legacy,” Traverso added. “That’s why we decided to produce Italian varietal wines for our first release to honor his Italian roots. From his immigrant past, he really, really made an indelible mark on Napa. My greatest thrill is how many people still recognize the Migliavacca name. It’s really nice that Migliavacca survived the ages. Authenticity never goes out of style.”

Since the 2016 harvest, Traverso has been creating other wines for the company. “I am very excited for our wines to be released. It will be a sign of Migliavacca Wine Company’s return as an important presence in Napa and Napa Valley.”

“We’ve experienced the normal hick-ups along the way. We’re very thankful for the help of a lot of people like Kirk Venge and the Bartolucci family of Madonna Estates that have smoothed out those bumps.” Traverso said. “Soon, we will have some very fine wines to share.”

When released, the small production of the premiere Migliavacca Wine Company wines will be sold in triptychs, a 2016 Sangiovese, aged for 29 months; a 2017 Vermentino aged for 17 months and a 2018 Rosato, a blend of Barbera and Petite Sirah aged for five months.

All three were aged in neutral French oak. When officially released, the first 150 triptychs will be sold at a special price of $99. For updates, additional information and to sign up for the for the approaching order reservation period notification, visit their website at www.migwine.com.

“This means everything to me,” Katie said. “I can’t believe it’s happening as it doesn’t feel real yet. I am so grateful to have met Vince and for his willingness to give his skills, talents and support to realizing my dream. Sometimes I think he is more excited and passionate about reviving Migliavacca Wine Company than I am!”

“I am so thrilled to revive this piece of Napa history, to bring it full circle,” Katie added. “I hope my great-great-grandparents, Giacomo and Madeline, are smiling with approval.”

Dan Dawson, Dan the Wine Man: Eat This, Drink That

Dan Dawson is searching the valley for great stops for food and wine.

Katie Migliavacca and Vincent Traverso, shown in front of the Migliavacca mansion in Napa, are reviving her great-great-grandfather Giacomo's wine brand.

Giacomo and Madeline Migliavacca with their 10 children, in 1890.

The Migliavacca Wine Company in Napa in 1917. At left is Giacomo Migliavacca's son Lawrence and grandson, also Lawrence. The younger Lawrence, who passed away in 2000, was the grandfather of Katie Migliavacca.

Giacomo and Madeline Migliavacca, circa 1905.

The Migliavacca mansion, built in 1898, originally stood at the corner of Brown and Division streets in Napa.