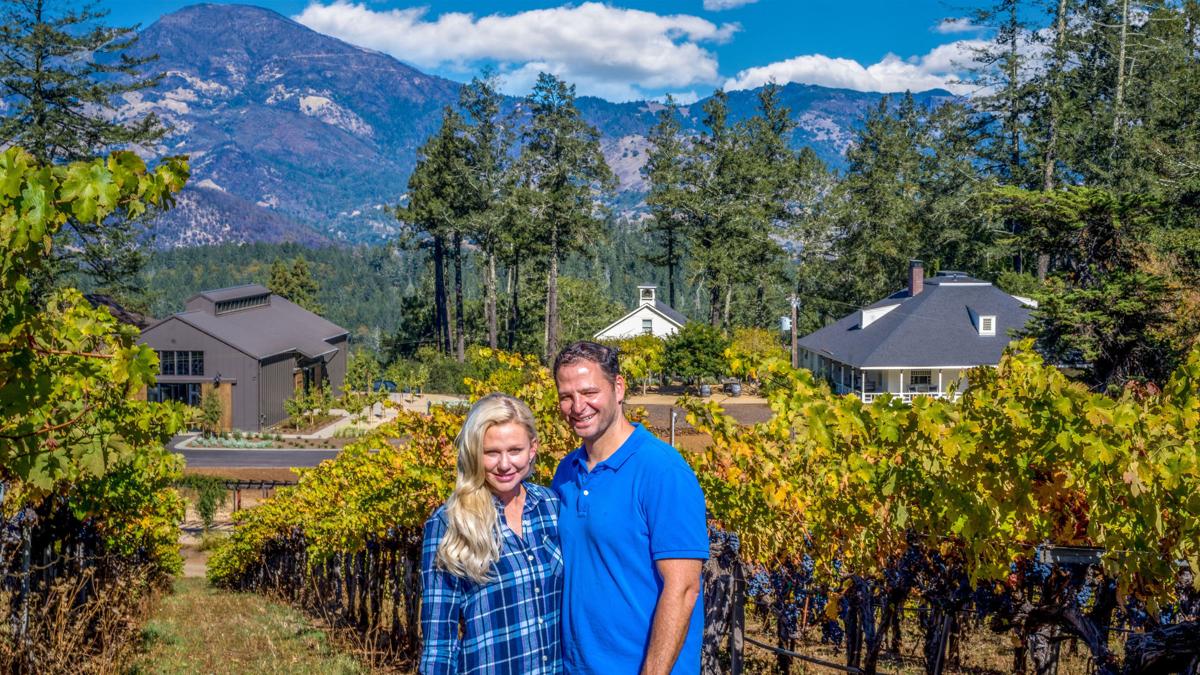 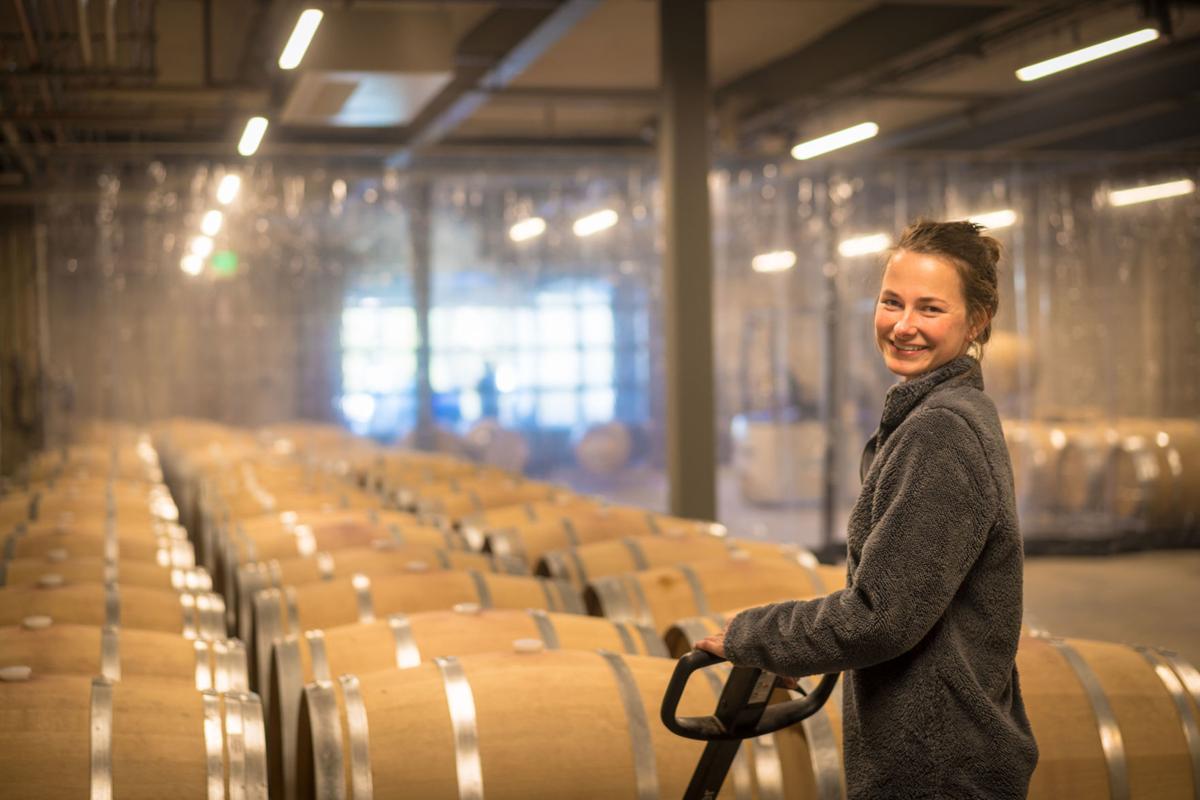 Kathleen Ward is the assistant winemaker at Theorem Vineyards. 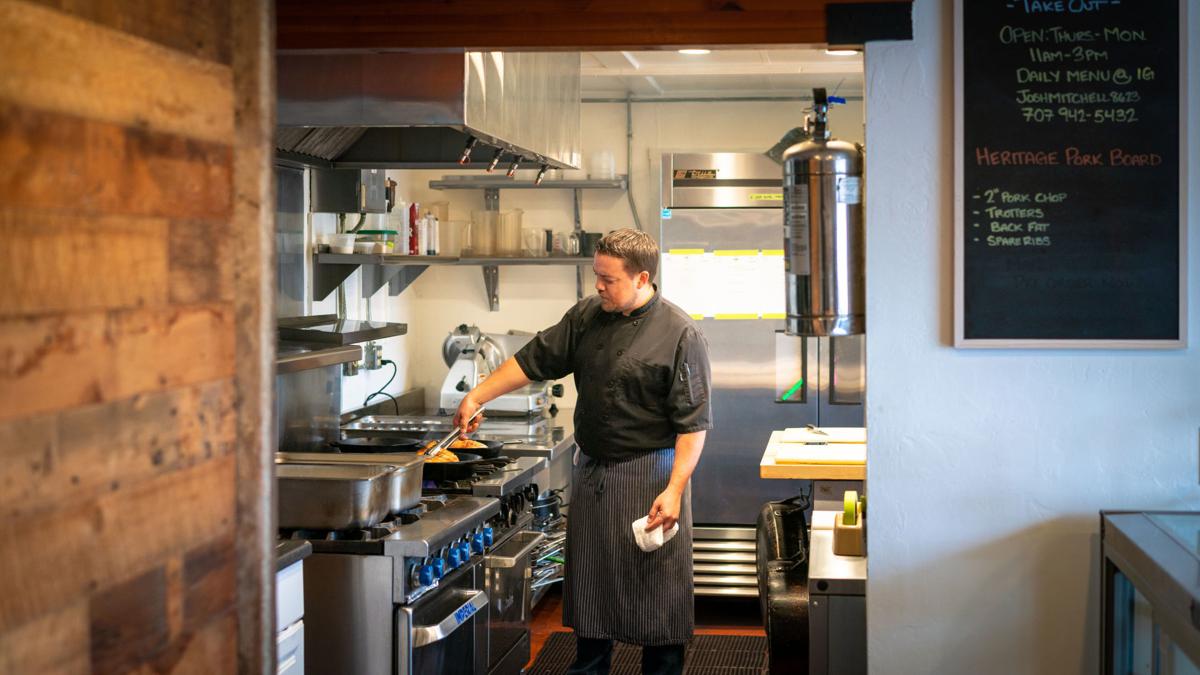 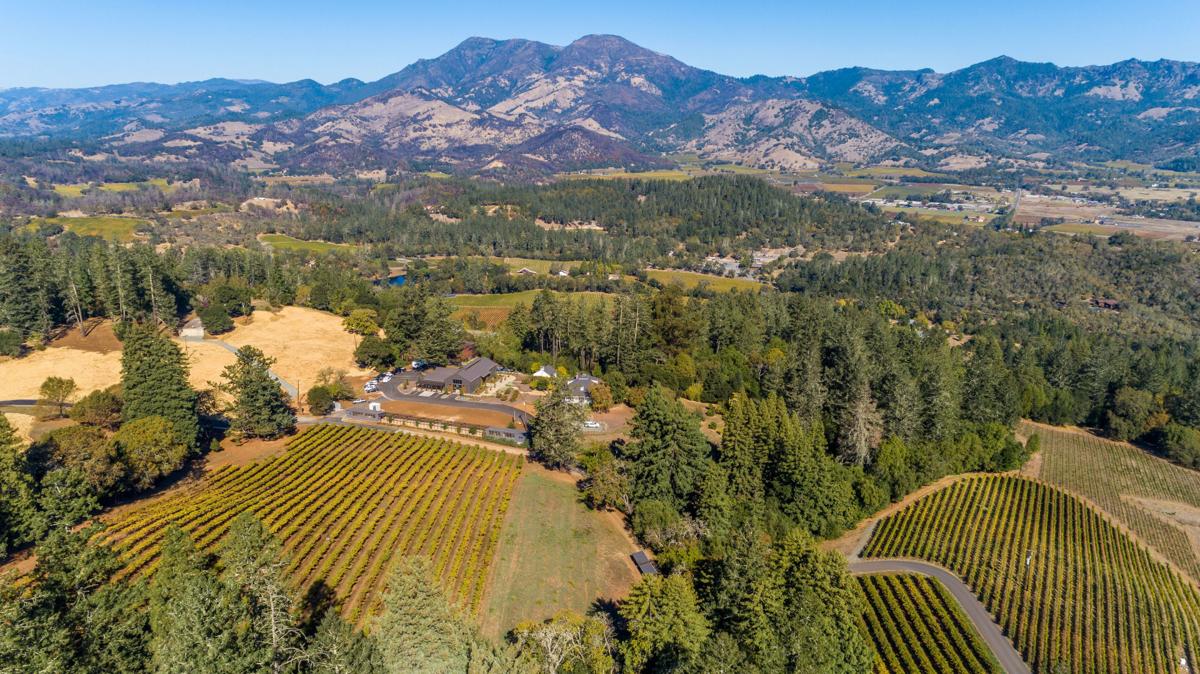 An aerial view of Theorem Vineyard and Winery, which has sweeping views of the Napa Valley, including the rocky palisades and Mount St. Helena toward the northeast.

The reasons for purchasing a Napa Valley vineyard and making wine abound, and every owner has a different story. For Kisha and Jason Itkin, it was a chance to become part of a community with which they had established a bond.

“When we first started coming to the Napa Valley, we fell in love with the beauty and how friendly the people are here,” Kisha said. “Although I think we’ll always live in Houston, we wanted something here, too. It just felt right, and when we found this property we knew it was meant to be.”

The Itkins — he a trial lawyer and she a geophysicist/chemical engineer — first came to the Napa Valley in 2008. Like many before them, they were smitten by the views as well as the lure of the vintner lifestyle, and so by 2012 they had purchased a 60-acre property in the rugged hills in the Diamond Mountain appellation just west of Calistoga.

The property had been previously owned by the Graeser family and had gone into foreclosure during the Great Recession. On-site were an abandoned rustic winery, historic structures from the late 1800s and a decades-old, 9-acre hillside vineyard of Cabernet Sauvignon.

According to public records, the Itkins expanded their wine country property holdings in 2018 when they purchased a $2.55 million,23-acre vineyard in Sonoma’s Dry Creek Valley appellation and the 34-acre Trinity Ranch vineyard that straddles the county line between Napa and Sonoma just west of the Oakville Grade.

But how does a couple (he is in his early 40s and she is in her late 30s) afford to make such a financial commitment to California’s wine country? Are the Itkins heirs to some fortune? Tech-startup entrepreneurs?

Neither of these. According to Jason, what has allowed them to achieve their success is an aversion to bullies.

“We represent people who have been catastrophically injured,” he said. “Nobody ever calls me when something good happens. When the Deepwater Horizon explosion occurred (in the Gulf of Mexico), we represented a third of the crewmembers who were on board. When something really bad happens to people, they call us and we help them get their lives back in order.”

In 2004, Jason co-founded the Houston-based law firm of Arnold and Itkin LLP. Since then, according to their website, “He has won some of the largest jury verdicts in the history of the U.S …. In the last 12 months alone, Jason has won more than $1 billion in verdicts and settlements for his clients.”

Some of the clients highlighted on the site include the families who lost loved ones when the El Faro cargo ship sank off the coast of the Bahamas, Hurricane Harvey victims and those devastated by the recent California wildfires.

“I’ve never liked bullies or people who take advantage of other people,” he said. “So it feels good to work on behalf of individuals and families who have been injured — many of whom have lost nearly everything.”

After college, Kisha did work for a time in the oil industry as a “reservoir engineer,” exploring oil wells and their potential. Since purchasing their properties, she has overseen all of the renovations and construction. She is also involved in their philanthropic efforts through the Arnold and Itkin Foundation, while at the same time she keeps up with their young daughter and builds up what might be one of the strongest winery crews in the valley.

“The quality of the team is just as important as the quality of the soil,” Kisha said. “We’ve been fortunate to have met the right people and been given good advice and introductions. We finished building the new winery at the end of 2018, and we also completed renovations and landscaping. But the whole time, every step of the way, we’ve been building a solid team.”

Led by arguably the most successful consulting winemaker in Napa Valley, Thomas Rivers Brown, the team includes Josh Clark, who oversees some of the most exclusive and well-kept vineyards in the region, and hospitality expert James Cerda, who manages operations as well as a collection of up-and-coming talent, such as assistant winemaker Kathleen Ward.

“When I first visited the vineyard and heard Jason and Kisha’s passion, I knew we could make some special wine together,” Brown said. “The soils are volcanic and the site has a ton of potential. The vineyards already here are producing excellent fruit, especially under Josh’s care. I also like that the Itkins are doing this when they’re young, which can be rare in this business because it often takes so many resources to start a project like this, which is often something people can only do after a long career.”

“Our focus is on providing our guests with a unique experience that is down to earth and comfortable but that reflects the elegance of the wines and also gives a nod to the historic nature of the site,” Cerda said.

Many of the restored structures on the site were built in the late 1800s.

“Our desire was to restore the site so that it might be here for generations to come,” Kisha said. “When we saw the property for the first time, all we saw was the potential of the old vineyard and buildings, but also the spectacular view of Mount St. Helena — and now, with most of the work completed, we are able to focus our full attention on providing our guests a polished, but laid-back, experience.”

The Theorem Vineyards experience can include access to food created by Josh Mitchell, chef/owner of Napa Valley Heritage Catering. Located little more than a mile from the Itkins’ property, Mitchell’s kitchen can provide picnic items and more substantial meals to be eaten at the winery during a tasting.

“What I really appreciate about the entire team at Theorem is that they are all focused on keeping things hyper-local while at the same time expecting the highest quality,” Mitchell said. “It’s also nice to work with a winery that is so close, which makes it convenient to get them and their guests catered food easily. When their garden is in full swing we’ll source from there, too.”

Beyond the grapes from their other properties, eventually the Diamond Mountain compound itself will have roughly 20 acres of vineyards. Currently, however, there are about 9 acres of Cabernet Sauvignon vines with a 1-acre block of Merlot.

The iron-rich, deep red soils and hilly conditions produce a variety of microclimates, each of which has differing views of the valley, including many interesting angles of the distant rocky palisades and Mount St. Helena toward the northeast. Currently, only a few wines are offered for sale at the winery (2016 Hawk’s Prey Cabernet Sauvignon — $95, 147 cases made — and older vintages of the estate cabernet). One wine stood out most as providing a good omen.

The estate cabernet is called Voir Dire, which is a legal term originally referring to the oath taken by jurors “to speak the truth.” The name highlights the couple’s desire to honestly reflect the land’s terroir and also gives a nod to Jason’s career.

The 2015 vintage ($135 per bottle and 155 cases made) reminded me of another Diamond Mountain wine from Hall’s Rainin Vineyard. The 2013 Rainin received a perfect 100-point score from wine critic Robert Parker, and like that wine, the Voir Dire is inky in the glass with garnet edges. The aromas are of ripe red raspberry and black cherry with vanilla and dried tarragon. Thick and rich on the palate, this wine is full of dark chocolate, sweet oak and hints of cinnamon toast. A plush and persistent finish of blueberry and mint complete the experience.

Those visiting the appointment-only winery will pay $75 for a tasting that includes Champagne, a cheese plate and tastes of three to four wines. Picnic items from Napa Valley Heritage Catering can be included for an additional $14 to $22, depending on what’s on the menu for that day, or for $150 guests receive a three-course lunch along with the wine tasting. The tasting fee is waived when at least four bottles are purchased.

How might the couple define success when it comes to their wine country adventure? They both smiled.

“Long-term we’ll know if we’ve done well if our daughter wants to take over the operation someday,” Jason said. “That’s all the success we need.”

Kathleen Ward is the assistant winemaker at Theorem Vineyards.

An aerial view of Theorem Vineyard and Winery, which has sweeping views of the Napa Valley, including the rocky palisades and Mount St. Helena toward the northeast.