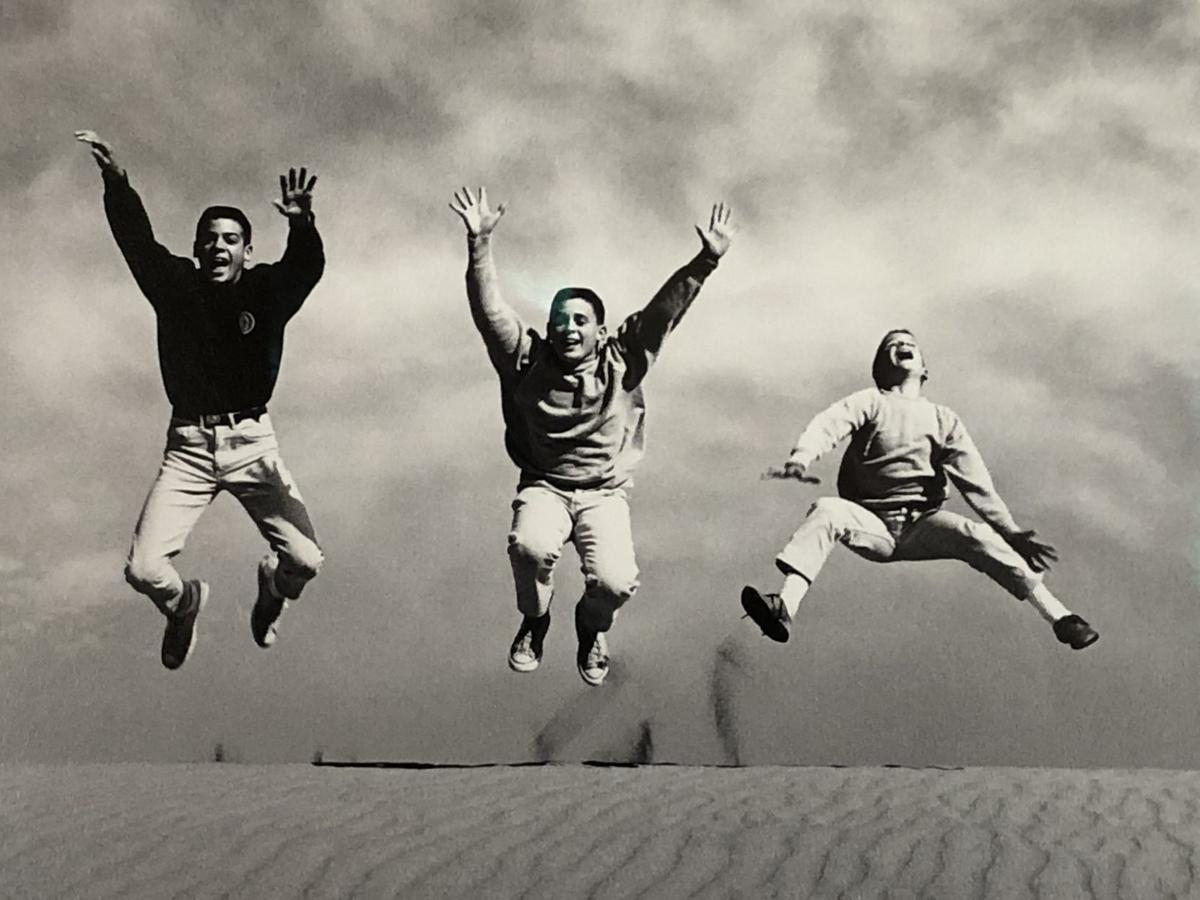 Jack Cakebread took this photo of his three sons in the Mojave Desert in the 1960s. Today, sons Bruce and Dennis are running the winery that Jack and Dolores Cakebread founded in 1972. 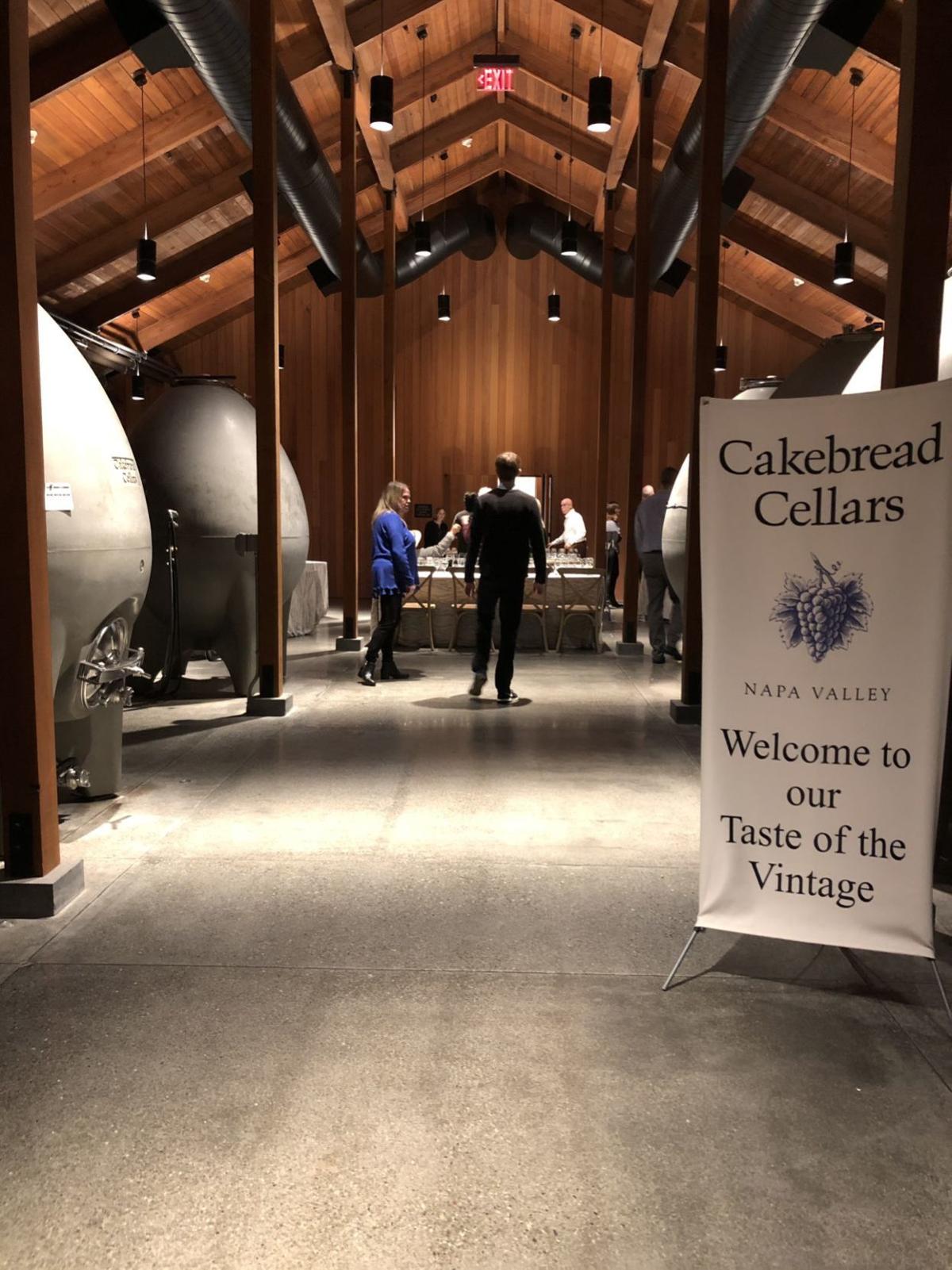 The Redwood Hall is part of the new visitors' center at Cakebread Cellars. 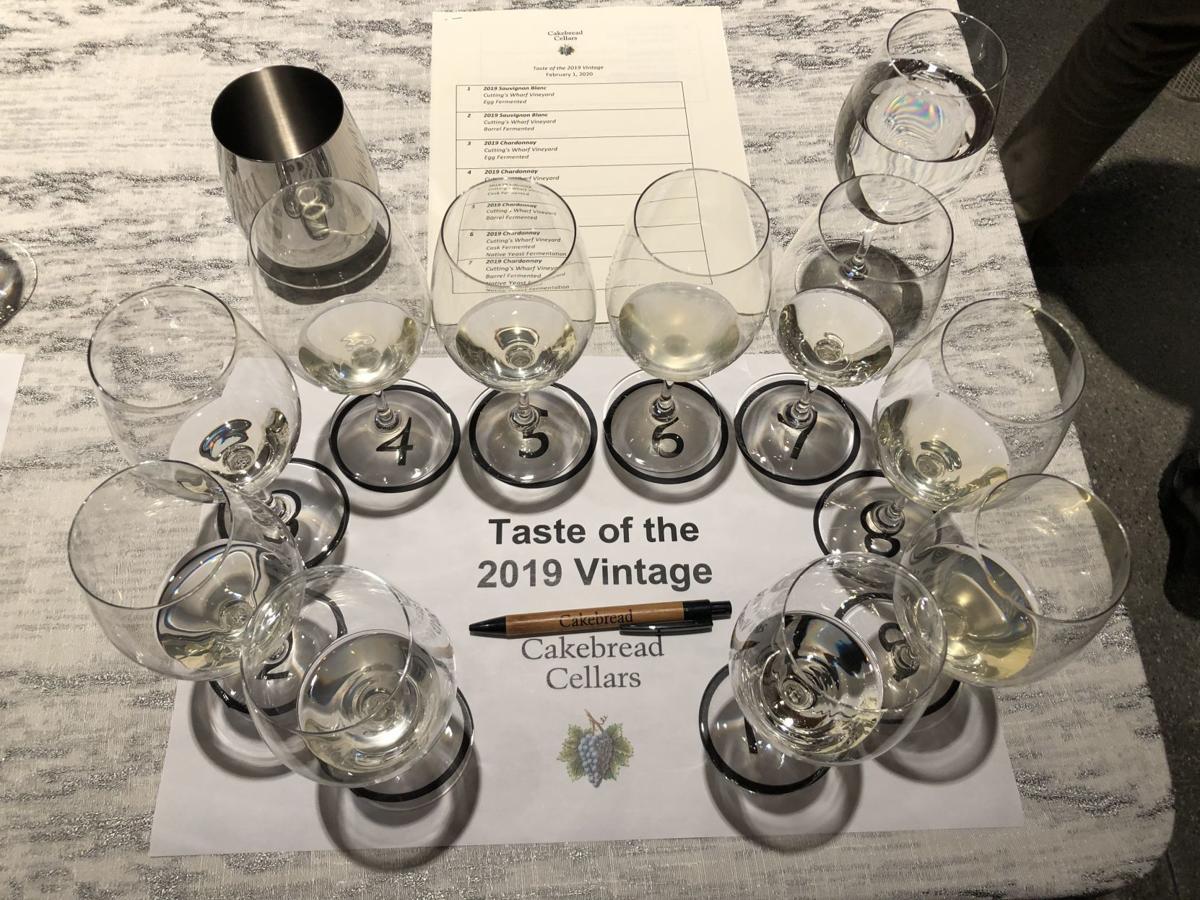 Glasses from the tasting at Cakebread.

From a behind a bouquet of flowers in a redwood hall at Cakebread Cellars, winemaker Stephanie Jacobs, viticulturist Lise Asimont and director of national sales and marketing Katie Griesbeck presented Cakebread Cellars’ 2019 vintage. The yearly event is called “Taste of the Vintage” and happens every January. Griesbeck moderated a discussion where Jacobs and Asimont described how they made the wine.

The hall was part of Cakebread’s recent expansion. It’s called the “nest” because of 12 concrete eggs used to ferment Cakebread’s chardonnay and sauvignon blanc.

The flight was composed of 10 wines, two Sauvignon Blancs and eight Chardonnays, grown in Cakebread’s Cuttings Wharf Vineyard in Carneros. These wines were not the finished product. They are the raw materials into which Jacob will blend the final wine.

Each wine was fermented in a different way and we could see what the different winemaking techniques produced. Some were cask fermented, others barrel fermented, and yet others were fermented in the eggs. Jacobs also experimented with both native and industrial yeasts.

While the fruit element of the wines I found subdued, the aromatics were extraordinary. Honeysuckle and peach came to the nose, with hints of rosemary and thyme.

The tasting culminated in a finished product, the 2018 Chardonnay Reserve, whose fruit characteristics — peaches, apricots — were on full display.

Jacobs has been at Cakebread for 16 years. She was promoted to winemaker when Julianne Laks, who had been at Cakebread since 1986, retired. When Griesbeck asked Jacobs what has changed during that time, Jacobs said, “Our style hasn’t changed. We’ve always made fruit forward, food friendly wines. But how you get to that end product has changed, with all the advances in technology.” Jacobs said in her lab she has machines that can do in four hours what used to take 14.

I asked Jacobs what it’s like to be on an all-women winemaking team in an industry dominated by men. She seemed annoyed by the question saying, “I get that question a lot but the previous winemaker, Julianne Laks, was here for 32 years. Dolores Cakebread has always been at the helm of the company. At Cakebread, it’s always been the right person for the right job.”

There is a natural camaraderie between Jacobs and Asimont. They recall fondly their time at UC Davis in the late 1990s, hanging out in what was then a small department and cooking together. They both share a love of Pinot Noir and are more comfortable in muddy work boots than high heels.

2019 is Asimont’s 21st vintage. She has worked on projects all over Europe in both viticulture and winemaking. “It is a privilege and honor for me to work with Cakebread’s vineyards,” she said. “Each one is so well designed. The perfect variety and the perfect root stock is paired with the perfect soil and the perfect microclimate.”

In the year that she has been at Cakebread, she said her favorite thing so far was a soil study between the Dancing Bear Ranch Vineyard on Howell Mountain, and the recently acquired Suscol Springs Vineyard located east of the Napa River, south of the Coombsville AVA. She found that these two vineyards have the exact same soil type. But their microclimates and proximity to water are completely different.

“As a viticulturist it is very exciting to get the opportunity to observe how, all other variables being the same, climate varies the character of the fruit. It was a very cool study for me,” she said.

Asimont also likes the Suscol Springs Vineyard because it’s one of the most biodiverse places in Cakebread’s portfolio. Mountain lions are routinely sighted there and the vineyard is alive with insects, moles, voles and gophers. It is also home to a mating pair of Golden Eagles, who recently had a fledgling. Together they hunt the moles, voles and gophers.

The Dancing Bear Vineyard is named for an actual bear. Dennis Cakebread noticed that every year a large amount of Merlot that was removed from the vines. Unable to figure out the reason, he set up some motion-activated cameras. They were tripped by a sleuth of bears and in one case, he saw a black bear actually scale a fence so it could get to the fruit. Since then, they affectionately refer to that vineyard as the one with the dancing bears.

Griesbeck said Cakebread Cellars was founded on a lark by Jack and Dolores Cakebread in 1972. Jack was working in his father’s garage in Oakland when Dolores signed him up for a photography workshop with Ansel Adams. He and Adams got on well, so Adams introduced Cakebread to the publishers of a forthcoming book called “A Treasury of American Wine.” They commissioned Cakebread to photograph its Napa Valley portion. In doing that, he met the Sturdivants who owned the 22-acre ranch on Highway 29. After a conversation, Cakebread told them if they ever wanted to sell, he was interested.

By the time he got back to Oakland, the Sturdivants had called ahead telling Dolores they were willing to sell. Jack used his $2,500 photography commission as a down payment on the land where Cakebread Cellars now stands.

Jack and Dolores have three sons: Steve, Bruce and Dennis. Dennis and Bruce inherited the winery from their father and are current co-owners. They recently brought in Mike Jeager as president and CEO.

After the tasting, they served a three-course lunch prepared by Chef Brian Streeter.

The first course was a vol-au-vent, a puff pastry tub filled with delicate maitake mushrooms and served with Cakebread’s exceedingly rich 2013 Chardonnay Reserve.

The second course was a large Liberty Farms duck breast that was unctuous and gamey and set over a endive choucroute, an Alsatian stew similar to sauerkraut. That was served with 2013 Napa Valley Merlot.

And, to finish, rather than a sweet dessert, Streeter prepared a cheese course consisting of Humboldt Fog chevre laced with truffles, Valley Ford’s gruyere-like “Highway One” and a very dry aged cheddar from the Vella Cheese Company, along with dried fruits and crackers. It was composed like an abstract painting. Cakebread’s 2012 Syrah was a perfect compliment.

At 3 p.m., I left the table a little fuzzy. I walked through the gravel courtyard, past a vegetable garden with beets and kale, and a fountain made from rusty wagon wheels, then inside the main reception center.

On the wall were photos taken by Jack Cakebread in the 1960s. A portrait of Adams, bearded and smiling was next to a picture of three boys, suspended in midair above a sand dune in the Mojave Desert. It was Bruce, Dennis and Steve, with their father Jack behind the camera, most likely, at that time, having no idea where they would be or what they would do, 60 years later, in 2020.

For more information about Cakebread Cellars, go to cakebread.com.

Coppola wines served at the Oscars

Sitting on a deck at the Cakebread Dancing Bear Ranch atop Howell Mountain, Bruce Cakebread summed up his experience as a second-generation me…

Napa Green isn't going to rest on its environmental laurels. Expect outreach to the hospitality industry

The Napa Valley Vintners, trade group for the local wine industry, received the state’s highest environmental honor in December for its work t…

TN Cooperage has trained dogs to detect a chemical compound that can ruin the flavor and aroma of wine.

15 Northern California wine, whiskey and beer festivals in March and beyond

Spring is full of events for lovers of wine, whiskey, beer and food.

Jack Cakebread took this photo of his three sons in the Mojave Desert in the 1960s. Today, sons Bruce and Dennis are running the winery that Jack and Dolores Cakebread founded in 1972.

The Redwood Hall is part of the new visitors' center at Cakebread Cellars.

Glasses from the tasting at Cakebread.